İskender, a rebel poet, was often targeted for his sexuality.

Diagnosed with cancer in June 2018, the Turkish poet, Derman İskender Öven, who wrote in the name of Küçük İskender, died on July 2 at the age of 55.

His last year was spent in the intensive care unit of the state hospital in Istanbul. 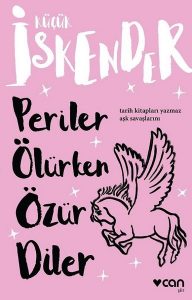 İskender was born in Istanbul in 1964, picked up poetry in childhood, and had three abiding passions: cinema, theatre and poetry. He left his degree midway in the school of medicine from Istanbul University to pursue his passions. Although he has more than 22 books to his name, he is known to have claimed that a poet’s job is to write poems, not books.

İskender was buried on July 3, in Zincirlikuyu Cemetery.

İskender was one of the few openly gay poets in Turkey, and was targeted for his sexuality. His publisher Beatrix Caner calls him a “true rebel”.

In a note on İskender, Berlin’s Haus für Poesie (‘House of Poetry’), a famous literary hub that brings writers from all over the world together, says: “No Turkish poet before him has written such taboo-free poems.”

It is a rare compliment.

The sociologist, Dr. Serdar Taşçı, writes in praise of the poet: “What Pink Floyd meant for world music is similar to what İskender means for Turkish poetry.”

İskender’s poems glisten with sensuous affirmations. In his 1996 poem, ‘Souljam’, described as a poetic equivalent of the play riff in jazz, with repeated phrases acting as a refrain in a song, İskender reveals his

Love, of a not yet visible asia, is
the barely sensible skin of plants.”

The not yet visible continent is imagined in perceptibly alchemic terms, reminiscent of Arthur Rimbaud. In ‘Being Beauteous’ (Illuminations VI), Rimbaud exclaims, “Oh, our bones are clothed with a new amorous body!” The new, the not yet visible, the barely sensible, is the dream of poets who look for a new amorous poetics, often raging against social conventions and censorship.

The poet’s discomfort takes on a larger measure of the giant nature of the problem when İskender writes, in Sevda Akyuz’s translation: “Naturally, I will have a question for the Earth: what is with the arrogance of continents?” There is something naturally overwhelming in our physical predicament as tiny beings, forced to grapple with a large, immoveable landscape. But what İskender is probably pointing his finger at is the political (and racist?) arrogance of continents that plundered other people.

Also read: Poetry, and All the Things it Does

“Civilization is open for debate, but it is unacceptable” writes İskender. It is a rejection of any idea that dwarfs people.

The complaint shifts from the natural to the canonical, when İskender asks, “What would change if people believed in a jazz pianist instead of a prophet?” It is an intriguing provocation or comparison if you like, where İskender pits belief in the canonical with belief in the improvisational, making the distinction between unchangeable and changeable laws of life.

But İskender’s answer to his question is more intriguing and marvellous:

“Then, aliens would come out of hiding for the concert.
The colony would be complete.
We would never run out of booze.
Coincidences would disappear.”

It is tempting to read these lines as a dream of a community of gays who won’t need to hide their love in the closet, in fear, any longer. Romantic coincidence (that André Breton called “objective chance”), a much eulogised idea of lovers coming together, however appears a hindrance for İskender to meeting freely. He would prefer chance to be replaced by vibrant proximity.

The sensuous urgency in İskender is sometimes reminiscent of García Lorca or Rimbaud, but it is perhaps closer to the more simple lucidity one finds in the poetry of the other Spanish gay poet, Luis Cernuda.

“Water is made.
Air is made.
Love is made.
Happiness is an afterthought.”

The sensuous is natural, and within you. Happiness, on the other hand, is simply a construct that is away from you, hence alienating. One may extend the idea to reiterate: The body is natural, the ideal is artificial. For İskender, love is a manifestation of materiality.

Perhaps with the premonition of a death, İskender writes on December 19, 2016, “My only hope is colon cancer and science. Longing for the universe since Jules Verne.”

The famous French writer of science fiction among other genres, Verne believed in natural laws. The premonition intensifies into a desire that seeks company: “As I sip my beer, I pack my suitcase worrying about ‘who is lonely, I must go to them now.’” The physical realisation of solitude yearns to merge into another body of solitude. Love is a merger of solitudes, against the shadow of death.

This shadow of death breaks out of its merely personal spectre and turns into a larger, political metaphor of a sinister shadow looming over lives, when İskender writes:

“No, no. I cannot bear so many memories. I do not want to be remembered like a fascist leader who stays alive and in power by burying the dead.”

It is reminiscent of Cernuda, who also dreamt of vanishing into an absence where “oblivion dwells.”

İskender’s horror of the disproportionate mass of memory is it being reserved for tyrants who commit mass crimes. Such memories are dubiously constructed and against the interests of human life.  On August 1, 2017, he wrote an aphoristic gem of ridicule for the world to ponder over: “Each civilisation’s idol is just Priapos.” Priapos is a god of vegetation, who is depicted as a dwarf with a long member.