This weekend's 'Verse Affairs' looks at the poet's use of crows not only as metaphors but also as the alphabets or graphemes of a new language. 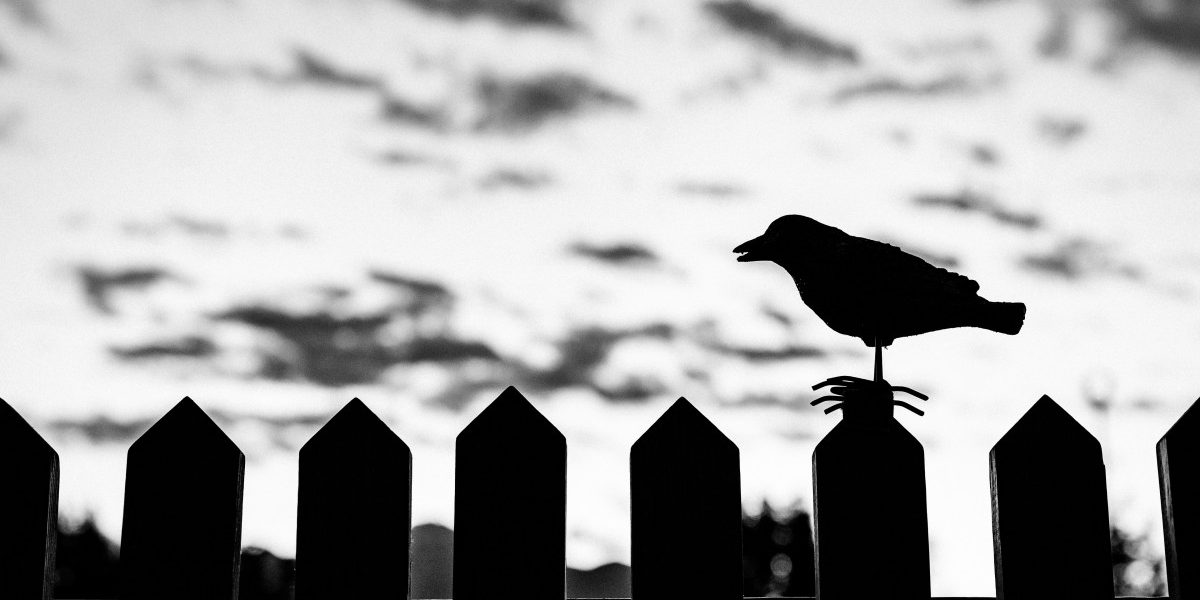 About three-fourth through Nitoo Das’s new collection of poetry, Crowbite (Red River, 2020), we come upon a poem titled, “Waterfall in March, Sohra”. Sohra is another name for Cherrapunji, a town in Meghalaya, and one of the wettest places on earth. But, in this short poem — 18 lines — the waterfall is not what you would expect; it is barely a trickle:

It had reduced to an unresponsive
tear, an indifferent trickle of piss.
Shuddering slowly
out of the cliffs, unsure
whether to wake up or crawl
back into sleep.

June and monsoon are still far away. But Das promises that it will renew itself, “it will grow in all directions, / unpack itself from fear and stumble / recklessly into prophecy”. For those interested in geography, the waterfall the poet is describing is Ka Likai, but it is also a metaphor for poetry itself. From the trickle or lack of inspiration, it will turn into a flood of words. 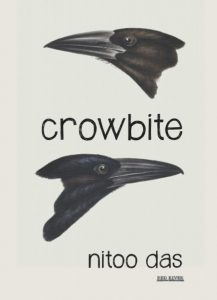 Or crows. Hundreds and thousands of crows circling the skies or covering them up like fish scales of rainclouds. Right in the middle of the book is the title poem — different from the rest of the poems not only in its narrative of a modern fairy tale in the tradition of Angela Carter’s Black Venus, but also through prosody. It is a longish prose poem while all the others in the book are in free verse. The narrative of this poem is located in the matrix of class and caste, but its genealogy can be traced to Ovid’s Metamorphoses. In Book II of Ovid’s poem, the Raven is transformed from white to black by Apollo’s anger. A similar metamorphosis awaits Bhobai — a “lower caste” painter — who, like his father, has an itch to paint crows.

“When I turned twenty-five, crows began to interest me,” he tells the reader. However, painting a crow in an “upper-caste” patron’s house purchases him abuses. “Inside me, I felt the need to draw more crows. …It was a longing I could not control. In fact, I did not want to. Approximately, a year later, I saw the first changes in me, and soon, Bhobai, the man, turned into Bhobai, the crow.” And the crow finds access to places where a human of his caste never would: “I bathed in the sacred river and flew away from their temples before they could throw stones at me.” Bhobai’s crows — drawn by Das, who is also a very talented artist — are all over the book, from cover to cover.

Anyone who knows Das — or, at least, follows her on social media — will know that she is a birder and bird photographer. At an event at the Indraprastha College for Women, New Delhi, in 2018, I had asked Das why “birder” came before “poet” in her author biography at the end of her previous collection, Cyborg Proverbs (Poetrywala, 2018). She had said it was through watching birds that a lot of her intellectual and imaginative endeavours found felicity. Photographs of exotic birds in their bright plumes are all over her timeline and appear frequently in Cyborg Proverbs. In Crowbite, too, an unseen winged creature appears — or eludes us — in “On the Shyness of Birds”:

In that shiver of leaves, a certain
caution lives. It is a thought
as precise as suspicion. Then,
inside the gaps
linking rain and dawn, falls
the sure gasp of song.

But a crow is wholly unexpected — and perhaps, at first glance, the crow is more from the world of Alfred Hitchcock than Aristophanes or Chaucer. The crows in Bhobai’s story or Das’s book are, however, to be understood not only as metaphors for people from a certain caste but also as the alphabets or graphemes of a new language. When someone from Bhobai’s caste learns to paint crows, they also learn the trick of emancipation.

A book about crows cannot escape comparison with Ted Hughes’ Crow (1970). Like Hughes’ book draws from Christian mythology, Das’s one too draws extensively from the mythology of her native Northeast. Some of the poems are shrouded in mystery, like the famous root bridge at Mawlynnong, which inspires an eponymous poem.

A closer cousin to Das’s volume is Sohini Basak’s We Live in the Newness of Small Differences (2018). An entire section in Basak’s book is devoted to birds and indulges in intense mythopoeia. Perhaps poets like Das and Basak find comfort in the flights of shy creatures in this undeniably inclement world.

Uttaran Das Gupta’s novel, Ritual, was published last year. While he rejects the connotations of superiority and inferiority denoted by terms such as “upper caste” and “lower caste”, he has used them since they are widely understood, drawing upon the examples of Dalit writer who also use these terms within quotation marks.