From Red to Saffron, the Literary Journey of Namvar Singh

A fierce controversy is raging in the Hindi literary world at the moment because the Indira Gandhi National Centre for Arts is celebrating his 89th birthday today by launching a series of programmes in his honour. 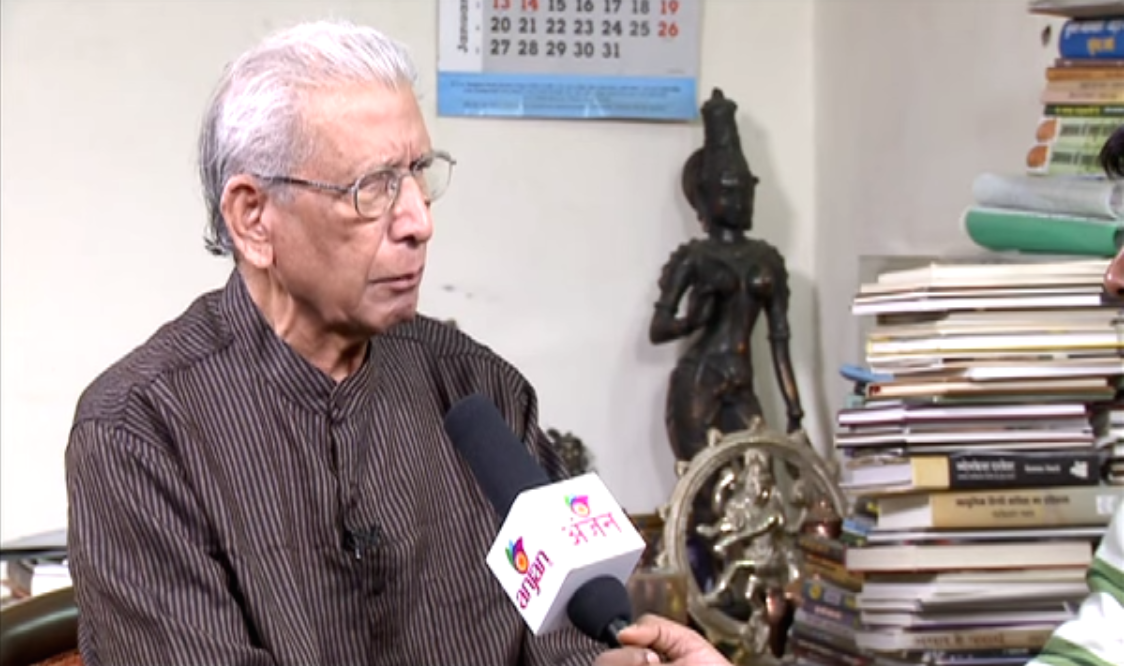 It is not often that an organisation dissociates itself from one of its former presidents just a day before yearlong celebrations to mark the beginning of the 90th year of his eventful life are to start. But the All India Progressive Writers’ Association (AIPWA) did just that by issuing a terse statement on July 27, 2016 distancing itself from the celebrated Hindi literary critic Namvar Singh. Clearly, a Lakshman rekha has been crossed because the AIPWA’s former president, who once contested the Lok Sabha elections as a Communist Party of India (CPI) candidate in 1959 from Chandauli in Uttar Pradesh and was the editor of the party’s daily Janyug during the mid-1960s, is considered a living legend in the Hindi literary world.

So what exactly has Namvar Singh done to prompt progressive writers to declare that they are no longer responsible for him?

A fierce controversy is raging in the Hindi literary world at the moment because the Indira Gandhi National Centre for Arts (IGNCA) is celebrating his 89th birthday today by launching a series of programmes in his honour. Union home minister Rajnath Singh and culture minister Mahesh Sharma are attending the function, which has been organised by Ram Bahadur Rai, the veteran RSS activist and senior journalist who now heads the IGNCA.

Even in his heyday, Namvar Singh was never known for his intellectual consistency although he has always been admired for his razor sharp mind, formidable intellect, vast erudition and argumentative skills. When he began writing in the early 1950s, the Hindi world took immediate notice of a new talent because notwithstanding his Marxist ideas and communist politics, he displayed a freshness of approach, keen critical insight and sensitivity for the ‘literariness’ of a work. He quickly emerged as a powerful voice who could make or break literary reputations. It was his analytical article on Nirmal Verma’s short story ‘Parinde’ (Birds) that firmly established Verma as a noteworthy writer. The credit of placing Muktibodh at the centre of Hindi poetry in the 1960s goes primarily to Namvar Singh, and this list is pretty long.

He also earned a formidable reputation as an excellent teacher who was able to explain the most complex literary and philosophical concepts and theories in such a lucid manner that even an average student could understand them. Not many in the Hindi world are as familiar with current international intellectual trends as he is. And he is without doubt a brilliant speaker in Hindi, using wit, sarcasm, scholarship, Urdu couplets and Sanskrit verses to mesmerise his audience.

And yet, for the past few decades, he has been admired but not loved or respected. Invited to speak at events all over the country, Namvar Singh has become notorious for playing to the gallery – saying one thing one day only to contradict it the very next day.

When writers, intellectuals and artistes such as Krishna Sobti, M. K. Raina, Uday Prakash and others were protesting the growing intolerance in the country by returning awards given by the government and its institutions, Namvar Singh criticised them as “headline hunters”. It’s another matter that his younger brother – the well-known fiction writer – Kashinath Singh too had joined the ranks of the protestors.

The truth is that long ago, Namvar Singh gave up his search for ‘satya’ (truth) and started chasing ‘satta’ (power). Perhaps, it was a reaction to long years of poverty, suffering and struggle. His services were terminated at the Banaras Hindu University and Sagar University primarily because of his communist activities. In Delhi, he spent many years on a shoestring budget. His fortunes turned only when V. V. John, who was vice-chancellor of Jodhpur University, invited him to become a professor in the Hindi department. He later became the first chairman of JNU’s Centre of Indian Languages.

In October 1987, he wrote an article in the literary magazine Hans making a ferocious attack on the demand to declare Urdu as the “second official language” of Uttar Pradesh, as Bihar had already accorded it this status. He dubbed the demand as “Urdu jihad” and identified the language with the Muslim community, reminding readers of the role played by it in the creation of Pakistan. His fascination for proximity with powerful politicians was evident when he attended a book release function of V. P. Singh’s collection of poems at the former prime minister’s residence and sang paeans in praise of his poetry. And, much to the shock of his audience, he described him as a modern-day Bhartrihari.

At a seminar held in August 1995 at the India International Centre to discuss the crisis of ideas in the Hindi-speaking region, historian Shahid Amin made a suggestion that efforts should be made to lessen the gap between Hindi and Urdu. In his remarks, Namvar Singh took up cudgels against him and had no compunction in lending his whole-hearted approval to the slogan of “Hindi-Hindu-Hindustan” while uncritically invoking the names of some prominent 19th century Hindi litterateurs like Pratap Narain Mishra. He also placed considerable emphasis on the need to recognise that Hindus and Muslims are different not only in terms of religion, but that they also represented two distinctly different cultures, languages and nationalities (‘qaums‘). In other words, he viewed the crisis of ideas in the Hindi-speaking region as stemming from the inability of the intelligentsia to assimilate a communal approach to the language question.

However, not known for his intellectual consistency, the same Namvar Singh delivered the Zakir Husain Memorial Lecture in 2001 and said things that went completely against the grain of his 1987 and 1995 arguments against Urdu.

As chairman of Raja Rammohun Roy Foundation, Namvar Singh came under a cloud when CPM MP Malini Bhattacharya wrote a letter on November 10, 1994 to the then Union human resource development minister Arjun Singh levelling serious charges and listing numerous irregularities allegedly committed by the chairman. One of the charges was related to the change of rules concerning purchase of books to favour certain Hindi publishers.

Arjun Singh showed unusual alacrity in acting upon the complaint and ordered the setting up of a committee to enquire into the affairs of the foundation. Though its report was to be submitted by January 31, 1995, the convenor failed to officially constitute the committee. When newspapers pursued the case, some movement was made but the matter was pushed under the carpet and the enquiry met with the same fate as such enquiries often do in our country.

Singh also had no problem in lavishing laudatory comments on the poetry of Mridula Sinha, head of the BJP’s women’s wing, when her book was released. Not only that, when controversial Bihar politician Pappu Yadav’s autobiography was published, he not only spoke at the function but also went to the extent of saluting him.

While his erstwhile comrades continued to put up with his intellectual peregrinations, all the indications were there that Namvar Singh was shifting his political stance. When his term as AIPWA president ended in 2012, Singh did not attend a single meeting of the organisation and kept himself totally aloof from its activities. As he enters the 90th year of his life, the former communist and Marxist critic is exactly where he wants to be  – feted by the establishment.