While 'Reopening Muslim Minds' is a powerhouse of incredible research work, it also gets many things wrong.

In the past century, we have seen the emergence of a wealth of discourse about Islam and Muslims. That’s because as colonialism retreated across the Islamic world, what followed was a slow eruption of nascent political movements that sought to reorient the power politics in their native countries in the direction of Islam.

By the turn of the 20th century, many of these political movements metastasised into more gruesome forms. Take, for example, the Taliban, which chops off limbs as a punishment for theft as it zealously imposes its own interpretation of Islamic law; or the Iranian regime, whose legal stipulations are hardly more liberal than the Taliban’s.

In the larger context of debates surrounding modernity and democracy, these power struggles and the historical legacies that animate them have come under intense criticism. And at the heart of these critical debates is the role of the faith system that 1.9 billion individuals practice worldwide.

A provocative new book, Reopening Muslim Minds: A Return to Reason, Freedom, and Tolerance by Turkish scholar Mustafa Akyol attempts to both figure out and rehabilitate all that is wrong with the Muslim world today. But unlike similar, previous initiatives, Akyol stops short of declaring Islam as a ‘problem’. Instead, he identifies Muslims’ approach to Islam as the one responsible for the current political pathologies plaguing Islamic lands. 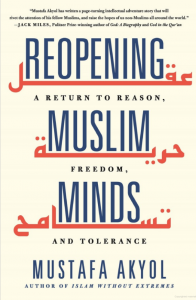 Akyol locates the origin of the current troubles in the formative years of Islam, when serious philosophical debates raged about the meanings and import of “true” Islam.

One faction debated that the fate of individuals was predestined and that right or wrong was already foretold by the revelation (that is to say, Quran).

Arrayed against this orthodox sect were Muslim philosophers who championed the supremacy of reason. They argued that the individual was a free agent who enjoyed free will and that it is ‘reason’, not the revelation alone, that determines right or wrong.

These contestations hardened Muslim attitudes along with two competing theological schools: Asharism and Mu’tazilah. While Asharites preferred adherence to tradition, Mu’tazalites had a penchant for going beyond the revered conventions.

Mu’tazalites were passionate about philosophy and helped evolve the rich tradition of kalam. They were the exponents of a particular reading of the Quran that upheld free will and reason.

Mankdim Shashdiw, a Mu’tazalite scholar, for instance, wrote a treatise saying God was bound by the constraints of justice. “He does not impose on people obligations that they can’t bear nor have knowledge of,” he declared.

In their view, the Quran was a created document and did not co-exist eternally with God “for such thing would undermine Islam’s emphasis on monotheism.”

They argued that morality was subject to human reason and, therefore, can exist independent of the Quran. This bent of mind predisposed adherents of Mu’tazila to an ethos of fearless reasoning and free inquiry.

Thus, it goes without saying that as speculative traditions flourished in Muslim societies, Islam saw the surge of its ‘Enlightenment’ period.

Al-Jahiz (d. 868), a Mu’tazila scholar, wrote the Kitab al-Hayawan (Book of Animals) that not only describes more than 350 species with beautiful illustrations, but also argues that animals “engage in a struggle for existence,” and “develop new characteristics … transforming into new species.” He is considered a forebear of the modern theory of evolution.

Ibn al-Haytham wrote Kitab al Manazir (Book of Optics) in 1021, which was first to explain that vision occurs when light deflects off an object and then passes into one’s eye.

Spain-born Ibn Baja’s treatises on astronomy were so significant that in 2009, the International Astronomical Union gave his name to a crater on the Moon.

In 2018, Google, through its ‘doodle’ celebrated the 1,038th birthday of Ibn Sina, another avant-garde philosopher of Islamic Enlightenment who authored at least 131 books, including Al Qanun fil-Tibb (the Canon of Medicine), a monumental medical encyclopaedia that was translated into Latin in the 12th century and used as the primary text for European medical courses until the 17th century.

Also read: Sci-Fi and Speculative Fiction in the Muslim Tradition

But the most towering advocate of Islam’s speculative tradition was Ibn Rushd, a Cordova-born polymath-jurist.

As Akyol writes, “Ibn Rushd realised that if we lose faith in objective reality, we would also lose reason. And if we lost reason, we would end up believing in a despotic God whose wisdom cannot be understood, let alone be interpreted.”

In books like The Distinguished Jurist’s Primer, Rushd went beyond traditional approaches followed in the four Sunni jurisprudence: Maliki, Shafi’i, Hanafi and Hanbali, which form the basis for Islamic Sharia. Instead of anachronistically reproducing stipulations from Prophet Muhammad’s time to address the problems in his own period, Rushd “went back to original sources,” Akyol writes, “especially in Qur’an to create more room for interpretation.”

Rushd argued that objective values were established by sunan ghayr maktuba (unwritten laws) and if they contracted the written law, that is the Sharia, the latter will have to be reinterpreted.

Written laws, he said, were contextual to the time and values for which they were revealed and may become unjust in a different setting and that is because “no one can lay down universal and general laws according to all people of all times and all places.”

But after a brief heyday, the tradition of kalam suffered a terminal decline among the Sunnis, “following which jurisprudence became the primary discipline. As a result,” writes Akyol, “Islamic culture became a ‘legal culture’, focusing on ‘proper behaviour’ rather than proper belief.”

But the biggest casualty of the suppression of Islam’s speculative tradition was a ‘Muslim mind’ which shut itself off to ‘ijtihad’ (independent reasoning), allowing ‘over-inclusive scripturalism’ to dominate the Islamic world, turning even trivial questions into religious problems. Muslims began to worry about things like, “Should one wear one’s wrist-watch on the right or the left wrist?”

Asharite theologians like Imam al-Ghazali, who wrote Revival of the Religious Sciences, instructed Muslims to avoid sinfulness through acts like “breaking musical instruments, spilling over wine and snatching silk garment from hewho is wearing it,” because Silk seemed “indulgent.”

Ghazali played a paramount role in marginalising Islam’s speculative philosophy. Ibn Taymiyya, another adversary of kalam, in his treatise The Unsheathed Sword calls upon Muslims to kill “anyone who insulted the Prophet, even if he repented,” although Qur’an actually prescribes no such punishment.

Contrast this with the sage counsels of Abu Hanifa, grandson of Caliph Ali who founded Hanafi jurisprudence. “We do not consider anyone to be an infidel on account of sin,” he wrote, “nor do we deny his faith.”

Abu Hanifa, whose rational philosophy survives to this day, made a crucial distinction between faith (din) and law (Sharia). All prophets brought the same religion, he argued, but promulgated different laws. One would not abandon religion by abandoning the law.

So what led to the decline of the Islamic Enlightenment? One theory is that at one point, Abbasid rulers of the Muslim world reversed patronage to the Mu’tazilah school which led to the entrenchment of power by the traditionalists whose conservative messaging only got stronger as Islam faced persecution at the hands of Mongols and Crusaders.

Under the Seljuk and Mamluk Sultanates, Asharism became the dominant ideology, culminating in the total marginalisation of Mu’tazilah. State persecution is also responsible.

In 1017, Mu’tazilah scholars were directed to publicly renounce their “heresies” and warned of corporal punishments. Some were persecuted, their works burned publicly.

In a world where political actors like the Taliban and Boko Haram weaponise Islamic tenets to legitimise and perpetrate violence, and where countries like Turkey and Malaysia are quick to shut down speech and penalise blasphemy and heresy, Reopening Muslim Minds sheds light on the lost theological tradition of Islam that had once cultivated a spirit of tolerance, moderation and free inquiry, now unseen in much of the Muslim world.

The book demonstrates the ways in which that forgotten tradition can be revived and repurposed to inspire an ‘Islamic Renaissance’.

But, as with every other discourse on this subject, Akyol’s book also becomes a vector for dangerous tropes about Islam and Muslims because it exceptionalises the Muslim right-wing. It becomes part of that broader narrative that stigmatises every conservative expression in Muslim societies as proof of the universal Muslim pathology.

After all, there are no pressing debates that prescribe restorative treatment for European culture amid the rising wave of intolerance towards Muslim immigrants and their lifestyle; no calls for the reformation of the Hindu religion as India struggles with escalating ethno-religious chauvinism.

On the contrary, these changes are rightly interpreted through the prism of drastic political and economic shifts.

The ‘closure-of-the-Muslim-mind’ argument posits that Muslim people are victims of great intellectual crises that transcend time and culture, and of which figures like Ibn Hanbal, Ibn Taymiyyah, al-Ghazali and Sayyid Qutb are manifest examples, thus establishing a mutual connection between them.

It is at this point that the discourse becomes dangerous because Akyol is trying to excise all these individuals away from the broader temporal context which may be quite unique to their time.

For example, John C. Calvert, among the foremost scholars on Sayyid Qutb, traces the iconic Egyptian Islamist ideologue’s history from being a disciple of liberal polymath Mahmoud al Aqqad to becoming a radical thinker who endorsed violence. Calvert ascribes Qutb’s radical shift to the circumstances peculiar to British-administered Egypt and the ruthless repression by Gamal Abdel Nasser.

Likewise, Akyol puts the blame for the decline of the speculative tradition in Islam, for the most part, on the Muslim rulers who used Ashari doctrines to preserve political power.

This is at variance with what is written in his previous book, Islam Without Extremes, where this decline is being attributed not to “the attitudes and ideologies inherent in Islam,” but to the economic stagnation brought by the “political position of merchant classes vis-a-vis the dominant military-bureaucratic classes in Islamic societies.”

Similarly, Akyol argues that Muslims see an affinity with fellow Muslims because a bulk of Sunni tradition was defined by a “communalistic school,” whose theological basis was Asharism. But in The Idea of the Muslim World, scholar Cemil Aydin gives different reasons for why Muslims came to evolve a communitarian view of self-identity in the 19th century, none of which has anything to do with Asharism.

Most crucially, some of Akyol’s assertions are based on the premise that there is a straightforward relationship between religious beliefs and individual behaviour. But this is a view with which several scholars have disagreed.

And as Edward Said writes in Covering Islam, “…for Muslims as for non-Muslims, Islam is an objective and also subjective fact because people create that fact in their faith. This is to say that media’s Islam, Western reporter’s Islam and Muslim’s Islam, are all acts of will and interpretation that take place in history.”

It means that religion or religious attitudes don’t influence us as much as we shape them to our liking, based on the social, political and economic imperatives with which we interact. Reopening Muslim Minds is thus a powerhouse of incredible research work, but it also gets many things wrong.