A Poem by a Daughter to Her Mother

'Will the umbilical cord be cut now, at last? Has the doctor finally arrived?' 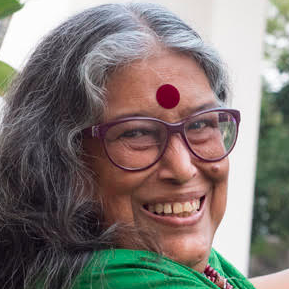 The following poem, from Acrobat (Juggernaut Books, 2022), has been translated from Bengali by Nandana Sen.

guarding the hidden treasures of half a century
her two clenched hands hold in their grasp
the unconditional promise of asylum.
After all these years, the knot is loosening.

Released from the ties,

one will pass over to the other side,
leaving the other a prisoner on this.

From the moment of birth,
the auspicious exchange of glances

sealed the bond.
That ever familiar face

grows gradually indistinct.
A light from beyond

flashes upon it, changing its pallor,
as the vortex of pain

spins into a mighty whirlwind, pulling into its twist

Will the umbilical cord be cut now, at last?
Has the doctor finally arrived?

Nabaneeta Dev Sen (1938 – 2019) remains one of the most beloved, versatile and prolific Bengali writers of all time. Equally expressive in poetry and prose, fiction and non-fiction, she has over one hundred books to her credit, including compilations of poems, novels, plays, stories, memoirs, academic essays, children’s literature, political columns, literary translations, and multiple volumes of her collected works. Her mother was the poet Radharani Devi.

Nandana Sen is a writer, actor and child-rights activist. She is the author of six children’s books, translated into more than 15 languages globally. She is Nabaneeta Dev Sen’s daughter.