The book, credited to a 'Berozgar Bhakt', exited the e-commerce platform Amazon after a two-day stint in which it garnered several glowing reviews. 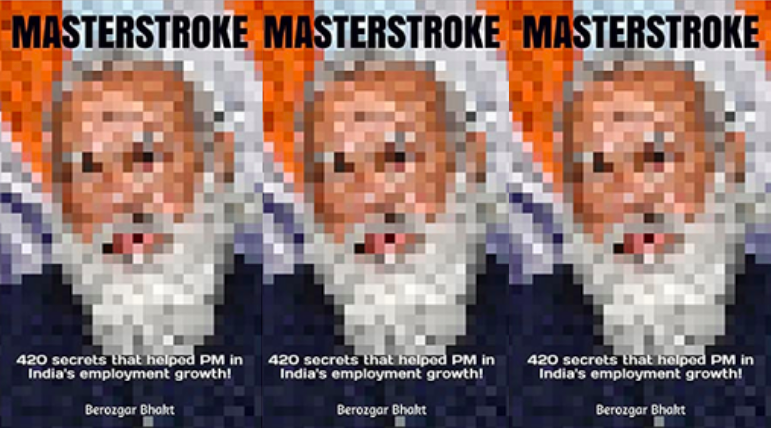 The cover of the book, as on Amazon.

New Delhi: A 56-page satirical e-book on Prime Minister Narendra Modi, being sold through e-commerce platform Amazon, was taken down late on Tuesday, May 25, but not before it led to some chuckles online.

It is not clear whether Amazon itself took the decision to remove the book or whether the publisher-author deleted it. It is possible to self publish books through the platform.

Of the many distinguishing factors of the book was that it was entirely blank.

Published on May 23, the book is called MASTERSTROKE: 420 secrets that helped PM in India’s employment growth!. Its author has the pseudonym ‘Berozgar Bhakt’. The Hindi berozgar means ‘unemployed’ and Bhakt is a slang term used for supporters of the rightwing government and parties in India.

An archived version of the page selling the book can be found here. A screenshot of the page selling the book on Amazon.

Users on social media had cracked jokes on the book’s sustained presence on the e-commerce site.

Looks like Amazon is going to shut soon in India.
Someone has published a book on Amazon titled Masterstroke. It has all blank pages 😂😂😂😂 pic.twitter.com/Y5vybkBFik

The original description added to the book by its ‘author’, ran thus:

“Nation wants to know what Modi ji did to increase employment opportunities for India! How a great leader helped a struggling nation to emerge glorious in the war against COVID-19 and walk down the path of prosperity.

“This book has all the things Indian Prime Minister Modi did to increase employment among the Indian citizens.”

The Wire was able to independently able to confirm that the book had no contents beyond the cover. It was priced at Rs 56 and had as many pages, in an ostensible reference to BJP’s repeated claims that the prime minister’s “56-inch chest” is a source of strength and courage for India.

Of late, Modi and his government have come in the face of severe criticism in the light of the Centre’s handling of the COVID-19 crisis, India’s unplanned vaccination drive and the hugely expensive Central Vista project which was greenlit amidst the crisis.

Unemployment, particularly, has been at an all time high.

While the exuberant title of the book alone was a giveaway that it was perhaps not true to the sentiments directly conveyed by the words on the cover page – ‘420’ is the section of the Indian Penal Code for cheating – hundreds of reviewers also wrote dedicated comments maintaining the same strain of deadpan humour. 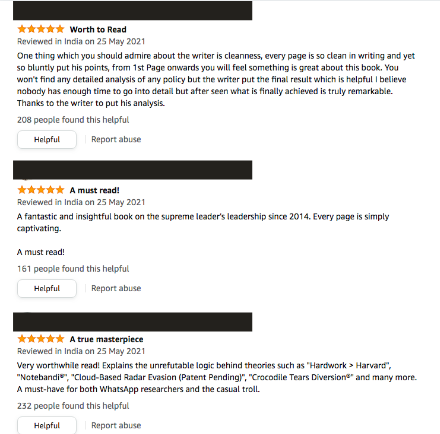 Reviewers comments on the book on Amazon. The Wire has blurred users’ names to protect their identity.

“Amazing document that shows the ability of the man in the cover pic. Well documented achievements. 7 years of achievements chronologically documented with the strategies used,” a commenter wrote.

“Masterful, fluently explains the steps taken by our Honorable PM and how hard he worked to increase employment opportunities for his fellow countrymen, must read,” wrote another.

As many as 94% of the 140 global ratings that the book received were five stars.