Book Review: The Constitution as Pedagogy

According to Madhav Khosla, the constitution's great purpose is to teach successive generations of Indians the value of democracy. Group photograph of members of the Constituent Assembly of India (Legislative), 1949.

The Gazette of India, Extraordinary on January 28, 1950 published a Ministry of Law notification announcing the appointment of ‘Shri Motilal Chimanlal Setalvad, Advocate, to be the Attorney-General of India with effect from 26th January, 1950’. To rub in the draftsman’s disapproval of the constitutional phraseology ‘Attorney-General for India’, the notification repeats ‘Attorney-General of India’ a second time. Setalvad is to receive a monthly retainer of Rs 4,000 and an office allowance of Rs 35. The services of a personal assistance and a jamadar are assured, free of cost, by the government. Should the Attorney-General appear in a high court, a daily fee of 60 gold mohurs would be paid on the days of his absence from ‘headquarters’ at New Delhi. (Applying the prevailing measure of equivalence, a practice that continues to this day at the Bombay high court, 60 gold mohurs works out to Rs 900.)

Madhav Khosla’s study, compact in size and majestic in sweep, ends where the task of Attorney-General Setalvad, India’s constitutional courts and the cohorts of lawyers assisting them, began. What do these words in the constitution mean? Why are they put here? These questions continue to arise in the daily bustle of interpreting the articles of the constitution and the answers our judges provide recalibrate the individual’s relationship with the state and define the pathways of governance. Published at the eve of seven decades of working the constitution, Founding Moment draws open the curtain on the contestations that birthed our national charter. It does so with elegance and optimism. 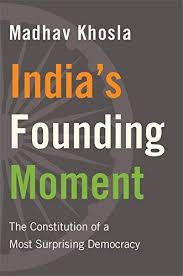 The constitutional project was fraught, not merely because of the weight of the enterprise but because of its daring vision – creating a system of democratic governance in a society mired by poverty, illiteracy, a rigid caste structure and an unbridled preference to lean on traditions over modernity. The challenge before the founders was to draft a charter that would capture and nurture the democratic impulse and forge a social contract that would tap into the genius of Indians and India.

Competing visions of India, not just alternative phraseology, vied for dominance: Should the new nation revive the political autonomy of the Indian village as the basic political building block? Should judges be conferred jurisdiction to test a law on the ground of substantive due process? Should the federation have a strong centre? Which facets of individual identity should the constitution recognise and to which facets of identity would the constitution be blind? Khosla explains these contests by identifying the main proponents of each view, draws on their speeches and writings to lend an authentic voice to the debate, and then weighs in with a conclusion at the end of each chapter. His analysis is divided into three carefully named parts: The Grammar of Constitutionalism; The Location of Power; and Identity and Representation. Indeed, the fluent prose conceals the enormous rigour and care that informs the analysis.

While risk taking is inherent to any foundational exercise, the challenge before the Constituent Assembly was about reposing trust. Do we trust an illiterate citizenry? How much should we trust the legislature? How far can we trust our judges? While a system of checks and balances is premised on creating multiple power centres without conferring too much power on any particular set of functionaries, this theoretical framework had to be operationalised. The constitution project was about imagining democratic institutions and entrusting them with the levers of power which when wielded reasonably, would facilitate the social, economic and political transformation promised by independence and self rule.

Khosla views the constitution as a teaching tool. It does much more than provide a scaffolding for a new nation state. Its great purpose is to teach successive generations of Indians the value of democracy, nothing less, and to provide an architecture where democracy could thrive. The constitution is a textbook of liberties and limits; roles and responsibilities; principles and precept. It is a vast lattice work of boundaries, corridors and connections to be studied by citizens, officials, judges, decision-makers in government and the legislature, through which the values of democracy are learnt.

The author persuasively asserts: ‘It would be an instrument of political education – aspiring to nothing short of building a new civic culture’; ‘The codification of the directive principles would expose both the ruler and the ruled to the proper exercise of power. The pedagogical promise of the Constitution would thus be furthered, for directive principles would have…“an educative value”’; and that the Constitution would work as ‘a pedagogical apparatus that can bring into being a certain kind of citizen.’ Perhaps the low entry barrier to securing an education in the law has complimented this constitutional mission. Lawyers in India constitute a vast army of foot soldiers spreading constitutional values through Bar rooms, meetings, family discussions and the myriad ways in which argumentative Indians engage.

A distinct feature of Khosla’s study is the distance it maintains from the legal practitioner’s universe. There are no homilies from Supreme Court’s decisions and as far as I could tell, no references to the criticism by H.M. Seervai or the scholarship of Durga Das Basu. (In a faint nod to my tribe, a lecture delivered by Seervai on ‘The Position of the Judiciary under the Constitution of India’ is acknowledged at footnote 83 at page 169.) Khosla rejects received wisdom and by threading together original sources, reconstructs the founding contests.

Khosla’s book is short on lament and resolute on pointing the way: ‘What ultimately determines the success of any constitutional project is not the creation of rules but their reception.’ Sachchidananda Sinha, provisional chairman to the Constituent Assembly in his inaugural address on December 9, 1946 quoted the American judge Joseph Story:

‘The structure has been erected by architects of consummate skill and fidelity; its foundations are solid; its compartments are beautiful as well as useful; its arrangements are full of wisdom and order; and its defences are impregnable from without. It has been reared for immortality, if the work of man may justly aspire to such a title. It may, nevertheless, perish in an hour by the folly, or corruption, or negligence of its only keepers, THE PEOPLE. Republics are created – these are the words which I commend to you for your consideration – by the virtue, public spirit, and intelligence of the citizens. They fall, when the wise are banished from the public councils, because they dare to be honest, and the profligate are rewarded, because they flatter the people, in order to betray them.’

The shelf of outstanding scholarship on the Indian constitution is thinly populated. Madhav Khosla’s Founding Moment joins a handful of companions on this shelf.

Shyam Divan is a senior advocate.