How Asurs Became the Fallen 'Lords of the Global Village'

Ranendra's 'Lords of the Global Village' tries to account for the Asur tribes and their culture, which has been subsumed under the apathy of a “self-proclaimed and tolerant Indian culture”. 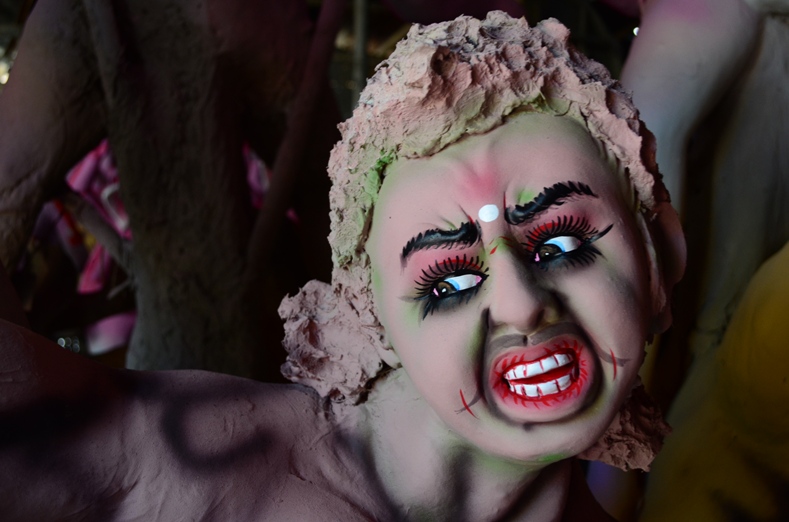 A clay idol of Mahishasur, the tribal deity who is defeated by Durga. Credit: Reuters/Files

Asur, as far back as I can remember, meant “demon”. That has been fed into my mind ever since I was a child, as, I am sure, has been the case with most children growing up in Indian cities. That is mythology. There is a reality too, wrapped in that mythology, of a tribe in Jharkhand called the Asur, who claim descent from the “monster” Mahishasur, who was vanquished after a battle with the Goddess Durga, a battle that lasted for nine days.

The battle over the Asur continues – Smriti Irani, as minister of human resource development, held forth about an event held in JNU that celebrated Mahishasur Martyrdom Day. She called the entire activity the result of a “depraved mentality”. Her use of the word “depraved,” I think, sums up the outlook most urban Indians would perhaps have of the mythical figure and, by extension, of those who claim their ancestry to him.

The rural, educated individual too falls victim to this prejudice. Take the case of Master Sahib – the narrator of Lords of the Global Village – who after a period of seemingly prolonged unemployment is granted a job. But he isn’t sure whether that should send him into “the throes of ecstasy” or whether it should “depress” him. It is the latter, as it turns out, for the job requires him to go to rural Jharkhand, near the spread of bauxite mines and the mythical world that the Asur inhabit.

The idea of going into the interior of a state discomforts our teacher, for it is not just the rural, but it is the “exotic” and “dangerous” tribal land that our teacher is expected to enter and make his own. Contrary to the bias that the reader and the teacher’s apprehensions about the tribals and their land come naturally, these apprehensions are based not on experience, but on constructed stereotypes. The place that they exist in therefore becomes “damned miserable.” Bhaunrapaat, the location of the girl’s school where our Master Sahib is supposed to teach, drives him “to despair.”

Master Sahib’s constructed ideas – such as his idea of the Asurs as “dark-skinned giants with protruding teeth and horns growing out of their heads,” – are also our ideas. Perhaps our ideas are not necessarily about the Asurs. Perhaps, they are about that region we are told not to venture into because a particular set of people from a particular class in society live there, and our imagined identities about them – our othering of those identities – make us dread going to that place. But make no mistake, that makes us Master Sahibs too, if only of different hues.

The fact that Ranendra manages to personalise the experience of his protagonist for the reader in such a subtle manner – and that’s before page 10 has been turned – is the biggest strength of Lords of the Global Village. First published in Hindi in 2010, and now translated by Rajesh Kumar for Speaking Tiger Books, Ranendra’s novel is helpful in demystifying the place of the Asurs from popular narrative woven around them and rescuing their story from the annals of prejudice. As we go further into the book, Master Sahib encounters and gets comfortable with an increasing number of characters. In the bustle of these tribal folks, our teacher finds a place, and his discomfort with the location disappears. He locates the true identity of the Asurs and he realises the business of deliberate and conscious misconstruction of identities that our society has long indulged in. 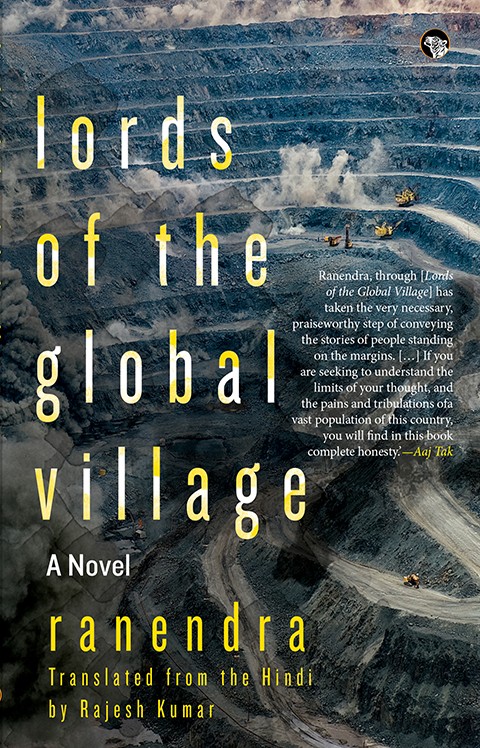 When Master Sahib mentions this to Rumjhum, one of the Asurs, she explains that “in the ancient Assyrian-Babylonian civilisation, ‘Asur’ meant ‘a strong man’… around 150 shlokas in the Rigveda treat the Asurs as gods. Mitra, Varun, Agni, Rudra – all of them are called Asur. Later on the meaning shifted and the Asurs began to be equated with demons.” He draws parallels between the mythical stories of other countries and India, and those of the Asurs. “The struggle between Surs (gods) and Asurs (demons) is a complex riddle,” Rumjhum concludes, which is why he studies Sanskrit, to understand the beginning of this sidelining and demonising of his community.

In his quest to understand this struggle and solve that riddle, it becomes necessary for Ranendra to periodically dive into the histories of the Asurs. He switches over to a style that informs more than it narrates — and ends up doing that more often than he probably should. The shadow of docu-fiction looms large. This is not necessarily a problem since the writer here is trying to provide an account of the existence of the Asurs, which has been wiped out in large parts due to apathy of the “self-proclaimed and tolerant Indian culture.”

“Perhaps,” Master Sahib fumes, “mainstream civilisation had persuaded itself of the need to consume them [the Asurs] utterly.” He is disappointed and disgusted by the fact that the “Americans were generous enough to preserve the literature and ruins of the Incas, the Mayans… in a number of museums” but that the Asurs, on the other hand, haven’t been granted even that much space and that they have “no literature, no history and no museum” while living a life “sans culture, sans language, sans literature, sans religion.”

One understands that the teacher’s anger stems in parts because of the guilt of his earlier ignorance towards the Asurs, and the feeling of shame that he felt at being a victim of the society’s constructed patterns. This little episode within the novel itself provides ample justification for Ranendra’s constant veering towards including incidents from the mythology and the history of the Asurs, thus putting them on a canvas where their identity is backed by culture, by myths, by stories, by shared geographies, languages and catastrophes. It makes the Asur identity one that is divorced from the culture of demonising it has been subjected to.

In between the narration of Master Sahib’s story, his contact with the Asurs and their myths and legends, Ranendra also draws parallels between the history of Native Americans and the history of India’s tribal folks, a comparison that underlines shameful marginalisation backed by deliberate destruction of identities. For instance, after a particularly gruesome murder – actually a human sacrifice – Master Sahib is reminded of the “Incas, Mayans, Aztecs and the hundreds of Native Americans from Western history.” Much like the Asurs “they, too, had been driven away and decimated…”

Ranendra’s references to Native American history and the premise of his book evoke a connection to Mario Vargas Llosa’s masterpiece, Death in the Andes. The novel shares a similar thread of plot-line as Lords — a transferred corporal replaces a teacher; mountains and mines; a town inhabited by interesting if shady characters; drunken evenings; black magic and severed heads. To be sure, Death in the Andes is covered in the mist of mystery and has certain political overtones, at least in the first half where the terror of the Shining Path Maoist guerrillas is constantly felt by the protagonist, Corporal Lituma, and his comrade Carreo. Lords is political too, but its politics is the politics of displacement, the corruption of the mining industry and the nexus that governs it. Inevitably, this politics ends up affecting the tribal, whose illiteracy is glaring and is the reason why Master Sahib has ended up in Bhaunrapaat in the first place. The Naxalite, as against Vargas Llosa’s Maoist, is a fading presence, but he too works as an element of fear, although that element is used to administer justice – a justice, one might say, that is long in coming; a justice still anticipated after layers of injustice have been laden upon the tribal for decades together. 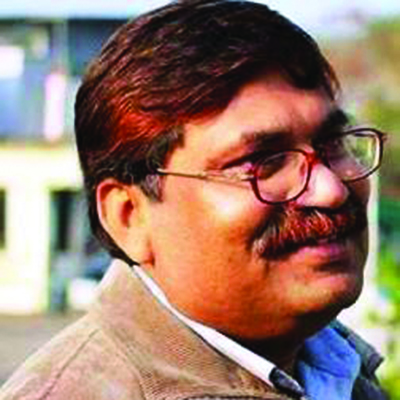 While the similarities between Native American and Indian tribal history are interesting, and worth a study, the constant insertion of factual information can irritate on a purely narrative basis, because it becomes tedious and sometimes even misplaced. Sudden thickening of plot demands tighter hold over the narrative for then the writer injects that poison of expectation within the reader. At this point, it does not suit the pace of the plot for Master Sahib to digress into the American administration’s inhumane displacement of the Cherokee tribe, however passionate his concern. That is because the fascinating history nullifies the equally fascinating plot, and the repetitiveness eventually makes the reader lose interest in following the fate of the characters – characters already teeming and subject to confusion. It becomes difficult to interest oneself in a story that hardly moves forward, and entangles itself in a balancing act even when it finally does.

The bountifulness of characters makes it hard for us to empathise with any one of them fully, though Ranendra manages to extract and stir some emotion within the reader as he leads her towards a chilling conclusion. But that is too little, too late. It is evident that Ranendra is masterful in his knowledge of the Asur community, but his mastery at attempting to position his knowledge with his plot is less so.

Ranendra’s attempts at drawing parallels between the Native Americans and the tribal communities all over India is commendable, and it lays bare the apathy shown towards the tribal community the world over and throughout global history by increasing emphasis on industrialisation and urbanisation for the benefit of handful. He has given us a vital text in recognising how imperialism of a different sort still exists in the distant forests of India, and how the urban population – comfortable in their knowledge of “development” and “economic progress” with long, glowing reports of international agencies to back those claims – how this population goes about without even a trace of idea about the blatant injustice being delved out in their name. That he manages to convey this within little over 150 pages is by the virtue of his undeniable talent, but, oh, this novel had the potential of achieving so much more.

Atharva Pandit is a student, currently pursuing his Bachelor of Arts degree in Politics at Ramnarain Ruia College, Mumbai.