Parsing the Math in D.D. Kosambi the Polymath

The criticism Kosambi faced over his papers on the Riemann hypothesis could have coloured his view of science's practice and his impression of how much class politics might have been to blame. 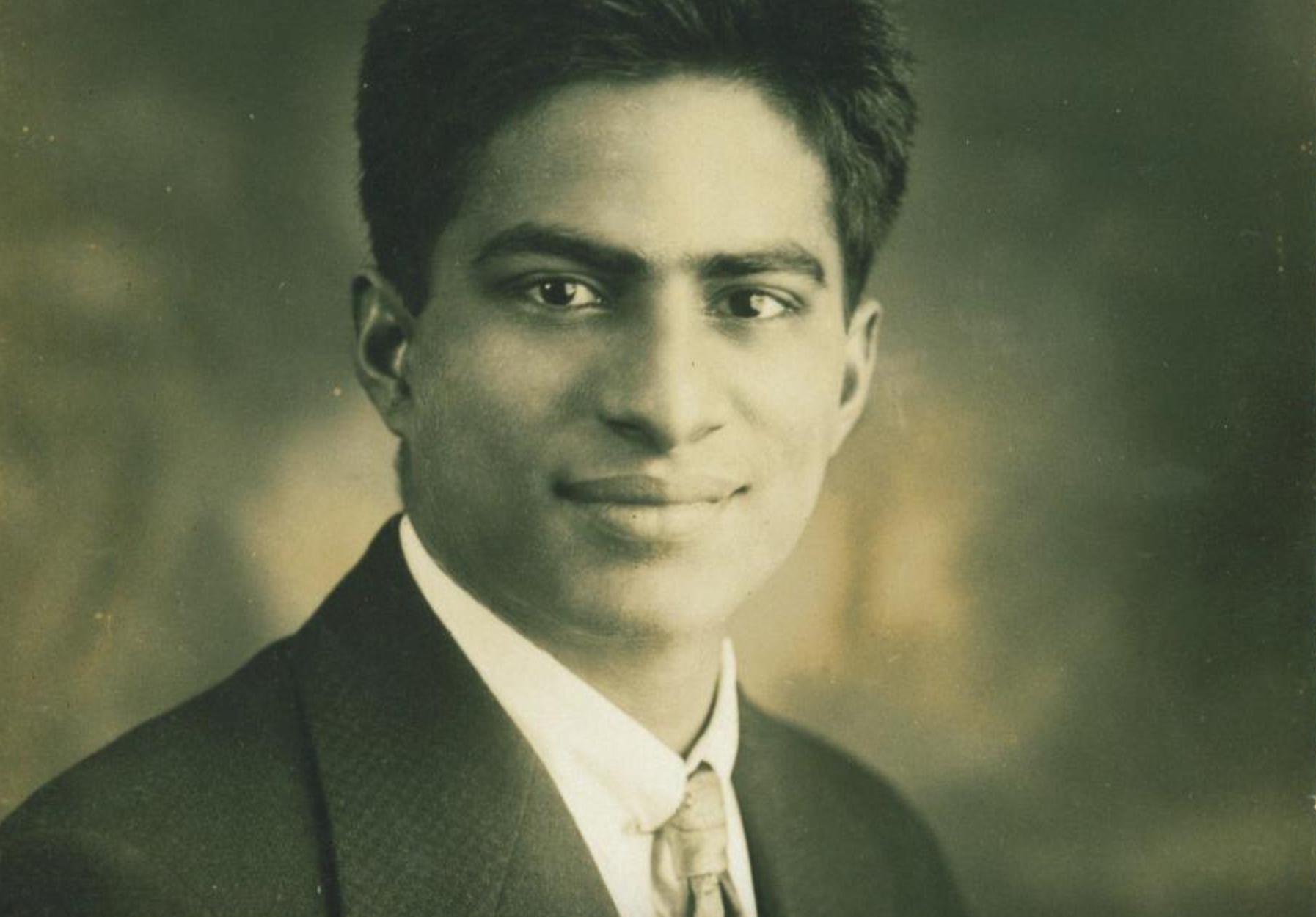 It surely speaks poorly of anyone to have been more familiar with D.D. Kosambi the numismatist, historian and Indologist than D.D. Kosambi the mathematician. A book edited by Ram Ramaswamy, D.D. Kosambi: Selected Works in Mathematics and Statistics (Springer 2017), promises to patch this blindspot, but not before Ramaswamy tries to excoriate your ignorance in the preface:

It can be argued that his major contributions in other areas were moulded by his knowledge and style of mathematics—whether the creation of numismatics as a form of historiography through the extensive statistical analysis of large hoards of coins or his deduction of the probable location of the Karasambhale caves. through a combination of estimation and logic. … Kosambi’s intellectual legacy needs to be considered in its totality; the mathematics is integral to his thinking and analysis and cannot be seen as separate from the work in numismatics or, for that matter, history.

From 1930 to 1958 or so, DDK enjoyed the respect and admiration of a large professional circle. … his contributions in areas such as ancient Indian history, Sanskrit epigraphy, Indology, as well as his writings of a political and pacific nature grew both in volume and in substance in the 1940’s and 1950’s, overshadowing his mathematics, although the constancy of his work in the area remained. … His [mathematical] papers appeared in leading journals of the world, and were communicated by or reviewed by some of the leading mathematicians of the time. And that this happened while his reputation in a diametrically different field was also burgeoning can only be seen as evidence of a complex but nevertheless Promethean intellect.

The book has three sections. The first section provides a helpful recap of Kosambi’s professional career through four articles: one, an essay by Ramaswamy, and three by Kosambi himself, in the form of an essay, a lecture and a report. The second section collects just under 70 of Kosambi’s most notable papers on number theory, statistics and geometry (of which about 25 are reprinted). The third lists some of his papers published in other languages.

Ramaswamy’s essay in the first section is of particular interest because it contains many curious tidbits providing important insights into Kosambi’s thinking. The ones that most caught my eye were about his papers on the Riemann hypothesis, which is concerned with the distribution of prime numbers. In 1859, the German mathematician Bernhard Riemann had conjectured that all the solutions to an equation he had perfected would be expressible in a common way. Therefore, ‘solving’ the Riemann hypothesis means proving conclusively that Riemann was either right or wrong. And depending on which outcome triumphed, mathematicians would derive crucial insights into where prime numbers could be found on the number line.

Ramaswamy recalls how Kosambi’s stature as a respectable mathematician was ruined from 1959, when he started work on a particularly controversial type of solution for the Riemann hypothesis, using probability. Unfortunately, this decline also coincided with Kosambi becoming insecure of his leadership position at the Tata Institute of Fundamental Research (TIFR), Mumbai. And together, they contributed to his fall from Homi Bhabha’s favour and eventually his ouster from the Department of Atomic Energy (DAE). 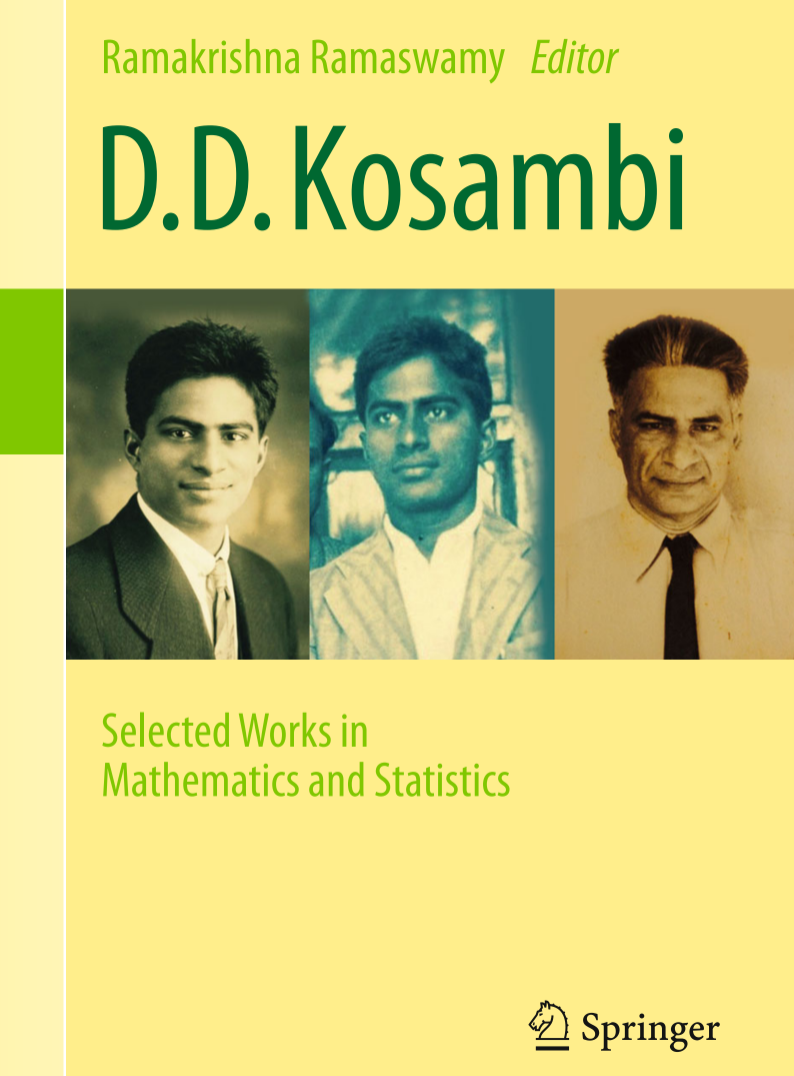 While the specifics are discussed briefly (p. 25; the papers are included in the second section, nos. 60, 61, 64, 65), Ramaswamy quotes extensively from reviews of Kosambi’s papers on the topic. One, by W.J. LeVeque, provides a peek into what Kosambi was trying unsuccessfully to do: “Of the two proofs given for the crucial Lemma 1.2, the reviewer does not understand the first, which seems to involve more ‘hand-waving’ than is customarily accepted even in proofs of theorems less significant than the present one. The second proof appears to be erroneous. … The reviewer is unable either to accept this proof or to refute it conclusively. The author must replace verbal descriptions, qualitative comparisons and intuition by precise definitions, equations and inequalities, and rigorous reasoning, if he is to claim to have proved a theorem of the magnitude of the Riemann hypothesis.”

The paper analysed by LeVeque for the journal Mathematical Reviews refers to one of two published in 1959. Both appeared in the Journal of the Indian Society for Agricultural Statistics (JISAS). According to Ramaswamy, choosing to publish in JISAS was not out of the ordinary because the journal regularly carried works on statistics. However, he also draws attention to the fact that JISAS was not peer-reviewed, and could not have spotted the “major” errors in Kosambi’s papers on the Riemann hypothesis before publication. This could have influenced Kosambi’s decision to publish in this journal over any other.

But much before this, in the first half of the 1950s, his relationship with Homi Bhabha, the father of India’s nuclear programme and the founding director of TIFR, had started to deteriorate. The two had shared a friendly relationship – seeming the stronger for it in spite of their political differences – until the late-1940s. They often worked closely together and harboured a deep respect for each other’s scientific work. A common ambition of theirs had been to set up a “School of Mathematics in India”. However, two younger scientists that Kosambi helped TIFR recruit, K. Chandrasekharan and K.G. Ramanathan, seemed to supersede his efforts in setting up the school. Ramaswamy writes: “Cracks began to surface in the relationship between Bhabha and DDK in the next few years, first in regard to students and then gradually with regard to details such as his attendance in office and other aspects of his working.”

The nail in the coffin for Kosambi’s standing came when some mathematicians signed a letter claiming that his proposed solutions to the Riemann hypothesis, “being broadcast internationally”, were embarrassing the vaunted institute. It was sent to Bhabha. These events also generally coincided with Kosambi’s advocacy of solar power over nuclear power, placing him in conflict with the views of his formidable employer, the DAE.

Yet despite all this, Kosambi continues to be an inspiration to this day. As Ramaswamy remarked, he had indeed enjoyed a successful career as a historian and mathematician for three decades. It is not easy to be taken seriously in both the humanities and the sciences at once, considering each has only become more specialised by the day and their communities, more closely knit. Kosambi himself recognised this.

In a July 2008 essay written for the Economic and Political Weekly, Irfan Habib attested to Kosambi’s confidence in his methods of historical analysis by discussing ideas in the latter’s book, An Introduction to the Study of Indian History (1956):

Before Kosambi, little work had been done on the history of technology in India; … the evidence available had not yet been assembled and critically analysed. Kosambi underlined the importance of this aspect of history by his numerous references to tools and products, such as the late use of the shaft-hole axe or the arrival of the coconut no earlier than the first century AD. On the other side of the spectrum was religion: … Religion was … the means by which exploited classes could be kept reconciled to their position, believing it to be divinely ordained, and, by such consent, reducing the amount of violence (with the expenses involved) which would be otherwise needed to keep them under control. To Kosambi, this role of religion provides the key to a proper understanding of the rise of the caste system.

Evidently, the book broke new and important ground. V.V. Gokhale, a friend of Kosambi’s, a frequent collaborator and a Buddhist scholar, wrote in 1967, “[Kosambi] believed in the Marxist method of interpreting and changing the human society, but did not hesitate to revise the data of Marx himself in the light of modern research.” Yet Kosambi writes in his essay ‘Adventure into the Unknown’, published after his death in 1966 (and reproduced in Ramaswamy’s book’s second chapter),

The conclusions published … had a mixed reception because of the reference to Marx, which automatically classifies them as dangerous political agitation in the eyes of many, while official Marxists look with suspicion upon the work of an outsider. 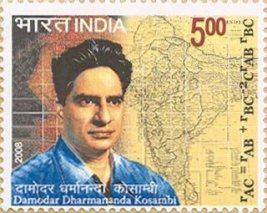 A commemorative stamp of D.D. Kosambi issued by the Indian government in 2008. Source: GoI

At this juncture, it is hard not to draw parallels between this attitude – of staking out against established perspectives in the study of Indian history – and the one that kept him loyal to his solution of the Riemann hypothesis. Both pursuits required single-minded focus, a commitment to unearthing new areas of study and knowledge, and resilience in the face of a “lack of assistance and steady disparagement” (p.25). To wit, Gokhale continues to write in the same article, “As an independent thinker with a passionate devotion to scientific research, [Kosambi] seemed to be almost exclusively preoccupied with his own intellectual pursuits. As such, he was sometimes accused of brusqueness and intolerance…”

These characteristics are on display as, in ‘Adventure into the Unknown’, Kosambi rips into his detractors with sardonic self-deprecation.

Every competent judge who saw only [my] radically new basic result intuitively felt that it was correct as well as of fundamental importance. Unfortunately, the Riemann hypothesis followed as a simple consequence. Could a problem over which the world’s greatest mathematicians had come to grief for over a century be thus casually solved in the jungles of India? … It was much more difficult to discover good mathematicians who were able to see the main point of the proof than it had been to make the original mathematical discovery. How much of this is due to my own disagreeable personality and what part to the spirit of a tight medieval guild that rules mathematical circles in certain countries with an ‘affluent society’ need not be considered here. There is surely a great deal to be said for the notion that the success of science is fundamentally related to the particular form of society.

As this excerpt’s last two lines suggest, the criticism he faced could also have coloured his view of the practice of science as well as his impression of how much class politics might have been responsible for his ideas on the Riemann hypothesis having been rejected. While Ramaswamy has been judicious enough to collate both positive and negative reviews of Kosambi’s papers, the fact remains that the hypothesis remains unsolved and that Kosambi’s approach doesn’t at all feature among those vying to solve it. This forces us to agree with Ramaswamy’s evaluation that those who did not criticise Kosambi’s ideas had to have been charitable to – and not honestly supportive of – it for various reasons. This also, in turn, forces us to consider whether Kosambi may have felt he was entitled to the legitimacy of his methods irrespective of the criticism they were facing.

Ultimately, it was unfortunate that being “independent” and “passionate” in one pursuit led to a celebrated success while being so in the other tarnished Kosambi’s academic credentials in the last years of his life. (This asymmetry may even make it harder to fault him.) Moreover, he deserves much credit for what he had already accomplished as a statistician, number theorist and numismatist, and as a historian, hermeneutist, Indologist and political scientist, by 1959. In the fourth chapter of Ramaswamy’s book, a self-evaluation submitted by Kosambi to the J.R.D. Tata Trust in 1945, the latter writes of how he was able to work on computing machines, Sanskrit studies (including a translation of Bhartrihari), health statistics, path geometry and ancient Indian coinage – all in six months and the last two at no additional cost.

So taken all together, Kosambi emerges as a unique role model because his mathematical fluency was superimposed on his historical awareness and unwavering political attitude – an almost utopian union of sensibilities. Ramaswamy’s book promises just such a view, which is doubly significant for our time when scientists don’t want to partake in politics and society at large prefers to be blind towards scientific ideas.