'I Don't Have a Mother-In-Law, I'm Grateful!': Reading Kishwar Naheed on Her 80th Birthday

'Horoscope,' by one of Pakistan’s greatest poets, comes alive in translation.

June 17, 2020, Lahore. A teenaged maid is tortured over a petty matter by her employers in a posh area of the city. Her name is Kishwar.

June 18, 1873. The United States of America vs. Susan B. Anthony, Northern District Court of New York.

District Attorney Richard Crowley: ‘On the 5th of November, 1872, Miss Susan B. Anthony voted for a representative in the Congress of the United States. At that time she was a woman. I suppose there will be no question about that. She did not have a right to vote. She is guilty of violating a law.’

Judge Ward Hunt: ‘The prisoner has been tried according to the established forms of law.’

Susan B. Anthony: ‘Yes, your honour, but by forms of law all made by men, interpreted by men, administered by men, in favour of men, and against women.’

Judge Hunt: ‘The prisoner will stand up. The sentence of the court is that you pay a fine of one hundred dollars and the costs of the prosecution.’

Miss Anthony: ‘I shall never pay a dollar.’

June 18, 1940, India. One of Pakistan’s leading feminists is born in the city of Bulandshahr in north India. Her name is Kishwar Naheed.

June 18, 2020, Islamabad. Today marks the 80th birthday of arguably Pakistan’s greatest poet alive, Kishwar Naheed, who has done for Urdu poetry what had been done earlier in Urdu prose by Ismat Chughtai. To many, she is no less than the Simone de Beauvoir of South Asia. She is the living face of Pakistani feminism, having seen off resistance from mullahs, clerics and dictators in the 20th century to her detractors in the Aurat March very recently in our own time.

Her untiring pen continues to speak for everybody who is oppressed, especially women, whether it is her fellow comrades in struggle or heroines from Islamic history. Which is why her own birthday fittingly coincides with a landmark moment in the history of the women’s suffrage movement in the United States – the trial of Susan B. Anthony in 1873.

Which is why too that she continues to agonise, organise and write about the plight of ill-treated workers like her unfortunate namesake Kishwar mentioned at the very beginning of this piece.

To mark the occasion of Kishwar Naheed’s 80th birthday today, I am offering my original translation of her poem Zaicha (‘Horoscope’), part of her latest collection of poetry Shirin Sukhani se Paray (‘Away from Sweet Talk’, Sang-e-Meel Publications, Lahore, 2018). 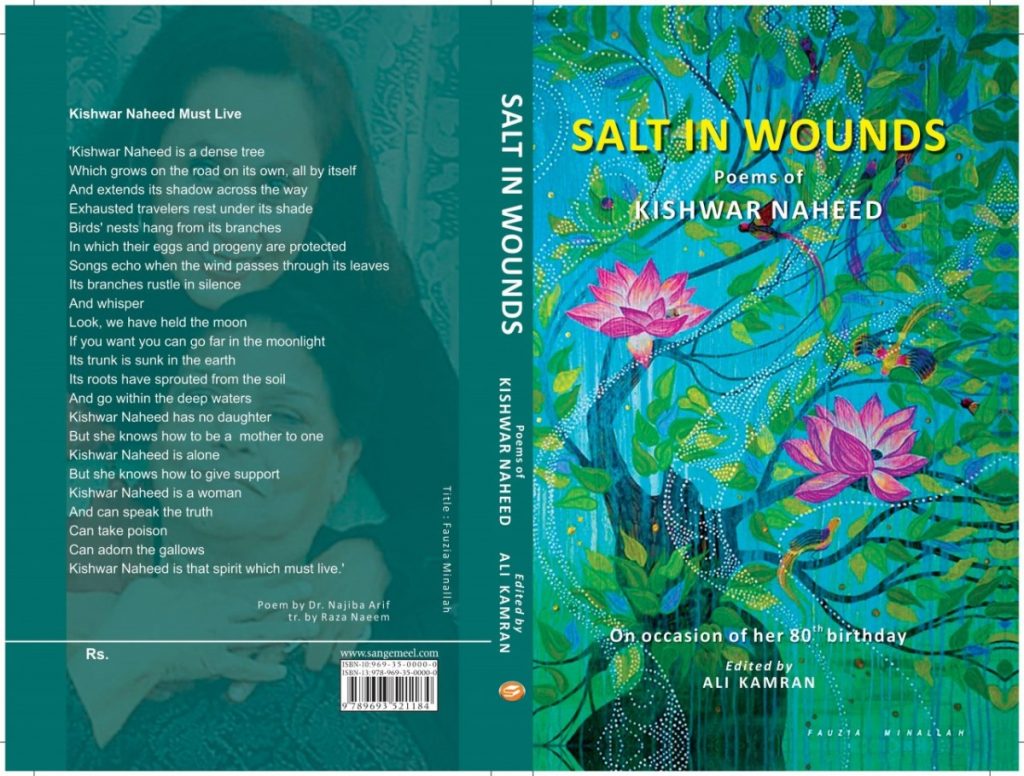 The poem beautifully evokes the challenges which Kishwar Naheed has encountered – and come to terms with – on a daily basis over her long life: from the ubiquitous presence of death to the mysterious eternity of the sea.

It is, by extension, also the daily horoscope of a typical South Asian woman, whether she is a relatively privileged lawyer like the late Asma Jahangir or a helpless domestic worker like the teenaged Kishwar.

With this translation, it is hoped that the life and legacy of the foremost Urdu feminist poet of her generation will be a subject of renewed interest and attention among the younger generations in South Asia, in a way which perhaps a non-existent Google Doodle would not have been able to capture.

At the time of writing, Kishwar Naheed was regrettably diagnosed positive with the coronavirus and is now in quarantine. May she recover quickly, live long and keep writing.

‘You are afraid to die

Indeed death never tells when it will be nigh

It is sunlight you dread

What kind of dread!

You are afraid of the dark

Shooting arrows in the air

Is not my manner!

You are afraid of writers who are contemporary

Bravo, different in front, and at the back, quite contrary!

You are afraid of writers whom old age has swallowed

And their hugs which are hollowed

You laugh when they are out of breath, seemingly bellowed

You are afraid of politicians

All talk, no actions!

Journalists too are a fearsome handful

I don’t have a mother-in-law, I am grateful!

You are afraid of the sellers of judicial judgements

I am not afraid of the grave’s torments!

You are afraid of your progeny

They don’t read my books avidly!

The mirror makes you afraid

From all my wrinkles is my identity made

You are afraid of the rain

In my eyes it remains

Thought does cause fear

But that is my alter ego, it’s everywhere!

Truth does cause intimidation

You are afraid of a canard

It has spread to every yard!

You are afraid of the sea

I wish to drown certainly!’

Raza Naeem is a Pakistani social scientist, book critic and award-winning translator and dramatic reader currently based in Lahore, where he is also the president of the Progressive Writers Association. He has previously written on, and translated the selected work of Kishwar Naheed. His most recent work is a contribution to the edited volume ‘Salt in Wounds: Poems of Kishwar Naheed’ (Sang-e-Meel Publications, Lahore, 2020). He can be reached at razanaeem@hotmail.com.