Kerala Gets Its Own Perumal Murugan, Thanks (Again) to the Sangh Parivar

"I am too weak to fight against the people who rule the country. I have decided to withdraw my novel because of the threats and attacks against me and my family,” said Malayalam author S. Hareesh. 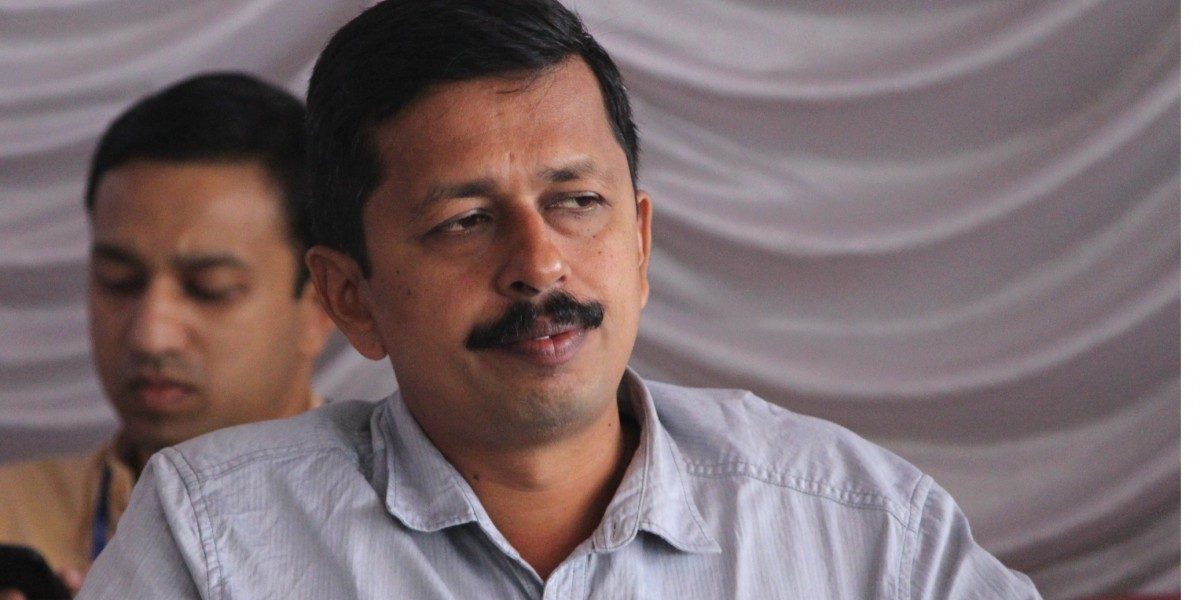 S. Hareesh has been active in the Malayalam literary scene for more than a decade with a string of short stories. His collection of short stories had won him the Kerala Sahitya Akademi award last year. Meesha (Moustache), his first novel, has been serialised in the Mathrubhumi weekly. Three installments of the novel have been published and he has announced his decision against publishing it further owing to threats of violence against him and his family from people associated with the BJP-RSS parivar organisations.

Set in the village folklore of Neendoor-Kaippuzha area of Kottayam district of Kerala, the first installment of Meesha subtly deals with the issue of caste laced with local history. In the controversial second chapter of the novel, which was narrated in the first person, unlike the opening episode, there is a reference of young women who visit temples. A dialogue – which could obviously be considered as a passing comment at this point in the novel – between the narrator and his friend who has already died has this controversial element in it:

“Do you know why these young women go to the temples wearing make-up and pretty clothing?” a friend who had been with me till six months ago, asked during our walk. “To pray,” I replied.

“No, you look closely, why would they wear the most beautiful attire, and make up to pray? They are subconsciously stating their willingness to have sex.” I smiled. “Or else why would they abstain for four or five days a month? It is nothing but informing their non-availability…”

This did not go well with the Hindutva brigade, which unleashed a vitriolic attack on the writer, first on social media, and then on the streets. Hareesh was forced to deactivate his Facebook account and lodge a complaint at the local police station. Those who called the novel an insult to their religion did not even spare Hareesh’s family. His wife and mother were slut-shamed and threatened with rape.

“I am too weak to fight against the people who rule the country. I have decided to withdraw my novel because of the threats and attacks against me and my family,” Hareesh told News television, run by the Matrubhumi group.

“What would an ordinary man do when these religious thugs threaten him of hurting his children?” asked a friend of Hareesh.

But the Matrubhumi management doesn’t seem to be on the same page as the editor. The group’s managing editor P.V. Chandran told The Wire that that he felt that some novels were offensive to a section of the society.

“I personally feel that the writing is certainly an insult to the devotees, especially the womenfolk. My wife and daughters are templegoers. It was nothing but an insult to them too,” said Chandran. “There were widespread protests against us, which I think has substance too. I was of the opinion that the writer should edit the stuff and he owes an apology to a section of the society.”

Sources inside the media group confirm that the management had asked for an apology from the novelist to be published, which he was not willing to. “The weekly had to stop press and pull out the pages when Hareesh communicated that he was not continuing the novel,” said an editorial staff of Matrubhumi. With the management and the editorial team not being on the same page, there was not much of an option left before the novelist but to withdraw his work, said a friend of Hareesh.

A group of BJP-Hindu Aikya Vedi activists had vandalised a book exhibition on spirituality organised by Mathrubhumi Books at Thrippunithura in Kochi, protesting against the novel.

“The circumstances that forced S. Hareesh to withdraw his novel from Mathrubhumi are absolutely shameful. This should never have happened in Kerala, a state that boasts of a progressive culture. Our writers have boldly challenged established norms and beliefs all through history. All writers, artists and everyone who believes in democracy and constitutional freedoms should meet this challenge and stand together for Hareesh and the freedom to write and to publish,” said poet and editor K. Satchidanandan.

Congress leader and MP Shashi Tharoor tweeted that his reference of Hindu Taliban stands vindicated. “Those who do not believe my warnings about the emergence of a Hindutva Taliban might learn from what has just happened to Malayalam writer Hareesh (and even more chilling, the threat to chop off his hands, Taliban-style),” said his tweet.

“I don’t think this is anything connected to the simplified notion of freedom of expression. This has a larger context that is political. The agenda of suppressing liberal, dissenting voices has been carefully orchestrated and disseminated into the public psyche by RSS-BJP parivar. Public discourse itself is re-oriented to keep the religious outfits undermining any progressive, secular content within it. This is a clear demarcation from the socio-political atmosphere in the country before 2014. Hindutva gains acceptance by pampering the religious sentiments of a section of the society,” said Pramod Raman, writer and television journalist.

This is not the first time the Hindutva forces have flexed their muscles against writers and intellectuals in Kerala. A huge controversy erupted when BJP state secretary A.N. Radhakrishnan took on Jnanpith winner M.T. Vasudevan Nair after he criticised the demonetisation move in 2016.

Kerala Chalachitra Academy chairman Kamal was also a target of the BJP-RSS as the leaders of the party asked him to ‘pack his bags to Pakistan’ during the controversy on the issue of whether the national anthem should be played in cinema halls. Poet Kureepuzha Sreekumar was attacked in Kollam by RSS activists last February for his alleged comments against the Sangh Parivar and other Hindutva forces mentioning the protest by the Dalit organisations against a ‘caste wall’ of Vadayampadi. Novelist Paul Zacharia was threatened of dire consequences by another BJP leader B. Gopalakrishnan ‘for painting Prime Minister Narendra Modi in bad light’ for the Gujarat riots.

The Kerala society by and large has rallied behind writers and film makers when they have been attacked by right wing forces, but those close to Hareesh feel that the case is a little different here. “Hareesh has not got the kind of support that was expected, maybe because he is not that active in party politics or any other trade union activities,” said a friend who did not want to be named.

After the issue gained steam, Minister for PWD, G. Sudhakaran, who occasionally publishes his musings as poetry, has come up in support of Hareesh. Opposition leader Ramesh Chennithala has also extended his support to the writer.

With Hareesh forced to withdraw his novel, Kerala has found its own Perumal Murugan, who did the same with his novel, One part Woman, in 2015. “If you do not like a book, throw it away. There is no compulsion to read a book. Literary tastes may vary – what is right and acceptable to one may not be so to others. Yet, the right to write is unhindered,” Madras high court had said, dismissing the case against Perumal Murugan.