Why We Remember (and Forget) the Rebel Poet Kazi Nazrul Islam 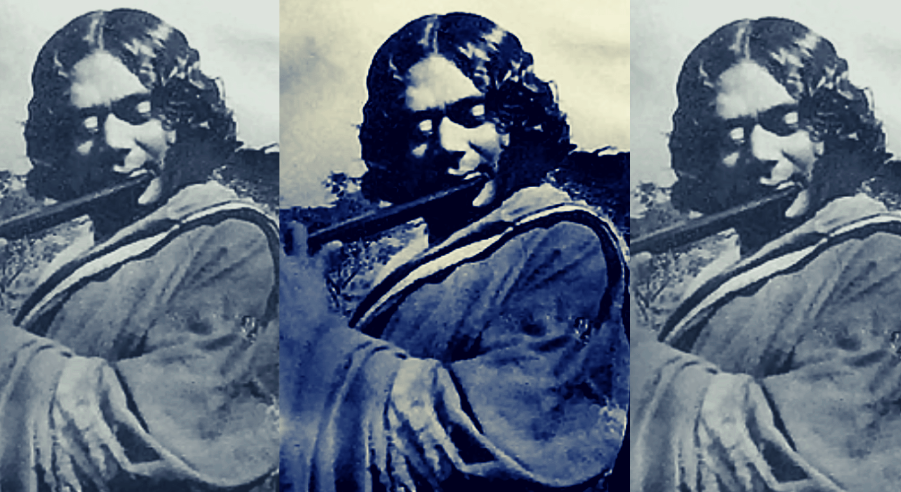 On May 25, we ought to have celebrated the 121st birth anniversary of a great poet and a revolutionary thinker but in West Bengal, where he was born, a natural calamity and a virus put an end to that.

However, it is also true that Kazi Nazrul Islam, who is revered in Bangladesh as her national poet, is much less admired than Rabindranath in popular imagination.

Is there a reason why we fail to remember his name when we discuss poetry that had shaped Bengali imagination?

In the public sphere, why has Nazrul remained a slightly indistinct figure if we compare him to other stalwarts of Bangla poetry?

The answer to that may lie not just in Nazrul’s life but in his radical poetics as well.

Nazrul began writing as a young boy and was deeply attracted to the traditions of bardic and folk poetry of rural Bengal, especially around his village Churulia near present day Asansol. He began composing songs for leto singing groups from his early teens when he was exposed to Hindu myths and Puranic stories. The outbreak of World War I made him enlist in the British Army where he worked as a quartermaster and studied classical Persian poets like Hafiz and Rumi.

It was in Karachi where he was posted that he came under the influence of the Bolshevik Revolution. And he began to unravel and understand his own role in the imperial army and to the ways in which a writer was shaped by his times.

Within a few years, the Non-Cooperation movement launched by Gandhi would influence him deeply and awaken in him an awareness of the plight of millions of Indians whose poverty and misery would become an important part of his artistic consciousness and poetic oeuvre. The poems of Agnibina from this period are full of his newly awakened political consciousness. Similarly, the Khilafat Agitation made him realize the necessity and imperatives of a Hindu-Muslim brotherhood that would rise against the British.

In 1922, he began to edit a weekly, Dhumketu (The Meteor) where he stated: ‘Dhumketu is not a journal devoted to communalism….Its primary motive is to remove the obstacles or misunderstandings that are strewn in the path of Hindu-Muslim unity.’ This investment in secular principles would remain a deeply significant strand in Nazrul’s writings and it was this, along with his commitments to Socialist ideas, that would bring him at loggerheads with his contemporaries, especially the writers of Shonibarer Chithi, a monthly literary magazine founded in 1929 and a fierce opponent to the radical politics of a younger group of writers who contributed to Kallol, a progressive literary journal.

The quarrel that broke out between these two groups of writers was to a large extent symptomatic of the division within the microcosm of Bengali intelligentsia. The radical Kallol writers were influenced by Marxist ideas and railed against the literary hegemony of Tagore. Their poetry focused attention on the downtrodden masses suffering under British colonial rule and against the increasing communal polarisation in Bengal’s politics and culture. Nazrul was one of the prominent contributors to this journal along with poets Premendra Mitra and Buddhadev Bose.

Nazrul’s confrontation with the orthodoxies of both Hinduism and Islam was especially tested when he married Pramila Sengupta of Comilla for which he faced a certain amount of social hostility. He drew the ire of even members of the reformist Brahmo Samaj. After the collapse of the Khilafat movement, the animosity between the Hindus and Muslims reasserted itself with riots breaking out in many parts of undivided Bengal. Chittaranjan Das’s interventions however managed to douse the flames and the Hindu-Muslim Pact was signed in December 1923.

However with Das’s untimely death in 1925, the Pact collapsed and Nazrul, who was a great supporter of Das’s ideals, was horrified to see Calcutta engulfed in communal flames in April 1926. The poet’s response was his famous song ‘Kandari Hushiyar’ (Boatman Beware, composed in May 1926) that he sang at the Provincial Congress Conference at Krishnanagar the same month.

Within a span of a short time Nazrul would write two articles, Mandir O Masjid (The Temple and the Mosque, August 1926) and Hindu-Mushalman (September 1926) as well as a number of poems on the theme of unity between Hindus and Muslims.

“Nazrul had a much larger and deeper concern for the Hindu-Muslim conflict than mere political expediency of the day. He viewed the problem from a cultural point of view and in the social and historical contexts as well,” said a biographer of the poet, Priti Kumar Mitra (The Dissent of Nazrul Islam: Poetry and History, Delhi: Oxford University Press, 2007, p.197).

This idea of the secular, as not just a political tool but as a part of the domain of literature and literary language is one of Nazrul’s great contribution to the contemporary public sphere and to Bengal’s literary aesthetic. It is an expression of this idea that we see in his poetic oeuvre again and again: an intermingling of Hindu and Muslim images and words that make his poetry so rich and iconoclastic in its sheer vitality.

This creates a strand in Indian literature that is both unprecedented in vocabulary and far-reaching in the way it would shape future aesthetic traditions especially in the years leading to 1947 and after. The finer implications of this aesthetic will need a much larger exegesis than is possible here but it will suffice to quote a few lines from his remarkable poem Bidrohi (The Rebel, 1921) for us to see the fluidity and the ease with which he created a poetic idiom that was in many ways both radical as well as much ahead of his times:

‘I am the colossal roar of the trumpet of the angel Ishrafil
I am the drum and the trident of the pinak bearing Shiva,
I am the scepter of Dharmaraja, the god of Death.’ (Translation author’s)

Nazrul’s continuous and prolonged interventions against communal polarisations had greatly ruffled the feathers of Hindu and Islamic orthodox sects. Poet Sajanikanta Das took up the cudgels, both to attack Nazrul and through him, Chittaranjan Das’s Pact that appealed for communal unity.

Some lines from Sajanikanta’s parody of Nazrul’s famous poem ‘The Rebel’ is worth quoting to draw attention to the vituperative nature of these attacks:

I am a frog, a rebel frog
I break out in joy, in an amphibian dance,
I am a frog,
In two legged trance.

Das resented Nazrul’s use of a Persian Arabic vocabulary and this antipathy became even more pronounced when Tagore was drawn into the battle. Nazrul’s eclectic use of so-called ‘Islamic’ words and the opposition to them by some public intellectuals and writers thus underlined a sharp communal polarisation even in the realm of literary language and aesthetics.

In December 1927, while delivering a speech at Rabindra Parishad, Tagore attacked the new generations of poets for their use of words like ‘khun’ instead of the more Sanskritic ‘rakto.’ Nazrul in his famous poem ‘Kandari Hushiyar’ (1926) had used the word and although Tagore did not mention Nazrul by name it was clear whom he meant, given that Nazrul had sung his poem to Rabindranath who otherwise held a deep affection for the younger man.

The word ‘khun’ in Bangla meant murder but in its original Indo-Persian usage it meant blood (seen even in modern Hindi). Nazrul’s use of the term had been in the latter sense. When this speech was published in Banglar Katha, Nazrul saw this as part of the concerted attack on him started by Shonibarer Chithi.

His essay, ‘Baador Piriti Balir Bandh’ (Atmashakti, December, 1927) takes up the question of language in some detail. Nazrul stated in the essay that the reaction over his use of the word ‘khun’ was symptomatic of Hindu upper class cultural chauvinism that attacked Islamic elements in modern Indian literature and culture.

Nazrul expressed surprise at the narrow aesthetic vision of the Shonibarer Chithi group and mentioned that Tagore himself often used words drawn from Perso-Arabian vocabulary that had historically and culturally contributed to the growth of modern Bangla. This was a literary practice that Tagore shared with many other writers and this syncretic dimension of Bangla added to its richness.

This controversy came to an end with the intervention of Pramatha Chaudhuri who wrote a witty piece in Atmashakti in February, 1928 called ‘Bongo Sahitye Khuner Mamla’ (The Case of ‘Blood’ in Bengali Literature) and some time later, Chaudhuri personally brought Nazrul and Tagore face to face again.

The aesthetics of eclecticism that was at the heart of this debate hid an important aspect of Bangla anti-imperial literary culture: the fight against orthodoxy and communal sentiments. Nazrul had opposed the Shonibarer Chithi group because he felt they defended a distinctive Hindu upper class/caste aesthetic principal against a more cosmopolitan radical aesthetics that was influenced by European avantgarde modernism as well as by strands of other historical encounters the subcontinent had had over the ages.

To Nazrul and his fellow poets in the Kallol group, they were in the long run defending an idea of a syncretic Bangla aesthetics that was at once sympathetic to other literary influences, politically charged and deeply engaged with the idea of a secular polity.

This essay is based on the author’s article ‘A Tangled Process: A Debate about Politics and Literature in the writings of Kazi Nazrul Islam and his Contemporaries in the 1920s’ that was published in the Niaz Zaman-edited, Kazi Nazrul Islam: Poetry, Politics, Passion, Dhaka: Writer’s Ink, 2019.