From V.P. Singh to corporate donations to political parties, 'In Pursuit of Justice' is a deep dive into the world that a proud socialist called his own.

In the first week of September 2012, a public meeting was organised by the People’s Union for Civil Liberties (PUCL) and a few other organisations at Hindi Bhawan, New Delhi, to felicitate Allahabad based activist-journalist Seema Azad and activist Vishwavijay after their release from jail.

Justice Rajindar Sachar was one of the main speakers at the meeting as he had been very active in the campaign for the release of both activists.

I, as an active member of PUCL back then, was given the responsibility of conducting the meeting that day. While inviting Justice Sachar to grace the podium, I introduced him as the former Chief Justice of Delhi high court. Before addressing the public meeting, he said, “Yaar, ‘judge’ kah kar mat bulaya kar. Aajkal judges ka standards bahut gir gaya hai…ye kah diya kar ki purane socialist hain.”

‘Please don’t introduce me as a judge. Their standards have fallen quite low these days. You can say that I am a veteran socialist.’ 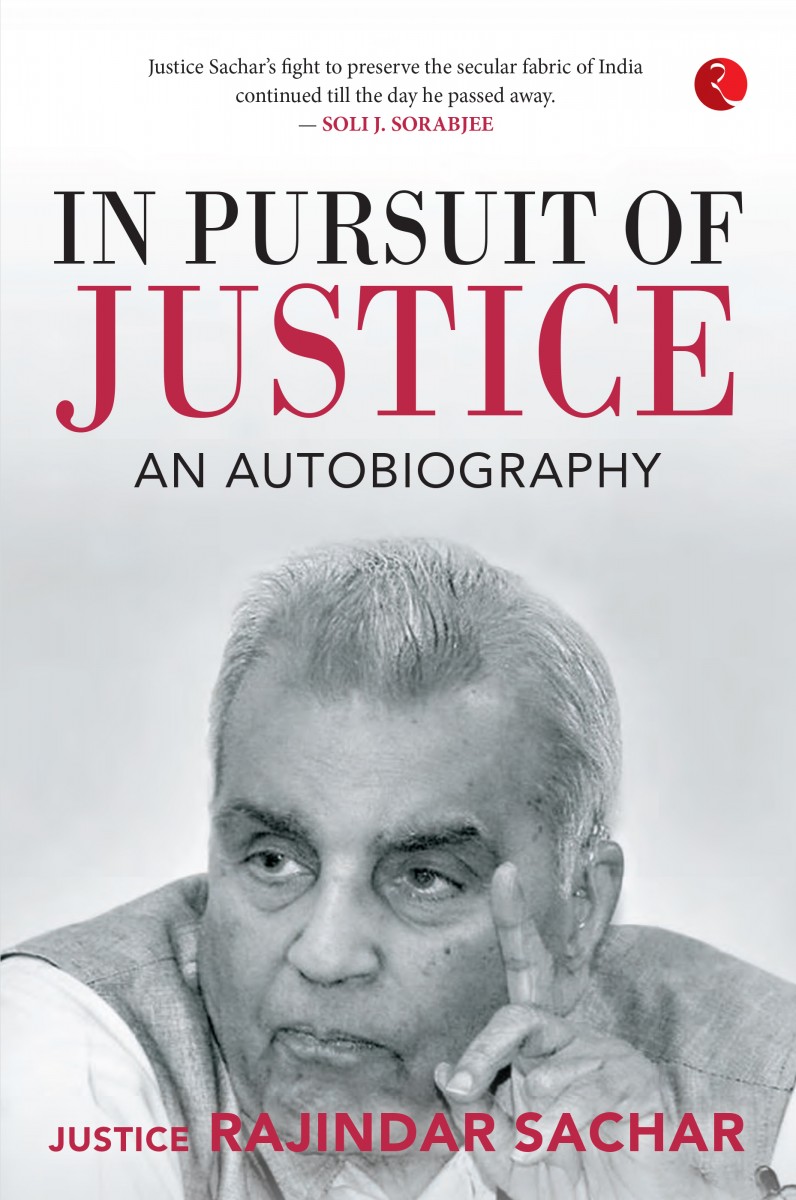 In Pursuit of Justice: An Autobiography, Publisher: Rupa Publications.

It is while reading his autobiography, In Pursuit of Justice, that I realise that his comment was less on the state of judges and more about his wish to be known and remembered as someone committed to the idea of socialism.

The book has been posthumously published and is to be launched today, December 22 — which happens to be his birthday, as well as the day of his retirement as chief justice of the Delhi high court.

Before becoming an additional judge of the Delhi high court, he was very active in politics. In fact, politics was his first preference, and only after realising that it was not possible for him to be a part of active politics and do public service did he agree to become a judge.

Justice Sachar was of the view that “in a democratic system, leadership coupled with a presence in the legislature is what gives real strength to political parties — they enjoy greater respect, and, I would say, are able to propagate their policies with greater impact”.

In his autobiography, he also notes, “I feel that many of our leading social activists, such as Aruna Roy, who exclude themselves from the electoral fray, do not realise that without a political set-up and without a political presence in the legislature, the impact they have on public opinion and public support is much less.”

Though he is widely acknowledged, and rightly so, for what is better known as the Sachar Committee Report (2006), he also led several other committees during his lifetime. One of his lesser-known (and acknowledged) works is as the chairman of the high-powered expert committee on Companies and the Monopolies and Restrictive Trade Practices Acts, which submitted its report in 1978.

Of the many matters the committee dealt with in the course of their review of the Companies Act, two are still very relevant and continue to be debated. One is the issue of workers’ inclusion in a company’s board of directors and the other, of corporate houses making political contributions.

With regard to workers’ inclusion in the board of directors, the committee made several favourable recommendations, taking a cue from the Directive Principles of State Policy in the constitution, and other important policy documents, such as the report of the Planning Commission, and in consultation with industry bodies and labour unions.

On the question of companies making political contributions, the committee recommended its prohibition. According to Justice Sachar, “This recommendation was unanimous and approved by industrialists, trade unions and representatives of political parties. There was an apprehension that ‘if corporate donations were permitted, the danger to democracy can be well visualised’.”

“It is unfortunate that the High Powered Committee’s recommendation of not allowing political donations was not included in the Companies Act or the current Companies Act of 2013. On the contrary, the law has been made easier,” notes Justice Sachar with much dismay.

In March last year, the election commission of India told the Supreme Court that the electoral bond project and removal of caps on the extent of corporate funding would have “serious repercussions/impact on the transparency aspect of political finance/funding of political parties”.

Another lesser-known fact about Justice Sachar is that had he (then retired) not intervened just in time, it would have been difficult for V.P. Singh to become the prime minister of India in 1989, despite the fact that during the campaign, he (Singh) was the face of the seven-party anti-Congress alliance, the National Front.

Justice Sachar quite vividly recalls in his autobiography how, after the elections that year, he had received a call from veteran journalist and his brother-in-law Kuldip Nayar asking him to join the latter at Haryana Bhavan without much delay.

“I went there and found Chaudhary Devi Lal, Kuldip and J.D. Sethi (he became a member of the Planning Commission in 1990) in a huddle. Devi Lal was saying that he was committed to supporting Chandra Shekhar’s name for prime ministership. Since Kuldip was aware that I had known Devi Lal from the time he was an MLA and had also represented him in the high court in a number of cases, including election petitions, he had called me to persuade Devi Lal to support Singh. I asked Devi Lal why he had decided to put forward Chandra Shekhar’s name as prime minister. He replied, “What can I do?” Chandra Shekhar says, “I am such a big leader and I cannot be under V.P. Singh. He is a newcomer compared to me.”

To this, Justice Sachar reasoned that Chandra Shekhar might be a bigger leader than Singh in that sense, but there was no doubt that the people had voted for Singh.

According to Justice Sachar, at that time, Devi Lal was being pressurised by his son, Om Prakash Chautala, to support Chandra Shekhar as he had been given to understand that he would be made the chief minister of Haryana.

Moreover, writes Justice Sachar, “There was the refrain that Chandra Shekhar had the support of many.” To which he said: “Forget it, I know the Janata (party) people. When Chandra Shekhar tells you they will all vote for him, that is not so. That part you can forget.” This made Devi Lal change his mind. 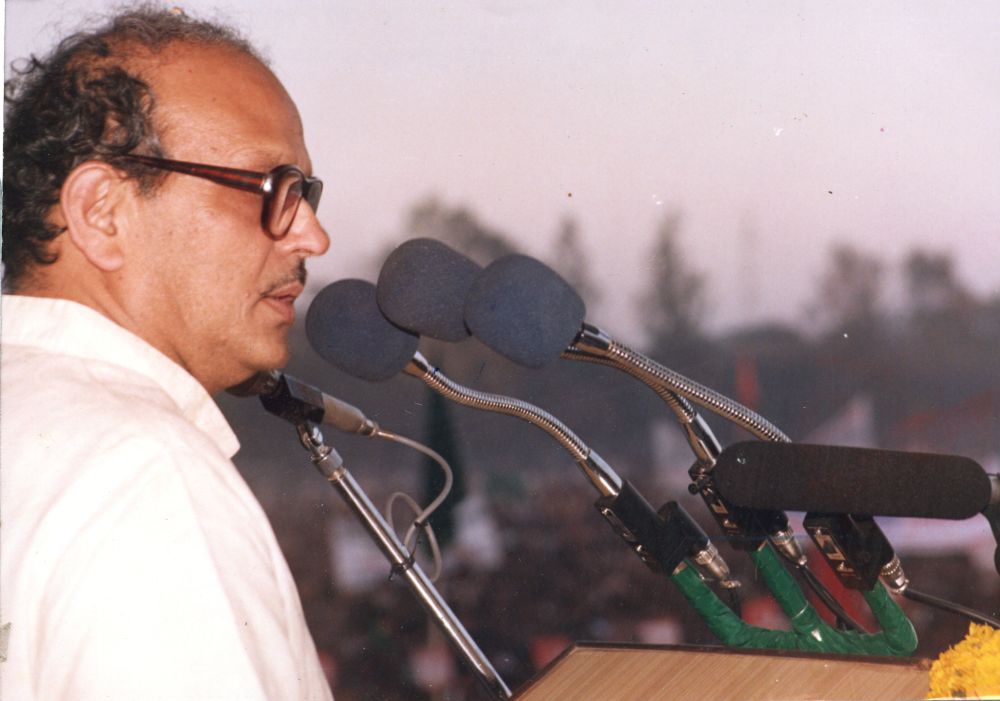 “Accordingly, a plan was put in place. On 1 December 1989, the Janata Dal parliamentary board met to elect its leader. (V.P.) Singh proposed the name of Devi Lal, and Chandra Shekhar seconded it. Then Devi Lal stood up and took the name not of Chandra Shekhar but of Singh, saying that he had been the face of the election campaign against the Rajiv Gandhi government. (Chandra) Shekhar probably never forgave us for that,” notes Justice Sachar.

On the frequently asked question of why judges take a different view of the same point, Justice Sachar remarks, “It’s a fallacy to think of judges as machines and expect them to deliver the same results in a particular situation.” According to him, “for every judge’s decision is influenced by the major inarticulate premise that plays a role in his or her thinking. A person’s philosophical thinking, which is developed even before he becomes a judge, has a great deal to do with how he arrives at his judgement.”

He further adds, “Though judges try to be impartial and objective, it would be misleading to think that their decisions are not influenced by their ideas on issues such as gender equality and labour relations, to name a few.”

In Pursuit of Justice is insightful on several counts, and if one were to name a few, it not only provides a ringside view of the Indian judiciary and the functioning of judges, it also helps one to understand the close relationship between law and politics, how to handle pressure while holding public office, why justice should be preferred over law.

The book has chapters on almost every important issue or event which has affected India in one way or the other over the last seven decades. Right from Partition to the Kashmir conundum to the emergency to the anti-Sikh violence to the Indian Muslims, it covers a wide range of issues that affected India, its polity and society.

Remarkably, while it is a no holds barred account of Sachar’s life, there is hardly anything in it which can be termed sensational. But that does not make it boring. It is one of the most engaging books that I have read in the recent past, and what keeps it captivating are the stories that fill its pages. And there are lots of them.

The book will interest anyone who is even slightly interested in understanding realpolitik, the importance of public service, and how one can, without compromising with her/his principles, make a lasting impact on public life.