Isaac Deutscher, the 'Non-Jewish Jew' and the Intellectual Tradition He Came From

Although he had renounced his Jewish faith early, Isaac Deutscher nevertheless tapped into the Jewish heretical tradition.

There are men in every generation who swim against the tide all their lives, and Isaac Deutscher was that kind of man. He was a Pole who made his formidable name writing in a language he taught himself when he was 33. He was a Jew brought up in the strict Hasidic tradition, but Zionism never appealed to him and the state of Israel struck him as an anachronism – and at any rate, he had ceased being a believer in his middle teens.

A Marxist revolutionary, he was a relentless critic of Stalinism ever since the early 1930s, when Stalin could count many admirers among Europe’s left-liberals; but he never made the ex-communist’s and the anti-communist’s cause his own when Stalin fell out of the West’s favour. His magisterial biography of Leon Trostsky did more than anything else written in any language anywhere to restore that great rebel to the pantheon of the October Revolution’s tallest leaders, but he dissociated himself from Trotsky and his Fourth International even as Stalin’s acolytes continued to picture him as a crypto-Trotskyist.

He was thus a heretic many times over, and the faithful of every denomination and every description treated him with the misgiving and mistrust that the pious reserve for the renegade.

Deutscher himself always drew a line between heresy and apostasy, however. He believed that while the renegade was worthy only of contempt, the heretic demanded a more nuanced appraisal.  Even as he recants, the heretic seeks to hold true to his moral compass, his value system, so that he continues to engage with the same basic issues that he had been grappling with till now, though the terms of his engagement may have now changed. For the renegade, on the other hand, the world has been turned upside down, so that things which, till the other day, exercised his intellect and his imagination powerfully, have now lost much or all of their meaning.

In his 1950 essay ‘The Ex-Communist’s Conscience’ – his review of The God that Failed – Deutscher  makes this point brilliantly. In reviewing the ‘irrational emotionalism’ that dominated the evolution of many ex-Communists, Deutscher quotes Ignazio Silone, himself one of the contributors to The God…, and goes on to indict the intellectual renegades who, repulsed by Stalinism’s ugliness, often went way beyond their starting-points, even  embracing Fascism in some cases: 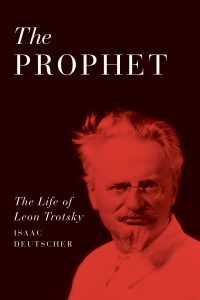 The Prophet: The Life of Leon Trotsky
Isaac Deutscher

Deutscher grew up in Chrzanow, a little town in southern Poland half-way between Cracow and Auschwitz on a tip of land wedged between the frontiers of three empires – the Russian, the Austro-Hungarian and the Prussian. His most formative years were thus spent at the intersection of several national cultures – Polish, Ukrainian, Hungarian, Slovak and German. Besides, his own Jewish origin, the fact that as a child, he was steeped in the Jewish faith and Jewish mores, added its own unique dimension to his multicultural identity.

But the fact that he was a Jew also meant that he was some kind of an outsider to all the diverse cultures he was exposed to and imbibed (for a Jew in Poland, where terrifying pogroms took place often enough in his childhood, this sense of being an outsider must have been quite inescapable.)

Then, as a young adult, Deutscher abandoned his religious faith and veered towards Marxism, joining the outlawed Polish Communist Party at age twenty. Just five years later, the party threw him out because of his opposition to the Stalinist position of equating European social democracy with Nazism.

From 1939 and until his death in 1967, he was obliged to live in Britain, in self-exile, with the Second World War –and, after the war, Poland’s status as a Soviet satellite – having made his homeland out of bounds for him. He was widely respected as a columnist, commentator, historian and expert of Soviet affairs, contributing regularly to some of the most well-known British, Continental and American newspapers, magazines and journals.

His biographies of Stalin and Trotsky are considered among the best political biographies written in any language. And yet, he was barred from joining British academia, primarily because he was a confirmed Marxist. (He had sought an academic position so that, no longer required to earn a living by writing newspaper columns, he could focus his energies on more substantive work.)

It is a fair guess, therefore, that the sense of standing somewhat outside of every society and every culture stayed with him till the very end.

Also read: The Outcast as Witness: Victor Serge and the Russian Revolution

Even in the context of the tempestuous 20th century, the trajectory of Deutscher’s life had few parallels. And yet we can perhaps trace his intellectual and moral ancestry to an extant European tradition. Indeed, I will argue that Deutscher himself drew our attention to this tradition, even though in an altogether very different context. In a speech he gave to the World Jewish Congress during the Jewish Book Week in February 1958 (later included in his posthumously-published book The Non-Jewish Jew).

He began his speech with a story from the Midrash (the Jewish exegetical bible text) about a great Jewish heretic of ancient times who, though he disregarded Jewish ritual boundaries and taboos, was yet revered by devout Jews for the brilliance of his mind and his sagacity.

“The Jewish heretic who transcends Jewry’’, Deutscher concludes, “belongs to a Jewish tradition”. And he sees this great Jewish heretic as a prototype of some great revolutionaries of modern thought: Spinoza, Heine, Marx, Rosa Luxemburg, Trotsky and Freud, all of whom were Jewish by birth, but all of whom transcended Jewry.

They all went beyond the boundaries of Jewry. They all found Jewry too narrow, too archaic, and too constricting. They all looked for ideals and fulfilment beyond it, and they represent the sum and substance of much that is greatest in modern thought, the sum and substance of the most profound upheavals that have taken place in philosophy, sociology, economics and politics in the last three centuries.

Deutscher believes that in some ways, all these six revolutionaries were very Jewish, even though they had either given up their Jewish faith or were atheists altogether. All of them were heretics, because each had eschewed given wisdom and sought out a path for himself or herself to self-actualisation.

They had in themselves something of the quintessence of Jewish life and the Jewish intellect. They were a priori exceptional in that as Jews they dwelt on the borderlines of various civilizations, religions and national cultures. They were born and brought up on the borderlines of various epochs. Their mind matured where the most diverse cultural influences crossed and fertilized one another. ….Each of them was in society and yet not in it, of it and yet not of it. It was this that enabled them to rise in thought above their societies, above their nations, above their times and generations, and to strike out mentally into wide new horizons and far into the future.

Deutscher shows how these exceptionally gifted individuals, though they lived lives very different from one another’s, shared broadly in some  common philosophical and epistemological principles: that reality is not a jumble of accidents but is shaped by a larger pattern; that human society is continually in a state of flux, is dynamic, and not frozen in time or place; that moral standards are relative and evolving, and not unvarying or cast in stone; that knowledge, to be real, must be linked to action, to praxis; that humankind is bound together in ties of solidarity and the common good. These ‘non-Jewish Jews’, he goes on to say,

were essentially optimists; and their optimism reached heights which it is not easy to ascend in our times. They did not imagine that it would be possible for ‘civilised’ Europe in the twentieth century to sink to a depth of barbarity at which the mere words ‘solidarity of man’ would sound as a perverse mockery to Jewish ears.

Unlike the great ‘non-Jewish Jews’  he talks about, Deutscher was witness to ‘civilised’ man’s unspeakable barbarity in the 20th century. Nearly ninety  percent of all Polish Jews, both Deutscher’s parents among them, were liquidated in the Holocaust. He looked on as the post-war world divided itself into two armed-to-their-teeth, hostile camps which often seemed intent on mutual annihilation. He also lived long enough to see a murderous American assault on puny Vietnam unfold with diabolical precision. A lesser man would have succumbed to apathy, or despair, or rank cynicism.

But Deutscher’s response to the heaving chaos of the post-war world was to stay true to his calling as a clear-eyed, non-dogmatic Marxist intellectual – writing, commentating, lecturing at anti-Vietnam War teach-ins and calling out Cold War lies. And to keep his faith with humanity’s power to eventually emancipate itself from all manner of injustice and indignity – even if its recent report-card suggested that such faith could well be a chimera.

Deutscher would perhaps hate to be told this, but he himself stood in a direct line of descent from those great Jewish heretics whose intellectual odyssey he documents with such sensitivity.

Anjan Basu freelances as literary critic, commentator and translator. He can be reached at basuanjan52@gmail.com