Interview: 'We Have Shifted From an Era of Invisibility of Women to Hypervisibility in Media'

Refashioning India: Gender, Media and a Transformed Public Discourse explains how the Indian media has transformed public discourse around the economy, feminism and politics between 1990-2017. 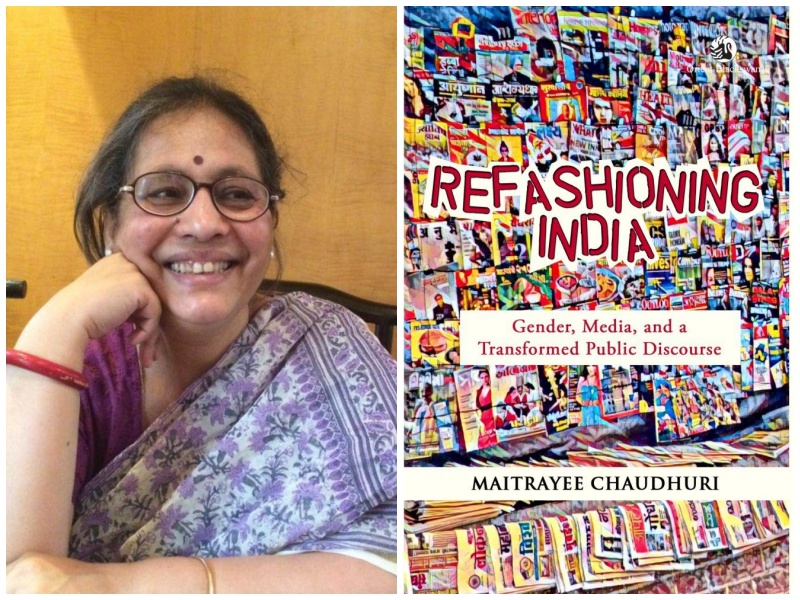 Maitrayee Chaudhuri, professor of sociology at Jawaharlal Nehru University’s Centre for the Study of Social Systems, in an interview with The Wire talks about her latest book Refashioning India: Gender, Media and a Transformed Public Discourse, in which she links together politics, economics, the expansion of the media, the hyper visibility of women and a certain institutionalisation of feminism.

To begin with, during this period (1990-2017) India went through massive structural changes in the economy by embracing globalisation and free trade. The media, too, witnessed dramatic changes with the arrival of new media, proliferation of TV networks, rapid growth in newspapers. Could you please elaborate…

You are absolutely right. My effort in this book is to link the politics, economics, the expansion of the media and what I describe as the hypervisibility of women and a certain institutionalisation of feminism together. I have argued that gender is a pervasive presence in contemporary Indian media and popular culture. And there are three grounds on which this visibility rests: one, India’s economic policy; two, the Indian women’s movement; and three the prominence and reach of media and communication.

What made you write this book and how did you reach this argument?

There are two stories here. One, that relates to my early work on the emergence of the women’s question in colonial India. This historical backdrop is reflected in both the treatment of nationalism and of gender. In fact, the first essay flags off the tensions in the nationalist vision.

Many of the conflicts we witness today date back to that essay. The contestations between community and women’s rights emerged in that period and we saw its full play in the 1980s – in the Shah Bano and Sati cases. And yes, more recently in the Padmavati case. We can see that contestation even in the absurd and brutal fall-out of the love jihad case, or for that matter the triple talaq case. The most recent incident that comes to mind is of a chief minister rueing that women have started drinking beer. Recall in this context the Prime Minister’s spontaneous acerbic and deeply misogynist comment on the laughter of a woman MP.

In the old days we had no media. But now it is omnipresent. So we witnessed the visual of the sheer heartfelt delight in the ruling party (Bharatiya Janata Party) members who guffawed like they would in their private spaces right in our homes and in our phones.

The other part of the story is linked to what you asked me before about the economics, culture, politics and media working in tandem in this new context. I began to be interested  in media representation of women in the early 1990s. Everything appeared to change with glossier newspapers, a flood of flashy magazines, abundance of exciting  news about celebrities, Page 3 write-ups. Initially, I concentrated on studying images of women and increasingly also of men. We saw male models, advertisements for male beauty products, men in more caring roles, as in the Raymond adverts. We also saw women portrayed in highly successful roles – as CEOs, entrepreneurs, bankers.

This got me thinking. And revisiting the earlier idea of commodification and objectification of women (the old feminist critique). And here the advertising world told us …they were harbingers of change and gender equality. Men now used Fair and Handsome (a fairness cream). This prompted me to see this barrage of new images, write-ups as a concerted ideological effort to create a new worldview, marking a shift in public discourse.

Does that mean advertisements or the new focus on successful women have brought gender equality and are the new champions of feminism?

Gender is probably the social resource used most by advertisers. Even in the recent Jaipur Lit Fest, the person from the advertising world spoke of how the pressure cooker advertisements have shifted from a time where the husband was asked to gift his wife one if he loved her, we now have a celebrity couple Aishwarya Rai and Abhishek Bachchan in an advertisement where Abhishek cooks! Gender, I argue, is something that strikes as the most basic characteristic of the individual and can be conveyed fleetingly in any social situation.

This is the tricky question and this is what the book seeks to engage with. My argument is that we seem to have shifted from an era of invisibility of women (issue that feminists raised in the late 1970s) to hypervisibility as we witness in contemporary mediatised word. Feminism is big as they say. After (Harvey) Weinstein (American film producer against whom there were numerous sexual harassment allegations) and the #MeToo campaign, the point I make about hypervisibility would be obvious. This is very different from the 1970s protests that media does not report on women’s issues!

Does this mean that both media and the women’s question has changed for the better?

Media itself has changed. Indeed this is the story of this book. And women have changed. Anywhere one travels in India, women are outspoken, driven and raring to go. But I have a caveat here. In my book I have dealt extensively with the rise of individuated selves, the backlash to organised women’s movement and the sense that one has arrived on one’s own abilities. There is no sense of a history or past struggles here. The individual is the maker and shaker.

And the tricky thing is that women’s issues in a certain way “sell”. Is that a bad thing? No. But if the issue is sensationalised, it is bad. And here the logic of the new media takes over. Flashy! Instant! Smart! Grab the headlines! Disappear.

And here I link it with the broader neo-liberal focus on the agential entrepreneurial women… Whether it concerns the poor woman who takes a loan from the bank or the model who showcases a certain kind of beauty. It is all about choice and freedom.

The language of choice and freedom has changed. The first time I saw a TV programme showcasing the tricolours for Independence Day with lollipops in tricolour and barfis ….I was taken aback. Since then I am constantly taken aback.

You argue that the “….new ethos of commerce makes its presence felt in media”, blurring the lines between news and advertorials and lifestyle stories. Tell us about you research in this area and some of the main findings.

You will recall how when the new adverts were changing, the media too was changing. I would constantly find researched pieces on renovating kitchens or  crockery – about empowering women, educating children. There were interviews with power couples, how Bollywood actors spent their holidays, conversations with designers. I remember a full debate on a beauty parade, mom-daughter relationship….camaraderies.

You have written about how media have straddled the contradictions between advocating capitalism, globalisation, consumption and also representing strong nationalist, even hyper-nationalist sentiments.

Yes. This book is also centrally about how capitalism changed and nationalism did too. Nationalism too has been reduced to buzzwords. In the first decades after the 1990s I have argued that we had a new projection of ‘feel good nationalism’ that feted our achievements: in our IT sectors; our IIT graduates at the helm of global corporates; where the front page of newspapers carried news of campus recruitment and the unbelievable offers; where Miss Indias, Miss Worlds were received by the President of the country.

The NRIs loved this. The increasing role of the diaspora in public discourse is another spin-off in the book. The narrative has continued in the media. Consider, for instance, the coverage of India at the Davos summit. Sitting at home, we consume these images and vicariously enjoy the sense of power and nationalism.

After 2014 under the new hegemony of the ruling BJP, we now have ‘hate filled nationalism’.  Love of the nation has to be advertised and publicised. And those whom one sees as enemies of the nation should be humiliated and shown their place. And the horror of this – as we have – was recently conveyed to us in a widely circulated video showing a man being killed. A vendor sells #MeToo badges at a protest march for survivors of sexual assault and their supporters in Hollywood, Los Angeles, California US November 12, 2017. Credit: Reuters/Lucy Nicholson/File Photo

You appear to have some problems with the idea that greater communication leads to greater freedom?

I do. I use the term overcommunicative abundance in the current context.

Social media, it is argued, makes it possible for anyone anywhere to raise her  ‘voice’ and it then becomes global news. But I have a small problem here… While the internet is global, its use is not. This is confined to groups, the new communities. WhatsApp groups are the best example of this culture.

My question is – what has become of the idea of a larger public to which we all belong as citizens?

There are many kinds of public. They are like target groups of advertising firms….high-end market, low end – the model that has been appropriated by the ruling dispensation. Aspirational… struggling.. are today’s buzzwords.  The book deals with this culture in some detail.

What is the structure of the book? And why this centrality of gender in it when the book is also about many other things?

In fact, my first chapter hinges on the First Plan Document of Women published in 1947. The document was called “Role of Women in a Planned Economy”. It is an amazingly rich, complex and radical document that critiques the ‘idea of the sanctity of marriage’; the harm that ‘doctrinal religion’ can do to an individual; of  right to equal opportunities for every man and woman. The language I use here is weighty, informed,  grave and passionate.

The other book end is the 12th chapter on the 2014 Elections and what has happened to India since then.  Gender, I argue here, remains central. Take a quick look at the 2014 general election campaign. Every political party had women’s issues in their manifesto. You will recall that the brutal rape and death of Nirbhaya happened in 2012. We had a Womanifesto 2014, setting out “positions on female economic empowerment, female access to education, sexual violence, policing etc..” The language here is smart. Acronyms become the flavour of the day. The point being made is not that this visibility is unimportant. But yes, it is problematic and we need to examine the strange conjoining between visibility and invisibility.

Between the weighty Plan document on women initiated in 1938 (Chapter 2)and the 2014 Elections and after, (Chapter 12) we try to capture the details of advertisements, advertorials, features, media discourse, political debates, women’s movements that slowly and steadily move to our present times of WhatsApp messages and hate-filled trolls on social media.

But my key contention is that the hypervisibility of gender does not necessarily add up to a greater gender-just society. The point I am making is that over the last two decades we have seen a hollowing out of ideological commitments. Buzzwords have taken over and as we know buzzwords and snappy one-liners that emerge from advertising professionals and marketing agencies do not rest on any foundational commitment or understanding of either gender justice or democracy. We have seen and heard the slogan of Beti Bachao Beti Padhao. We have also seen the deeply misogynist attitude evident in not so stray comments of leading members of the ruling dispensation.