Immanuel Wallerstein: Radical, Scholar and Prophet of Our Capitalist Times

Wallerstein, the founder of a school of thought called world-systems analysis that became influential in the social sciences, passed away on August 31.

Any intellectually audacious venture like Wallerstein’s was bound to be controversial. And indeed, the thinker's work met with great criticism. Photo: Wikimedia Commons

Immanuel Wallerstein, one of the great radical scholars of the second half of the twentieth century passed away on August 31, 2019. He was 88.

“This is the end; this is the beginning,” he wrote in his last blog commentary in July this year.

The ongoing structural crisis of global capitalism promised an unknowable future, he wrote, and there was but a 50/50 chance we would see a transformative future.

With his passing, Wallerstein has joined a whole generation of influential radical scholars who departed in the last decade.  Wallerstein was a liberal who became a radical scholar, a former soldier who joined anti-war movements, a scholar of Africa who moved to understand capitalism as a global system; a student of independence movements who became sceptical of state-centred political projects and nationalism.

Most importantly, Wallerstein was the founder of a school of thought called world-systems analysis that became influential in the social sciences.

Like many in his generation, Wallerstein was radicalised by the global revolts of 1968. 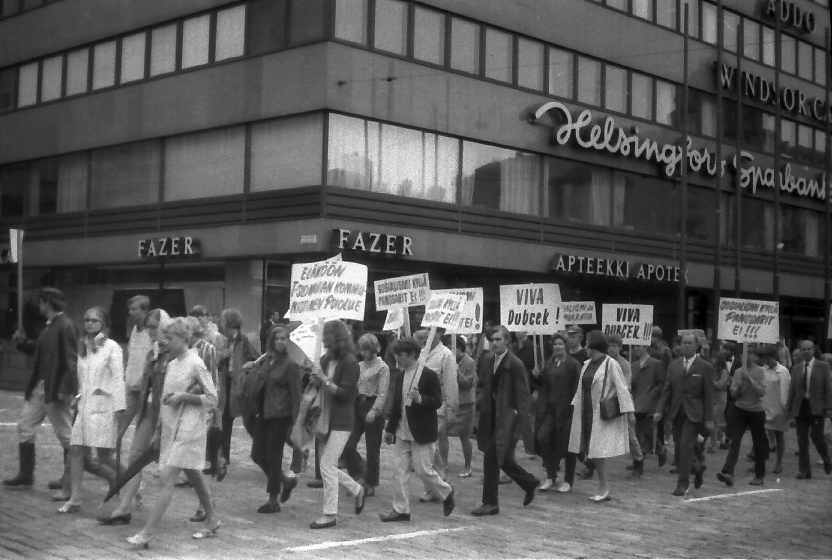 A demonstration in Helsinki against the Soviet-led invasion of Czechoslovakia in August 1968. Photo: Wikimedia Commons

Forced to leave Columbia University for sympathising with student protesters, Wallerstein met up with Giovanni Arrighi, Andre Gunder Frank and Samir Amin in Dar Es Salaam, Tanzania. At that time, the atmosphere in Dar Es Salaam was electric.

This was the time of southern African liberation movements, when the city also hosted activists of the US Black power movement, radical intellectuals from Europe and exiles from South Africa.  After their meeting, Wallerstein, Arrighi, Gunder Frank and Samir Amin began a productive intellectual collaboration that would stretch over decades.

Each of them became an individual scholar of repute with their unique critiques of global capitalism. And all of them shared an important link with Africa in their intellectual journey.

In 1974, Wallerstein published the landmark first volume of The Modern World-System: Capitalist Agriculture and the Origins of the European World-Economy in the Sixteenth Century.  A capitalist world economy had emerged in Europe from a “fortuitous simultaneity of events” and went on to establish a dominant position in the globe for the next few centuries, from “being a world to become the historical system of the world”.

A world-system was a spatio-temporal unit, based on a global division of labour; divided into zones of the core, periphery and semi-periphery. The core initially emerged in Western Europe and expanded to North America and Japan, the periphery included the colonised and underdeveloped parts of the world. Semi-peripheries acted as buffer zones between core and periphery. The zones of the core, semi-periphery and periphery were dynamic, their relationships shaped global power, exploitation and class relations. For Wallerstein, the capitalist world system worked through long-term cycles and secular trends. The system he espoused is defined by a global unit of analysis rather than individual nation states, which continued to play important roles as political units.

For Wallerstein, modern capitalism was a global right from the outset, from its emergence in the 16th century and through the cycles of slavery and colonialism, on to the 20th century crises. No protest was too small, no lecture too insignificant for Wallerstein to attend. Photo: Wikimedia Commons

Periodically, hegemonic actors would seek to dominate the world system, the Netherlands in the 17th century, the United Kingdom in the 19th century and the United States in the 20th century.

At the time of the publication of the first volume of the Modern World System, discussions on the history of capitalism were dominated by Marxists. What was remarkable about Wallerstein’s volume was that the argument came out from a larger body of social and historical sciences; the conceptual references included Fernand Braudel, Karl Polanyi, and of course, the work of Marx.

Wallerstein’s account of capitalism was non linear, it showed a system that was global and based on structural inequality. Crucially, this was a system that was unsustainable and fated to decline in the long term, a position Wallerstein held from 1974.  Given its cross disciplinary ambition, the Modern World System intervened and addressed many dominant traditions at that time. On the one hand, the book critiqued Cold War modernisation models of progress pushed by the US, and on the other it revived an older Marxist tradition of addressing capitalism as a world system rather than as a collection of national states with internal class relations.

Also read: How the Liberal Left Lost Its Way

Rather than associating capital with ‘free’ wage labour, Wallerstein’s work suggested that capitalism’s drive for ‘endless’ accumulation incorporated many forms of coercive labour, including slavery. In the coming years Wallerstein came out with more volumes of the Modern World System. These addressed crucial questions of the French Revolution, the emergence of the social sciences, and cycles of hegemonic power.

Any intellectually audacious venture like Wallerstein’s was bound to be controversial. From the sociological profession, Theda Skocpol mounted a Weberian critique suggesting that Wallerstein’s work ignored state structures and military power. From a conventional Marxist position, Robert Brenner argued that Wallertsein’s work prioritised circulation rather than class relations. 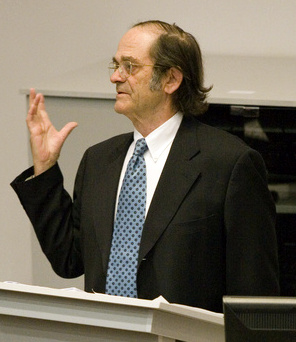 Even collaborators like Giovanni Arrighi, while acknowledging the significance of the project, pointed to certain contradictions and silences in Wallerstein’s argument. (Wallerstein replied to some of the critiques in his lucid essay-book Historical Capitalism).

Despite all the criticisms thrown at Wallerstein’s world system analysis, it marked a remarkable intervention in the social sciences. Many of the questions Wallerstein raised –  like the global nature of capitalism, structural inequalities and its endemic crisis have now been normalised in our public discourse after the 1990s. A vast body of global history and scholarship has emerged, engaging with and going beyond the challenges raised by the publication of the Modern World System. The ecological questions posed by the expansion of an expanding global system of extraction have emerged starkly in recent times.

Wallerstein was vastly prolific, with hundreds of peer reviewed articles, many standout books, and a regular stream of awards. He wrote on the crisis of the social sciences, problems of universalism and nationalism, the new social movements, and the continuing unsustainability of capitalism as a historical system. Uncertainty as a philosophical concept for the social sciences fascinated him, he was profoundly influenced by Order Out of Chaos by Ilya Prigogine and Isabelle Stengers.

I knew Wallerstein first as a student in the great Phd seminar he taught in the US, when he was professor of Sociology at Binghamton and director of the Fernand Braudel Centre. This seminar was an introduction to world systems analysis, and we were astounded that he did not include any of his own writings in the syllabus, preferring to provoke us intellectually about major questions. As students we had open dialogues and frank intellectual debates with teachers and Immanuel (as we called him) was no different.

However, I felt Imannuel’s work was indifferent to cultural questions. In contrast to his historical work, the analysis of contemporary movements tended to be excessively sociological – we had many debates in class and outside on this. After I returned to India I would meet Immanuel in conferences, workshops and political events. We had vastly different intellectual interests (I work on media and urban life) – despite this, I always learned more every time we met. He invited me to write a paper for an international academic group on inequality that he coordinated. The book that emerged, The World is Out of Joint, is a fitting description of our turbulent times.

Wallerstein was an intellectual of a unique generation: multilingual, with diverse interests, always curious. He followed events in India since the 1950s, and had many friends among scholars in the subcontinent. He was also a witness to the liberation movements in Africa, has written about conversations with Fanon, and quite movingly about the tragic death of Aquino de Bragança, a Goan revolutionary who participated in the anti-colonial movement in Mozambique. Wallerstein connected to every social movement in recent times – 1968 and the anti-apartheid movements, the anti-capitalist movements in Seattle, the Zapatistas, the World Social Forum, and the Occupy movement in recent years. He spoke at protests, strikes and demonstrations – never refusing requests from groups large and small.

“I had a gut feeling in the 1950s,” Wallerstein wrote just around the beginning of  2000, “that the most important thing happening in the 20th century was the struggle to overcome the control by the West of the rest of the world.”

Many of his original insights have shown their continuing relevance – the global nature of our crisis, the long term decline of Western power, and the  human and ecological inequalities of a model of accumulation that emerged hundreds of years ago in northern Europe. In the difficult decades that lie ahead of us, these ideas will echo for a long time to come.

Ravi Sundaram is professor at the Centre for the Study of Developing Societies, Delhi. He is co- founder of the Sarai programme and has edited four volumes of the Sarai Reader series. He also wrote Pirate Modernity: Media Urbanism in Delhi (2010) and edited No Limits: Media Studies from India (Delhi, 2015). His essays have been translated to multiple languages.