Scholar Richard H. Davis offers a fascinating insight into the way in which the American philosopher who inspired the likes of Gandhi and Martin Luther King Jr. comprehended and articulated the Hindu classical texts. 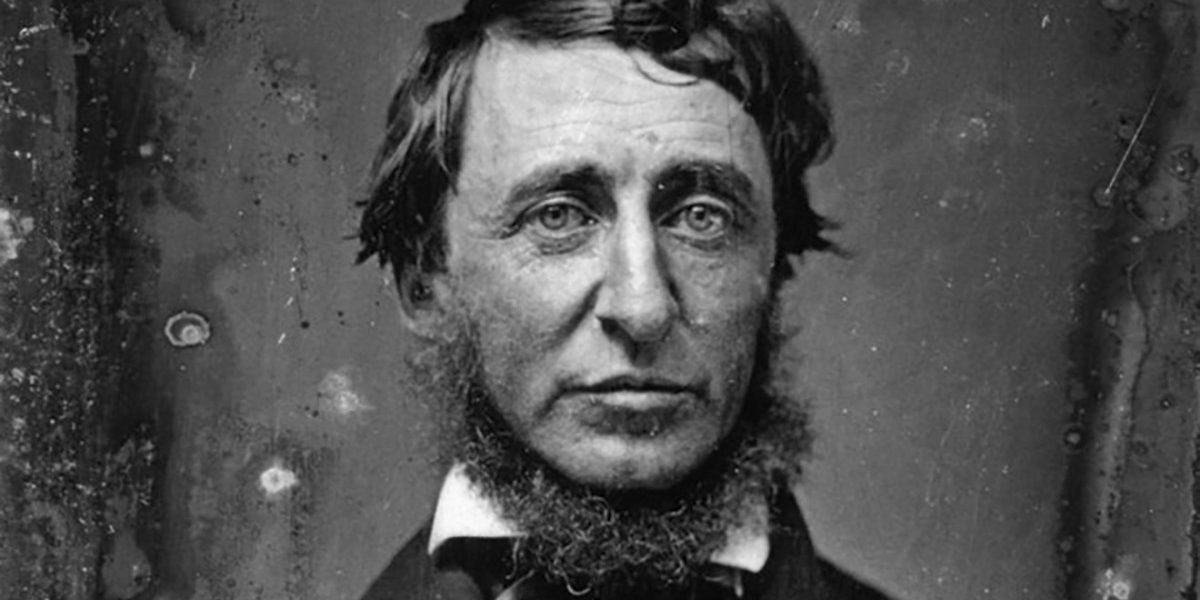 “There are nowadays professors of philosophy, but not philosophers…. To be a philosopher is not merely to have subtle thoughts, nor even to found a school, but so to love wisdom as to live according to its dictates, a life of simplicity, magnanimity, and trust. It is to solve some of the problems of life, not only theoretically, but practically.”

This quote from Henry David Thoreau’s (1817-62) well-known work, Walden; or, Life in the Woods (1854), encapsulates the insight he gained from reflecting on the works of “the ancient philosophers, Chinese, Hindoo, Persian and Greek” he read so avidly and empathetically at an impressionable age in the 1840s.

The quotation also underpins Richard H. Davis’s insightful approach to understanding Thoreau in his seminal essay, ‘Henry David Thoreau, Yogi’ published in Xenophilia: A Symposium on Xenophobia’s Contrary, Part 3 of the journal Common Knowledge (Vol 24, Issue 1, Duke University Press, 2018). One in a total of six issues, the exploration of the theme of xenophilia in them was “intended as a response to the great expansion of xenophobia all over the world these days”.

Davis’s exploration of ‘Thoreau the Yogi’ rests on what he sees as the most significant aspect underlying Thoreau’s vision – that of xenophilia, or ‘love or affection that embraces other races, cultures, and religions’. His understanding of Thoreau as a xenophile is helpful in understanding why he continues to resonate with thinkers, activists and lovers of literature to this day.

The life-encompassing vision that permeated Thoreau’s writings and actions as a philosopher, journalist, poet, naturalist and abolitionist, is well-known. Along with his mentor and friend Ralph Waldo Emerson, Margaret Fuller and Amos Bronson Alcott, he was an advocate of the postcolonial, literary, political and idealistic philosophical movement of transcendentalism that emerged in the eastern coast of the US, especially in New England, in the 1820-30s. Transcendentalism essentially was based on the idea of the innate goodness of human and nature, thus shifting the focus of philosophical engagement from society to the individual.

Equally, it is known that Emerson and Thoreau, as Klaus K. Klostermaier notes in his A Survey of Hinduism, were the first American philosophers who engaged with Vedanta. Thoreau’s work influenced the likes of Leo Tolstoy, Mahatma Gandhi, Dr. Martin Luther King Jr. and Martin Buber. His influential essay, ‘Resistance to Civil Government (Civil Disobedience)’, published in 1849, strongly argued against the Mexican-American War (1846-48) and slavery. While studying at Harvard College, as the university was known then, he read Emerson’s essay ‘Nature’ when it was published in 1834 and later lived with him serving as his editorial assistant in The Dial, a transcendentalist magazine published by Fuller and Emerson.

The purpose of Davis is to examine the manner in which Thoreau comprehended, assimilated and articulated the Hindu classical texts he read during a brief, creative period in his life when his back-to-nature philosophy led him to an over two-year long writing retreat (1845-47) in the woods on the banks of the Walden Pond, Concord, Massachusetts. The retreat resulted in the completion of Walden. His books and essays published in journals are replete with eloquent descriptions of the minutiae of nature he observed, which continue to inspire naturalists.

In his eloquent style Thoreau restated Emerson’s philosophical precept of “one mind” as an interpretative (hermeneutical) approach to scriptures in Walden:

“The oldest Egyptian or Hindoo philosopher raised a corner of the veil from the statue of divinity; and still the trembling robe remains raised, and I gaze upon as fresh a glory as he did, since it was I in him that was then so bold, and it was he in me that now reviews the vision. No dust has settled on that robe; no time has elapsed since that divinity was revealed.”

Davis terms this approach to reading ‘dialogic’ and observes that a dialogue between the modern reader and ancient philosopher is an unusually intimate encounter of the “I in him” and the “he in me”, and that both Emerson and Thoreau read works of Indian antiquity along with the usual Greek and Roman classics in this fashion when they published the ‘Ethnical Scriptures’ series in The Dial. The way Davis interprets it, Thoreau’s approach to reading was vastly different – both from the ‘historicising perspective’ of British Orientalists (while reading their translations), and from the ‘dichotomising judgments’ of the British Anglicists. 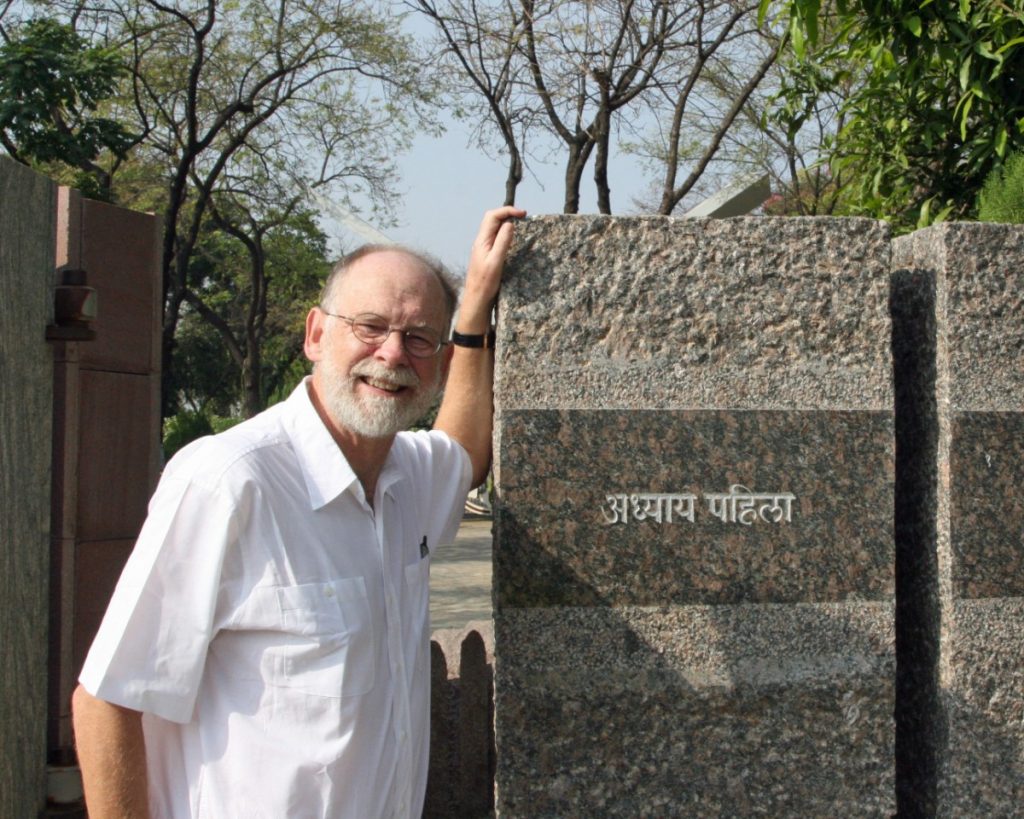 Among the notable translated texts that Thoreau read and quoted in his first book, A week on the Concord and Merrimack Rivers, and in his essays were William Jones’s Institutes of Hindu Law (the Manusmriti), besides the Hitopadesa, Sakuntala, Samkhyakarika, Vishnu Purana, and the Harivamsa (from a French translation). But, points out Davis, it was the Bhagavad Gita that became central to Thoreau’s dialogic manner of reading as he sat on the banks of the Walden Pond reading a borrowed copy of Charles Wilkin’s 1785 translation. Thoreau describes that on reading it he “felt the sacred Walden water is mingled with the sacred water of the Ganges”.

The brief account, and the purpose, of Wilkins’ first Gita translation – the first classical Sanskrit scripture that was translated into English – mentioned in Davis’s essay is elaborated in his book, The Bhagavad Gita – A Biography (Princeton University Press, 2014). This book echoes his decades-long teaching engagement with the Gita at the Bard College, Annandale-on-Hudson, New York.

Bereft of jargon but not falling short on academic rigour, the work is accessible to anyone interested in its history – from its origin in ancient India to its reception in Europe and America and the popularity it enjoys today as a ‘global’ scripture with translations in 75 languages worldwide.

Davis describes how Charles Wilkins and William Jones were assigned the task of translating the Bhagavad Gita and the Manusmriti respectively when they were employed by the East India Company in Calcutta. The work was commissioned by Warren Hastings after he became the governor general of Bengal, with the objective of governing the territories according to the laws of the land instead of British law. Davis reiterates that “Hastings’s proposal was the founding event of the Western discipline of Indology, for it led the British administrators of Bengal to the study of Sanskrit.”

Wilkins was the most adept in learning Sanskrit and he relocated to Banares to work with Sanskrit pundits. His eagerness was to earn him the sobriquet “Sanskrit-mad” from the Indologist Henry Thomas Colebrooke and his translation of the Bhagavad Gita in May 1785 was published as The Bhagavat-Geeta, or Dialogues of Kreeshna and Arjoon; in Eighteen Lectures, with Notes.

On the one hand, reading Davis’s essay on Thoreau in tandem with his book on the Gita enables an understanding of how the colonial enterprise of undertaking translation as a political act literally opened the floodgates following the reception it received in Europe and then in America. On the other hand, Thoreau’s ‘dialogic’ reading of the Wilkins translation, as described by Davis, gives insight into how he lived like a yogi. Davis highlights this fact right at the outset with a quote from Thoreau in a letter to his friend Harrison Blake in 1849, “Depend upon it that rude and careless as I am, I would practice the yoga faithfully. To some extent, and at rare intervals, even I am a yogin.”

The yoga described in the Gita, which Thoreau tried to follow, is not the Hathayoga practiced by millions today, but the self-transformative philosophical vision taught in it; and it is another dimension that Davis adds to his description of xenophilia with reference to Thoreau as a philosopher.

Emerson expressed his gratitude to Thoreau in his journal of 1845, “I owed – my friend and I owed – a magnificent day to the Bhagavat Geeta. It was the first of books; it was as if an empire spoke to me, nothing small or unworthy, but large, serene, consistent, the voice of an old intelligence which another age and climate had pondered and thus disposed of the same questions which exercise us.”

Barbara Stoler Miller in her translation of the Bhagavad Gita observes that “the ascetic, mystical love of nature that brought Thoreau to Walden Pond gave him access to the central teaching of the Gita.” Davis, however, observes that though Hindu religious leaders like Swami Sarveshananda in his article, ‘Thoreau: The First Sannyasin of America’ in Prabuddha Bharata, (1985), have regarded Thoreau as America’s ‘first sannyasin’, he still fell short of the exacting standard of dharma set forth by Manu.

Davis explains that Thoreau never set out to aspire to the standard described by Manu for sannyasins; he had never intended to abandon his livelihood. Dharma according to his pragmatic, American definition was “listening for that inner drum beat” and the new dharma he created for himself while living at Walden Pond during that defining two-year period of his rather short life “was that of a writer, a man of letters”. The experiment to live like a yogi translated effectively in the completion of his literary project!

Davis’s designation of Thoreau as the ‘occasional yogi’ to evaluate how he understood, assimilated and articulated the Hindu classical texts he read during a brief, creative period in his life accords with Thoreau’s definition of the philosopher and his preoccupations quoted at the outset and with the hermeneutic of the “one mind” approach to his reading of texts. As to whether he was a xenophile, Davis notes that “xenophilia is, among other things, a means of self-transformation”. The thinker tried to follow the self-transformative path of yoga, inspired by the teachings of the Gita he had studied during his Walden days, even though he did not pursue the life of a yogi till the end of his life. Yet, Thoreau continues to inspire because he strikes a chord with readers across generations as a philosopher who tried to live by his principles.