Ex-IPS officer Vibhuti Narain Rai recounts the massacre in his book Hashimpur 22 May, weaving a narrative with survivors' stories, court documents and his own memories. 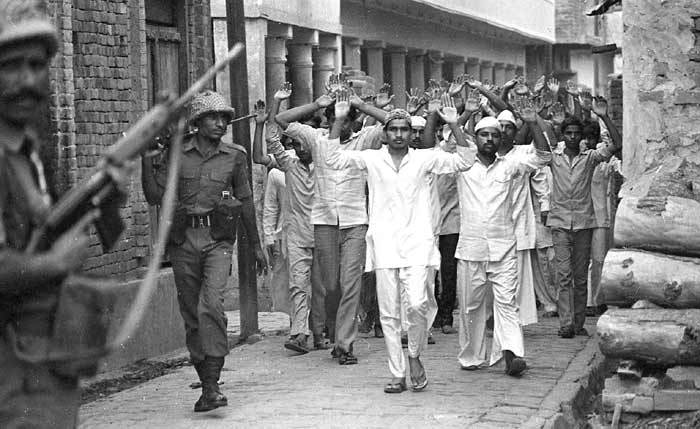 The army had an evident but ignored role in the Hashimpura massacre. Credit: Praveen Jain

On March 21, 2015, a sessions court in Delhi acquitted all the 16 accused in the Hashimpura massacre case citing lack of evidence. The Hashimpura massacre, arguably one of the most brutal cases of violence in independent India, took place on May 22, 1987. What makes this massacre different from other cases of violence is that it was perhaps the first case of custodial killing at such a large scale. Forty-two Muslim youth were killed in cold blood by the notorious Provincial Armed Constabulary (PAC), an armed force in UP.

While the verdict was saddening and yet another blow to our criminal justice system, it was hardly surprising or shocking. This was primarily because from the first day itself, the state and its apparatus left no stone unturned to save its officials. It went as far as to deny that such an incident had ever taken place, by destroying evidence, by calling witnesses and survivors liars and by not cooperating in the investigation and judicial process, which ultimately led to the case being dragged for nearly three decades and with virtually no result at the end of the trial. Hashimpura 22 May tries to answer in greater detail how the massacre took place, who all were involved in it, what it meant to the survivors in particular and about justice in general. Author Vibhuti Narain Rai is a former IPS officer of the UP cadre who had served for nearly four decades. He is also a known Hindi novelist and writer. Rai has been honoured with the President’s Police Medal for Distinguished Services and the Police Medal for Meritorious Services. He was also the vice chancellor of Mahatma Gandhi International Hindi University between 2008 and 2014. At the time of the massacre, Rai was the superintendent of police of Ghaziabad, a district close to where the incident occurred and he was the one to register the FIR in the case.

Originally in Hindi, the book is as much about the massacre as it is about a police officer who was both with the system as well as ‘against’ it. He was so disturbed with the killings and its aftermath that despite being a prolific writer, it took him years to finish the book. Written in the form a memoir, it reads like pages from the diary of a cop who is deeply disturbed not just by the massacre but also by how justice was denied to the survivors. He explains his frustration and helplessness rather dejectedly in the book.

“The monstrosity of the incident was so overwhelming that it laid a virtual siege on me and I was often scrounging for the right words. I was so depleted of the energy that it slowed me down like never before — at times I couldn’t even wrap up a small chapter in one sitting,” writes Rai adding that, “By the time I found the right words, the ghosts of the dead would overpower me.”

The book begins with a vivid description of what had happened that fateful night, of how he came to know about the massacre, of what he saw at the crime scene and later at the PAC camp and the reactions from the government, both central and state. Apart from the author’s firsthand account, there are a great deal of survivors’ stories, recounting their arrests and escape and the killings of many others.

Rai also tells us of how the victims of India’s biggest custodial killing in post-independent India were betrayed by almost all the three pillars of democracy, albeit on different scales. In his own words, the story of Hashimpura massacre “is a sordid saga of the relations between the Indian state and minorities, the amoral attitude of the police and a frustratingly sluggish judicial system.” According to Rai, “Hashimpura remains a disgraceful instance of the merciless and barbaric use of brute state force and a spineless, politically expedient government lying prostrate before its own men — the killers.”

Commenting on the judgement, the author categorically states that, “I have no hesitation that right from the day the investigation began, the CID was engaged in a virtual mission to save the culprits.” What made him feel thus is explained by him in the following words, “I started working on this book first by examining the documents submitted by the CID in the court. The more I immersed myself in it, the more I realised that the investigation’s focus was not on proving the charges against the accused but to botch up the enquiry and create such confusing circumstances that no court would have been able to pronounce them guilty. In fact, I often felt as if I was reading the defence’s documents instead of the prosecution’s papers, because of the clarification and explanations in favour of the accused.”

On an earlier occasion, Rai makes a very important point about the judgement – that “the verdict was indeed unfortunate, but not entirely unexpected” He further adds, “Having said that, I wouldn’t have been happy even if all the sixteen accused persons were taken to jail in police vans, with their heads hanging in shame.” The reason, according to Rai, is that it is almost impossible for an ordinary sub-inspector, with only the help of the subordinates to execute a pogrom like this. “The sub-inspector neither had the official authority to take such a dreadful decision singlehandedly, nor would his subordinates implement his orders without a surety of impunity,” explains the author adding, “It is obvious that such command and the attached obvious assurance to the killers that no action would follow, had come from very senior office of some powerful politician.”

In short, the book is not just a narrative of what has happened in the case of the Hashimpura massacre, but is also a much needed and nuanced commentary on the way impunity is practiced by our system, especially in cases of communal violence carried out by state actors. The author takes extra care to avoid getting entangled in rumors and unverified claims about the case. In order to substantiate his arguments and opinions, he relies heavily on court documents, such as chargesheets and case diaries, apart from survivors’ narratives and his own memory. Thus, the book cannot be dismissed as thea rant of a frustrated police officer who, after his retirement, wants to be in limelight.

In addition to Hashimpura 22 May, Curfew In the City, a novella by Rai, which was originally written in Hindi and first published just a year after the massacre, is also a must read. Set in Allahabad in the 1980s, the novella is an excellent account of life during a communal riot. While reading it, one feels like revisiting the evidence and arguments presented by noted political scientist Paul Brass’s in his essay, ‘Collective Violence, Human Rights, and the Politics of Curfew’ published in his seminal book, Forms of Collective Violence: Riots, Pogroms, and Genocide in Modern India.

Mahtab Alam is an activist and writer. He tweets @MahtabNama