When a Greek God Brought Wine to India

An ancient epic poem recounts the 'Indian war' of Dionysus.

The triumph of Dionysus, depicted on a 2nd-century Roman sarcophagus. Dionysus rides in a chariot drawn by panthers; his procession includes elephants and other exotic animals. Credit: Wikimedia Commons

Alexander the Great spent only a few years in the Indian subcontinent and his conquests there were short-lived. After campaigning along the Indus river and its tributaries from 327 to 325 BCE, he left the region, never to return. But the impact of the encounter between Alexander’s Greek army and the Indian world was enormous. From the ‘Greco-Bactrian‘ kingdom of Central Asia to the legends of Alexander’s dialogue with a Brahmin, the Macedonian leader’s campaign shaped politics and culture across the ancient world for centuries to come. One of the strangest and most striking products of that legacy emerged several hundred years later, in the form of ancient Greek literature’s last and longest epic poem: the Dionysiaca. Written just as the worship of the Greek gods was about to disappear in favour of Christianity, the Dionysiaca sprawls over more than 20,000 lines (almost as long as The Iliad and The Odyssey put together). Its author, Nonnus of Panopolis, wove dozens of myths around a central story: the conquest of India.

Nonnus was born in Panopolis (today Akhmim), a city in southern Egypt with large Greek-speaking and Christian communities. Almost nothing is known about his life. Scholars can say with certainty neither when he was born nor when he died. They date Nonnus’s Dionysiaca to sometime between the last decades of the fourth century CE and the first decades of the fifth. This was a time of great political strife and far-reaching cultural change in the Roman Empire, as Germanic tribes swept over the northern borders and Christian emperors imposed their faith as the official religion. Nonnus himself seems to have become a Christian at some point during his life, composing a poetic retelling of the Book of Revelations. But he is most famous as the last great writer to celebrate the gods of ancient Greece.

The India-conquering hero of Nonnus’s great poem was not Alexander, but Dionysus, the Greek god of wine. Legends had long connected Dionysus with Asia. He was supposed to have come to Greece from the East on a chariot pulled by exotic panthers, after having taught the art of wine-making to various Asian cultures. Nonnus transformed these stories and added to them every other available story about Dionysus from Greek literature. He created a poem of unprecedented length and scope, which is at once a catalogue of myths summing up a thousand years of Greek culture and an absurd parody of earlier epics’ themes of war and wandering.

The story of the Dionysiaca begins with Zeus, leader of the Greek gods, ordering Dionysus to travel to India, whose inhabitants refuse to worship him. The Indians stubbornly prefer their ancestral gods of fire and water. Worse still, they refuse to drink wine, Dionysus’s “care-forgetting vintage”. Dionysus gathers an enormous army. As it marches across the ancient world to India, he also collects a number of lovers. His foe is Deriades, ruler of India and son of the Jhelum river (where Alexander had fought Porus centuries before). Deriades, being half river himself, drinks only water. He scorns Dionysus’s beverage, insisting that “my wine is the spear”. Helped by Brahmins versed in sorcery, Deriades fights several battles with Dionysus before finally succumbing to the god’s power. Like Alexander, Dionysus then returns home after his victory, with several more love affairs along the way.

Nonnus was by no means an expert on India, even by the standards of his own time and place; his vision of it is filled with fabulous, inaccurate details. But he picked up some elements from earlier Greek reports. The idea that Indians worship fire and water, for example, may have been a garbled reference to Zoroastrian fire temples and the sacred status of the Ganges. Brahmins and yogis, who had long fascinated the Greeks with their ascetic lifestyles, philosophical prowess and supposed magic powers, appear several times in the Dionysiaca, always as formidable figures. Since Nonnus knew nothing about Indian history but apparently believed that every great people must have been founded by a hero, he invented Indos, a titan who had supposedly fought with Zeus himself and fathered the ‘Indian race’. 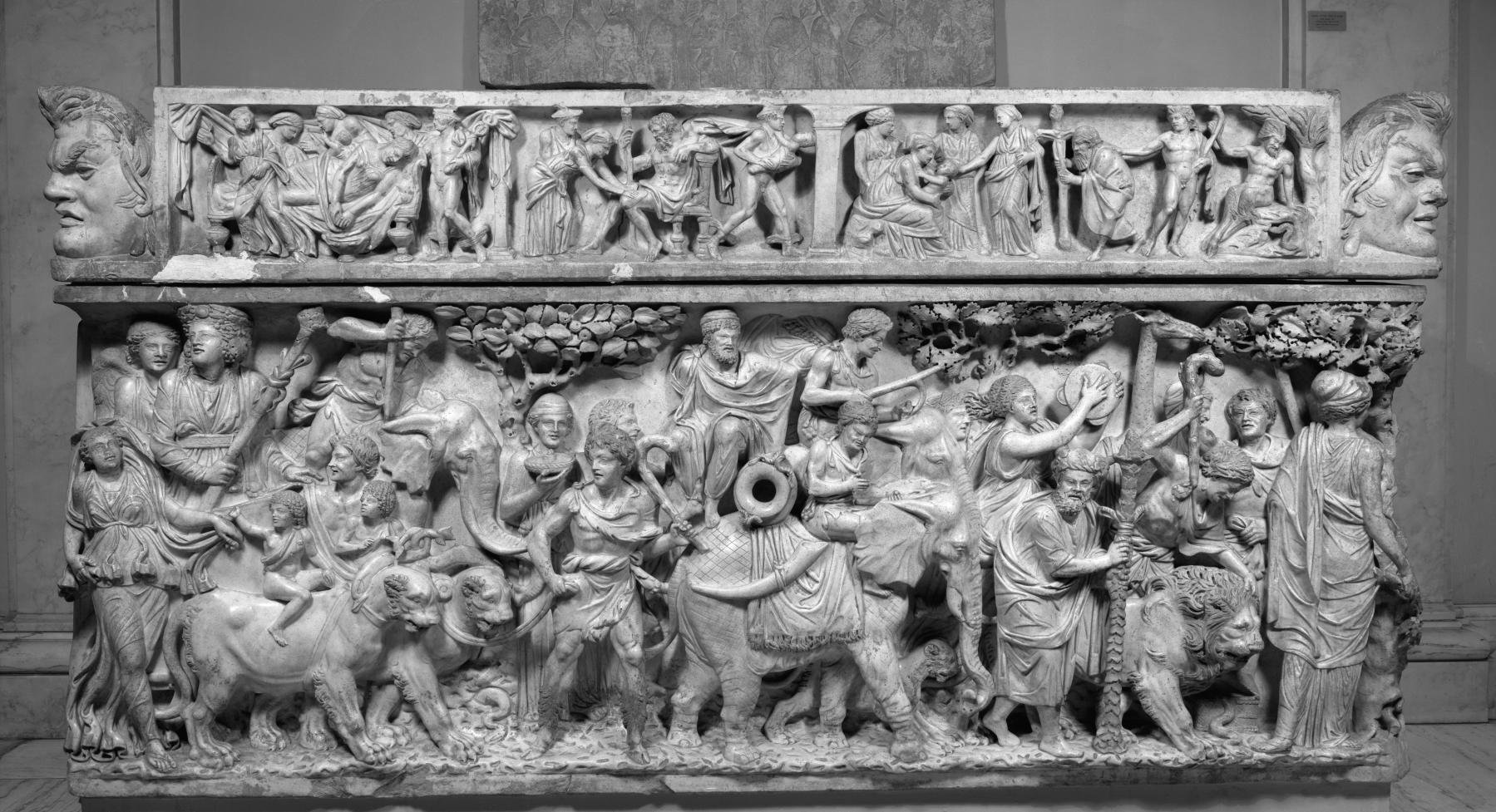 The triumph of Dionysus depicted on a 2nd-century Roman sarcophagus. Dionysus rides in a chariot drawn by panthers; his procession includes elephants and other ‘exotic’ animals. Credit: Wikimedia Commons

The Dionysiaca was forgotten for much of the Middle Ages, but it was rediscovered in the 17th century. Translated into French, Italian and other European languages, its complicated, intertwining stories, shifts among different genres and erudite mastery of classical myth inspired Baroque poets as well as painters like Nicolas Poussin. Later, as Indian literary classics like the Mahabharata and the Ramayana became more familiar to Europeans, scholars in the West began to ponder their possible connections to Nonnus’s poem. William Jones was one of the several Orientalists of the 18th century to suggest that the Ramayana might have influenced the Dionysiaca. Indeed Jones, who had claimed to have read the Dionysiaca “with great eagerness when I was very young” believed that a comparison of the two poems might show Dionysus and Rama “to have been the same person”!

Modern scholarship has refuted such fantastical hypotheses, but Jones deserves credit for being one of the first thinkers to compare Europe and India’s classical literary traditions. His enthusiasm for the Dionysiaca was transmitted to future generations, as a small but devoted group of readers, from literary greats like the Belgian novelist Marguerite Yourcenar to the French mystic Simone Veil, kept European interest in Nonnus alive. A massive new translation finished a decade ago under the supervision of Francis Vian, has renewed scholarly interest, with particular attention being paid to connections to the Dionysiaca and Asian cultures. Perhaps Dionysus will conquer the world again.