What the Silence Over Rana Ayyub's 'Gujarat Files' Tells Us

Far from clamouring for the videos tapes of Ayyub's sting operation, Modi partisans have maintained a studied silence. Is it simply because they are cowards, or because they have accepted its truth? 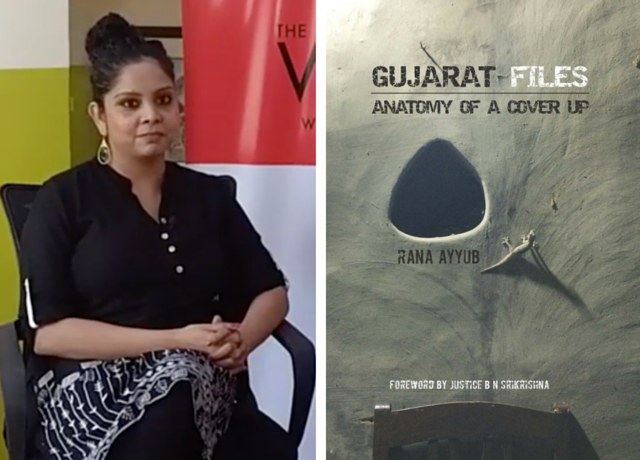 Rana Ayyub, author of 'Gujarat Files: The Anatomy of a Cover-Up'.

First, a disclosure. I was given an advance copy of Gujarat Files as I was due to be on the panel discussion a few weeks ago marking its release in Delhi. On reading the advance copy of this explosive book based on a sting operation, I suggested to its author, Rana Ayyub, that she put the video tapes in the public domain. This would demonstrate the fidelity of the transcripts published by her. After all, the sting was about highly polarising crimes that had taken place on Narendra Modi’s watch, in his earlier avatar as chief minister of Gujarat. It would be but natural, I thought, for Modi partisans to insist on seeing the persons on the receiving end of the operation actually say the damaging things attributed to them in the book. While Ayyub had her own good reasons for disregarding my suggestion, I could not have been, in retrospect, more inaccurate in my forecast.

The silence of trolls and VIPs

Far from clamouring for the videos, those partisans, who include a substantial part of the mainstream media, have maintained a studied silence. This is despite the fact that the sting featuring key members of the erstwhile Modi regime in Gujarat punches holes in the carefully constructed official narrative on the post-Godhra carnage and the fake encounters. Nobody from the government or the ruling party has apparently been provoked enough to react to the book, let alone challenge Ayyub to submit her videos for forensic examination. Modi’s supporters have turned out to be more cowardly than I thought they were. Though my book on Gujarat too had been greeted with silence from them, I assumed it was because my study was based primarily on official documents, which are hard to contest. But as stings are a controversial source of information, I thought Modi supporters would be emboldened to question the rigour of Ayyub’s book in the absence of any video corroboration. That they instead steered clear of her book betrays a slide into a post-truth world, even as their leader revels in invoking the national motto of satyameva jayate.

Equally telling is the silence on the part of the dignitaries who had been inveigled by Rana into speaking their mind before spy cameras – in the process committing indiscretions that show themselves and Modi in a bad light. The persons featured in the operation who have remained tight-lipped in the month since the publication of the book include Ashok Narayan, who was the home secretary of Gujarat during the riots, K. Chakravarthi, who was the state police chief at the time, and P. C. Pande, who was then the police commissioner of Ahmedabad, the worst-hit area. Such silence, among the persons in the sting as well as in the larger community of Modi bhakts, is ironic given the hurdles Ayyub faced in bringing to light the undercover investigation she had conducted more than five years ago.

No support from Tehelka or publishers

The first hurdle was that Tehelka, the publication most reputed for its sting operations, baulked at carrying this one despite sending Ayyub to Gujarat on such a hazardous mission. Then, when Ayyub turned her transcripts into a book manuscript, a succession of publishers apparently backed out from publishing, forcing her eventually to self-publish it. Had they known that this sting, whatever its shortcomings, was actually going to stun the affected sections into silence, Tehelka and the book publishers would perhaps have been less apprehensive about taking it up. After all, the book stormed onto the bestseller list on Amazon, despite the low rating found to have been given by Modi trolls without even reading it. For all its rough edges owing to a lack of editorial support, the self-published book has resonated widely as it arrived at a time when the people of India have been increasingly disenchanted with the prospect of achhe din promised by Modi.

Tehelka’s calls off the sting

There are more important “what if” questions relating to Tehelka, which commissioned the sting and is therefore the legal owner of the master tapes. Tehelka came into possession of the entire set of the master tapes for the sting, which stretched over eight months, by April 2011. That was when its then editors, Tarun Tejpal and Shoma Chaudhary, called off the sting. This was shortly after Ayyub had (with Pande’s unwitting help) managed to meet  even Modi. As a result Ayyub, posing as a documentary filmmaker from the US, could not go beyond an introductory meeting.

Displaying a couple of books on Barack Obama on his table, Modi apparently called the American president his inspiration. Had she met him again, as apparently was scheduled shortly thereafter, Ayyub might have recorded Modi talking about things more relevant to the operation. With its decision to scrap the sting in April 2011, Tehelka appears to have missed an opportunity to effect a course-correction in the Supreme Court-monitored SIT probe into allegations of high-level conspiracy behind the post-Godhra violence.

The opportunity arose from the sheer coincidence that while Ayyub was in the thick of her sting, the Supreme Court in November 2010 appointed senior advocate Raju Ramachandran as amicus curiae to tender independent advice on the course of the SIT probe. When Ramachandran recommended further investigation against Modi in his interim report three months later, it was solely on the testimony of police officer Sanjiv Bhatt, who had claimed to have seen his superiors being instructed by the chief minister, at an official meeting, to let Hindu mobs avenge the Godhra incident. But, according to the book, the officers stung by Ayyub debunked Bhatt’s allegation even as they made statements incriminating Modi otherwise. When he had any illegal directions to give, Modi, they said, did so quietly on a one-on-one basis with those close to him.

A missed opportunity for the amicus curiae

Had Tehelka not withheld the publication of the sting, Ramachandran might have gotten to see its sensational contents before he submitted his final report on July 25, 2011. Instead of relying only on Bhatt’s allegations, the amicus curiae might have considered the wealth of other evidence on record to back his inference that Modi had not taken “any decisive action” on the first day of the post-Godhra massacres. Such a change in approach from the amicus curiae might in turn have made it harder for the SIT to get away with a blatant cover-up.

The tone and substance of what two of the highest officers of the Modi regime in 2002, Narayan and Chakravarthi, said about their chief minister in the course of the sting operation also calls for a review of the question posed by Rajdeep Sardesai in his book on the 2014 election. Was Modi just “incompetent” (as he had then been in office for just five months) or was he “complicit” (due to his proximity to the VHP)? While Sardesai gave him the benefit of the doubt, Narayan and Chakravarthi clearly considered Modi complicit in the violence. Modi’s followers did too, which is why they hailed him as Hindu hriday samrat in the wake of 2002. They are unlikely to have regarded him so unless they thought he had put Muslims in their place. Little wonder then that they have shown no curiosity to see the videos of Ayyub’s sting. They have already accepted its truth. That said, I still believe the book will have a greater impact if and when Ayyub makes the videos public.

Manoj Mitta is the author of The Fiction of Fact-Finding: Modi and Godhra.