A new collection brings together the former DU professor’s letters and poetry written from jail.

New Delhi: “…I am not fortunate enough to write to my love in Telugu. She can appreciate my letters only if I write to her in our mother tongue. She also wants to write letters to me in our language, but again they are not allowed. We use aunty tongue or uncle tongue.”

In an August 31, 2017 letter to Anjum – a fictional character from Arundhati Roy’s novel The Ministry of Utmost Happiness – G.N. Saibaba talks of one of the many things the state has taken away from him: the ability to communicate with the love of his life in their shared mother tongue. Saibaba has been lodged in the Nagpur Central Jail since May 9, 2014, and since the jail authorities there cannot censor letters coming in and out in Telugu, Saibaba and his wife, A.S. Vasantha Kumari, have been told they can only communicate in Hindi or English. This is true even when she is able to briefly meet him during a mulakat in jail – they are unable to converse in the language that binds them. So “aunty tongue or uncle tongue” it has to be.

In an introduction to a new collection of Saibaba’s poetry and letters written while in prison and published by Speaking Tiger, Why Do You Fear My Way So Much?, Kumari too laments the loss of their shared tongue: “In these seven years, you were forbidden to read or write in Telugu, our mother tongue. You must only have imagined how much more agonising this was for me. I am not well-versed in English and can only write in this language.”

“The fact that someone’s mother tongue is denied is like cutting someone’s throat,” said author and rights activist Meena Kandasamy at the launch of Saibaba’s book in Delhi on Wednesday (May 4) evening. “That has not yet happened to us; we still have our voices. We must use them for as long as we can to speak against injustice.”

Saibaba, a former professor of English at Delhi University’s Ram Lal Anand College, suffered from polio as a child. The disease left him unable to walk; today, he is 90% disabled. In 2017, a Maharashtra court sentenced him to life imprisonment for allegedly having Maoist links. He had been charged under the Unlawful Activities (Prevention) Act. Since then, multiple bail and parole applications have been rejected, despite Saibaba suffering from a number of serious medical ailments. In 2021, the college he taught at removed him from his position.

Since the pandemic began, Saibaba has contracted COVID-19 twice in prison; his health is a constant source of anxiety for his wife and daughter. The ‘anda cell’ where he is lodged in solitary confinement – named so because of its egg-like shape – is half covered by a roof, the rest has only an iron grill, “letting in the rain, sleet and scorching rays of the sun”, Kumari’s introduction describes.

“The whole case is a conspiracy. There is no crime and no evidence,” Kumari said at Monday’s launch. “All we have done is dream of a more equal world; a world where nobody is lacking food or shelter. This dream doesn’t harm anybody – yet in it, they [the state] see a conspiracy. Because they can’t bear an ideology that opposes them.” A.S. Vasantha Kumari speaking at the launch of Saibaba’s book. Photo: The Wire

D. Raja, general secretary of the Communist Party of India, said that the release of Saibaba’s book must also be accompanied by the demand for his release from prison. “There is no justification for keeping Saibaba in jail,” Raja argued. Quoting Saibaba himself, Raja said he too believed that the “political tyranny” India is witnessing will come to an end.

Author and rights activist Arundhati Roy talked about how she, Saibaba, Gautam Navlakha, S.A.R. Geelani, Surendra Gadling and others had campaigned against Operation Green Hunt in Chhattisgarh. All the others, she noted, had since been arrested, as had many other rights activists and political leaders. “At the time, the state decided that the intellectuals were the real terrorists.”

“Anand Teltumbde,” Roy continued, “is one of the most important intellectuals of our time; his thinking is where the Left meets the anti-caste movement. And that’s why he’s in jail. That’s why Sai is in jail. That’s why Umar Khalid is in jail. …To be truly revolutionary, you have to understand Left politics, caste, communalism, the capitalist-corporate centres of power. That’s why people like Sai [who understand and talk about those links] are feared by the powers that be.” 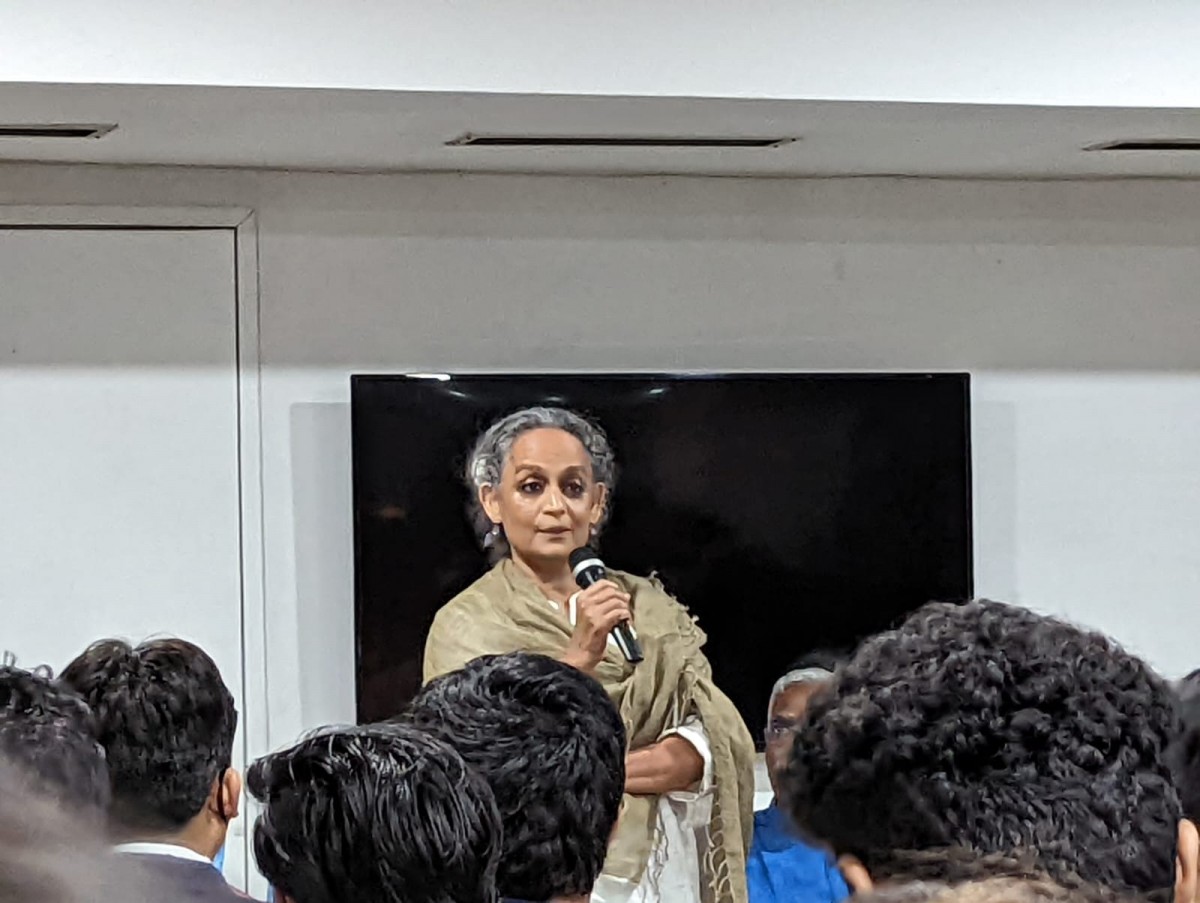 Arundhati Roy speaking at the launch of G.N. Saibaba’s book. Photo: The Wire

The remarkable thing about Saibaba and his poetry, Kandasamy said, is that despite everything, his words portray a “radical optimism”. “These are political poems, but they also read like love letters to his wife, and like letters of love to his friends. Alongside, they also read like letters of warning for the rest of us: if we want to produce a world outside of Hindutva, we have to struggle, and struggle collectively. We need the radical optimism of his poetry.”

Books, poems and letters, Kumari said, are what have kept Saibaba going in prison, even as he suffers due to his isolation and deteriorating health. In many of his poems, Saibaba reiterates hope for struggle, for love that conquers hate, even as he recalls and laments the tyrannies both inside and outside the jail.

In ‘How Beautiful to Wait for Your Visit’, a poem written to his wife in 2018, he says:

marauding the human passions of everyday
social life. My cage prohibits all relations
and bans love proscribing the language
of hearts, as the woman behind me

reminds, ‘Speak only in Hindi’, while you
stand on the other side of the opaque
fibreglass window; words fail me, as though
I have forgotten out language of love and intimacy,

and you become a stranger to me from
this world of high walls. How painful to talk across
the window of surveillance over the daggers hanging
on my head from behind seeking to stab

our hearts brutally in cold blood.
I know you travel thousands of miles
to say a few words to comfort my soul
under the siege. The few minutes granted to us

odds in the strangest of times. Your much awaited
visit each time turns turbulently painful for both of us.
Yes, as Nazim Hikmet says, ‘living is a matter of hope,
my love, living is a serious business, like loving you’.

The idea that despite all odds, the struggle for a better world must continue is one that is reiterated in many of Saibaba’s poems and letters. As he says to Kumari in a letter meant to reach her on her birthday, “Don’t get disheartened in these dark days. We should not lose our hopes and dreams for the darkness can’t permanently overshadow the light. These are not empty words. These are not rhetorical phrases. History has proved several times over that our dreams are not empty ones. Our hopes are not idealistic nonsense. We will win.”