George Orwell, Who Hated Purple Prose as Much as He Hated Injustice

The powerful simplicity of Orwell’s prose was the perfect literary vehicle for his worldview. 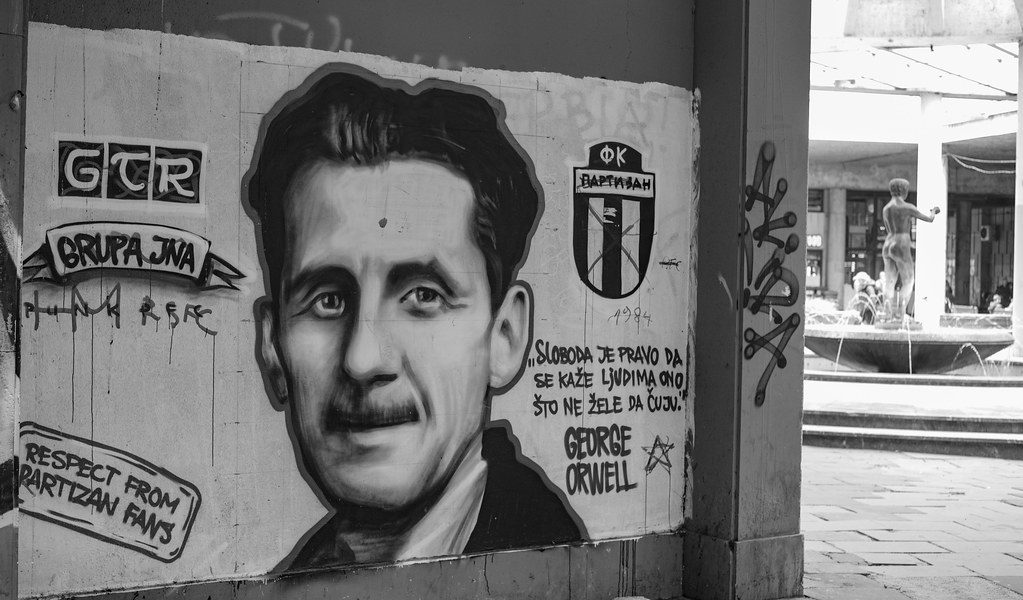 George Orwell the professional writer worked by the exact same code that Orwell the man lived all his life by. This is probably true of some other great writers and artists, too, but not quite to the extent that it was true in Orwell’s case.

The code that George Orwell lived and wrote by can be squeezed into two simple words: honesty and unpretentiousness. In life as in his writing, he was an implacable enemy of humbug and hypocrisy, of pompousness as much as of mawkishness.

In the 1946 essay titled Politics and the English Language, he went so far as to put down on paper his professional code of conduct, and did so with characteristic candidness:

Do these words of advice (to the aspiring writer of non-fictional prose) come across as dreary and bland?

Maybe they do, but anyone who has thought of taking the business of writing seriously knows how extraordinarily hard it can get to try and follow Orwell’s advice.

In the essay, Orwell quotes copiously from many contemporary sources to show how clumsy, even ugly, prose can become if these simple precepts are lost sight of. The most hilarious of Orwell’s examples comes from the venerable Professor Harold Laski, no less:

I am not, indeed, sure whether it is not true to say that the Milton who once seemed not unlike a seventeenth-century Shelley had not become, out of an experience ever more bitter in each year, more alien to the founder of that Jesuit sect which nothing could induce him to tolerate.

Orwell believed that cluttered, ponderous prose was as much a product of lazy writing as of muddled thinking. And he was convinced that just as thought corrupts language, so can language also corrupt thought. In other words, unless a writer can break free of the shackles of (what seems to him to be) a properly sophisticated manner of writing, he cannot begin to think straight and clearly.

He can think up something fresh to write about, begin to write in dead earnest but, soon enough, the time-tested ‘high’ literary style – with its lazy similes, its tired witticisms and clichéd turns of phrase – takes over, and the essay inexorably heads toward a morass where all thought bogs down, to eventually drown without a trace of the nice and original things that inspired the piece in the first place.

It can be said that Orwell’s own prose checks all the ‘how to’ boxes that the essay sets down, but the pleasure of reading an Orwell essay can hardly be broken down into a compliance check. Consider Reflections on Gandhi, for example, which opens brilliantly with this observation:

Saints should always be judged guilty until they are proved innocent, but the tests that have to be applied to them are not, of course, the same in all cases.

Written about a year after Gandhi’s death – and one year before Orwell’s own – this piece looks at Gandhi’s life and work through the prism of his autobiography.

Orwell finds in Gandhi much that is unappealing: his near-deification of “homespun cloth, ‘soul forces’ and vegetarianism”, for example, or the fact that “his mediaevalist programme was obviously not viable in a backward, starving, overpopulated country”; Orwell also believed that “the British were making use of him” – his exertions to ensure there was no violence against the British rule worked presumably to the colonisers’ advantage – “or thought they were making use of him”.

Orwell also thinks that those on the Left – he mentions Anarchists and pacifists in particular – who were claiming Gandhi as one of their own, were deluding themselves, because they were clearly ignoring ‘the other-worldly, anti-humanist tendency of his doctrine’ which made it impossible to square his teachings ‘with the belief that Man is the measure of all things, and that our job is to make life worth living on this earth, which is the only earth we have’.

But he goes on to pay Gandhi a memorable – if somewhat uncustomary –tribute:

One may feel, as I do, a sort of aesthetic distaste for Gandhi, one may reject the claims of sainthood made on his behalf (he never made any such claim himself, by the way), one may also reject sainthood as an ideal and therefore feel that Gandhi’s basic aims were anti-human and reactionary: but regarded simply as a politician, and compared with the other leading political figures of our time, how clean a smell he has managed to leave behind!

One suspects that the reason why Orwell in the end thought Gandhi superior to most other contemporary politicians was simply this: unlike the others, Gandhi meant what he said, he was not sanctimonious or phoney. Let’s recall that around the time that he wrote this essay on Gandhi, Orwell was also finishing his last major work of fiction, 1984. Simplicity of manner and honesty of purpose meant everything to a man tormented endlessly by nightmares of the Apocalypse.

Orwell’s ability to invest the quotidian, the unremarkable with meaning comes across powerfully in the 1946 piece Some Thoughts on the Common Toad. The celebration of spring is a hoary literary tradition, but to associate its spectacular arrival with the waking-up, after the long sleep-laden winter, of the unglamorous common toad is a supreme feat of the artistic imagination:

At this period, after his long fast, the toad has a very spiritual look, like a strict Anglo-Catholic towards the end of Lent. His movements are languid but purposeful, his body is shrunken, and by contrast his eyes look abnormally large. This allows us to notice, what one might not at another time, that a toad has about the most beautiful eye of any living creature. It is like gold, or more exactly it is like the golden-coloured semi-precious stone which one sometimes sees in signet-rings….

As for spring, Orwell reminds us, ‘not even the narrow and gloomy streets round the Bank of England are quite able to exclude it’. He goes on to sing this lively paean to one of the enduring pleasures of being simply alive:

So long as you are not actually ill, hungry, frightened or immured in a prison or a holiday camp, spring is still spring. The atom bombs are piling up in factories, the police are prowling through the cities, the lies are streaming from the loud-speakers, but the earth is still going round the sun, and neither the dictators nor the bureaucrats, deeply as they disapprove of the process, are able to prevent it. 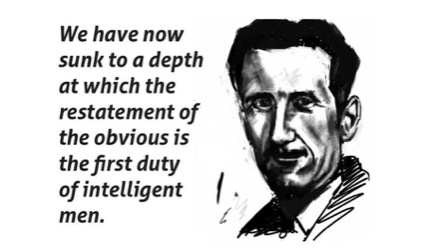 Orwell is on record that he wrote lifeless stuff when he lacked a political purpose to write, whether it was fiction or non-fiction. He perceived ‘political’ in the broad sense of being rooted in the human condition, in other words in the lived understanding of reality.

Just as the humble toad, freshly arisen from long, wintry slumber, links up effortlessly with the defiance of dictators and bureaucrats, so does a European colonist’s shooting of an irate – but possibly harmless – elephant in a Burmese town tie into the white man’s burden in Shooting an Elephant. The Englishman knows that he should leave the elephant alone, but

I had got to shoot the elephant…. A sahib has got to act like a sahib; he has got to appear resolute, to know his own mind and do definite things. To come all that way, with two thousand people marching at my heels, and then to trail feebly away, having done nothing –no, that was impossible. The crowd would laugh at me. And my whole life, every white man’s life in the East, was one long struggle not to be laughed at.

So the gun is cocked, the trigger released, and out flies the bullet, and a mysterious, terrible change comes over the elephant.

‘He neither stirred nor fell, but every line of his body had altered. He looked suddenly stricken, shrunken, immensely old. …. At last… he sagged flabbily to his knees. His mouth slobbered. An enormous senility seemed to have settled upon him’.

As the European leaves the scene, having done his duty by the lofty name of his race, he wonders if any of the others present grasped that he had done what he had done solely to avoid looking like a fool.

Also read: There’s No Hope Among the Proles

It is on the here and now that Orwell is focussed, on the concrete, the solidity of objects, the surface of the earth he is walking on. The Spanish Civil War was a watershed in his personal and moral history, as he said more than once, notably in Why I Write (1946):

‘The Spanish war and other events in 1936-37 turned the scale and thereafter I knew where I stood’.

And yet, writing about his time in the War, in Looking Back on the Spanish War (1942), he most readily and vividly remembers the least consequential of his experiences in the war: the wind-swept cavalry barracks where they trained before being sent out to the front; the icy-old water of the pump where they washed; the roll-call of the early mornings where his ‘prosaic English name made a sort of comic interlude among resounding Spanish ones’; the militia women in trousers chopping firewood…. He volunteered to fight because, in the circumstances, that seemed the only conceivable thing to do, but be never shrinks from actively demythifying for the reader the story of the war.

‘The essential horror of army life’, he freely confesses, ‘is barely affected by the nature of the war you happen to be fighting in’.

Besides, the Civil War also turned out to be a humongous tragedy – looking back, it indeed seemed to Orwell to have been a tragedy foretold. But that doesn’t stop Orwell from believing that it was a ‘just’ war, that it needed to be fought, regardless of the outcome.

The question is very simple. Shall people like the Italian soldier (an illiterate, poor working-class volunteer from Mussolini’s Italy who had thrown in his lot with the Spanish Republic and whose acquaintance Orwell had briefly made at the war’s beginning) be allowed to live the decent, fully human life which is now technically feasible, or shan’t they? Shall the common man be pushed back into the mud, or shall he not? I myself believe, perhaps on insufficient grounds, that the common man will win his fight sooner or later, but I want it to be sooner and not later – some time within the next hundred years, say, and not some time within the next ten thousand years. That was the real issue of the Spanish war, and of the present war, and perhaps of other wars yet to come.

This, then, is the essential Orwell. The powerful simplicity of his prose is the perfect artistic vehicle for his uncomplicated worldview, which consisted in a belief in justice and the equality of all men. And in the deeply-held conviction that no amount of rhetorical grandstanding would help the cause of equality and justice.

Anjan Basu is a literary critic, commentator and translator. He can be reached at basuanjan52@gmail.com