Gauri Lankesh: The Life Before Death

Gauri was everything that the Sangh loves to hate – a fearless and opinionated single woman, an extremely important voice against Hindutva and someone who wrote extensively against caste. 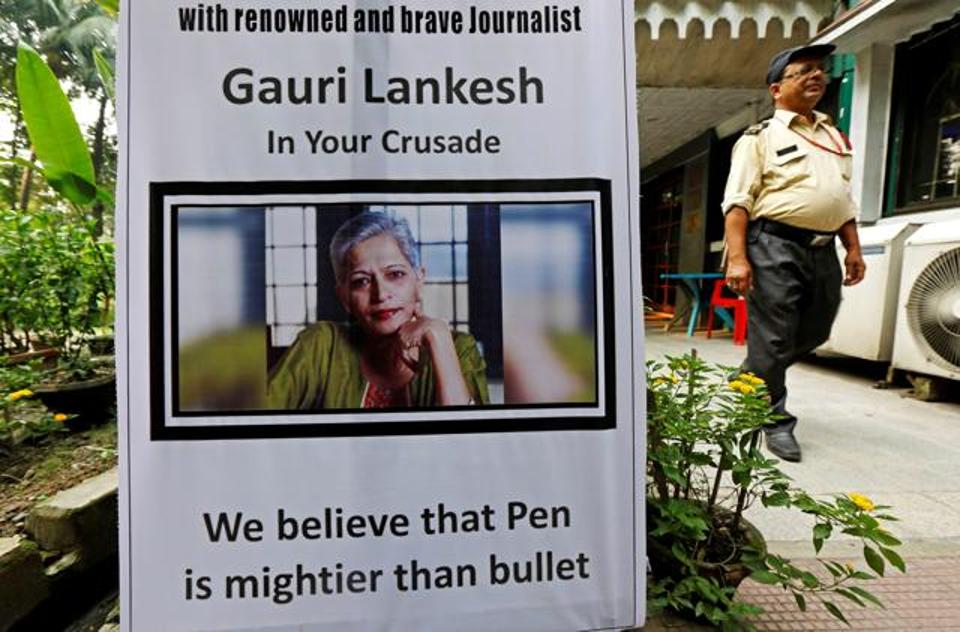 A security guard walks past a placard installed at the Press Club of Kolkata in solidarity with Gauri Lankesh. Credit: Reuters Sometime in the first week of August this year, an extremely perturbed Gauri Lankesh messaged me on WhatsApp. Earlier in the day, a student rally attended by Kanhaiya Kumar had been attacked by right-wing goons. We had a brief conversation, she told me to be careful when I travelled and signed off the conversation inviting me to her home in Bangalore.

A month later, she was shot dead outside her home. Journalists, academics, common citizens and students gathered outside the Press Club of India in Delhi the next day to protest this murder. I was called out to speak. Unable to gather my thoughts in shock and rage, I did not know what to say. I just took out my phone, and read out this month-old message.

“I will not be able to bear it, if anything happens to any of you,” she had told me. As I read this out, Gauri was already dead, I was still alive. How was I supposed to bear this loss now – a friend so brutally snatched away from us? The only thing I knew was that her murderers are not going to achieve their objective of silencing us through this cowardly act. It had the opposite effect as thousands of people flocked to the streets in different parts of the country in protest with #IAmGauri slogans.

But who exactly was Gauri? I had gotten to know her only in the last six months before her assassination. The first time I met her was at a student protest, which she had also joined. She called me up to a side, introduced herself to me and in the same breath stated that I was one of her ‘adopted ideological sons’. Subsequently every time we met, she would bring gifts as a mother might do for her child, and remain in regular touch in the intervening period.

It was only after her assassination that I became aware of the fact that she had been receiving threats for her work and words. On all those occasions, while she called me up to enquire about my safety, she never mentioned the threats to her.
Gauri was everything that the Sangh loves to hate – a fearless and opinionated single woman, an extremely important voice against Hindutva and someone who wrote extensively against caste. At a time when several journalists have aligned themselves closely with power, she kept the true meaning of journalism alive by speaking truth to power.

Gauri did not take the threats seriously. Even on the occasions when she called me up asking after my safety, her concern never entailed asking me to leave or even dilute what I was doing. 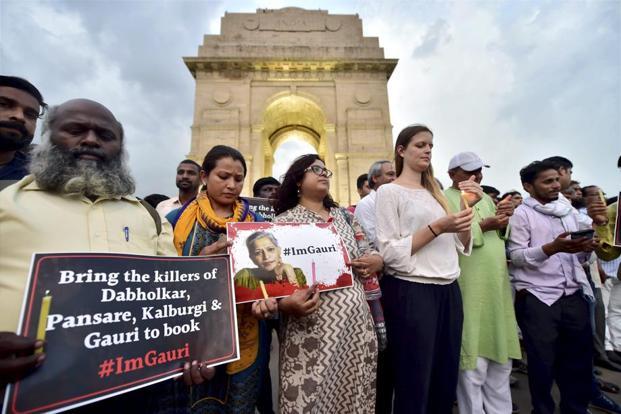 She was a mother to most of us in the Brechtian sense – Mother Courage – one who epitomised strength and fearlessness. Our age difference never mattered as we could speak to each other regarding everything from politics to different social movements and even relationships. Later, as obituaries started pouring in, I found that this was how Gauri was with most people she became acquainted with.

Several people have already written extensively about the manner in which she served as a bridge between various democratic struggles in Karnataka. The inability of similar forces in Delhi to do the same, and especially the growing rift between Left forces and Ambedkarite forces in JNU, troubled her greatly. She spoke to me about it on more than one occasion and described it as extremely frustrating and unfortunate.

I told her that this unity will take a long time to materialise, given that there was a legacy of mistrust on each side. She, on the other hand, saw the extreme urgency of an alliance to counter the RSS, a common cause which would alleviate the historical mistrust on either side. The bullets pumped into her, apart from other things, were also intended to eliminate someone who had the potential to build bridges between different movements, specifically the anti-caste and the Left movements. With Gauri no longer there amongst us, I leave it to the two sides to determine if they see any worth in her words.

Also read: Gauri Lankesh’s Argument Has Not Been Laid to Rest

The stench of death is all around us – of farmers committing suicide in the forests and the fields, Muslims and Dalits lynched by murderous mobs, students ending their lives in the universities or children choking to death in ill-equipped hospitals. Add to that a lot of blood on the streets – of dissidents, their voices abruptly silenced.

Gauri had a distinctive voice. At times, I can still hear it echo in my ears. I still hope that my phone will ring and I get to hear that laughter. I know that it won’t happen anymore. But the real tribute to her legacy would be to keep that laughter alive, to keep life itself alive. Let’s not forget how Gauri died, but let us also continue to remember how she lived.

Excerpted with permission from The Way I See It: A Gauri Lankesh Reader edited by Chandan Gowda and published by Navayana and DC Books.