The Shining Women of Kashmir

Freny Manecksha’s Behold, I Shine: Narratives of Kashmir’s Women and Children brings women and their challenges to the front and centre, bringing the reader into the very home of Kashmiris. 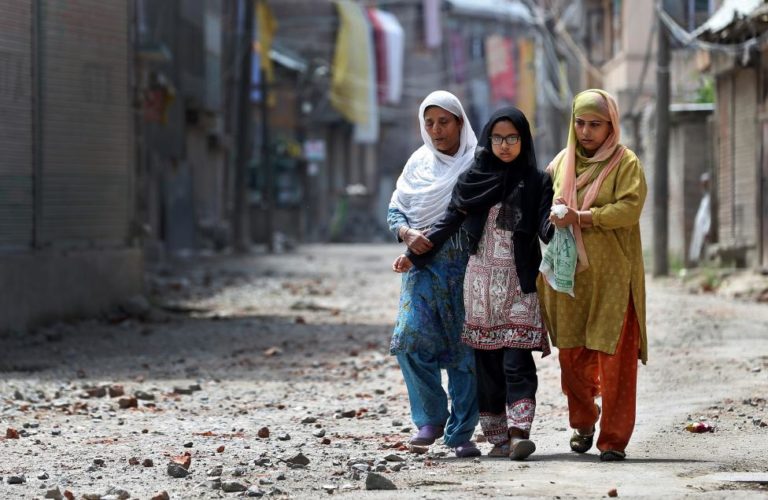 Two women and a girl make their way along a street littered with rocks thrown by protestors in Srinagar as the city remains under curfew following weeks of violence in Kashmir August 19, 2016. REUTERS/Cathal McNaughton

A few years ago I had the pleasure of listening to Mossarat Qadeem of the Paiman Trust. Speaking of her work in Pakistan’s Khyber Pakhtunwa and the Federally Administered Tribal Areas, she offered an interesting insight into women in conflict. According to her, one of the militant commander’s in the region used to set aside an hour or two of radio time in the evening to deal with women’s issues. He was the only one in the community who bothered to do so. Consequently for many of the women, he was seen as a thoughtful man, and thus when their sons or brothers took up arms against the state, the women largely supported them. It was only after Qadeem had long conversations with the women that they finally asked their menfolk what exactly was happening in the fight led by this “thoughtful man”.

The striking thing about Qadeem’s story is not whether one engages with women to combat militancy or not – it is a simpler takeaway. Until her intervention, the women in the region had simply been glossed over, ignored, except by one actor. This is strikingly similar to how we do not “see” women in the Kashmir conflict, except maybe as victims. With the exception of Mehbooba Mufti, it is rare to find women featured as actors in and of themselves. The few times that Kashmiri women dissidents are featured, it is usually limited to images of Asiya Andrabi of the Dukhtaran-e-Millat is featured as ominous black cloaked figure railed at by our TV anchors.

Freny Manecksha’s Behold, I Shine: Narratives of Kashmir’s Women and Children, is a bit of a pathbreaker therefore. A set of non-fiction essays by a journalist who has been covering the region and the conflict in detail for the last few years, the slim volume brings women and their challenges and agency to the front and centre, bringing the reader into the very home of Kashmiris. There is a scene in Aamir Bashir’s remarkable film, Harud, that shows a kitchen in disarray, but it is not explained. Mubeena, one of Manecksha’s respondents, offers the subtitles to the film, “They would ask us where the militants were holed up, vandalise the kitchen, turn storage bins and jars upside down, smash utensils and leave a trail of strewn spices and grains behind them… One day, we decided to protest in our own way. I, and others like me, refused to clear the mess on the floor after a bunch of soldiers left. The next night, when another group of security men came in and asked us what happened, I told them that this was the handiwork of their fellow soldiers.”

In its own way this poignant protest – to refuse to clean a mess and try to shame those responsible for making this mess day in and day out – tells you much more about the reality of living in a situation that is out of control than any pictures of a hartal. Another such story involves a monkey.

“There was a trader in our neighbourhood,” Shazia informed me, “who was always out travelling. One day, he brought back with him an injured monkey… Soon, it became our beloved companion. One night there were gunshots. Mogli died. We learnt that the troops in the bunker had shot the monkey, mistaking its shadow for something menacing.”

As Shazia and other young children organised a coffin and a funeral procession, shouting their protests like they had seen done, they realised that the troops were also shaken, “For them Mogli was Hanuman… For us, she was a friend. And she had been killed.” 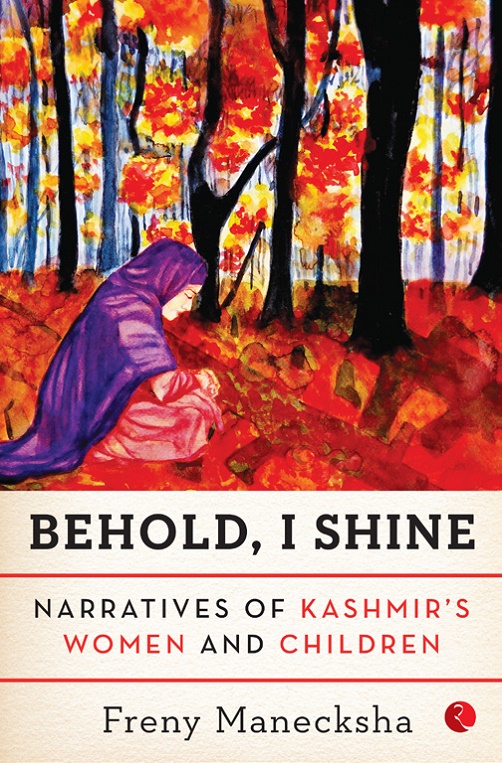 In a way, these stories, including that of a young boy who lost a thumb and had his hand half-blown off because he picked up an unexploded ordinance when on a picnic – rather than the stories of murder, torture, beatings and rape that run through the book, are more illustrative of the atmosphere that Kashmiris, who have grown up during the 1980s and after, than anything else. This is the tutoring of generation after generation to see the police and the military as forces of insecurity. More striking is the complete lack of any response mechanism beyond monetary compensation, which is itself fraught with ideas of dishonour and complicity.

As compromised as monetary compensation might be, it is at least an implicit recognition of wrongdoing and an attempt at some form of redressal. What is utterly damning is how those trying to use state institutions to deal with the wrongs done to them are left to hang out to dry. Manecksha introduces the redoubtable Parveena Ahangar, who founded the Association of the Parents of Disappeared Persons (APDP). APDP has its roots in her futile search for her son, who was 17-years-old in August 1990 when he was picked up by the National Security Guard, but it is the tale of Munawara, who has been seeking justice since 1992, that is truly eye-opening, especially her faith when she says, “Umeed hai (I have hope)” in the chapter with that title.

It is in that same chapter that Manecksha quotes from Ashok Agrwaal’s damning 2008 report, “In Search of Missing Blood”, written for the South Asia Forum for Human Rights in Kathmandu. Examining the execution of the writ of habeas corpus – long considered the most effective legal defence of liberty – in Jammu and Kashmir in 1990, the report is painful to read, indicating that throughout this time the legal recourse has been completely and utterly ineffective.

It is not easy to analyse a complete farce, particularly when the players of the farce act it out with a, seeming, air of unawareness of it. We found absurdity, capriciousness, culpable negligence, callous disregard and more. We found a court completely oblivious to its place and importance in the constitutional scheme of things; a court unwilling to acknowledge its linkages to the society in which it was situated. Yet, the Court functions: judges come and go in their siren equipped cars, shielded both by curtains on the car windows, and by the phalanx of security personnel who guard them. Perhaps guarded by the same personnel (or, at least, their brothers in arms) who disappear the people on whose behalf the judges heard habeas corpus petitions. While it delineates the horrors that Kashmiri women and children live with it, the hell within which they have been raised, Manecksha makes the mistake of a little too much sympathy. This is not so much of the stories of the people – it would be hard to be too sympathetic there – or in her even-handedness. As a journalist, she is careful about claims, and even cites an instance of when a human rights activist corrects a person speaking of assault, and the victim asks innocently how she should tell her own story. She cites the abuses committed by military forces as well as by militants. What she misses is the voices of Kashmiri Hindus – most of whom were forced to flee in 1990 (for some reason a footnote in the book puts the year as 1995, there are other mistakes, such as describing fidayeen as suicide bombers. Kashmir has not seen suicide bombings. And even the fidayeen are a later addition, mostly a Lashkar-e-Toiba tactic rather than what happened in Kashmir’s early years) – but some of those who have returned, and the colony of Ganpathyar in Srinagar, hosts a number of families. She also misses the voices of Kashmiri Sikhs, say like that of Surinder Singh Oberoi, whose piece written for the Bulletin of Atomic Scientists from the late 1990s when the bumbling Mr Doval was on the Kashmir desk at the Ministry of Home Affairs, is still well worth reading today.

More problematically she quotes, at length, from Mohamad Junaid’s essay “Stone Wars”, in which he writes, bafflingly,

Mostly, the stones hit no one. They don’t hurt the soldiers, who are always in full body armor, nor are they intended to injure. Stones are thrown from a distance where the stone throwers can outpace soldiers if chased, but this necessary distance also ensures that the stones don’t reach the soldiers. They are hurled, as a young man told me, at the “idea of domination.” They are defiance flying out of hands. Each stone follows its own line of flight out of the hegemonic code.

This is arrant nonsense. As anybody who has been near, or been part of the kani jang (stone wars) knows, stones are flung with hatred and fury and are meant to wound, and often do. This is no battle of thrown roses. It would be then just as easy to accept the government’s line that tear gas shells – that have often wounded, sometimes killed – and shotgun pellets that have blinded hundreds – are non-lethal ways to “keep peace”.

To ignore, or undersell, the deep divide, this (well-earned) anger, goes against the very marrow of Manecksha’s book, and the lessons it teaches us of growing up in horror. Afsir Karim, who served three tours of duty in J&K, and retired as a Major General (disclosure: he is a relative of mine), said that in 1965 the perfectly planned Operation Gibraltar by Pakistan was largely foiled by Kashmiris unwilling to support Pakistan. Until very late in the day the public in Kashmir did not view the security forces as violating their security, which is principally how they see them now. This is what was lost, and has not been regained, cannot be regained, if we continue to force people to grow up through violation upon violation, tutored by the government in despair, hopelessness and rage. This is also why, “Umeed hai” is the most important chapter, and the most heart-breaking.