'For Abba With Love' – Shabana Azmi's Tribute to Kaifi Azmi

On the 100th birth anniversary of Urdu poet-lyricist Kaifi Azmi, an excerpt from his book 'Kaifiyat'. 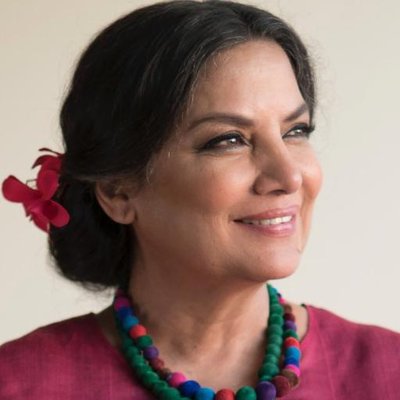 He was always different, a fact that didn’t sit too easily on my young shoulders. He didn’t go to ‘office’ or wear the normal trousers and shirt like other ‘respectable’ fathers but chose to wear a white cotton kurta-pyjama twenty-four hours of the day. He did not speak English and, worse still, I didn’t call him ‘Daddy’ like other children, but some strange-sounding ‘Abba’! I learned very quickly to avoid referring to him in front of my classmates and lied that he did some vague ‘business’! Imagine letting my school friends know that he was a poet. What on earth did that mean—a euphemism for someone who did no work?

Being my parent’s child was, for me, unconventional in every way. My school required that both parents speak English. Since neither Abba nor Mummy did, I faked my entry into school. Sultana Jafri, Sardar Jafri’s wife, pretended to be my mother and Munish Narayan Saxena, a friend of Abba’s, pretended to be my father. Once in the tenth standard, the vice principal called me and said that she’d heard my father at a recent mushaira and he looked quite different from the gentleman who had come in the morning for Parents’ Day! Understandably, I went completely blue in the face and said: ‘Oh he’s been suffering from typhoid and has lost a lot of weight, you know’ . . . and made up some sort of story to save my skin! It was no longer possible to keep Abba in the closet. He had started writing lyrics for films and one day a friend of mine said that her father had read my father’s name in the newspaper. That did it! I owned him up at once! Of all the forty children in my class, only my father’s name had appeared in the newspaper! I perceived his being ‘different’ as a virtue for the first time. I need no longer feel apologetic about his wearing a kurta-pyjama! In fact, I even brought out the black doll he had bought me. I didn’t want it when he first gave it to me. I wanted a blonde doll with blue eyes, like all the others had in my class. But he explained, in that quiet gentle way of his, that black was beautiful too and I must learn to be proud of my doll. It didn’t make sense to my seven-year-old mind but I had accepted him as ‘weird’ in any case and so I quietly hid the doll.

Three years later, I pulled it out as proof that I was a ‘different’ daughter of a ‘different’ father! In fact, I now displayed it with such newfound confidence that instead of being sniggered at by my classmates, I became an object of envy. That was the first lesson he taught me, of turning what is perceived as a disadvantage into a scoring point.

When I opened my eyes to the world, the first colour I saw was red. Till I was nine years old we lived at Red Flag Hall, a commune-like flat of the Communist Party of India (CPI). A huge red flag used to greet visitors at the entrance. It was only later that I realized red was the colour of the worker, of revolution. Each comrade’s family had just one room; the bathroom and lavatory was common. Being party members had redefined the husband–wife relationship of the whole group. Most wives were working and it became the responsibility of whichever parent was at home to look after the child. My mother was touring quite a lot with Prithvi Theatre and in her absence Abba would feed, bathe and look after both my brother Baba and me, as a matter of course.

In the beginning, Mummy had to take up a job because all the money Abba earned was handed over to the party. He was allowed to keep only Rs 40 per month which was hardly enough for a family of four. But later when we were monetarily better off and had moved to Janki Kutir, Mummy continued to work in the theatre because she loved being an actor. Once, she was to participate in the Maharashtra State Competition in the title role of Pagli. She was completely consumed by the part and would suddenly, without warning, launch into her lines in front of the dhobi, cook, etc. I was convinced she’d gone mad and started weeping with fright. Abba dropped his work and took me for a long walk on the beach. He explained that Mummy had very little time to rehearse her part and that as family it was our duty to make it possible for her to rehearse her lines as many times as she needed to or else she wouldn’t win the competition—all this to a nine-year-old child. It made me feel very adult and very included. To this day, whenever my mother is acting in a new play or new film, my father sits up with her and rehearses her cues.

She participated in his life equally; at a price of course! She fell in love with him because he was a poet. However, she learned soon enough that a poet is essentially a man of the people and she would have to share him with his countless admirers (a large number of them female!) and friends.

When I was about nine years old, I remember an evening at a big industrialist’s home. His wife, a typical socialite, announced in a rather flirtatious manner, ‘Kaifi saheb, my usual farmaish, the “Do Nigahon Ka” something something . . . You know, folks, Kaifi saheb has written this nazm in praise of me.’

And Abba, without batting an eyelid, started reciting this poem which was, in fact, written for my mother. I was outraged and started screaming that the poem was written for my mother and not for this stupid woman. A deathly silence prevailed and my mother said, ‘Hush, child, hush,’ but I am sure unke dil mein laddoo phoot rahe thay! Mummy took me into a corner and said that I wasn’t to take such things to heart—after all, ‘Abba’ was a poet and such were his ways—he didn’t seriously mean that the poem was written for this lady, etc. I would hear nothing of it. Needless to say, that was a poem Kaifi Azmi could never use again and that woman still hates me!

(You are smiling so much
What’s the sorrow you are hiding?
Dampness in your eyes, a smile on your lips
What’s your state and what are you showing?
They will turn into poison if you keep drinking
These tears that you are constantly gulping down
The wounds that time has begun to heal
Why do you insist on scraping them
Fate is a game of the lines on your palms
You are being defeated by mere lines)