Her poems wove a complex web that sustained courage as well as delicacy. 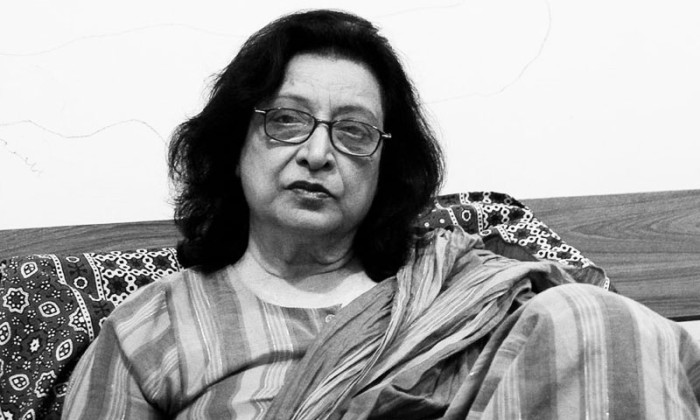 This was in 1966. She wrote this preface at the hostel of the Government Girls College in Hyderabad in Sindh.  She was barely 20.

Until then, many of her poems had been published in the journal Funoon, and she had thanked Ahmad Nadeem Qasmi for encouraging her. The poet he was encouraging would be one of the best Urdu writers at the end of the 20th century. The next 50-odd years also disproved Riaz’s prediction that soon she would have nothing to say. She gave us several volumes of poetry and at least four great novellas. In addition, she wrote Adhura Aadmi (Incomplete Man), a book adapted from the psychological and social analysis of the psychologist Erich Fromm.

She gave us a translation of selected poems from the entire oeuvre of the Iranian poetess who died young, Forough Farrokhzad, titled Khule Dareeche Se (From an Open Window). Other stories were published from time to time, and one read her book reviews, essays and other translations. She also wrote two books in English.

But first we return to those years following the publication of Fahmida Riaz’s first volume of poetry. Not only was there an individuality in her themes and her refusal to be ensconced within the customs of Urdu poetry, but along with that, the visual display of her poems was dignified and beautiful, and there was transparency in her tone.

Watch | You Turned out to Be Just Like Us – Equally Stupid: Fahmida Riaz

Despite this, readers were unprepared for the power of her second collection, Badan Dareeda (The Torn Bodied). In Urdu prose, Ismat Chughtai (1944) had written of female experiences with amazing candour. To put direct sexual experiences in verse, without doing injustice to the experience or the lyricism, was not just an achievement for Fahmida Riaz or Urdu literature, but for world literature.

Fahmida Riaz had married by then and moved to London for a few years. The currents of feminism that were blowing then must have reached her there. In 1972 she returned to Pakistan to begin a very different life in Karachi. Her poetry of that period had themes like desire, motherhood and marital love, forbidden topics like menstruation, social restrictions and cultural pressures. Her poems wove a complex web that sustained courage as well as delicacy.

Her poems ‘Aik Aurat ki Hansi‘ (‘A Woman’s Laugh’) and ‘Woh Ik Zan-e-Napak He‘ (‘She is an Impure Woman’) were a celebration of femininity similar to what we found later in the writings of French writers Julia Kristeva, Helene Cixous and Luce Irigaray. After all, Ismat Chughtai too had given full literary expression to womanhood many years before Simone de Beauvoir. Fahmida Riaz also wrote about ‘blood, milk and [menstrual] discharge’ years before these world-renowned French writers, whom later Western female writers made a basis for new ideology.

In Riaz’s poetry of that period, the political was presented as a part of the poet’s self and spirit. Given that 2018 marks the bicentennial of Karl Marx, her heartfelt tribute to Karl Marx will not be out of place and can be cited here. It concludes:

So much have you left behind!
Wherever the sun rose tearing the black earth
Men took your name, restless
Time never stopped for anyone as it is, but this too has happened
The flying century stopped for a brief moment to turn, look at you
A human generation has thought about you often
A century has raised its hand to salute you’
(Karl Marx)

In many poems, for example ‘Guriya‘ (‘Doll’) or ‘Muqaabla-e-Husn‘ (‘Beauty Contest’), she raised her voice against the drama which is performed with a woman in the name of love. She continued to tear the curtain off how a woman is forced to become dumb and lifeless like a doll to be desirable, because men have fixed this role for them.

Fahmida Riaz’s poetry of that period was also using tradition as symbolism, using the Bible or Quran. With these sources, she portrayed the centuries of oppression on women. In ‘Bakira‘ (‘Virgin’), the sheep or goat being sacrificed by the woman is her own existence. In her poem ‘Aqleema’, the eponymous sister of Abel and Cain insists on expressing her opinion.

A third poem, ‘Rajm‘ (‘Stoning’), is a stunningly evocative poem on the practice of stoning adulterers, inspired by a historical account of a couple being stoned to death: the man trying to shield his lover from the stones that would take both their lives.

In the mad heart does reside
A wild, dark desire
An ancient desire, ineffably sad
To be one with the blackness
For a moment
A moment.

There was an echo of religion in ‘Surah Yaseen’ and ‘Ae Vali-o-Rab Kaun-o-Makan‘ (‘O Lord and Master of the World and Universe’). A grief-stricken woman calls out to an unseen holy being and gets no response.

Religion also took a beautiful form in her words. My favourite poem is ‘Lao Hath Apna Lao Zara‘ (‘Bring, Just Bring Your Hand’), about a pregnant woman singing songs about the divine powers of creation together with her male companion. These symbols were more visibly distressed in the later poems.

Her battle with Pakistan’s military dictator is now a model fable. The punishment in a case against her was to be hanging or life imprisonment. At this time, she spent many years in political asylum in India. The poems she wrote there became a powerful and heartrending testimony of oppression.

Many in India fondly remember the poem ‘Naya Bharat‘ (‘New India’) where she first expressed her disillusionment at the Indian nuclear blasts of 1998, comparing the silliness of that decision to that of her own country’s:

You turned out just like us
The same silliness, the same obstinacy
Has finally reached your doorstep as well.
Now that the mad ghost of religion has begun to dance
You will do everything wrong
You will ask – Who is a true Hindu? Who is not?
Now go and start chanting
How great, how glorious was Bharat once!’

Less well-known is Riaz’s tribute to an icon of the Indian independence struggle, Bhagat Singh, in her poem ‘Bhagat Singh Ki Moorat‘ (‘Statue of Bhagat Singh’), which she also herself translated into English, and concludes:

Let his statue remain where it has been for 60 years
Accross both sides of the border
In a heart or two.
There every morning
Longings as innocent and ignorant as little children
Cover his young body with fresh garlands of marigold
Bathe his limbs with tears of love and adoration
He belongs there
He is happy there.’

In ‘Will You Not See the Full Moon?’ a feeling of narrative emerged which presented the life of ordinary people during the asphyxiating oppression of an era. There were the heat and dust of crowded paths, the harassed helter-skelter of the court, the concealed wrongdoings of the offices of the bureaucracy and the running fear and restlessness in the atmosphere; in this poem Fahmida Riaz emerged in the figure of a ‘peoples poet’ who sings the songs of hope in the great depths of people’s agony, pain and despair.

The writings of Fahmida Riaz were expressive of the abundance of genres and tones. Asif Farrukhi had termed this as the ‘classical refinement’ of her style (which was also evident in her initial poetry and also present in the poems of Badan Dareeda). She unfailingly searched for a voice that could express collectivity.

Also read: Fahmida Riaz, the Poet Who Lost Two Countries in One Lifetime

Her collection Dhoop (Sunlight) consisted of poems closer to Hindi. In the 1980s she also adopted the style of folk songs and folk tales. She never wrote the vapid prose poetry which dominated Urdu literature in the name of feminism in the decade of the 1990s. In its place she wrote proper and assured prose, both layered and eloquent.

Her three novels which relate to the travails of the subcontinent after independence began with Zinda Bahaar, a combination of travelogue and autobiography. Its second part was Godavari, which mixed anthropology, social history and fiction. The third was based on an analysis, told through several voices, of many years of bloodshed in Karachi. These three novels deserve to be recognised as classics of political engagement, original research and literary form.

In 2017, she released a well-received historical novel on the life and times of the fifth-century Persian Zoroastrian socialist revolutionary Mazdak, Qila-e-Faraamoshi (Fortress of Oblivion). A few discerning readers may read it as a thinly-veiled autobiography of her own struggles, ideals and dreams.

In the 1990s, Riaz remained more focused on prose, although the classical refinement of her initial period also returned in her poetry. Yet some poems betrayed the dark shadow of a feeling of defeat:

Riaz was not only the leader of the caravan of Pakistan’s female writers, but was also among the half-dozen most important writers to emerge in the last three decades. These paragraphs cannot do justice to her work. We will really remember her as she wrote herself, such a writer…

Who said whatever she wanted
Was never repentant lifelong

For Fahmida Riaz was our new Aqleema, one who unlike the heroine of her eponymous poem, talked back to the gods of authoritarianism, fundamentalism and patriarchy, for which she will be remembered forever.

Raza Naeem is a Pakistani social scientist, book critic and award-winning translator and dramatic reader currently based in Lahore. He has also translated the selected work of Fahmida Riaz into English. He can be reached at razanaeem@hotmail.com