Dublin to Srinagar, Gandhi Steps on Barbed Wire at 150

'Walk with Gandhi' glows with Gabriel Rosenstock’s haiku and Masood Hussain’s watercolour images. For the artist, now cut off from the world due to the Kashmir lockdown, the book is a piercing reminder of Gandhi’s continued relevance.

A series of posters were created around the images and haiku in 'Walk with Gandhi'. Credit: (c) 2019 Masood Hussain

In early April, well-known Srinagar-based artist, Masood Hussain, received a call from New York. His friend, Rafiq Kathwari, Kashmiri writer and poet, had an assignment for him. Gabriel Rosenstock, one of Ireland’s foremost bilingual poets, author/translator, children’s writer and haikuist, was working on a book of haiku on the life and ideas of Gandhi to mark his 150th birth anniversary, and Kathwari wanted Masood to make the illustrations for it. As the project coordinator he would be the link between Dublin, where the 70-year-old writer lived, and Srinagar.

While the project’s aim was to give young minds a glimpse of Gandhi’s universe and its continuing relevance so as to excite their curiosity, the idea was to create a bilingual book, in English and Irish (Gaeilic), that would appeal to adults as well.

It was an assignment rooted in friendship across continents, and Gandhi would have wholeheartedly approved, says 66-year-old Masood, who himself has sought the shelter of Gandhi’s ideas to engage with the present through various mediums over the years.

Setting his ongoing work aside, Masood worked at a furious pace for three months to meet the deadline. Sometimes he created images for the haiku sent to him by Kathwari and, at other times, Rosenstock composed haiku to go with the images forwarded to him.

As the creative process crackled between Srinagar, New York and Dublin, one inspired the other to tease out layers of references and associations across time and cultures. The artist says, “It did not matter that Gabriel and I have never met. Volunteering for this project felt like the most important thing I could do. I saw it as my small contribution to mark the 150th birth anniversary of Gandhi.’’

Masood chose to work with water-colour for a reason: “It is a transparent medium, without artifice – the perfect medium to create images of a man whose words and actions were transparent and direct.” Also, as a medium, a perfect companion for the poetic form of the haiku, with its stress on simplicity and directness. The result is a luminous work, Walk with Gandhi, with over 50 haikus and illustrations, and vignettes. Published by Gandhi 150 Ireland, it fittingly starts with the prayer, “May this book harm no one”. The jugalbandi of Rosenstock’s tightly compressed word-images and crisp text, and Masood’s visuals, has created a work that vibrates with energy – now playful, now questioning, now reflective. Visually, the flow of translucence from image to image is akin to an underground spring issuing forth as a clear stream, the words of the haiku like rounded pebbles visible under the unsullied surface. 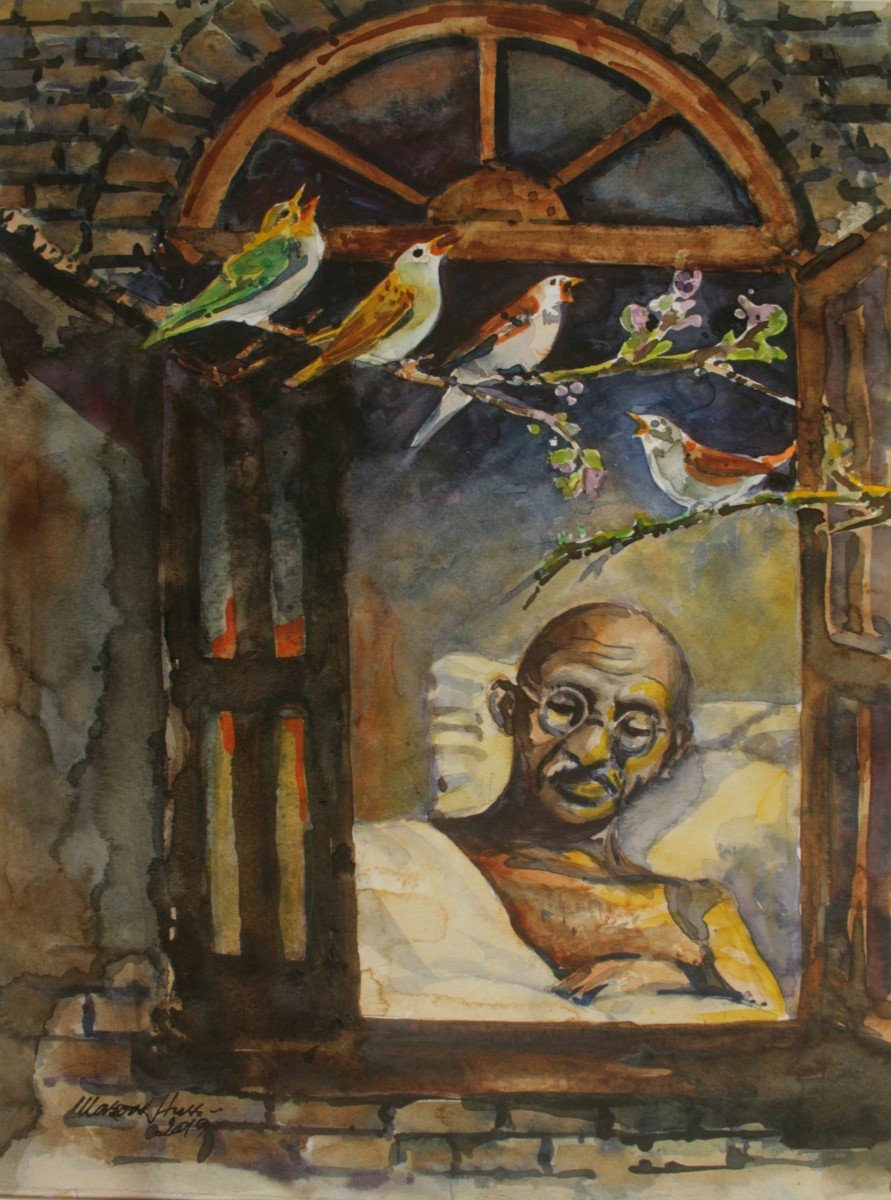 the fast begins…
louder and louder
the chirping of birds

The striking irony, as far as Masood is concerned, is that since August 5, 2019, when the government of India abrogated Kashmir’s special constitutional status and imposed an unprecedented lockdown on it, he has been cut off from the rest of the world. Due to the ongoing blockade of internet services, he has had no information about the various developments and activities on the book front as it reached its final stages.

The brief updates provided by friends after the restoration of landline services have only intensified his feeling of being left out of the circle of collective effort and cooperation that Walk with Gandhi has signified for him.

In such circumstances, it is to Gandhi that the artist turns. Masood says: “As I find myself marooned in Srinagar, I am reminded of what Gandhi said during his visit to Kashmir in the first week of August, 1947. He observed that the Kashmiris had ‘…one language, one culture and, so far as he could see, they were one people.’ He also remarked that he could not readily distinguish between a Kashmiri Hindu and Kashmiri Musalman.”

The artist adds, “Appreciating the people for maintaining communal amity at a time when the rest of the country was in the grip of communal frenzy, Gandhi ji said he saw ‘a ray of hope’ in Kashmir. It is my fervent hope that the words of the Mahatma are heard once again and peace returns to Kashmir soon. What else can I ask for in the 150th year of his birth anniversary.”

Also read: In Masood Hussain’s Art on Kashmir, an India of Leaden Skies and Silences

The idea of a shared way of life in Kashmir is something the artist has consistently worked with for close to three decades. It is not surprising, then, that for Rosenstock’s haiku echoing Gandhi’s statement that ‘God has no religion’, he visualised Gandhi’s remark about not being able to instantly make out a Kashmiri Muslim from a Kashmiri Hindu – showing two faceless couples, wearing similar attire. It is a fact that during Partition, Kashmir remained free of the communal bloodletting that marked other parts of India. There cannot be a better time or context for a conversation around Gandhi’s ideas of truth, ahimsa and civil disobedience than the present. We live in a world awash in violent conflict, intolerant of difference, and contemptuous of the idea of equity; a world riven by political, economic and environmental fault-lines. No wonder, there is unflagging interest in Gandhi and also a realisation that his ideas are needed now more than ever, even if it is not always accompanied by a clear reasoning of how to create a space for his ideas and practice in our times. 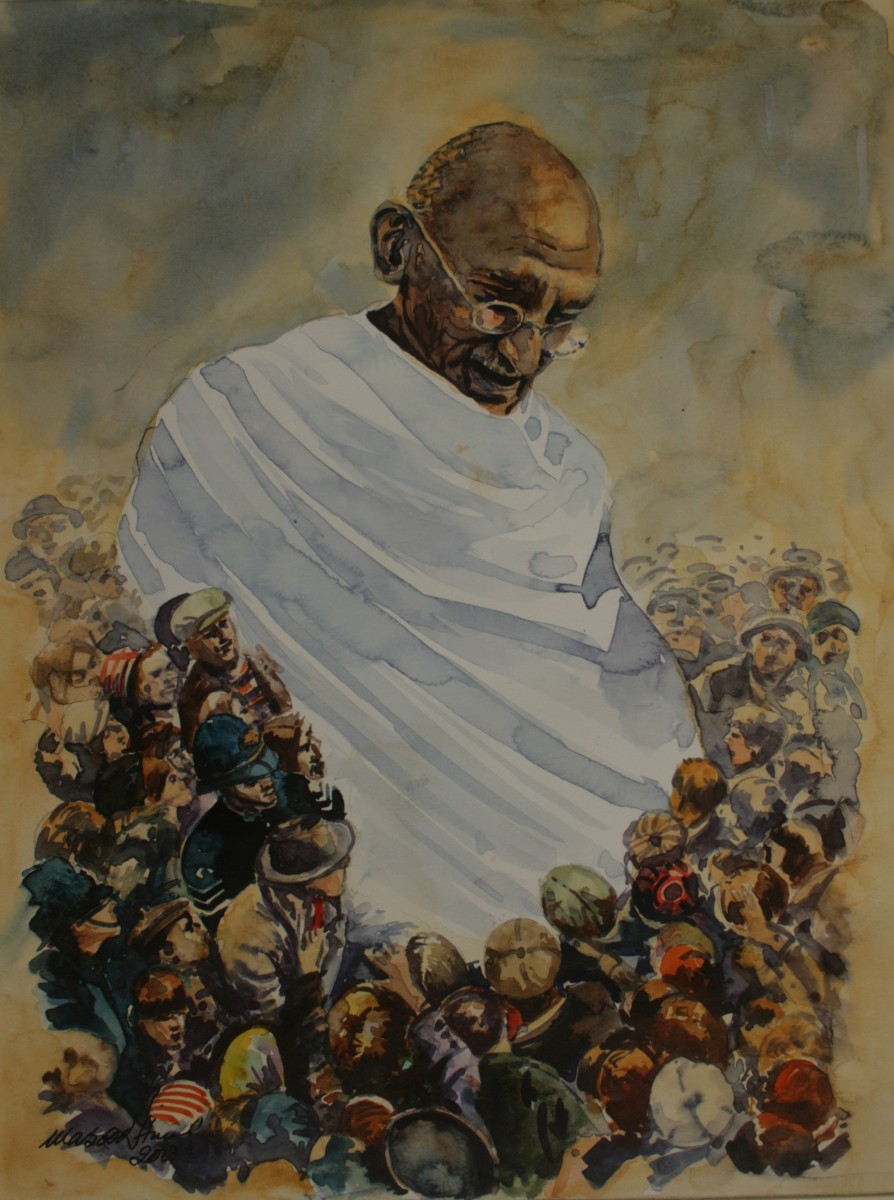 crowds gather
for a glimpse of you
who can see the soul?

To the layers of meaning embedded in a writer’s or artist’s work, the reader/viewer brings her own context as well. As an Indian believing in Gandhi’s idea of India, when one reflects on the iron fist in Kashmir, the human distress caused by the compiling of a National Register of Citizens in Assam, or the ugly face of majoritarianism and the state’s intolerance of dissent, Rosenstock and Masood’s work gains a new urgency.

Also read: From Gangappa to Gandhi

The image carried right on top, of Gandhi as a pheriwala, or hawker, pierces the heart. He is carrying on his head a straw basket full of white doves, in a grey landscape enveloped by the acrid smoke and haze of Partition violence. Gandhi’s forehead is furrowed and his expression sorrowful yet determined, as if he will do what he has to until his last breath. Pathos seeps out of the image. In the forefront is a doll clothed in blood-red, thrown to the ground. Clearly, there seem to be no takers for the idea of peace that Gandhi is ‘selling’ – then or now, notwithstanding grand gestures of obeisance to the frozen figure on the pedestal.

Elsewhere, a frame shows only half of Gandhi’s face. He is looking straight at the viewer. So magnetic is the gaze that it pulls you in, making you see one  irrefutable fact, namely that all occupation forces are the same. 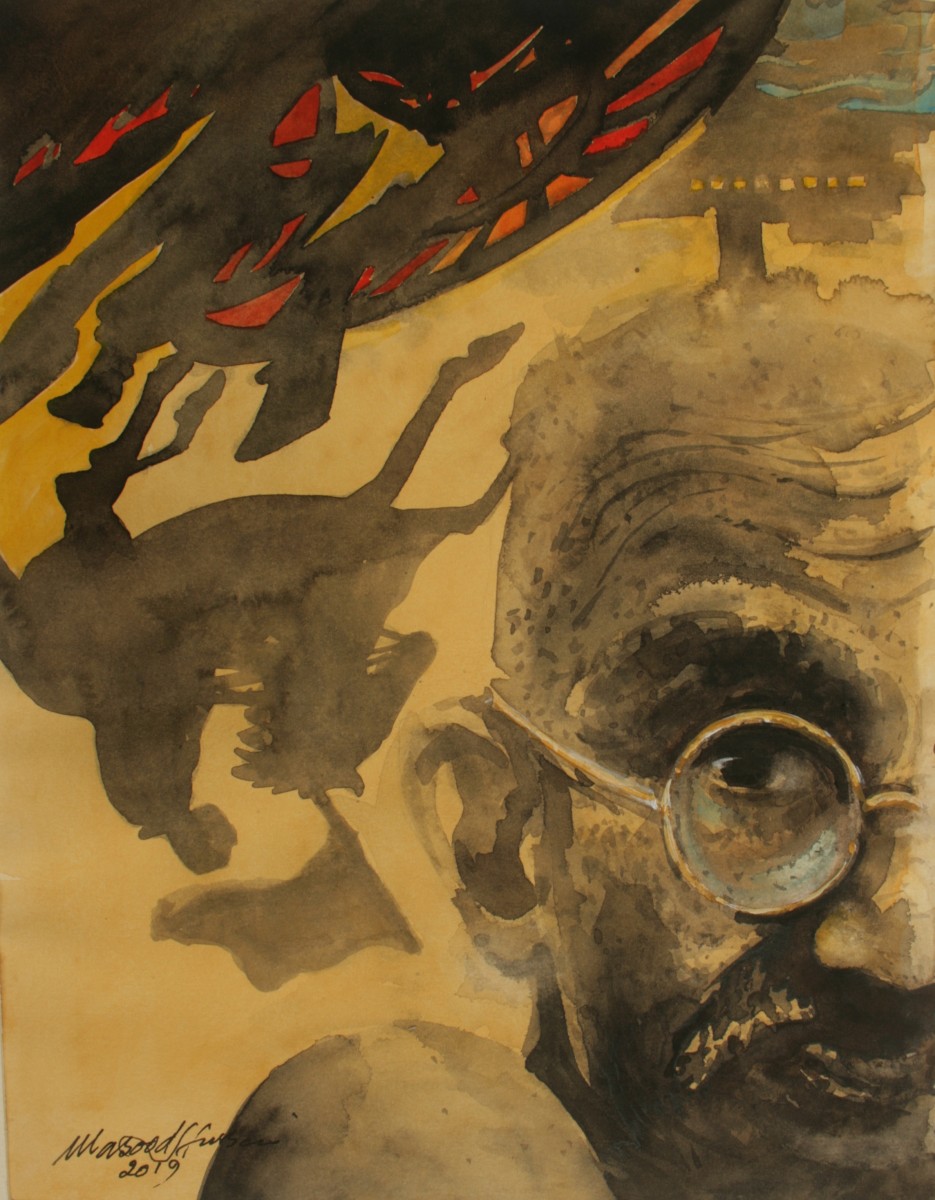 invading forces
always the same…
only the accents change.

In another frame, on a dark and wintry day in London, crows sitting on bare branches talk about the man who wears next to nothing: look, look!
a half-naked seditious fakir
has come to town.

That was the colonial government’s view of Gandhi, but the question that pops into one’s mind is: if he were alive in 2019, would he have been booked for sedition by his own government for critiquing it, no matter how non-violently?

Also read: The Man Who Captured Shades of Bapu’s Dream

One of the issues Rosenstock foregrounds for his young readers is of refugees – people rendered internally displaced or stateless, due to persecution, political conflict or environmental crises. In a poignant image, a forlorn Gandhi is surrounded by arms lifted in a triumphal gesture, painted black, the fingers sharpened to claws. Asks the haikuist:

cries of jubilation
who is there to remember?
…Partition

The image conceptualised by Masood (picture no. 3 right at the top) says it all. Under a sky lit up by ominous lightning bolts, the exodus of the displaced and dispossessed – humanity itself – takes place. The figures are small, insignificant to those who wield power. Towering above them is the figure of Gandhi, holding a vivid-red umbrella, with Rosenstock echoing Gandhi’s humane response:

let them in
weary women, men and children…
into our hearts.

Masood says the plight of people in Assam during the compilation of the National Register of Citizens was uppermost in his mind when he was creating this image. 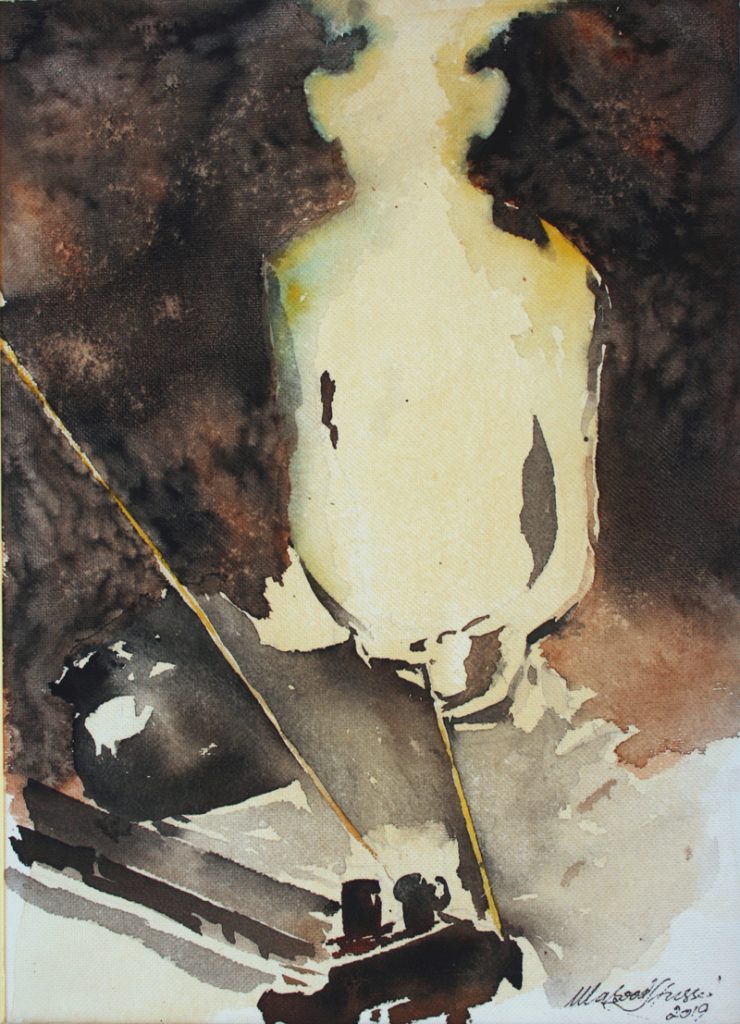 The image that stays in one’s mind is abstract – in the midst of an encroaching dark background, a flush of light with a faint outline of Gandhi:

our hearts
no longer hear it…
spinning wheel.

Chitra Padmanabhan is a freelance writer based in New Delhi. She has translated historian Sudhir Chandra’s ‘Gandhi: An Impossible Possibility’  (Routledge, 2017), from Hindi.