Discussing Narasimha Rao 'The Man' and 'The Times' of His Leadership

Vinay Sitapati’s biography of the former prime minister raises pertinent points about Rao's tenure as prime minister during the Babri Masjid demolition, the process of economic liberalisation and the advent of India's nuclear programme. 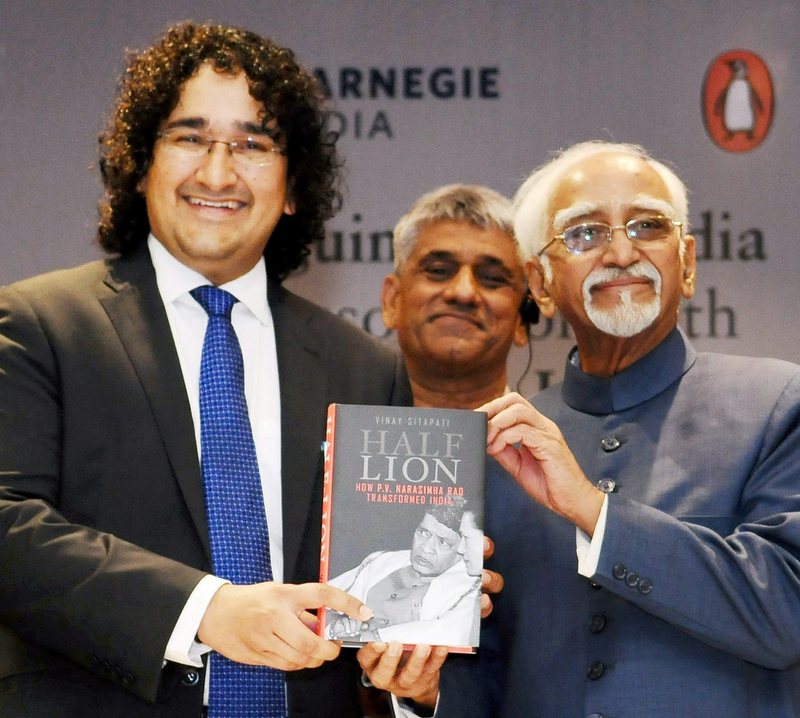 New Delhi: “Was it the man or the times?”

When it concerns former Prime Minister P.V. Narasimha Rao, there is no denying that both the man and the times were equally interesting.

Aside from the public curiosity Rao generated in 1998 with the publication of his autobiographical novel, The Insider – a good part of the curiosity was triggered by the explicit sexual escapades of a character, presumed to be Rao himself – many thought he was one of the most underrated Congress party members and a prime minister who never got his due.

The period for which he held office (1991-1996) was extraordinary. Besides successfully leading a minority government to the end of its term, Rao’s tenure witnessed the first flurries of the economic liberalisation that India so desperately needed to get going and set in motion the country’ nuclear programme. It also saw the demolition of the Babri Masjid by a right wing mob in Uttar Pradesh on a cold December morning – a scar on India’s secular face, which was to forever change the country’s politics.

It is no surprise then that when Vinay Sitapati, a young journalist, political scientist and author, put before four accomplished panellists the choice between Rao ‘the man’ and ‘the times’ he led in, important details about both emerged. Sitapati was joined by C. Rajamohan, strategic affairs expert and director of Carnegie India, veteran journalist Shekhar Gupta, Pratap Bhanu Mehta, president of Centre for Policy Research and Congress veteran Natwar Singh at the India International Centre to launch his biography on Rao, Half Lion: How P.V. Narasimha Rao Transformed India, in an event organised by Carnegie India and publisher Penguin Random House.

Prior to the discussion, Vice President Hamid Ansari, who launched Sitapati’s book, gave credit to Rao for grasping the opportunity and manoeuvring change. “Twenty five year ago, this week, P.V. Narasimha Rao was sworn in as the prime minister. The country and the world acknowledge the role he played as the initiator of change of economic reforms”. Ansari, however, called the demolition of the Babri masjid “an error of judgement” by Rao. “The then chairman of the Rajya Sabha described it (the demolition) as the greatest tragedy since the assassination of Mahatma Gandhi. Recently, President Pranab Mukherjee has called the demolition an act of absolute perfidy,” he said.

In 1991, three other politicians – Shankar Dayal Sharma, N.D. Tiwari and Arjun Singh – could have become prime minister. What if any of them took on the mantle?

Rajiv Gandhi’s widow Sonia Gandhi sent Natwar to fetch Sharma for the job. If Sharma agreed to take it up, would there have been a different India? Although Rao was the next best choice, Arjun was certainly hoping to be chosen instead.

A known adversary of Rao, Natwar has softened his stand on the former prime minister over the years. At the book launch and discussion, 88-year-old Natwar was candid in his response. “With due respect to both Tiwari and [Arjun] Singh, as prime minister, either of them would have been a spectacular failure”.

Gupta agreed. “Arjun Singh as the prime minister would have been the most wrong choice. When people say Rao was against the Gandhi family, I wonder what Arjun Singh would have done to them. He hated the Gandhi family in the garb of extreme devotion. From my interaction with him I can say that he felt it was the family that stood in his way,” he said.

Natwar went on to call Rao “a bad number two [referring to Rao’s tenure as Rajiv’s foreign minister] and a good number one”.

“As a PM, he blossomed, though Mahmohan Singh (Rao’s finance minister) gets all the credit. Rao was erudite, patient and adequately ambiguous. You could never ever catch him on the wrong foot.”

As an explanation, Natwar read out from an interview Rao gave to Gupta to underline the former Andhra strongman’s quirkiness. “Shekhar asked ‘How do you make a U-turn without taking a U-turn? That’s a special Narasimha Rao art’. Rao replied ‘If you understand where you are standing and are still in motion, turning becomes easier.’ Well, did you understand the answer? I didn’t. But Rao did. So did Shekhar”.

History has been unkind to Rao, according to Natwar. “There is not a single road or lane named after Rao in Delhi. We must write to the authorities requesting a road in his name in Delhi”.

Natwar was obviously referring to the cold shoulder the party president Sonia gave to Rao – he was the only former Congress prime minister whose body was not brought to the party headquarters in New Delhi for a last homage.

While Natwar gave the same reason he gave in his autobiography One Life is Not Enough for Rao’s fallout with Sonia (“I told him she is upset with you because you are not following up the Rajiv Gandhi assassination case, and you don’t go to see her.”) to the audience, comprising retired senior bureaucrats, politicians, journalists and also members of Rao’ family, Sitapati highlighted the party’s hurry to discard Rao after the Babri Masjid demolition in the fear of losing the Muslim vote.

“That Rao failed to act against the Babri Masjid attack, that he should have clamped President’s rule in UP in anticipation of the demolition [and] that he was secretly siding with the Hindu right wing forces were completely Congress created rumours. Yes, Rao did have secret meetings with Bharatiya Janata Party and Vishwa Hindu Parishad leaders on the issue but to say that he sided with them was a lie. People like Arjun Singh were trying to ensure that the Babri crisis cost Rao’s job. The Congress party spread the rumours to avoid losing the Muslim vote in Uttar Pradesh,” said Sitapati. After studying Rao’s private papers and interviewing important players of the time, Sitapati fervently defends Rao in Half Lion on the Babri count. In the book he writes:

“His error was that, against the judgement of his officials (and, it must be admitted, Arjun Singh), Rao reposed his faith in members of the VHP, BJP, RSS and sundry Hindu gurus. To be fair to Rao, he began these informal talks only when he realized he had few formal options…

In the final analysis, therefore, the enduring political victim of the Babri demolition was Narasimha Rao himself. Some of this was his doing, much of it deliberate defamation by his own party. As Narasimha Rao put it so presciently in his book on the events of 6 December, ‘…those responsible for the vandalism had got not only the Babri Masjid demolished, but along with the Babri Masjid it was me whom they were trying to demolish.’ ”

Expectedly, such a stand would not go down well with the Congress. Senior party man Mani Shankar Aiyar, present at the event, got up to try set the record straight.

“Action could have been taken. There was a precedence of President’s rule, the Rao government brought in Article 356 on the DMK Government in Tamil Nadu. When I was in Faizabad during my Ram Rahim yatra, I was arrested; Article 144 was clamped in that area. He could have pushed the State Government to clamp Article 144 far away from the disputed area so that so many kar sevaks could never gather there. While on my yatra, I was summoned by Rao to Delhi. He told me, ‘Mani, I have no problem with your yatra but I don’t agree with your form of secularism.’ On asking what he didn’t like about it, Rao said, ‘But this is a Hindu country.’ He could have taken action but he was busy trying to solve the so-called Hindu problem by discussing it with all kinds of sadhus and sants. In the Congress Parliamentary Party meeting after the demolition, he openly said kings in the old days used to consult saints and sages. But he forgot that the king decided what to be done in the state, not the saints and the sages.”

Naresh Chandra, the cabinet secretary during the Rao regime, was also present at the gathering and responded, “I would like to point out here that there was a difference between both the cases. In the TN case, Governor Surjeet Singh Barnala wrote to the PM suggesting President’s rule as there was enough evidence that police sided with LTTE militants. In the case of UP, the Governor didn’t make any such move. How can you then dismiss an elected government on mere assumption of law and order failure?”

Sitapati, who termed Rao “the greatest Indian prime minister after [Jawaharlal] Nehru,” asked the panellists who they thought was the greatest prime minister. While Rajmohan stayed away from giving a direct answer, Natwar was quick to say “P.V.”, referring to Rao. Mehta responded quickly, but said, “Atal Bihari Vajpayee,” with Gupta agreeing.

Despite his praise for the man, Sitapati blamed Rao for not acting during the anti-Sikh riots.

“1984 was Rao’s vilest hour. During the Babri demolition, police was with the UP Chief Minister but during the anti-Sikh riots, it was with him as he was the Union Home Minister. Even though someone very close to Rajiv Gandhi called Rao that the PMO was going to take all policing functions into its hands because violence against Sikhs was likely, he could have disobeyed the order and protected the Sikhs.  He would have lost his job but he would have been morally right,” he said.