When Dhyan Chand and India’s Olympians Refused to Salute Hitler

The Indian contingent was one of only two teams to not raise their arm as they marched past the Nazi dictator in the 1936 Berlin Olympics, a protest made sweeter by the hockey team beating Germany to win the gold medal.

The Berlin Olympics were declared open on August 1, 1936. M.N. Masood, a member of the team, left a minute-by-minute description of the opening ceremony that provides fascinating information. It was nothing less than a grand spectacle of Hitler’s ‘thousand-year Reich’. The Wehrmacht was fully mobilised in setting up the support infrastructure and the competitors were transported to the venue in army trucks. The Indians, with Dhyan Chand carrying the flag, were by far the most colourfully dressed of the contingents present. As Masood noted,

‘With our golden “kullahs” and light blue turbans, our contingent appeared as members of a marriage procession of some rich Hindu gentleman, rather than competitors in the Olympic Games.’

But this was no ordinary ‘marriage procession’ – the members of the Indian team were about to make a huge political statement by becoming one of the only two contingents who refused to salute Adolf Hitler.

The opening ceremony of the Berlin Olympics was one of the great set-pieces of the Nazi era. As the giant zeppelin, the Hindenberg, circled majestically over the stadium, Hitler and his minister of interior arrived amid great fanfare to observe a military guard of honour.

M.N. Masood noted the fervour that the Führer generated:

‘When the Führer neared the Stadium, a multitude of young boys who were watching the proceedings from outside, saw their idol approaching towards them. With one great cry, they shouted ‘Heil, Hitler!’ and broke the silence of the Maifield.’

In four years, that war cry would reverberate around the world but the panzer blitzkriegs and the horrors of the holocaust were still in the future. At the time, at least some Indians were impressed by this disciplined spectacle of the resurgent Third Reich. 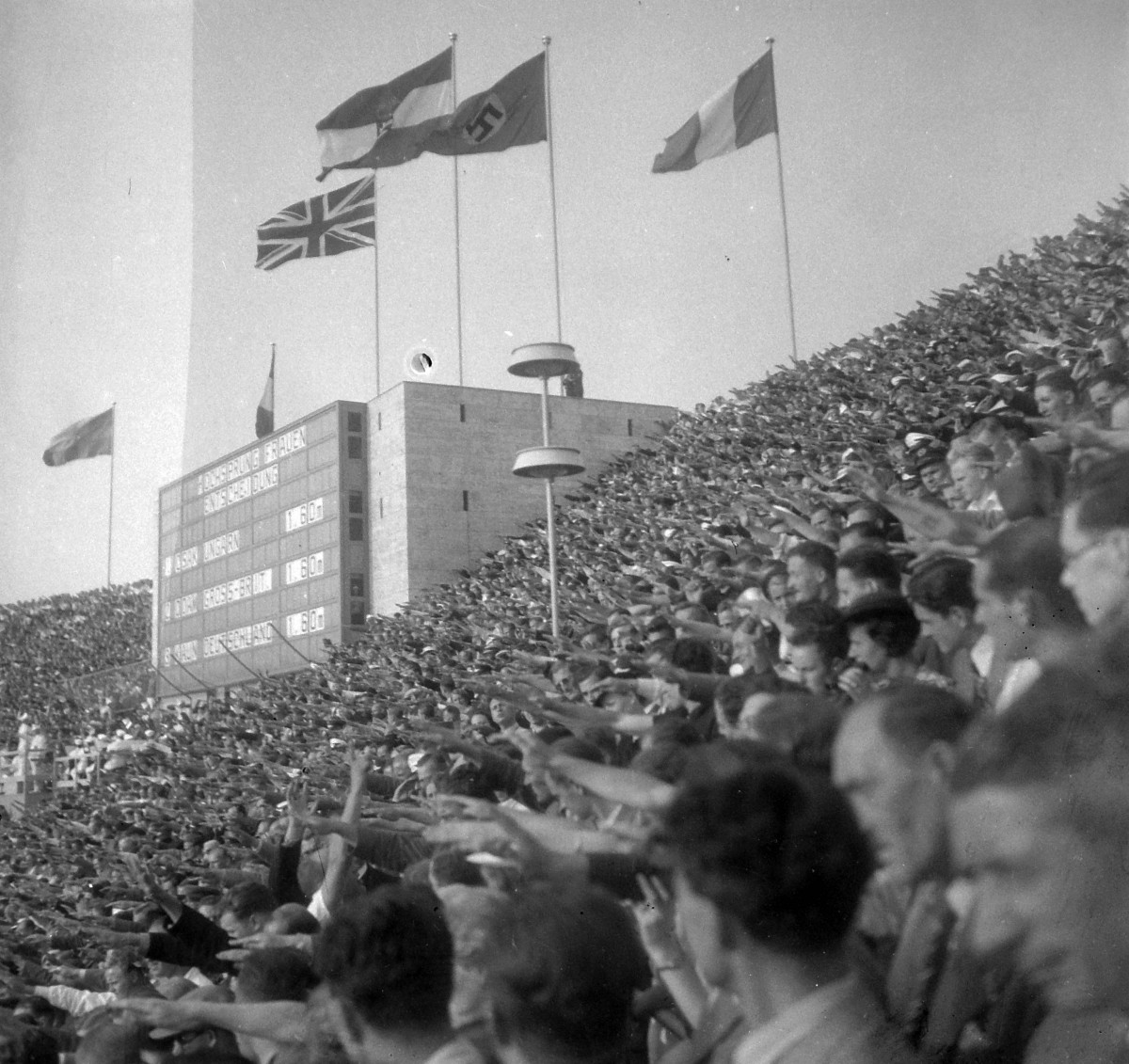 Spectators giving the Nazi salute during one of the medal ceremonies. Photo: Wikimedia Commons, CC-BY-SA 3.0

As ‘the hundred thousand Germans in the Stadium stood to their feet and sang with one voice’ the two German national hymns – ‘Deutschland’ and ‘Horst Wessel-Lied’ – Masood writes that it ‘made a strange impression’ upon the Indian contingent and ‘not an eye was left dry’:

‘India rose before our imagination … somehow the spring of our national feelings was touched, and the unity and solidarity of the people in the Stadium made us look with shame and regret at our poverty, destitution and discord.’

Also read: Why These Indians Fought for Spanish Democracy

But nationalist aspirations were not the same as sympathising with the Nazi cause. What Masood does not mention in his elaborate description is the serious controversy the Indians created at the opening ceremony by not saluting Hitler during the march past. The Indians were the only contingent apart from the Americans to not perform the raised-arm salute as a mark of respect for the German chancellor. 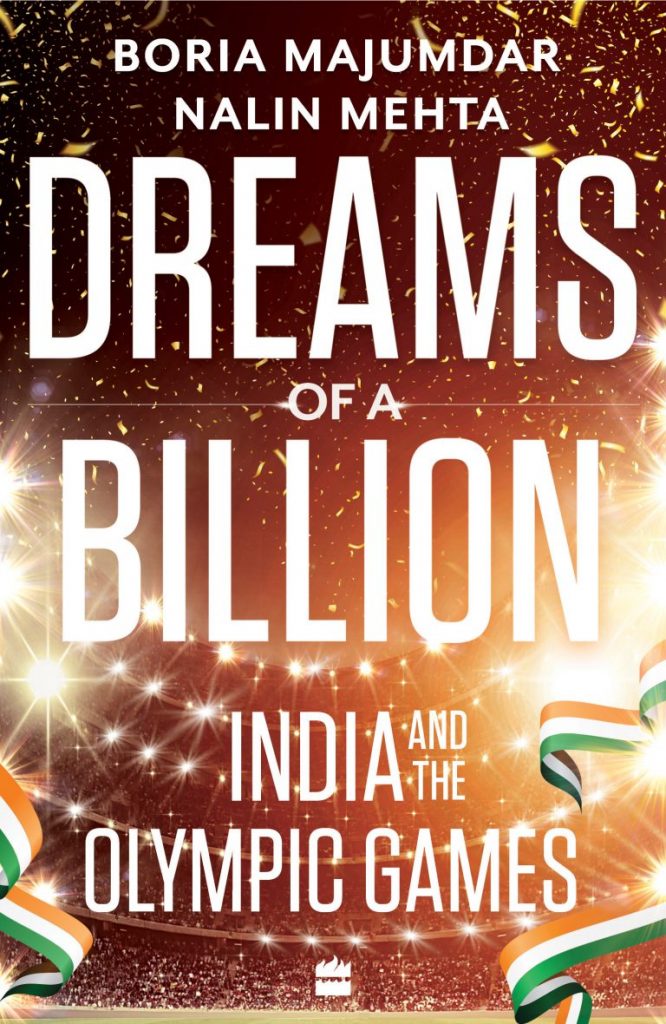 Boria Majumdar and Nalin Mehta
Dreams of a Billion: India and the Olympic Games
Harper Collins, 2020

British-loyalist newspapers like The Statesman were more focused on the defiant US contingent, making only a brief mention of what the Indians did. This was partly because of the dark cloud that hung over the participation of the US and the threat of a boycott by some of their athletes, with Jewish athletes Milton Green and Norman Canners staying true to their word. The high-profile American contingent, uncertain as to whether its participation might be interpreted as support for the Nazi regime and its anti-Semitic policies, had barely made it to Berlin after a narrowly won vote orchestrated by sports administrator and future IOC President Avery Brundage. But their contingent refused to dip its flag or ‘doff its headgear’ when passing the podium, eliciting ‘a certain amount of whistling from a section of the crowd’. The Berlin Games are remembered mostly for the exploits of the African-American athlete Jesse Owens, whose triumph disproved Nazi theories of Aryan dominance. For most journalists, the Americans were the story of the Games.

Yet, the Indian decision not to salute Hitler was a grand gesture of defiance, totally in sync with the tenets of the dominant stream of Indian nationalism and the Congress Party. This was perhaps why loyalist newspapers in India chose not to play it up. The Calcutta Statesman chose to place its coverage of the Indian defiance on its political pages as opposed to the sports pages where all Olympic news was usually placed.

It is important to note that G.D. Sondhi, one of the officials accompanying the Indian contingent, was deeply influenced by Nehruvian ideas. In the late 1940s, inspired by Nehru’s internationalist ideals and the dream of pan-Asian unity, he single-handedly evolved and created the framework of the Asian Games. At a time when Britain was courting Hitler with its policy of appeasement – just two years after which the prime minister, Neville Chamberlain, was to triumphantly declare ‘peace for our times’ after the Munich conference – the Indian decision not to salute the Führer, it seems, stemmed ideologically from the anti-Nazi position taken by the Congress under Gandhi and Nehru. From the 1920s, the Congress had repeatedly opposed Britain in the event of a European war and regarded fascism and Nazism as forms of Western imperialism.

In 1936, the same year as the Indians were marching in Berlin, Nehru told the Lucknow session of the Congress that ‘Capitalism in its difficulties took to Fascism’ and ‘fascism and imperialism … stood out as the two faces of the now decaying capitalism’. It was as impossible for India to support Britain’s new opponents as it was to support Britain. From 1938 onwards, Gandhi began opposing Hitler in the pages of Harijan, at one point even sending him a letter to desist from violence. In 1939, the Congress resolved to ‘keep aloof from both imperialism and fascism’ in its session in Tripuri.

There is no evidence to show any direct linkage between the Congress and the athletes’ decision to not salute Hitler in Berlin. But the fact remains that it was a political act, breath-taking in its audacity and in direct opposition to most other contingents at the Games, including the British. Managers like Sondhi were in all likelihood influenced by nationalist sentiment as articulated by the Congress leadership. The ‘marriage procession’ carried an underlying political message…

Against all expectations of a resurgent German team, Dhyan Chand and his team crushed Germany 8–1 to win their third consecutive Olympic gold. Forced to swallow their dire predictions, the sportswriters once again wrote flowery paeans and the title defence was narrated in great detail. Triumphant subheadings in The Statesman summed up the mood of the match report: ‘India’s Triumph’, ‘Science Scores Over Force’, and ‘Dhyan Chand in Form’.

This report left little doubt about India’s overwhelming supremacy: ‘In the second half science triumphed over force and the skill of Indian forwards, assisted by a hardworking trio of halves brought goal after goal. The vast crowd rose as one man as the Indians made raid after raid, completely outwitting the home defence with their speed and stickwork and their uncanny accuracy of shooting.

Goal after goal was scored to the bewilderment of the German side and though they played with their greatest pluck and gameness and managed to score once, they were a well-beaten team.’ It was in this game that Dhyan Chand truly came into his own in the Berlin Olympics. 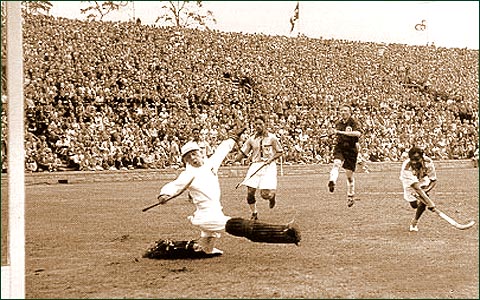 Dhyan Chand had discarded his stockings and spiked shoes and wore rubber sole shoes, which increased his speed a great deal. That he was at his best is borne out by the handsome scoreline of 8–1. Dhyan Chand himself scored six goals. The German papers, which until then had been predicting a German gold, were full of praise for the Indians after the final. A correspondent for the Morning Post argued that Berlin would remember the Indian hockey team for long. ‘These players, it is said, glided over turf as if it is a skating rink and their flickering sticks had the Japanese, normally so agile, mesmerised.’ The reporter went on to conclude, ‘Nature seems to have endowed Indians with a special aptitude for hockey’. The legend of Indian hockey and the Games’ special affinity with what was still seen as the ‘Orient’ was embellished further.

It is a tenet of Indian sporting folklore that Hitler personally met Dhyan Chand and offered him an officer’s commission in the Wehrmacht if he would play for Germany. This story is almost certainly apocryphal because none of the contemporary sources mention this incident and neither does Dhyan Chand in his autobiography…

The 1936 Olympic campaign finally put to rest any doubts regarding India’s hockey supremacy. India had won all its matches in style, scoring thirty-eight goals in the process and conceding only one. Dhyan Chand, once discriminated against for his inferior social status, had consolidated his position as the darling of the Western world. A statue of his was erected in Vienna. Another statue erected later in Delhi’s Dhyan Chand National Stadium remains the only sculpture dedicated to a hockey player in independent India.

His six goals against the Germans in the final were no less an achievement than Jesse Owen’s four gold medals in track and field. As Gulu Ezekiel wrote, ‘While on the track Jesse Owens exploded the many myths of Aryan superiority, which the Nazi forces had carefully propounded, on the hockey field Dhyan Chand created magic.’ It was not without reason that the government of India issued a postage stamp in his honour and conferred on him one of India’s highest civilian distinctions, the Padma Bhushan, in 1956.

This is an extract from Boria Majumdar and Nalin Mehta’s book Dreams of a Billion: India and the Olympic Games (Harper Collins, 2020).