Book Review: Throwing Light on the Lives and Times of Sir Edwin Arnold

Jairam Ramesh's recent 'The Light of Asia: The Poem that Defined The Buddha' takes on a subject of limited scope to construct a highly readable kaleidoscope of Arnold and his work.

One thing is not in doubt. Jairam Ramesh is the quintessential, scholarly researcher. He can pick up relatively off-stream subjects, like his tomes on P.N. Haksar and Krishna Menon, and delve deep into the subject like an academic beaver who will not rest content until all the dimensions of the subject are fully retrieved.

But one still wonders whether Sir Edwin Arnold’s The Light of Asia is deserving of 457 pages in print. Arnold’s book is an important one, but is not considered by most critics to be a classic and his own place in literature is uncertain. It is true that Arnold was a genuine Indophile, and wrote several seminal works on Indian philosophy and literature, including The Song Celestial on the Bhagavad Gita.  But, it is important to remember that he was a colonialist by conviction and, as Ramesh himself says, ‘a firm believer in the civilising mission of the British’ for the good of the natives. 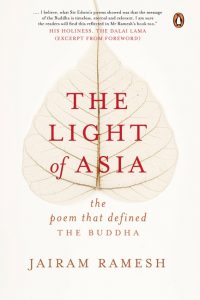 The Light of Asia
Jairam Ramesh
Penguin, May 2021

This being said, Ramesh had done a masterly work in piecing together and analysing the many facets of The Light of Asia, the life of Arnold, and the impact the book had — significantly or tangentially — on many pivotal figures in our own history, from Swami Vivekananda, Mahatma Gandhi, Jawaharlal Nehru, B.R. Ambedkar, Rabindranath Tagore, and the physics Nobel Laureate, C.V. Raman. For the rest, we are presented meticulously researched details on the translations of the book, the films that it inspired, the art exhibitions it prompted, and the most obscure details of the life of Arnold, including how his birth centenary was celebrated and what his children and grandchildren did and did not do.

There was one important matter in which Arnold played an important role. It related to who would run the Bodh Gaya temple: a Hindu sect that had been in control of the temple since the seventeenth century, or the Buddhists. Arnold visited Bodh Gaya in 1886, and lent his full support to the control over this site passing on to the Buddhists, whose claim was spearheaded by the Sri Lanka monk, Anagarika Dharmapala, the founder of the Mahabodhi Society. It was a long and bitter battle, but was fortunately peacefully settled in 1953 when Buddhist control over the temple was established.

While Arnold’s interest in India’s philosophical, spiritual and literary heritage was undoubted, and his translations of several Persian, Arabic and Sanskrit classics is testimony to this, it is interesting that his actual sojourn in India was quite limited.  He lived continuously here only between late 1857 and mid 1860, as the first Principal of what would be known later as the Deccan College in Poona. He again returned to India in 1885 but only for some three months. By contrast, perhaps, his involvement in Africa, where he had a key role in the first Congo expedition and had a mountain and a river named after him, and in Japan, which occupied his attention almost continuously from 1890 (his third wife was Japanese), was more.

Ramesh admits that Arnold has attracted only one serious biographer, and that too as far back as 1957. In that sense, certainly, our intrepid researcher has fulfilled a gap which, obviously, was not very evident to the country to which Arnold belonged —Britain.

As a biography, Ramesh’s book rates very highly. As an account of the times in which Arnold lived, and of his interactions with eminent people who were his contemporaries, it also scores very highly. Ramesh has left no stone unturned to dig deep into archival material — and in particular letters and reports — to construct a highly readable kaleidoscope of the man, his book, and the times. While one may cavil about whether so much time and effort ought to have been spent on a subject of limited scope, there can be little doubt that at the end of it all, the final product is a very readable one, and veritably, a labour of love.

Pavan K. Varma is a former diplomat and was a member of the Rajya Sabha between 2014 and 2016.