'Thinking with Ghalib': A Book For a Time When Multi-Religious Thought Is Under Attack

The book calls out to young South Asians – whose 'multi-cultural, multi-religious civilization' is under attack – to recover lost ground with the legendary poet.

There exists a trend of writing books introducing famous literary personages for children.

In Urdu, among books of this ilk, we have Bachchon ke Ghalib (Ghalib for children) or Bachchon ke Iqbal (Iqbal for children) or any of the other renowned modern personalities whose lives and works are rendered in simple anecdotal prose and paraphrased for young readers. Although a “minor” genre of writing, the genre of instructive biographies “for children” follows the trend of 19th century colonial education that believed in instructing the youth by example rather than application.

Altaf Husain Hali, another favourite subject for the “for children” series of books, and one of the earliest writers of modern critical prose in Urdu, associated with the Aligarh movement for the education of the elite among the Muslims of India, invented the genre of the biography of exemplary individuals, albeit written for mature readers and not for children. One of the subjects of Hali’s biographies was Mirza Ghalib.

Today, the poet’s name represents the last gasp of classical Urdu and Persian poetry in the subcontinent, or somewhat contradictorily, the birth of a modern consciousness in Urdu literature. Whichever Ghalib we subscribe to, the poet’s name alone conveys the figure of a venerable, imitable, exemplary teacher and guide for readers and connoisseurs of Urdu poetry worldwide.

As the genre of biographies for children suggests, there can be many Ghalibs or Halis or Iqbals. But the ones for children are written by adults seeking to instruct them through exemplary lives and works of the great writer. Anjum Altaf and Amit Basole’s recently published an anthology Thinking with Ghalib: Poetry for a New Generation (Lahore, Folio Books and is forthcoming from Roli Books, India), which tries to recast the genre of exemplary books for the 21st century. The “new generation” of their title refers to “young South Asians” whose “multi-cultural, multi-religious civilization” is under attack, the editors contend. They have chosen Ghalib to turn this tide because he represents that civilisation and its pluralistic values. 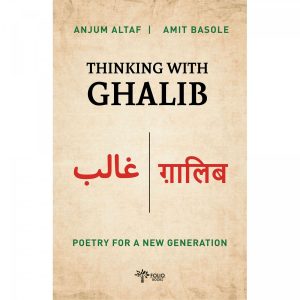 ‘Thinking with Ghalib: Poetry for a New Generation’ by Anjum Altaf and Amit Basole. (Lahore, Folio Books and is forthcoming from Roli Books, India)

The focus in Thinking with Ghalib is on Ghalib’s verse than his life.

The book consists of 30 couplets selected from the poet’s Urdu divan, thereby choosing not to engage with entire ghazals. Thus, it is a selection from a selection of ghazals which Ghalib himself made from a vast number of his Urdu ghazals which we today know as his definitive divan. Each couplet is treated as a chapter-like entry, consisting of the original text, rendered in Urdu, Hindi and Roman scripts and a working literal translation into English. This is followed by the editors’ commentary on the selected verse.

The authors proceed in each chapter, which is titled after the lesson-theme they want readers to draw, by discussing the meaning of the verse after which they pick a theme of contemporary relevance that advances on the poem’s meaning. The themes variously include dogmatism, rationalism, tolerance, self-awareness, self-criticism, belief, doubt and freethinking. The commentaries often digress towards references to current politics in India and Pakistan, and in the world at large, especially various instances of political violence and social intolerance.

These digressions appear to say something about the poetic lines that are their point of departure. But poetry is not enough to think about the complexities of geopolitics. Not even Ghalib’s poetry. And yet to think “with” Ghalib is the wager of the editors. Unlike their 19th and 20th century predecessors, Anjum Altaf and Amit Basole invite us to leave the poet and his verses behind, for a while, and consider the world in which we read poetry such as Ghalib’s. The effect can be both jarring and suggestive. As would be obvious by now, the book is not written for the purist.

Also read: 150 Years of Mirza Ghalib: How His Genius Took the Ghazal to New Heights and Depths

At least since Hali’s time, Urdu critics have been at pains to give a social content to the love-poetry format of the Urdu ghazal. For a book that calls out to young South Asians to recover the lost ground of their civilisation, could it be that this lost ground is really the inability to read and write love poetry with little or no connection to the world outside? Is it not easier to speak of politics and morality to the youth than of something seemingly anti-political and emotional as love? What would a book of “love poetry for South Asian youth” look like today?

This could be one answer to the question with which the authors close the book: “Is there anything more we can learn from Ghalib that would help us through these divisive times?”