Book Review: Syria Caught in the Vortex of Regional and Global Competitions

Former ambassador to Syria Rajendra Abhyankar's 'Syria: The Tragedy of a Pivotal State' goes well beyond the author’s diplomatic experience, and encompasses several later visits to Syria during the decade-old confrontations. The civil conflict in Syria has now entered its tenth year. It has already taken the lives of about half a million people and displaced over 11 million, about half of whom are refugees in neighbouring countries, eking out a miserable existence in squalid tent cities and dependent on the charity of international donors. The greater tragedy is that there is no prospect even now of the end of the conflict, nor is there any credible peace process underway from any source. The misery of the Syrian people is not likely to end any time soon.

It is bewildering that a small state at the edge of West Asia should generate so much violence and such intense competitions among such a large number of players – domestic and external – and yet obtain such limited attention from international media. India’s premier scholar-diplomat, Rajendra Abhyankar, former ambassador to Syria and secretary in the foreign office dealing with West Asia and North Africa, has, in his book Syria: The Tragedy of a Pivotal State, provided a remarkably comprehensive and lucid account of Syrian history and politics and explained the wellsprings and course of the ongoing contentions. 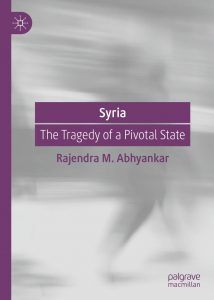 The present state of Syria was shaped in 1924 and was part of the French “mandate”. Syria is a mosaic of diverse faiths, sects and ethnicities; it is home to Sunni and Shia Muslims, the Alawi and Druze communities, different Christian denominations, and ethnic groups such as the Kurd, Turkoman and Armenian.

For the last 50 years, it has been ruled by the father-son duo, Hafez al Assad (1970-2000) and his son, Basher al Assad, who belong to the Shia Alawite sect, but have maintained a secular order under the umbrella of the Ba’ath Party, whose ideology is an amalgam of Arab nationalism and socialism. They have maintained an authoritarian order supported by co-opting different sections of the population. Abhyankar describes Syria as a “pluralistic state” and points out that Basher al Assad enjoys “support from key elements of Syrian society”.

Syria’s political culture, the author says, is founded on deep hostility to the West, a desire to maintain national homogeneity on the basis of fervent appeals to nationalism, and the continuous nurturing of a sense of crisis, literally a “state of emergency” that was enforced in the country from 1963 to 2011. This order has little room for dissent: in 1982, Hafez al Assad destroyed Hama and killed several thousand people in his attempt to annihilate the threat from the Muslim Brotherhood.

Abhyankar offers an interesting take on the sources of present-day popular discontent: eco-sectarianism. This phenomenon, he says, “explains the relationship between sectarian violence and environmental pressures in fragmented and unequal societies with a weak sense of national consciousness and languishing nation-building projects”.

He points out that Syria had for several years been making profligate use of its water resources: its massive irrigation projects depleted its ground water. Hence, the drought of 2006-10 led to a humanitarian disaster, forcing thousands of farmers, most of them Sunni, to migrate to towns as “environmental refugees”.

What caused resentment was the poor handling of the crisis, that engendered a sense of victimhood among the poorer Sunnis. The author notes: “It is clear that bad environmental conditions and non-existent management by the Syrian government had a negative effect on communal harmony.” From this cauldron of deep resentment the present conflict was born.

In March 2011, as the Arab Spring uprisings spread across North Africa and West Asia, some teenage boys inscribed anti-Assad graffiti on the walls of a high school in Dara’a. They were held in police custody and tortured for several weeks. This ignited popular outrage that spread across several other Syrian towns.

Left to his own devices, Assad could perhaps have handled this crisis successfully; but he just did not have that opportunity. Neighbouring countries – Turkey, Qatar and Saudi Arabia – entered the fray to overthrow Assad and place a Sunni leader in Damascus. They backed a variety of Islamist militant groups – at one time their number exceeded 1,500 – with weapons and logistical and financial support.

The Syrian conflict emerged from such innocuous origins, but the country today is the theatre for several players to pursue their interests in this brutal quagmire.

Players in the conflict

Abhyankar anchors the contemporary Syrian story in its status as a “pivotal state” – a state that must necessarily be dominated by an external power if the latter seeks to control the region. Syria’s location at the edge of Asia and as the “bridge” to Africa gives it a special geo-strategic importance. Control over Syria, the author points out, “gives the ability to secure political advantage through control over the flow of goods, people and activities between several (sub) continents”.

Specifically, in the context of West Asian competitions, Syria shares borders with five countries. It is thus deeply embedded in the Israel-Palestine issue as also the aspirations of the Kurds for their independent homeland and the attendant cross-border contentions with Iran, Iraq and Turkey where their people reside. The diverse mosaic of sect and ethnicity that makes up Syria’s population also makes it a part of the deep sectarian divide between Saudi Arabia and Iran and the reverberations of this confrontation in Lebanon, Yemen and Iraq.

Syria’s “pivotal” character has brought in extra-regional players as well – Russia and the US – whose competition at the global platform to maintain or overturn the existing world order (the US and Russia, respectively) has made it a battleground in their larger struggle.

Syria’s civil conflict and the breakdown of state order have also provided congenial space for extremist elements to expand their influence and territorial domain. The Islamic State of Iraq (ISI) sent a detachment into war-torn Syria in early 2012, which became the best rebel fighting force in the country by the end of the year.

The Syrian branch proclaimed its affiliation with Al Qaeda, while the Islamic State of Iraq and Syria (ISIS), that emerged in 2013, blurred the Syria-Iraq border and made itself a transnational proto-state the size of the United Kingdom, with a population of nearly nine million, a standing army of 100,000 militants, and monthly income of several million dollars.

The regime-change project and the war on the ISIS coalesced in Syria. The US led the multi-national coalition against ISIS; it also backed the Syrian Kurds who were hoping to shape their “Rojava” (‘western homeland’) across the Syria-Turkish border. The US built up the Kurds as a cohesive fighting force, the Syrian Democratic Forces, who decimated the ISIS caliphate in Syria in December 2018 and then killed its leader, Abu Bakr al Baghdadi, in Syria in October 2019.

The Assad regime has from the outset enjoyed the support of its long-standing strategic partner, Iran, which has mobilised personnel, weapons and finance on its behalf, despite the crushing sanctions it is experiencing at home.

Russia entered the conflict in support of Assad for strategic and political reasons: it is totally opposed to externally-sponsored regime change and also wishes to retain its military bases in Syria at the Mediterranean coast as part of its broader interest in maintaining a presence in and having a say on major global contentions. The support of Russia and Iran has ensured that the tide of battle has turned and Assad now controls most of Syria and the issue of his removal is no longer on the agenda.

The territorial successes of the Kurds along the border pose an “existential” threat for Turkey. In a major reversal, it has abandoned the Islamist alliance and the regime-change project and joined Russia and Iran in the Astana peace process. This has achieved a ceasefire on most fronts. The exception is the northern Idlib region, where Turkey is seeking to get the Islamist fighters on to its side and use them to back its confrontation with the Kurds in the northeast. Idlib, with a three-million population and about 50,000 militants, remains a flashpoint as Syria and Russia are mobilised for an assault to liberate this last rebel-held bastion.

Also read: The Winter of No WiFi – ‘Brothers of the Gun: A Memoir of the Syrian War’

The US position has seen several twists and turns and remains confusing. After the defeat of ISIS, Trump was anxious to get his soldiers back home. He was willing to sacrifice his Kurdish allies by inviting Turkish troops into the northeast and thinning out US presence. On the other hand, his officials wanted to maintain a US military presence for strategic reasons – to confront Russia and Iran. The arrangement struck between Trump and his officials is that just about 500 soldiers will remain to guard the oil fields, a situation that is viewed as unsatisfactory by all parties.

The other change taking place is that of the Gulf Arab nations: initially hostile to Assad and committed to regime-change, they are now attempting to re-build ties with the regime to challenge Iran as the sole arbiter in Syrian affairs.

After ten years, the Syrian conflict has reached endgame. But, though the fighting has abated, numerous unresolved issues remain: the fate of Idlib and the future of Kurdish aspirations. Again, Turkey’s wish to maintain a long-term presence in north Syria conflicts with the interest of Assad, Iran and Russia to achieve a unified and sovereign Syria. And, then, there are the urgent matters relating to reconstruction and the return of displaced persons: reconstruction will cost several hundred billion dollars at a time when geopolitical competitions remain unresolved. Above all, there is the contentious matter of working on a political process that will decide the future shape of the Syrian political order – framing a new constitution that provides for its territorial integrity, the accommodation of its diverse communities, and democratic and federal institutions – all of this in a landscape that has only seen authoritarian rule for fifty years and destructive conflict over the last ten.

Given his rich diplomatic experience, Abhyankar offers a number of approaches that would take the political process forward. This would require the active involvement of the UN and the support of the diverse nations that have so far been encouraging conflict in this “pivotal” state to subserve their interests. There is so far no evidence of their interest in peace; competitions in Syria will continue and could occasionally become lethal.

The narrative of the book goes well beyond the author’s diplomatic experience, and encompasses several later visits to Syria during the decade-old confrontations and interviews with Syrian refugees in neighbouring countries. These personal engagements are supported by substantial academic research. This has made the book a major contribution to the international discourse relating to Syria and West Asian affairs in general and a valuable reference source for years to come.