Sudeep Chakravarti’s 'The Eastern Gate', his second on India’s fragile northeast, moves with a solution-centric approach towards one of India’s oldest insurgencies. 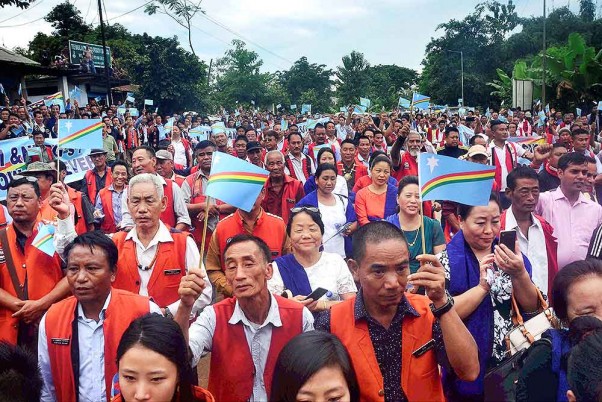 Can the National Socialist Council of Nagaland (Isak-Muivah), better known as NSCN (I-M), the largest Naga rebel group maintaining a ceasefire with the government since 1997, agree to a solution to the problem of Naga ‘sovereignty’ that addresses only the people living in Nagaland?

Possibly not, because their government – the parallel government that collects ‘taxes’, maintains its army and celebrates Independence Day every August 14 – is named Government of the People’s Republic of Nagalim. Here, ‘Nagalim’ refers to the entire Naga ancestral homeland spread across Nagaland, the Manipur hills and parts of Assam and Arunachal Pradesh, apart from adjoining districts in Myanmar.

Leaving Myanmar aside, can the I-M agree to a deal that does not address their demands on the Naga home in the hills of Manipur, where in the Ukhrul district lives the second-largest Naga tribe – the Tangkhul Naga – to which not only Thuingaleng Muivah but also a large number of the I-M’s top operatives belong? Most likely not, as author Sudeep Chakravarti shows in his latest book, The Eastern Gate: War and Peace in Nagaland, Manipur and India’s Far East. To quote from one of the author’s notes used in the book, “Muivah + many leaders + bulk of I-M cadres (are) from Ukhrul, Senapati, Tamenglong in Manipur… how to find ‘honourable alternative’ in these homelands without upsetting Manipur’s ethnic applecart?… Naga settlement CANNOT come about without adjustments in I-M’s pocket boroughs in Manipur.”

In this book, the author has used ‘information and messages received and exchanged, notes and thoughts as preparatory to writing, notes and records of meetings, recapping a work-day, snippets from travel diaries and snatches from the notebook’ as part of the narrative. The quotation above is from one such note.

He also shows why it is equally difficult – if not more – for the government of India to agree to such a demand, as it would set Manipur afire. Neither would the Meiteis, the Vaishnavite Hindus who make up the largest community of Manipur, nor other tribal groups such as the Kukis and the Zo people are ready to allow Manipur’s hill districts to be involved in the Naga peace talks.

All such communities have armed groups claiming to represent their interests and, unlike the I-M and the umbrella organisation of seven Naga insurgent groups called Naga National Political Groups (NNGP) that are maintaining ceasefire with India, there are Manipuri armed groups that have not entered a ceasefire with the government and have gathered under the umbrella of Coordination Committee, CorCom in short.

Attempts to douse one fire would light another.

Throughout this 447-page book, published by Simon and Schuster, Chakravarti places many arguments and examples to illustrate how the Naga peace process is intrinsically linked to Manipur and its many ethnic groups and their internal conflicts. For this review, two examples should suffice.

Muivah, one of the biggest names in the Naga insurgency, could not visit his homeland in Manipur as of February 2022. In Chakravarti’s words, “It seemed likely that Muivah… would return home in a coffin, taken not by rage and rebellion, but by age.”

At the same time, there are Nagas living in the hills of Manipur who want a separate administrative arrangement within Manipur – popularly known as the Alternative Arrangement – the very prospect of which generates fear-psychosis and paranoia among the Meiti people and other non-Naga tribes in the state.

The Alternative Arrangement, as Chakravarti describes, demands the four hills districts of Chandel, Ukhrul, Tameglong and Senapati not to be under the government of Manipur, ‘have the same independence of politics and purpose as the Naga homelands in Nagaland’, answerable to ‘customary laws’ protected by the constitution of India and governed by autonomous district councils with the direct responsibility of New Delhi, not Imphal, to prevent any discrimination in development, infrastructure and employment opportunities.’

Here are some of the complexities that Chakravarti points out: The I-M, the largest among Naga rebel groups, does not want to leave the question of Naga homelands in Manipur, Assam and Arunachal Pradesh beyond the purview of peace talks. The Meiteis, the largest community in Manipur who live mostly in the Imphal valley, are vehemently opposed to the proposition, considering it an affront to Manipur’s territorial integrity.

In Manipur, the tribes living in the hills – the Nagas, the Kukis and the Zo people, mostly Christian by faith – consider themselves to have been deprived by Imphal’s valley-centric policies and demand the extension of the Sixth Schedule of the Indian constitution – which grants autonomy to certain regions in the northeast – in the hill areas. At the same time, the Kukis and the Zo people would not like to be part of a Naga homeland in Manipur as conceived in the Alternative Arrangement. In the hills, the Kuki and Naga rebel groups have engaged in bitter, bloody conflicts and the Kukis think they are still owed an apology from the I-M.

To move ahead with the Naga peace deal, the Indian government needs to gain the confidence of the Meitei people and in this regard, as Chakravarti puts it, “Sure-fire buy-in would be withdrawal of AFSPA, Manipur’s most explosive emotional trigger after territory.”

The APSPA, or the Armed Forces Special Power Act, is still in force in many parts of the northeast and provides immunity to members of the security forces from prosecution for alleged excesses.

The Eastern Gate is Chakravarti’s second book on the northeast, an area that he calls far-eastern India, after Highway 39,  which was released in 2012. The book touches upon issues of other states in the northeast but is essentially focused on Nagaland and Manipur.

A close watcher of the complex geo-ethno-political developments in the northeastern states, Chakravarti, in this book, offers crucial historical perspectives into the beginning of the Naga problem, elaborating how the British started showing Naga homelands as part of their territory on papers even as they enjoyed little or no authority over the land and its people, and how the government of India continued with the British policy. As a result, the Naga homeland along the Indo-Myanmar border was split between Myanmar and the Indian states of Nagaland, Assam, Manipur and Arunachal Pradesh.

The book, however, uses history mostly to elaborate the context of the present and the recent past, especially the scene onwards 2014, but the focus has been on discussing and weighing possible ways to bring peace to “the interlocked histories and territories of Manipur and Nagaland.”

It places one example and argument after another, from the writer’s own experiences of travels in the areas and interviews with people who matter – arms dealers, ethnic group leadership, rebel conduits, intelligence officers, politicians, rebel leaders – to newspaper reports and official documents to elaborate how the conflicts in Nagaland and Manipur cannot be solved in isolation.

As Chakravarti quoted Thangkosei Haokip, the president of Kuki Inpi (the apex body of the Kuki people) in Manipur, “If you solve the Naga problem… in isolation… you are inviting other problems also. Piecemeal solution won’t do it.”

In dealing with recent history, the book also throws some light into how the administrative highhandedness of the Congress-led Okram Ibobi Singh (2002-17) government, especially during its last leg, made it unpopular and how the BJP increased its footprints in Manipur, since the time of the Atal Bihari Vajpayee government at the Centre, targeting the valley-based, Vaishnavite Hindu community of Meiteis as their best-probable base.

The Hindu nationalist party, currently heading governments both in Manipur and the Centre, could in no way risk irking Manipur’s valley people.

“Manipur won’t give any concessions to Naga homelands/ Tangkhuls/ others without massive emotional + security + fiscal/ development sops. Naga peace (is) meaningless anyway without accommodation in Manipur + meaningful peace with Manipur rebels,” reads reads another of the author’s notes in the book.

As Chakravarti pointed out, the talks hit a dead-end after the I-M decided to insist on a separate flag and constitution as part of the solution, while the government insisted that these questions can be discussed in a post-solution scenario.

Chakravarti also shows how there has been a lack of sincerity on both sides – the government and the I-M – in concluding the peace talks even after about seven years from signing the Framework Agreement in the presence of Prime Minister Narendra Modi in 2015. 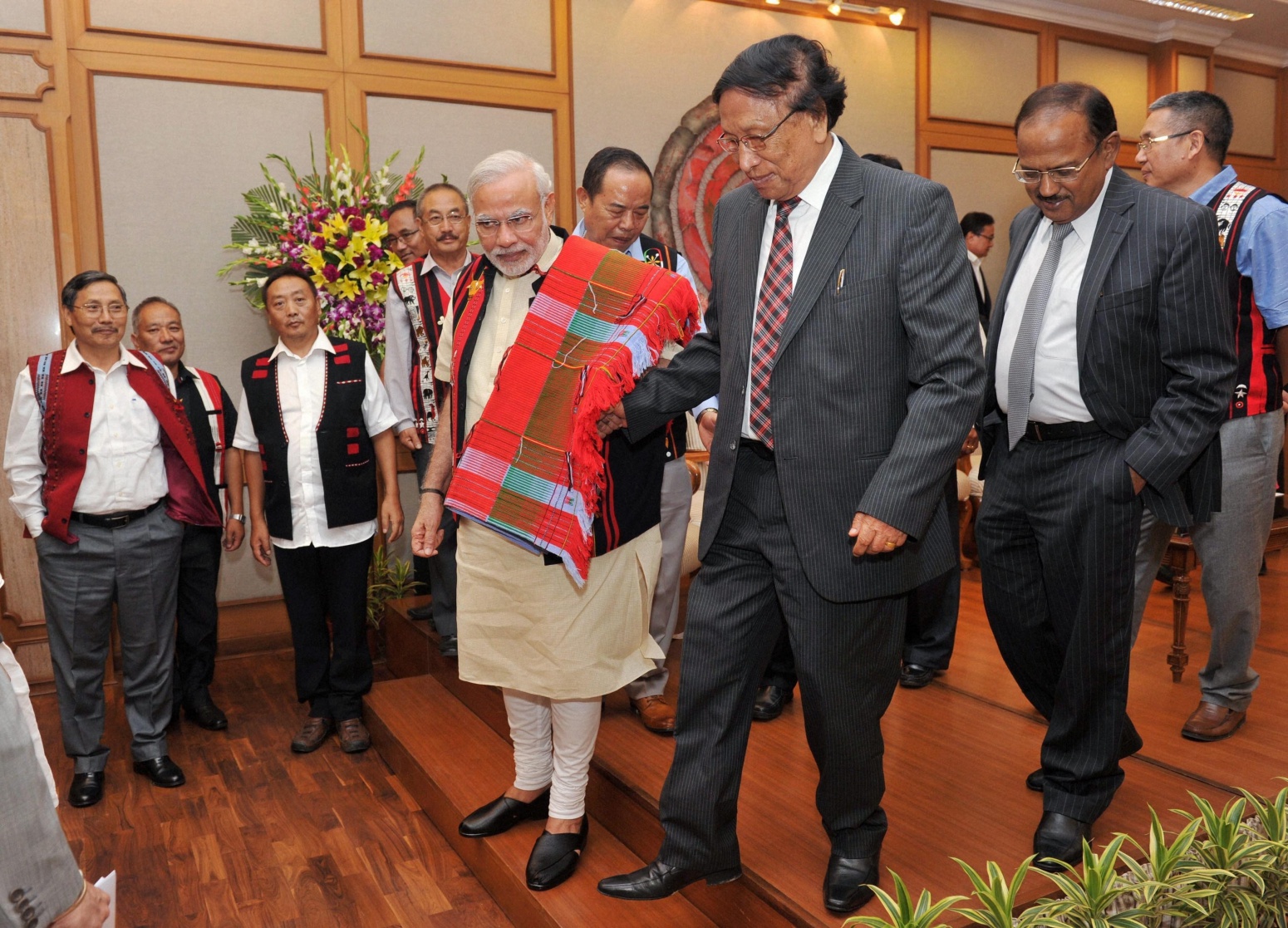 Prime Minister Narendra Modi with NSCN (I-M) general secretary Thuingaleng Muivah at the signing ceremony of a peace accord between the Government of India and NSCN, in 2015. NSA Ajit Doval is also seen. Photo: PTI

It needs to be remembered that the ceasefires with I-M and other militant groups have allowed them to maintain their ‘designated camps’ of armed troops, retain weapons and recruit and train cadres. For the peace process to succeed, there has to be disarmament, the cadres absorbed in police/paramilitary forces or the Army, other leaders absorbed in political and administrative mainstream (by way of creating an upper house of the assembly, as one mean) and Muivah needs to be given an honourable position as part of rehabilitation.

Muivah has his own problems, as the author points out: He doesn’t want to be seen as the person who surrendered before India dishonourably; Manipur would not accept him for political rehabilitation and; being from Manipur, he would not find much accommodation in Nagaland’s system either.

Chakravarti had suggested that Muivah could be made a governor of Nagaland but he also wrote that top government officials engaged in the talks were not considering that option.

So, is the government waiting for internal trouble to break out in the I-M once Muivah, who is now in his late 80s, is dead? In Chakravarti’s words, “Wait out M’s death & that of other leaders, benefit from I-M splitting into more factions which is inevitable if this plays out & and peace deal is delayed, & reel in who they can by offering the moon like they have done for all other factions?”

But that new state of chaos can also open up a new can of worms, who knows!

Without bringing peace to Nagaland and Manipur, the Union government’s ‘Act East Policy’ is not going to be of much significance beyond being a catchy nomenclature. Sealing the deal with the I-M is important from the perspective of peace and prosperity in the entire northeast, as apart from being the largest Naga rebel group, it has also been considered the ‘mother of insurgencies’ in the northeast because it provided a haven to other insurgent groups of the region. The I-M is certainly not the only stakeholder but the biggest of them, for sure.