In her book 'An Uneasy Embrace', Shobana Shankar is more interested in transnational entanglements between religious movements, merchants, and African Bollywood aficionados than figureheads. 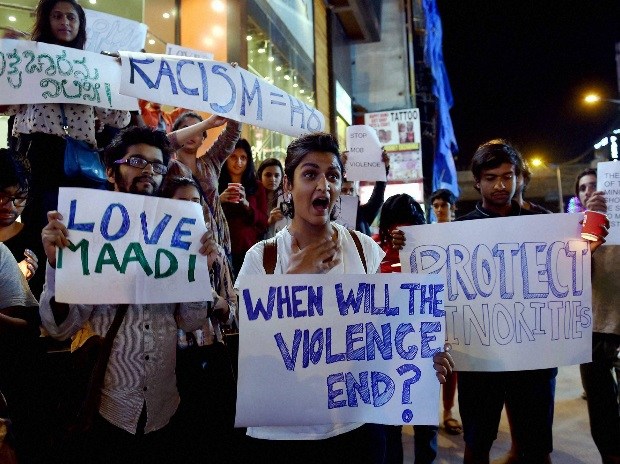 File photo of a protest in Bengaluru after a Tanzanian woman was attacked. Credit: PTI 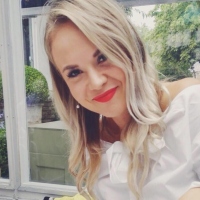 Here is one of the more quietly provocative statements about the academic study of India that I have recently encountered: “African historiography is an excellent vantage point for a postcolonial critique of India.” This is the premise of Shobana Shankar’s An Uneasy Embrace: Africa, India and the Spectre of Race, a global intellectual history of Afro-Indian (dis)connections that sets out to “take seriously indigenous ideologies and practices of difference and the relevance of race in the non-Western world”.

This is a revisionist project, twice over. It requires moving beyond the all-pervasive Americanised frame of #BlackLivesMatter in analysing race. It also demands revisiting the Indian insistence that its own engagements with the world are blind to race. 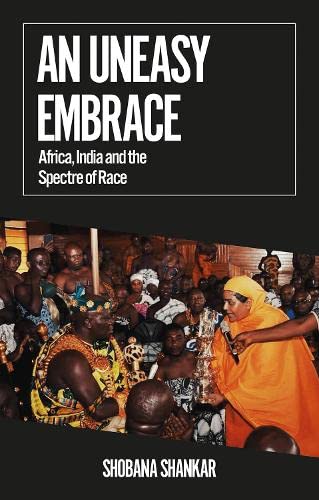 For Shankar, this dual project involves studying how racial imageries shape cultural projects between African and Indian communities, marked by a joint postcoloniality but separated by many mutual suspicions. This is an ambitious balancing act, which the book performs elegantly.

Politically significant themes of shared decolonial struggle feature in Shankar’s work, from the 1955 Afro-Asian Conference in Bandung to Nehru’s diplomacy of “non-racialism” and the African National Congress’s adaptation of Gandhian ahimsa in its fight against apartheid.

And yet, commendably, Shankar abstains from the diplomatic romanticism of Indian officialdom. She borrows from historian Gerard McCann to consider Afro-Asian solidarity a “stage-managed” performance of brotherhood, often compromised by the paternalism of Asian leaders towards African counterparts. British imperialism subjected both India and Africa to punishing racialised hierarchies. However, it also encouraged Africans and Indians to practice racism towards one another – a legacy that lingers.

Shankar proceeds to argue that “solidarity has too often meant elite alliances”. Academics and activists have fixed themselves on figureheads: Nehru, Gandhi and Ghana’s Nkrumah. Shankar is more interested in transnational entanglements between religious movements, merchants, poets, and African Bollywood aficionados. She also shifts the emphasis away from the well-travelled terrain of political campaigning, onto collective identities developed through art, religion, and travel.

This is Shankar’s central methodological move – something academics like to call “decentering”. Read: we move our attention away from the confines of colonial sources, the Western gaze, or indeed the elevation of postcolonial successor elites. This does not mean ignoring the power asymmetries that reproduce Western or local elite dominance. It does, however, allow for Africans and Indians to be protagonists, rather than passive objects of study, in their own histories.

Similarly – in contrast to the historical anthropologist Nicholas Dirks who argued for the Raj’s centrality in solidifying the concept of caste – Shankar suggests that race-adjacent concepts around difference, ancestry, and pollution are not purely Western categories simply imposed on African and Indian societies. If anything, these themes “gained attention in the postcolonial cultural traffic between Africa and India”.

Vice versa, we are also not bound to Western anti-racism vocabulary in making sense of how racialisation operates globally. This is an important conceptual pushback in a world in which provincially Western debates on race travel across the globe and loudly claim universal relevance.

These paradigm-shifting premises do not always, however, find expression in the empirical chapters. Shankar’s treatment of “Third World science” or the Black Atlantic life of Hinduism remains somewhat disjointed from the analytical task she has set herself. The detailed descriptions of mavericks and movements are fascinating in their own right but only sometimes attend to the complex questions of race and solidarity that Shankar raises in the Introduction. Perhaps the reader is invited to read between the lines. If so, a book this unorthodox is likely asking too much of its audience.

Africa, India, and the spectre of caste

Shankar comes tantalisingly close to spelling out her interpretation of the interplay between race and caste in Afro-Asian encounters. She shows the analytical centrality of caste when she draws parallels between post-apartheid White anxiety in South African universities regarding affirmative action for Black students and India’s post-Mandal agitations against caste reservations. She does so again when she narrates expressions of Savarna cultural disdain for African leaders in the Non-Aligned Movement.

She even mentions the Dalit Panthers – formed in Bombay in 1972, inspired by the Black Panthers of the US civil rights movement, and envisioned as an activist collective spanning the subcontinent, Africa, and beyond. Lingering notions of Indo-Aryan superiority over local Black populations, Shankar argues, also explain diasporic insularity among dominant-caste Indians across African and Caribbean societies.

These allusions gesture towards an interpretation of India’s global role that approximates work by Suraj Yengde, Sankaran Krishna, and myself: Indian hierarchies of caste have historically compromised common Afro-Asian battles against hierarchies of race in the world. Yet, while entanglements of race and caste are a central theme in the Introduction, they make more anecdotal appearances later. More sustained inquiries into race and caste – two historically powerful, descendance-based, transnational systems of oppression – would be both academically and politically urgent.

Perhaps the public mood only allows for the kinds of understatements and allusions that Shankar formulates. As aspects of the breathless debate following the release of Isabel Wilkerson’s Caste: The Origins of Our Discontents in 2020 showed, there is little argumentative space in Indian public life for parallels between caste and race. This is a shame. While it runs the risk of being overstretched and abused, there is much to be learned and unlearned from a serious study of the race-caste nexus. What is frustrating about Wilkerson’s book is the myopically American treatment of India which shows cultural highhandedness, an impressionistic grasp of caste and the Indian context, and a subliminal desire to mostly talk about race in America, with India reduced to an exotic justificatory backdrop.

Shankar’s book escapes this US-centrism and deserves to be read on its own terms. Scholars of the race-caste nexus may have been hungry for more explicit engagement, but perhaps Shankar’s understated argumentation will persuade critics of Wilkerson’s work to have a more patient second look at race and caste.

Gandhi beyond hagiography and hashtags

Any book on Afro-Indian relations would be incomplete without Gandhi, but Shankar does an admirable job avoiding the analysis from being subsumed under his all-consuming presence. She writes against the hagiographical tone of historians like Ramachandra Guha, insisting that Gandhi’s mixed record on race be considered in its complexity.

Her entry point is the protest movement around #GandhiMustFall, reminiscent of the #RhodesMustFall movement demanding the removal of a Rhodes statue in South Africa, but addressing itself to the removal of a Gandhi statue that the Indian government gifted to the University of Ghana, Legon, in 2016. African academics, activists, and students protested against the deification of Gandhi in a Black African country, given his public record of racist writing on Blacks in South Africa, and his paternalism towards India’s Dalits.

Quoted is, for example, Gandhi’s claim in 1893 “that both the English and the Indians spring from a common stock, called the Indo-Aryan”, jointly superior to Black Africans. Ambedkar, activists argued, would have made a worthier statue.

The response among much of Delhi’s intelligentsia – that gullible African dissenters were manipulated by American cultural impositions around anti-racism – was characteristic of the subliminal belief that African thinkers cannot have sovereign intellectual agency. It reflected, Shankar writes, “the existing hierarchies in ‘brown over Black’ in global knowledge production”. This is a welcome intervention. Gandhi deserves to be studied beyond blunt hashtags and with generous nuance, but never with dull reverence. 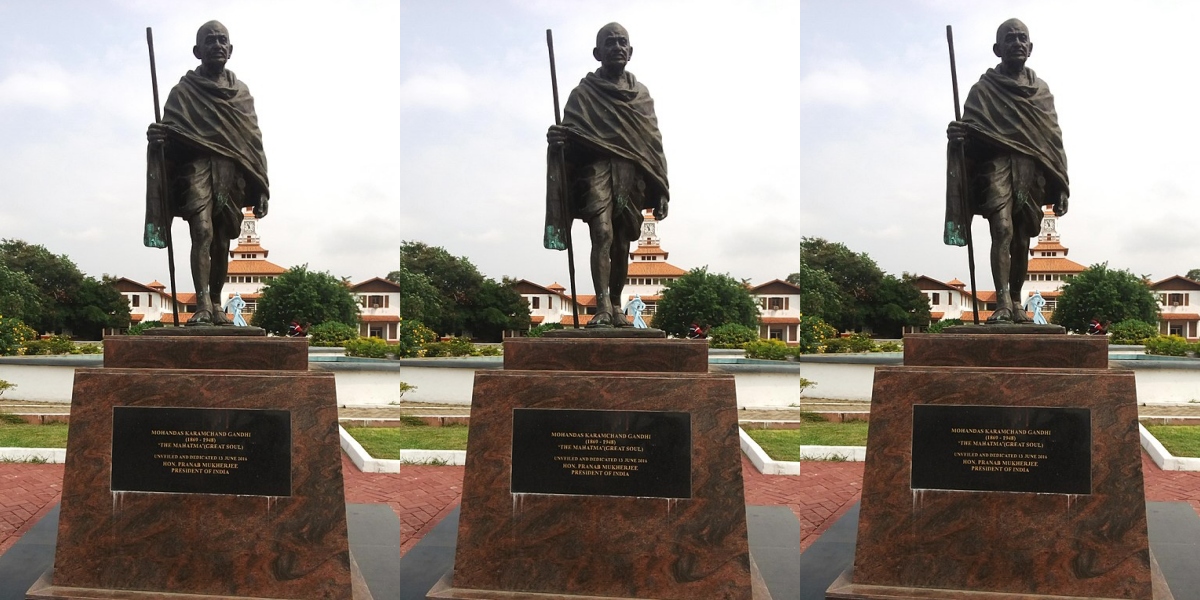 Statue of Mahatma Gandhi at the University of Legon in Ghana. Photo: Enock4seth/Wikimedia Commons, CC BY-SA 4.0

While Indian business and political interests may look upon Africa as a market transaction or a blank space into which Indian culture expands, Shankar asks that we consider how cultural entanglements run both ways. Can citizens wedded to ideals of a secular India find solace, for example, in syncretic pan-African humanism?

By extension, Shankar’s thinking suggests that a sincere Indian conversation about race would begin with the acknowledgement that unrequested gift-giving – Gandhi’s statue was delivered without consultation with university faculty or students – is a shallow kind of solidarity. The quick offence and paternalism in the aftermath of #GandhiMustFall are perhaps a helpful example of what Shankar means about African historiography making for a productive vantage point for a postcolonial critique of India. What she offers instead is a deeper, democratised vision of Afro-Indian collaboration.

Kira Huju is a fellow in International Relations at the London School of Economics and Political Science. Her book The Cosmopolitan Elite: Indian Diplomats and the Social Hierarchies of Global Order will be published by Oxford University Press in 2023.