“I might be doing some representing. But I don’t represent, never offer the correct version of history,” said the poet.

In the 15th chapter of the first biography of Agha Shahid Ali, the young biographer, Manan Kapoor, quotes the poet from an interview, where he speaks about his response to tragic political events like the Armenian massacre: “I might be doing some representing. But I don’t represent, never offer the correct version of history.”

For such a poet, history does not represent the idea of truth, but of human encounters. For a poet to respond to conflicts in history that are political, it is the meaning and fate of human life caught in that violent encounter which is of primary importance. The poet – and his poem – also does not represent “the” correct version of what he writes about. It is one among many versions. Poetry is not a truth-claim, but an affirmation of life. 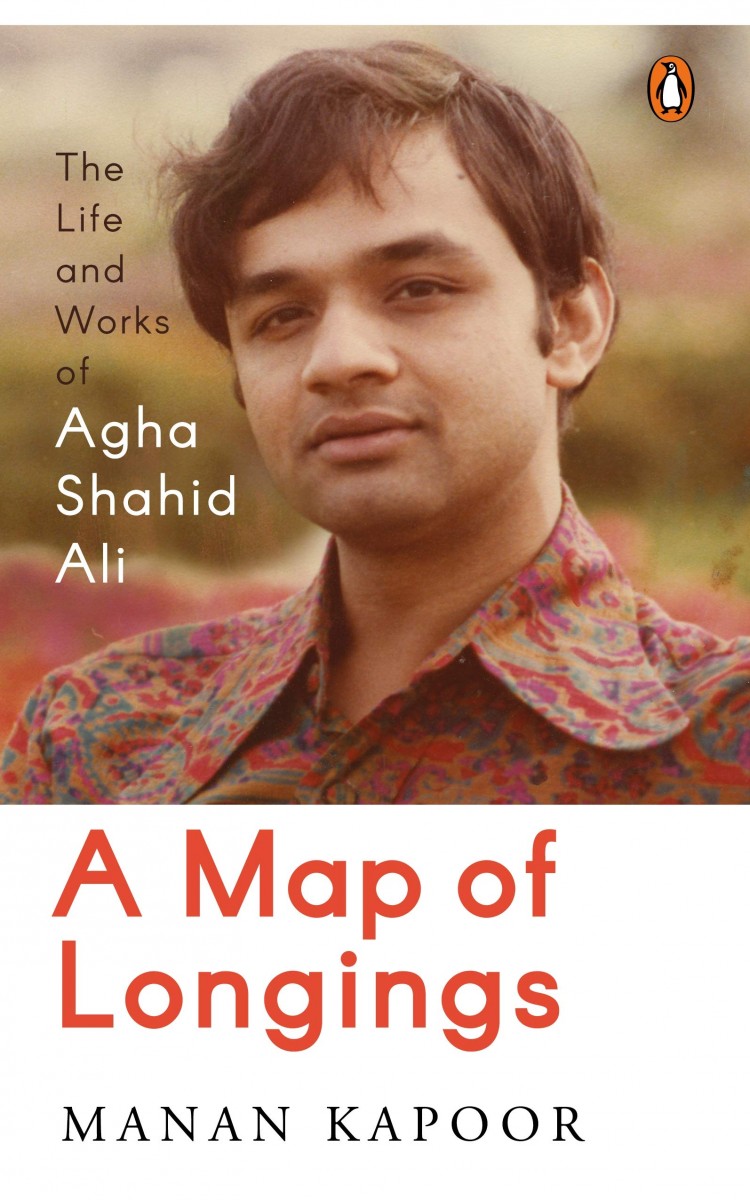 A Map of Longings: The Life and Works of Agha Shahid Ali by Manan Kapoor. Publisher: Penguin (June 2021).

A Map of Longings, a poetic biography of Ali, invites us to think on his work and life. A poet’s work is of course the primary material for thinking. But biographies contribute to background information that may illuminate key aspects of a poet’s work. Kapoor’s book is confessedly an act of love that leads to research.

Kapoor’s intentions behind writing this biography on Ali were to “memorialize his life”. But he wanted to focus on those aspects which would “ultimately lead the reader back to his poetry”. This is a precisely drawn-out task, where we get a chance to both appreciate the various biographical instances of Ali’s poems, and in what ways it poses limits on his work.

By limits, I mean those aspects of Ali’s life which not only offer us glimpses to his poetic concerns but also structure them. The poet negotiates these structures on his way to maturity. On most occasions, Kapoor is generous in his reading of Ali’s life and craft. But we encounter the rare moment when Kapoor tells us, when it came to free verse (when Ali is not using formal schemes like the canzone), his “emotions might have got the better of him”. Such departures are also valuable.

Once Ali leaves Delhi for America, I felt both, the poet and biographer’s narrative, breathe more easily. But before I go into Ali’s American phase, which interests me most, a word about his intense relation with Begum Akhtar, whose death in 1974, ends the Delhi chapter of Ali’s life. Kapoor gives us a good indication of how Ali learnt the nuances of Urdu’s musical quality through Akhtar’s singing. It is rare for a poet to study the poetic craft behind someone’s singing. Ali captures the poetics of the disembodied voice of the singer after she died, in the lines he wrote on Akhtar.

Kapoor provides us with extensive details of Ali’s family history. Familial roots in a mature poet often find ironic expression in his poetry. There are difficult ghosts to deal with. Ali grew up with the social and cultural privileges of his family, vis-à-vis the complex social milieu in Kashmir. One can sense some degree of alienation. Despite so much influence that came through his parents, Ali eagerly took to America. Escape to the West was freedom, in more ways than one.

One of the best things I learnt as a poet from this biography is T.S. Eliot’s rich influence on Ali. It is true that The Four Quartets has invaluable lessons on structure, style and rhythm. The escape from emotion and personality that Eliot advocated for poets, however, does not always find equivalence in Ali’s poetry. His laments on the death of his mother and Begum Akhtar are lyrical dirges, very unlike Eliot. But when it came to his sexual identity, Ali was more careful. This isn’t a controversial issue, but one of preference. I believe it is not just from Eliot, but also from the tradition of the ghazal, Ali learnt to keep the lover allusive. He wove the figure of the lover into his poems (particularly, the ghazals) with romantic and sensuous suggestiveness.

Consider the couplet, “What will suffice for a true-love knot? Even the rain? / But he has bought grief’s lottery, bought even the rain.” And further in the same poem, “Drought was over. Where was I? Drinks were on the house. / For mixers, my love, you’d poured—what?—even the rain.”

It is still worth critically probing into why Ali chose this manner of depicting the lover, and not what the famous gay poets of the 20th century – Garcia Lorca, Luis Cernuda, and Arthur Rimbaud, among others – chose to celebrate more openly. Ali’s own justifications can’t foreclose critical interest. The biography, for instance, mentions the poet, James Merill and his partner, Peter Hooten. One is left wondering about Ali’s lovers.

Kapoor emphasises the important point about Ali managing to expertly fuse the formal schemes of American poetry with the lyrical intensity of Urdu poetry. Joseph Donahue has observed that “Ali found himself… at one of the richest points of intersection in the Western literary tradition: where Europe and the kingdom(s) formerly known as Persia meet.”

There is an interesting paradox about Ali being the exiled poet – not political, but existential, and linguistic – also being the poet of witnessing. There is scope to study both tropes used by Ali to reclaim his distant, if not lost, ties with Kashmir. Ali is a brilliant precursor to a growing political condition that confronts people facing – and escaping – a sense of persecution. He is Kashmir’s most memorable immigrant poet. The funny misreading of his poem, “The Country without a Post Office”, reaching the Indian parliament showcases Ali’s anguish about what has gone terribly wrong in our history.

In one of the most poignant moments, quite sensitively described in the biography, Ali decides to write his last poem against the knowledge of his impending death. “This is the only thing that matters”, he said on the phone. He wanted to finish the poem, before death finished him. Time always sides with death. But we have language on our side.