Who knows what’s in store, how they shall choose to paint the unseen past, when they can make what we all seeing in the present disappear? 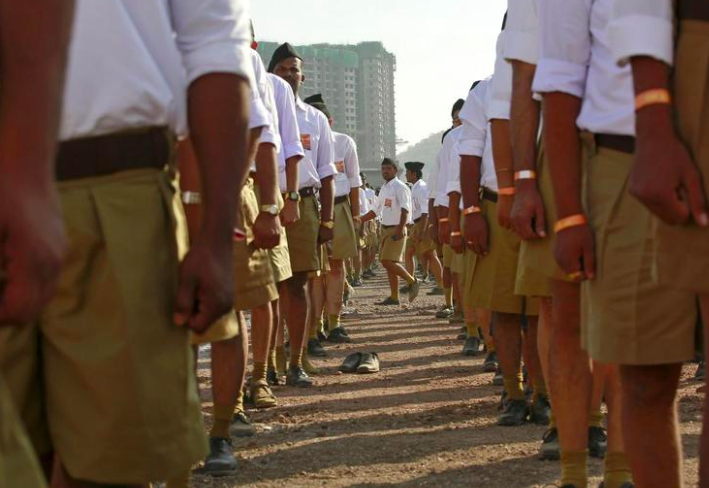 In his book Chintana Ganga, Golwalkar seeks to bury the federal system of India as a Union of States. In one swoop, BJP buried the federal system ― by introducing GST. On the face of it, GST appears to be an economic reform. But what of its impact? By agreeing to this new regime, the states of the Union have ceded their financial autonomy to the Centre. We are now in a situation where the states’ wealth is placed at the foot of the Centre and they have to then beg for their share from it. By burying the federal system, the central BJP government has fulfilled their Guru Golwalkar’s desire and paid obeisance to him ― by taking the very life of the federal system which is the most important feature of our Constitution! Also staring at us now are efforts to make Hindi the lingua franca ― the first step towards achieving the goal of making Sanskrit the common language of our country. These are all small steps towards eventually realising their anti-pluralist aspiration of one nation, one language, one race, one leader, etc.

In education, it’s the same story. RSS always lays its hands first on education and history. An example of this hatred is the omission of this sentence from the 6th standard textbook: “Tipu Sultan fought many battles against the British. He tried to oust the British from the country by allying with the French.” Likewise, Tipu’s forays into sericulture, land reform, small farm loans, construction of a mint etc. were abandoned. Similarly, unable to bear the section ‘Rise of New Religions’, wherein Jainism and Buddhism are introduced as religions, the Karnataka government has changed it to Jain and Buddhist sects (of Hinduism) and moved it to the 8th class! The true religions of India, such as Jainism, Buddhism, Sikhism, Lingayatism have become bites, which can’t be swallowed by the smaller Chaturvarna Hindu group. RSS is working hard to wipe out the true religions of India, which all reject the Chaturvarna system.

This revisionism of textbooks is new. When the BJP-led NDA came to power in 1998, Human Resource Development Minister Murli Manohar Joshi included ‘Priesthood and Ritualism’ in the school curriculum. During his time, astrology began to be taught instead of astronomy. Learning how to perform the Putrakameshthi Yagna, a (Vedic) ritual to get a male child, was also introduced. They are inculcating unfounded beliefs and foolishness in children’s minds. Recalling Golwalkar’s call for involvement in RSS activities to be essentially devoid of any critical thinking and discernment, once they are in power, they have set about implementing this in children’s education. Recently, CBSE has removed several topics from their syllabus. Of these, topics such as democracy and diversity, impact of globalisation on agriculture, mass movements and communalism were removed from the Class 10 syllabus. It is for this kind of school curriculum excisions that the RSS has nurtured one of its offspring, the Shiksha Sanskriti Utthan Nyas. It has consistently been pressuring NCERT to remove from textbooks, allusions to “former PM Manmohan Singh’s magnanimous apology for the Sikh riots”, and the “killing of around 2,000 Muslims in the 2002 Gujarat riots”. This is their chicanery. Who knows what’s in store, how they shall choose to paint the unseen past, when they can make what we all seeing in the present disappear?

If this continues, there shall come a time when we will read read in our textbooks depictions of RSS founder Hedgewar, who spurned India’s freedom struggle, and Savarkar, hailed as a ‘Veer’ (hero) today, who was released from jail after he wrote an apology letter to the British colonial government, as the people who brought independence (from the British) to India. Not only that, the story of Godse who killed Gandhi may morph into a legend of him being a defender of Hindu Dharma. And what of the RSS sagas yet to unfold?