When Rebel Swayamsevaks Took on ABVP and Were Attacked

An excerpt from Bhanwar Meghwanshi’s book 'I Could Not Be Hindu: The Story of a Dalit in the RSS'. 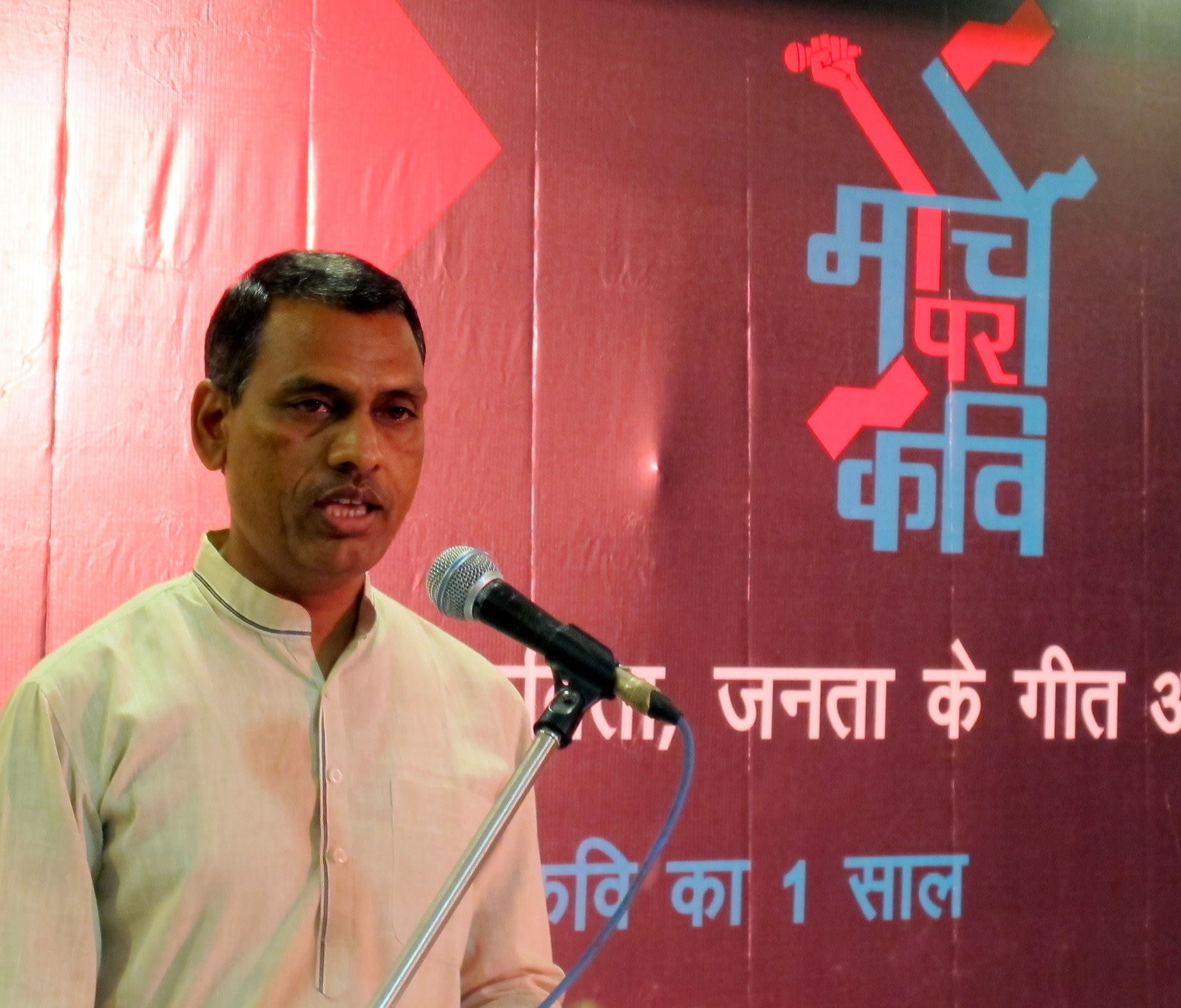 This is an excerpt from Bhanwar Meghawanshi’s book I Could Not Be Hindu: The Story of a Dalit in the RSS (Navayana, 2020), translated by Nivedita Menon from Hindi.

When we took on the ABVP

I was by now well equipped to hit the Indian version of the Taliban where it hurt. I started off by entering student politics. In 1993, I enrolled for a Bachelor of Arts degree in Manikyalal Verma Government College in Bhilwara where the RSS student wing, the Akhil Bharatiya Vidyarthi Parishad (ABVP), was dominant. The same year, a new student organisation called Vidyarthi Adhikar Rakshak Sangh or VARS—Organisation for the Protection of Students’ Rights—was started in opposition to the ABVP. It was headed by another rebel swayamsevak, Brijraj Krishna Upadhyaya, who broke with the ABVP because he was not given a leadership position. Dhiraj Gujjar and I threw our lot with him.

In its inaugural phase I was the general secretary of VARS. We began to pull the rug from under the feet of the Sanghi student organisation. We set up units of VARS in Bhilwara and Shahpura. People who wanted freedom from the stranglehold of the Sangh began to see VARS as an alternative. Our leader Brijraj Krishna was extraordinarily brave, very spirited. The Sangh attacked him ferociously, they could not tolerate his starting a new organisation. He was physically attacked many times by the ABVP, beaten up mercilessly even in public. Once, at the Triveni crossing in Mandalgarh, they attacked him with a screwdriver, drove it into his skull and left him for dead. This last attack was meant to punish him because VARS activists were exposing the criminal activities of people linked to the Sangh. Bhanwar Meghwanshi
I Could Not Be Hindu: The Story of a Dalit in the RSS
Navayana, 2020

Those days in Mandalgarh town, a mining area, the short term pracharaks and vistaraks of the Sangh were involved in protection rackets with gangs manufacturing illegal explosives and bootlegged liquor. I had no idea about this when I was in the RSS and it came to my knowledge only when I left the organisation. We learnt that some respectable bhaisahabs of the Sangh were also extorting money from these gangs. Because we raised these matters in public, we had to pay the price. VARS as an organisation became the target of attack, but Brijraj Krishna bore the brunt of it, and received such beatings that he was almost martyred at the hands of Sanghi swayamsevaks. Mandalgarh is a sand mining region, and the mining mafia thinks nothing of killing anyone who gets in their way. The intention was to murder Upadhyaya at the Triveni crossing, but passers-by got him, gravely wounded as he was, to Mahatma Gandhi Hospital in Bhilwara in time. After a lengthy period of treatment, he did recover.

I remained friends with him for a long time, and we continued to work in student politics. Eventually he moved into the arena of state elections and contested as an independent for the legislative assembly. He is now active in the Congress, and never returned to the BJP or the RSS.

The desire for revenge

I wanted to take revenge on the RSS in whatever way I could, and was ready to join hands with anybody for this. After all, the enemy of an enemy is a friend. So I started to meet with all the people that the RSS had taught me were bad. My circle of acquaintances began to include people from other faiths and secular-minded people too. Earlier, I had known hardly any people of this kind, but I had come across a few Muslims in another context. Those days I used to attend poetry gatherings at which I would recite shoddy satirical verse in Rajasthani. Here I met Jamaluddin ‘Jauhar’, Aziz ‘Zakhmi’ and Maulana Naushad Alam. There was also a trade union leader called Allauddin ‘Bedil’. They used to recite poetry too, and we often ran into one another at these gatherings.

I decided to deepen my acquaintance with such people. Naushad Alam was about my age, and we used to talk about many things other than literature. So I set off to meet him.

Naushad Alam was from Bihar originally, and lived in Bhagwanpura near my village Sirdiyas, where he was the imam of the mosque and also taught in the madarsa. Writing ghazals was his hobby. Later he went on to become the imam of the Gulnagari mosque in Bhilwara. By then, the second wave of karseva had been completed and the Babri Masjid had been destroyed. Muslims were angry and, especially among Muslim youth, there was intense rage towards the Sangh. It was in these circumstances that I set off to meet Naushad, albeit with some hesitation.

There I was, sitting in a madarsa attached to the mosque. While in the Sangh, I had heard a lot about weapons being stored in the basements of mosques, which made me a little scared, but now that I was here, I was determined to have a conversation. After finishing with his teaching at the madarsa, Naushad went to offer namaz. When he returned, we started talking.

This conversation started to melt the ice of hatred towards Muslims I held in my heart. Those whom I thought dangerous and had been suspicious of, turned out to be people like me. Just like us, in their laughter, their tears, their anger; just as patriotic as us; as beset by difficult circumstances as we are. For the first time in my life I went inside a mosque, sat in a madarsa, saw their kitchen, their bedrooms, sat with them, ate with them. This was the village, Bhagwanpura, where food from my home had been rejected and thrown away, and today in that very village, I sat down to eat with a maulana.

All misunderstandings vanished, and that one meeting—where we primarily discussed poetry and patriotism—built such a strong relationship that it stands firm till today. Our encounter that day and the hours of conversation in the days that followed, ranging from poetry to politics, resulted in the recognition that the condition of Muslims and Dalits was equally bad, that our enemy was the same, and we should fight it together. The decision was taken to form two organisations, one of Dalit youth and another of Muslim youth. In December 1993, I started the Dalit Action Force and Maulana Naushad started the Hyder-e-karrar Islamic Sevak Sangh. The objective of both was to expose the activities of the RSS and whenever necessary to launch direct campaigns against them. These organisations held discussions in different places and many people began joining in. But before we could really take off, information about our efforts reached the intelligence agencies. This information was available from our own press notes and from an interview with me in Dahakte Angaarey (a periodical I started, about which more later). Our mistake in publicising our plans before they could take off taught us that while this may bring publicity, it was not the way to build movements or organisations, because the CID (Criminal Investigation Department) and IB (Intelligence Bureau) joined with the local police in going after us with threats and warnings.

Also read: Meerut: Dalits Protest RSS Use of ‘Untouchable’ for Saint-Poets in Hoardings

So our two organisations were stillborn. We were helpless. But our failure did not defeat me. Rather, my anger grew.

Naushad’s quest eventually led him to the Communist Party of India–Marxist Leninist (CPI-ML), and he served as block president of Salkuan Bazaar in Saharsa district of Bihar for four years. He is now Kosi zone president of the Aam Aadmi Party.

I, for my part, decided that the way to counter the RSS was to convert out of Hinduism.

Bhanwar Meghwanshi is an activist and a journalist chronicling the Dalit movement. Main Ek Swayamsevak Tha (2019) is his first book translated by Nivedita Menon from Hindi.