Baig Ehsas: The ‘Prince of Stories’ from Hyderabad

Professor Mohammed Baig, a Sahitya Akademi awardee from Hyderabad, passed away on September 8 at the age of 73.

Curfew, a story by Baig Ehsas, gave me an opportunity to know him. I remember witnessing curfews as a schoolboy in the 1990s, amid a teakwood forest in an Indian town; full of wildlife, very far away from Hyderabad. I did not understand much then except that it was a holiday.

Almost two decades later, Baig sahib’s Urdu story refreshed my childhood memories. With a strong sense of attachment to the story, I translated a few pages of it and contacted Baig sahib through his nephew. This opportunity helped me understand him as a person, a litterateur and the ‘prince of stories’ from Hyderabad.

He accepted my invitation to meet him. It was evening when I rang the doorbell of his flat in the Tolichowki area of the city. A handsome man in black-frame eyeglasses opened the door with a smile. I looked at him. He was more than six feet tall with black hair, fair skin, a square face and broad shoulders.

Before I could judge him to be a retired officer of the air force or navy, in his tailored-fit kurta and pyjamas, his intense eyes scanned me. I felt embarrassed. It was my first meeting with him. His nephew and I immediately greeted him with salaam. He then softly asked us to come in and be seated in the diwan khana.

He went into the kitchen and returned with pastries, Osmania biscuits and two cups of chai. He asked us to start with snacks and then take the tea. We obeyed.

His nephew introduced me, after which Baig sahib turned to me and asked about where I come from. I narrated to him the story of Adilabad, its forest, Hindu-Muslim violence and coexistence and curfews. He was all ears when I told the story and even asked a few questions about the local culture and trade.

In the meantime, I cautiously took out a page of my English translation of Curfew and extended it towards him. He looked at the sample, read a few paragraphs and then said, “Accha hai. Professor Tutun also translated a few stories of mine.”

His stories about Hyderabad

A few months later, I went to him with the published copy of Curfew. I expressed my desire to translate his stories about Hyderabad. Baig sahib stood up from the sofa, delicately walked towards his book shelves and pulled out copies of Dakhma and Hanzal. With a pencil, he marked the stories in both the collections for translation. Pointing to Nami Danam, he said, “It’s dear to me. I would want you to start with this.” I nodded.

He then produced three collections of short stories; Kosha-e-Gandum, Hanzal and Dakhma. His stories, particularly the ones related to Hyderabad, throw light on the history, culture and people of the city. I had the opportunity, under his guidance, to translate those into English and have them published as Shades of the City. 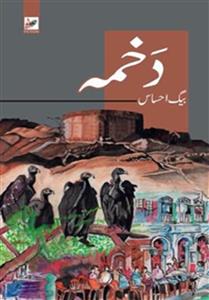 Nami Danam, his favorite one, is a Sufi tale. A man troubled by a materialistic problem knocks on the door of a Sufi’s dargah in Nampally. He gets what he wished for, but his quest for solution and solace transforms him into a miskeen (one with nothing who asks others for help). Upon enquiry, I came to know that Baig sahib had visited the Yousufain dargah multiple times and literally turned himself into a miskeen to write this story.

In another story, Rang Ka Saya, he gives us a glimpse into the situation of Muslims in post-Partition Hyderabad. It is a story of a young man from the Muslim community who falls in love with a lower caste Hindu girl.

Two of his other stories, Dakhma and Dard Ke Khemey, reveal the culture-clash and coexistence after the fall of the Nizams.

These stories show his level of attachment to Hyderabad; its culture, history and language. Mundane events from the city-dwellers receive focus. Professor Tutun Mukharjee says that his stories explore “a range of emotions” such as “confusion, pain, regret, remorse, anxiety, alienation.”

He uses symbolic and allegorical techniques in crafting stories, observes Gopichand Narang, “to delineate the personal and social problems of the Muslim milieu, especially in and around Hyderabad and their emotional links with expatriates living in the Gulf countries.”

At times, the language and characters in his fiction remind me of the renowned short story writer Manto. For me, he was no doubt a prince – in appearance and storytelling!

His dear friend, Padma Shri-awardee Mujtaba Hussain, rightly said, “In my personal opinion, if a list of top five contemporary short story writers was to be prepared, [the] name of Baig Ehsas would be in it. He is a true, sincere and honest short story writer.”

Baig sahib started his writing career early in life. He worked for a magazine called Filmi Tasveer before joining Osmania University as a lecturer.

In his academic career, he contributed hundreds of literary pieces to various Urdu journals and newspapers, both in the South and the North. Besides, he began editing Sabras, a well-respected literary journal published by the Idara-e-Adabiyat-e-Urdu.

In the first wave of the COVID-19 pandemic, he fell sick and was admitted to hospital. He fought the disease hard and came back home healthy.

In a courtesy call, I inquired about Sabras. He said it could not be brought out due to the lack of printing facilities after lockdown. I suggested he opt for online publication. Luckily, the last copy he shared was a PDF of the July, 2021 issue.

In our penultimate meeting, he talked about a story he wanted to write on the theme of transgender people. I remember his soft voice, in which I listened to the story for an hour or so. The voice remains intact in my memory, just like his radiant face, which I saw at his funeral.

In his death, Hyderabad has not only lost a modern storyteller, a credulous critic and a selfless gentleman but also a treasure of untold stories.

People familiar with Baig sahib would remember him for the politeness in his expression, the deliberateness in his action, the generosity in his hospitality and the ceremoniousness in his attire.

S.M. Fasiullah is a research scholar at Maulana Azad National Urdu University, pursuing his PhD in ‘Hyderabad in Fiction’. He received a Gold Medal in M.A. English. He can be contacted at smfasiullah@gmail.com.