Review: 'Gun Island' Is Amitav Ghosh's Most Tender Book Yet

The book trains its eyes on climate change and the refugee crisis through myth, legend, history and the so-called ‘irrational’. 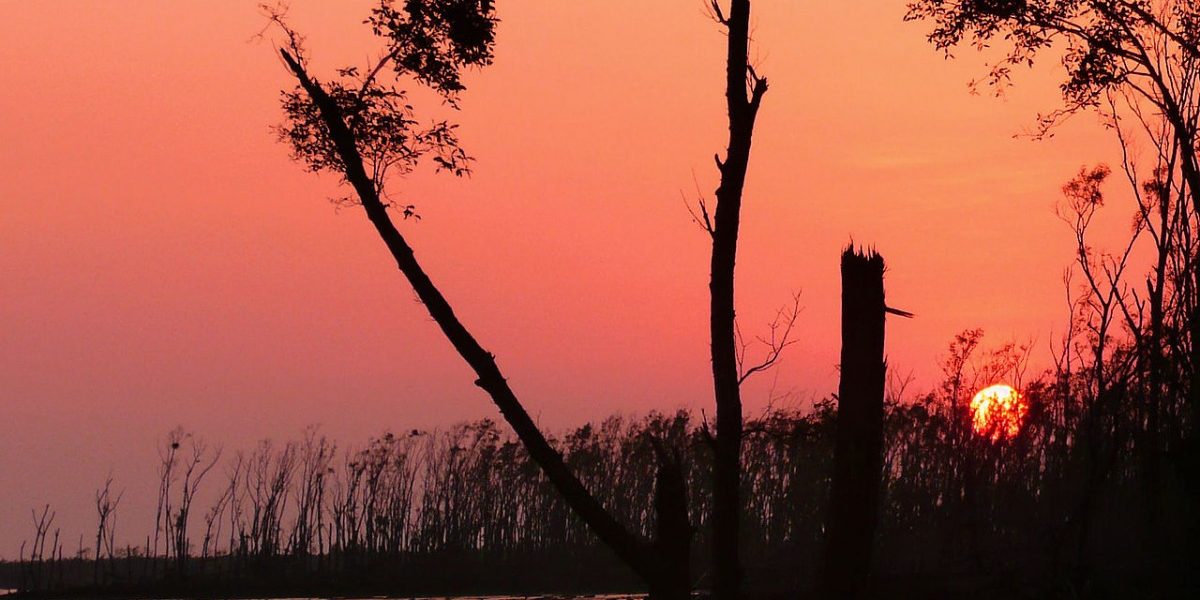 Through repeated encounters with the natural world, Ghosh brings home the horror of the climate crisis. Image: Wikimedia Commons

A lonely, ageing Bengali man who deals in rare books and antiquities in New York finds himself reluctantly drawn into an obscure legend from the Sunderbans. This legend is connected to a shrine to a man called Bonduki Sadagar, or the Gun Merchant, who fled from the ire of the local snake goddess, Manasa Devi, and paid a price for doing so. This is the beguiling premise upon which Amitav Ghosh’s latest novel, Gun Island, is built.

From West Bengal, the story travels with its protagonist, Deen, upon whose inner life much of its telling is hinged, to the US, where he lives and works, to Europe – specifically another riverine city, Venice – where he grapples with both the mysterious and the brutally real in equal measure. In fact, the real and the fantastical intertwine in a book that can be read in multiple ways – as a paean to the lessons of history and myth, a rallying cry against the climate crisis and the persecution of refugees, an ode to scholarship and bibliophilia, including an exploration of linguistics and print culture, or as a triumph of speculative fiction.

Some of this is to be expected, knowing Ghosh’s oeuvre. That he would write a book about the devastating environmental and human impact of climate change seemed a given as soon as he published The Great Derangement, one of the central questions of which was why authors of literary fiction do not tackle questions of climate change given its grave consequences for humanity. But Ghosh’s treatment of this story in Gun Island is still surprising in some ways. For one thing, although key characters from the Hungry Tide (Nilima Bose, Moyna and the cetologist Piya) return in this story, in its telling and concerns it feels far closer to what Ghosh did with the Calcutta Chromosome.

Also read | Authors Are Part of the Climate Change Problem In some ways Gun Island goes a step further than Chromosome, outrightly debating the merits of a positivist worldview with the bemused, Anglicised Deen. It does this through the voice of Cinta, a brilliant academic from Venice with a long, celebrated career and a tragic personal history. It doesn’t hurt that Deen is utterly fascinated by and a little besotted with her. At one point early on in the novel, she berates him for rubbishing a folk tale in a jatra performance as “superstitious mumbo-jumbo”.

She says: “Why do you use all these religious words? Like “superstitious” and “supernatural”? Don’t you know that it was the Catholic Inquisition that put these words into currency?” When Deen objects, saying it is all semantics, she responds: “Yes, you’re right. But the whole world is made up of semantics and yours are those of the seventeenth century. Even though you think you are so modern.”

The presence of the esoteric, surrealistic quality to the book feels doubly surprising to this writer because in an interview about The Great Derangement to The Wire, Ghosh had insisted that fiction about climate change would be more impactful if it is situated in strictly realistic worlds to drive home the consequences to this world as it is, in real terms. (He had also slightly balked at the suggestion that The Calcutta Chromosome could be categorised as science fiction.) But the occult and the supernatural haunt the pages of Gun Island and propel it forward at every turn – whether it is via hauntings or by the repeated appearance of the creatures associated with Manasa Devi – snakes and spiders.

But Ghosh seems to have marvellously lost his own argument. Nothing about the non-realistic parts of his story takes away from the telling of its story about two intertwined issues – human rights (specifically the rights of refugees) and the climate crisis. He asks urgent, important questions about what migration and movement means, what closed borders and xenophobia are doing to people whose own countries have been historically devastated by colonialism, what this repeating of imperialist history (including the history of the slave trade) means for today’s world. They find their most compelling realisation in the love story between Rafi and Tipu, two young men from the Sunderbans who make the perilous journey to Europe together, until they get separated.

Through repeated encounters with the natural world, which is given the same agency it was given in The Great Derangement, he brings home the horror of the climate crisis.

It is the turning over of several binaries and his deeply felt, gentle turning away from the ideals of anthropocentrism that is compelling about his approach to telling Gun Island. Cinta, who is in many ways Deen’s intellectual and emotional mentor (and performs the gendered labour of ‘educating’ him that is very familiar to anyone who is not a cisgender man but has to deal with them) tells him:

“You mustn’t underestimate the power of stories. There is something in them that is elemental and inexplicable. Haven’t you heard it said that what makes us human, what separates us from animals, is the faculty of storytelling? But what if the truth were even stranger? What if it were the other way around? What if the faculty of storytelling were not specifically human but rather the last remnant of our animal selves?”

This is done through the experiences of extreme weather events (from an unseasonal hailstorm to a devastating cyclone), but also through quieter encounters with the natural in ways that urban populations are increasingly not able to even contemplate – a snakebite in Los Angeles, a venomous spider in a big city apartment that has never been seen before. It is in the terror of these moments that our utter lack of preparedness with the hugest consequences of climate change, when they come, is reflected.

Of course, these are already here for some of the most marginalised people and communities around the world, a fact that has not escaped Ghosh. The proposed Rampal Power Station (though it is never named) finds mention in Ghosh’s story, where he shows us not only the ecological costs of this, but the human costs of life in the mangroves that are so crucial to the ecological well-being of the places in its vicinity. The crises mirror each other, endlessly connected in ways that leave the reader aghast.

In fact, mirrors abound in this story – and this becomes important because it is the lessons of history that Ghosh seems to want us to pay close attention to. Venice and Varanasi are likened to each other in a particularly beautiful paragraph, and there is not one but two snake goddesses that find mention (the other one is A-sa-sa-ra-me, the Minoan goddess).

Ghosh reminds us through his scholar characters that the world has already witnessed the ‘Little Ice Age’, and the discrimination and persecution that the Gun Merchant faces because of his identity is mirrored in the racism that migrants and refugees from the Global South now face at an unprecedented scale. As writer and editor Aditya Mani Jha points out, the very naming of him as the gun merchant evokes the racist idea that immigrants bring violence and crime with them to the pristine neighbourhoods of the Global North.

A snake attack in the US recalls a previous one in the Sunderbans. Worms in Venice bring to mind worms in the Sunderbans. A Bengali man in an Italian city meets a Bengali woman from the same district in Bangladesh that his family had to leave for Calcutta. At a certain point almost everything significant in the story finds echoes in something that has already happened – and in this way, in Ghosh’s story, the past is a foretelling. 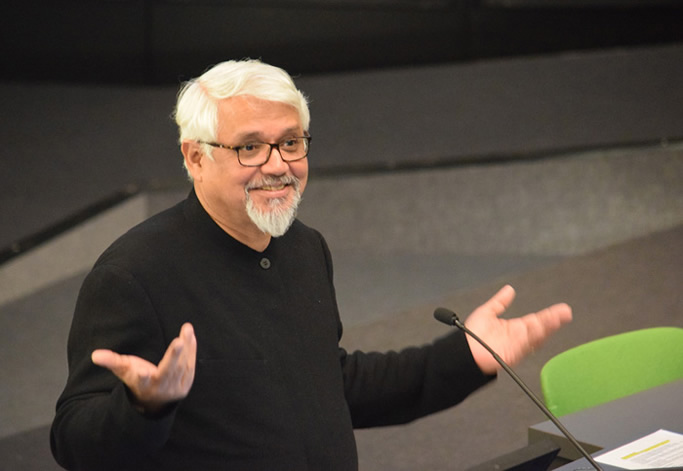 Ghosh will likely take grave objection to a response to his novel as a work of speculative fiction. He says as much in an interview with The National, “It is about the real world, the reality of my life and many other people spread out across the planet; it’s not speculative.”

One doesn’t disagree with him, but one does wonder why a speculative novel could not equally be about very real things, as so many of the most impactful genre stories have been over generations. Perhaps he’s just keeping himself at a safe distance from exoticising, ultimately dismissive readings such as this ludicrous review, which calls the book “the Bengali Da Vinci code” in the style of casually orientalist readings of anything that is produced by someone who is not white.

Also read | Why We Do Not Hear the Waters: Amitav Ghosh’s ‘Great Derangement’

Many of the events in the novel that seem magical are dismissed and explained away by its more ‘rational’ minded characters almost immediately (though many are not). A seemingly miraculous ecological event that happens in a climactic scene towards the end of the book theoretically has logical explanation, as Piya hurriedly explains to Deen, who is finally worn down into being wonderstruck with what is happening to and around him. The hauntings in this book, too, could simply have emotional or talismanic (as in the case of Cinta’s lost daughter) value to the characters they are happening to.

In the end, Ghosh seems not to reject the rational for the mysterious, but simply put them both on a spectrum of emotional experience. And it is via this emotional self-awareness, this open-mindedness that his protagonist begins to approach the world, and its very real and present problems. This is the mental journey that a privileged NRI bhadralok man like Deen, with his particular background and history, is not equipped to make. In the end, the lesson he seems to learn is deceptively simple – in this vast and unknowable world that is being torn apart by human systems, this vulnerability matters, and fuels what we ultimately do with what we have to face in front of us.

The story has its problems, including its flaws in pacing, or its preoccupation with the inner life of its principal character to the neglect of many of its other compelling people, particularly the women (especially Cinta, who feels woefully underused and whose perspective could liven up a novel like this immensely). Even so, this is in some ways Ghosh’s most tender, even most personal novel yet – while simultaneously being global in scope. It is a story full of that particular grace.