Book Extract | A Homage to Shantiniketan Ashram and Its Legendary Gurus 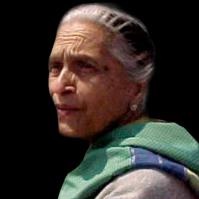 Gurudev was very fond of outdoor celebrations. A full moon, especially in spring, when the Ashram was awash with a silvery light, was like a personal invitation from Mother Nature to us Ashramites. A notice would come round that we should all assemble at a particular spot in the Ashram that night. And lo and behold, all of us would bolt down an early dinner and head there to see what new treat awaited us. Among the assembly would be our maid, Khudu, and the kitchen boy, Nagendra, his dark, lithe body almost gleaming in that light.

All the students—whether they were in Kala Bhavan, Shiksha Bhavan or Sangeet Bhavan—would saunter in one by one and you could say we resembled a marriage procession coming together. Someone would start a lovely song (‘Phaguner Purnima/Elo kar lipi haathe . . . [Who has this Spring moon come to invite?]’). Singing lustily, we’d make a lazy circle of the Ashram and head towards Uttarayan, where Gurudev would be waiting for us. What better way to greet our Guru than sing him his own composition? The audience would invariably have the Ashram’s most devoted culture-vulture: our dear Sarju Maharaj. I must digress here to remember this extraordinary connoisseur of the arts. The Ashram had students from all corners of India and some were often homesick for food from their own region. This is why the Ashram started to employ cooks brought along by some of the students. For instance, Lakshmi Kanthamma Reddy, from Nellore in Andhra Pradesh, had brought their family retainer, Chellum, who made mouth-watering idlis, dosas, rasam-sambar, upma and other such delicacies. Naturally, this started an avalanche of other culinary experts: we now had a Gujarati cook, a Sinhalese cook, and even a Chinese cook. Only us poor students from north India had no one to cook us our favourite food, because no cook from Uttar Pradesh would agree to come so far away from home.

This is how Sarju Maharaj, from Chhapra in Bihar, arrived to take care of us and dish out the arhar dal and baigan ka bharta that we longed to eat. However, it soon became evident that his heart lay elsewhere—he was a musician and since even the leaves of the Ashram were steeped in music, he felt that he was in the best workplace God had created. There were rehearsals almost every day somewhere in the Ashram. The minute Sarju Maharaj got wind of any rehearsal, he would quickly finish cooking (often dinner was ready by five in the evening!) and take off. He knew the words of every song composed by Gurudev but gave them his own unique touch by adding ‘He Rama’ at certain intervals he deemed fit.

Thus, one of Gurudev’s most famous Varshamangal songs (‘Pagla hawa, badal dine, pagal amaar man jeyge uthe’) became something else after that special Sarju Maharaj touch. ‘Pagla hawa, He Rama, Badal dine pagal amaar man jeyge uthe, He Rama . . .’ he sang lustily. Sarju came religiously to every rehearsal, his head covered with his signature red gamchha, ready to sing along. Whether it was Chitrangada, Chandalika, Mayar Khela or Tasher Desh, Gurudev would personally direct their rehearsals. The polished red floor of the stage would reverberate with the tinkle of ankle bells as the dancers glided across it.

Guru Kelu Nambiar would be instructed by Gurudev on the expressive context of the song to inspire him to choreograph a suitable piece. Those of us who have seen his choreography of ‘jol daao, more jal daao . . . [Water! Give me a drink of water . . .]’ with Tagore’s granddaughter, Nandita Kriplani, perfectly enacting the whole sequence of drawing water out of a well and pouring it into the cupped hands of the thirsty traveller, will never forget it. Nandita di, whom we all knew by her pet name, Burhi di, was a special friend.

I can still see before my eyes her face as it was then: fair, with large eyes and a lovely gurgle of laughter. She stayed with her grandfather in the ‘Thakurbadi’ and took part in virtually every dance drama that Gurudev composed. I once accompanied her and Gurudev to Almora and stayed a few days in the huge Tagore mansion, ‘Jorasanko’. When I saw them together, I realized how Tagore doted on this special granddaughter.

Let me briefly recount that memorable trip to Almora with Gurudev, preparations for which were no less complex than the viceroy’s annual transfer of capital. Accompanying Gurudev was Burhi di’s mother, Meera di, and his secretary, Annada Babu. Till late in the night, Burhi di packed his woollen gowns, books, paints, brushes and all the other paraphernalia that a writer and artist would need in the hills. Meanwhile, she also took me on a conducted tour of that huge palace. I still remember those spiral cast-iron staircases and endless rooms. Then, we sat in the long veranda and she sang a beautiful song for me. That song was inspired by the pahari folk tune Gurudev had once heard in Ramgarh and been haunted by:

I see her lovely face as clearly now as all those years ago: her carelessly tied sari, one end thrown over a shoulder in the Bengali style, and long gold earrings swinging as she sang on. Who could have ever guessed that that lovely young face would be ravaged one day by cancer? Her husband, Krishna Kripalani, was the secretary of the Sahitya Akademi in Delhi, and they had moved out of their lovely home in Calcutta, where we had spent many fun-filled evenings. I happened to be in Delhi when I heard that Burhi di was battling cancer, but when I went to see her at the hospital, I had to return disappointed. They would not allow visitors to see patients outside of visiting hours, and no matter how hard I pleaded, they refused to relax that rule. I came away recalling Gurudev’s immortal lines:

[You went away after coming to my door. Had you but touched it, my door would have let you in . . .]

I wrote her a letter when I reached Nainital and she immediately answered it:

I was so upset to hear that you were not allowed in even though you had come from so far to see me that day. You have mentioned that you are writing a book on our Ashram. Don’t forget to send me a copy when you publish it.

I have completed the book, Burhi di, but even if I want to, I cannot send it to the address where you have gone now. Nandita di, Mamata Bhattacharya, Hansu, Anita Baruah, Vanleela Bhatt, Stree—these dancers were groomed personally by Gurudev. Once when Gurudev was being honoured by some society in Cuttack, a thin, emaciated girl sang a song composed in honour of his visit. So struck was he by her voice that he immediately wanted to know who she was. He was told that she belonged to a poor family. They found it hard to even provide a bellyful of food to their children, so where was the money for music lessons?

Gurudev promised that he would nurture her talent and called her to his Ashram, where she was admitted to Sangeet Bhavan. Another indigent student, Kalu, was blind but what a voice he had! Gurudev took him in as well. Every other week, students would organize a literary evening, and everyone wanted Gurudev to preside over it. So it was decided that every bhavan (school) would be given time for a literary evening each month. If he was unable to attend it personally, he would send across a bouquet of roses from his garden and promise to make it up the next time.

Gaura Pant ‘Shivani’ (1923-2003) has authored several short stories, novels, newspaper columns, travelogues and a three-part autobiography. Her literary output spans some forty works and she was awarded the Padma Shri in 1982.