Interview: 'In an Increasingly Confrontational World, We Need Some Happiness and That's What My Books Provide.' 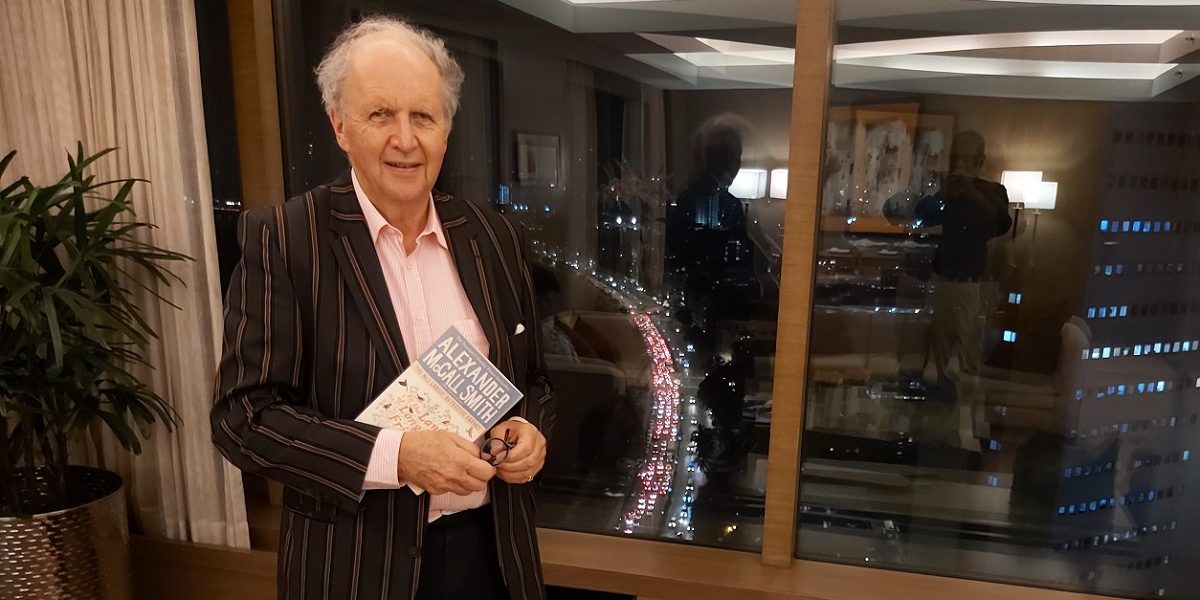 Crime fiction is populated by detectives who are either clinical and scientific (Sherlock Holmes), hard-boiled tough guys (Philip Marlowe), fastidious and meticulous (Hercule Poirot) or angst-ridden (the Scandinavians). Into this world, in 1998, crept in, almost unnoticed, a ‘traditionally built’ Precious Ramotswe, founder and proprietor of the No 1 Ladies Detective Agency in Botswana.

Mma Ramotswe, as she is called in formal Botswanan style, is confronted with crimes that are mundane compared to the gruesome murders that the others are called upon to investigate. No severed heads or bullet-ridden bodies (though, in one case, a victim is eaten by a crocodile). Nor is she quick to jump to deductions based on a cigarette butt or a bloody footprint. She goes about her work talking to people and then, in asides that can go on for a few paragraphs, ruminating about human nature and the ever changing world around her. She is a comforting presence, someone who believes in the goodness of people and in forgiveness.

The creator of Precious Ramotswe, Alexander McCall Smith, a professor of medical ethics in Edinburgh who had grown up in Rhodesia (now Zimbabwe), had already written nearly 30 books, many of them for children, when he published the first of the No 1 Ladies Detective Agency novels. After a slow start, the books became a huge success all over the world and the series has sold millions of copies, including in India. Some of them are, The Limpopo Academy of Private Detection, Teatime for the Traditionally Built, The Minor Adjustment Beauty Salon and the latest, In the Land of the Long Lost Friends. Ramotswe is a composite of many Botswana women but the thought was triggered in the author’s head when he saw one writing the neck of a chicken just before a lunch.He got intrigued at her possible story and that set off a chain of thought.

A prolific writer – he has written nearly 100 books, including one on the law and medical ethics – he has also created other characters such as the Edinburgh philosopher detective Isobel Dalhousie and the Swedish investigator Inspector Varg, who is the antithesis of his other Scandinavian fictional counterparts. But Mma Ramotswe and her Agency are the best known.

McCall Smith writes every day (“not 5,000 words anymore, just around 3,000”) and travels incessantly, promoting his books and giving lectures. In Mumbai for the Tata Litlive festival, he took time off to speak to The Wire about his best-known character and the one writer whose style influenced him the most.

How did Precious Ramotswe and her No 1 Ladies Detective Agency emerge?

I had written nearly 30 books already, many of them for children. In 1981, I had gone to Botswana to help set up the law school for a university there. I got to the country, the culture—it’s a very gentle place, people have an elaborate way of greeting each other, asking about each other’s health etc. Also, it is very well run, more so when compared to many other places in the region. After that, I went there every year. In 1998, I wrote a short story based in Botswana and developed it into a novel. A small publisher in Scotland brought it out, just a handful of copies, around 1,500. A second book followed, and a third, a fourth. All had modest print runs.

Columbia University Press, with which this Scottish publisher had a connection, added the books to its trade catalogue. The demand increased somewhat, and the publisher was quite surprised to constantly receive orders for 500 or 1,000 additional copies almost constantly. It was quite organic, really.Then the New York Times did a full page on the books and I was flooded with calls from American publishers. Finally, I went to New York to meet Random House and expected to meet an editor or two and be done with it. But they took me around, introduced me to all kinds of people, and had booked an entire restaurant for a lunch. At the end of the lunch, at 4:30 pm, when I stepped out, I knew my life had changed, I would have to turn a fulltime writer.

A collage of some of the books in The No 1 Detective Agency Series.

How did they pitch your book, in what genre? It does not really fall under the regular definition of crime fiction.

That’s an interesting question. Crime fiction, or mystery fiction, as it is called in the US is a well-defined category, in which these novels don’t really fall. In my books, there is no real crime, as such. Mma Ramotswe is less a detective more an Agony Aunt. The traditional southern African society is more about social harmony rather than punishment, more about forgiveness than retribution. So it didn’t really go in that segment – I suppose it does not really fit into genres. I find genres artificial – I mean what is ‘literary fiction’? It is now books that nobody wants to read (laughs). All books are literary. For me, the detective agency was a device to allow the protagonist to deal with very human problems, in an affirmative kind of way.

Who were your influences in writing this?

I had many, but my biggest influence was R.K. Narayan. His books talk about the characters in a small town, their interactions and their daily rhythms. I had read him and thought, ‘Yes, this is what I want.’ I really admire him, have written the introduction to a new edition of his books. I met his family in Chennai too.

That has been one of the critical observations about your book, that they are too optimistic, even cheerful, though there have been dark moments occasionally. Mma Ramotswe has faith in people. Even Inspector Varg of Sweden is not like other Swedish detectives.

Well, Varg does suffer from depression, like they all do. I turned the idea of a Swedish detective on its head. But yes, my books are affirmative. But why should that be a criticism? Who says every book has to be dark or full of problems? In this world, getting increasingly confrontational, we need some happiness, some cheerfulness. That’s what readers find in my books, a sense of calmness, of a world where they can find some solace. My stories are set in a time before mobile phones, the internet and all that. People find comfort in that.

I get a lot of mail, and I take all of it very seriously: a reader wrote she was almost suicidal and these books really helped her. I found it very moving.

But sometimes the stories meander, as Mma Ramotswe muses on life and for a reader of detective novels, who wants action and crime, it can slow down things.

That is what readers like about my books. Mma Ramotswe musing on life and on people. There was some criticism that I had painted too sweet a picture of Botswana and not written about its problems, say AIDS. I did think about it and consulted some friends and they said, Botswana is seen by the world as a country beset with AIDS. Let’s have a book by a western writer that does not mention AIDS. It may be anachronistic, but why should every book mention these issues – it’s like telling a composer he can only compose a certain kind of tune and it should only be a dirge in a minor key.

The rhythm and cadence of the way the characters speak, is that authentic or made up? For instance, often the same phrase is repeated while making a point. Or Mma Ramotswe calls her husband Mr J.L.B. Matekoni each time, to him directly and while referring to him.

The Matekoni bit is my exaggeration. But people in Botswana speak in a particular way, and I have tried to capture that. English is not their mother tongue – they learn it in their schools, still learn correct grammar and African English sounds really lovely. It is almost Biblical. They are also extremely polite, which you will notice.

I am most disappointed at the falling standard of English in the UK. People don’t learn it or speak it correctly. The use of ‘like’ for example – I overheard some talking the other day and every second word was ‘like’; it is annoying. 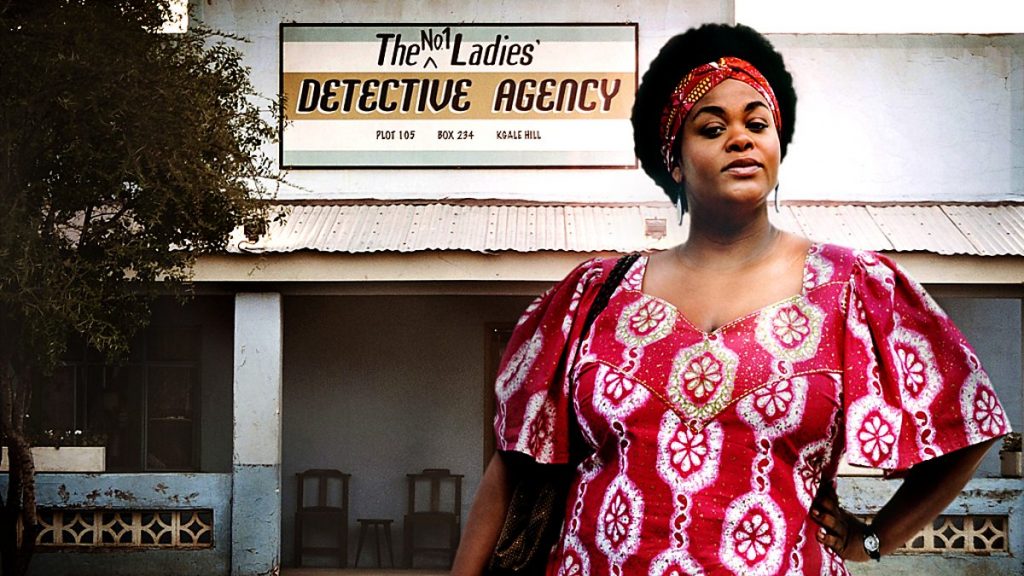 Jill Scott as Mma Ramotswe in a television adaption of the novels. Photo: BBC/HBO

What kind of reception did your books get in Botswana? We hear nowadays about stereotyping, cultural appropriation, white man’s gaze and so on.

The reception has been very generous. People there were happy at the positive portrayal of their country. Of course, there was criticism – some people also said it was all too sunny, the problems were not mentioned, but as I mentioned, why should one focus only on the problems?

I also feel it is unfair to say that writers can only write about their own world. They should be allowed to write on anything they want, as long as they do it sensitively and knowledgeably. Shakespeare wasn’t Danish, but he did write about the Prince of Denmark.

What next? You write a lot, so there must be a book in the works.

Yes, there is a book called Tiny Tales with very, very short stories. And of course, Mma Ramotswe will go on.