A Lesson in Tolerance for Smriti Irani from 19th Century India

Tarabai Shinde took far more liberty with Hinduism in her 1882 book than the students the Union HRD minister considers 'seditious'. 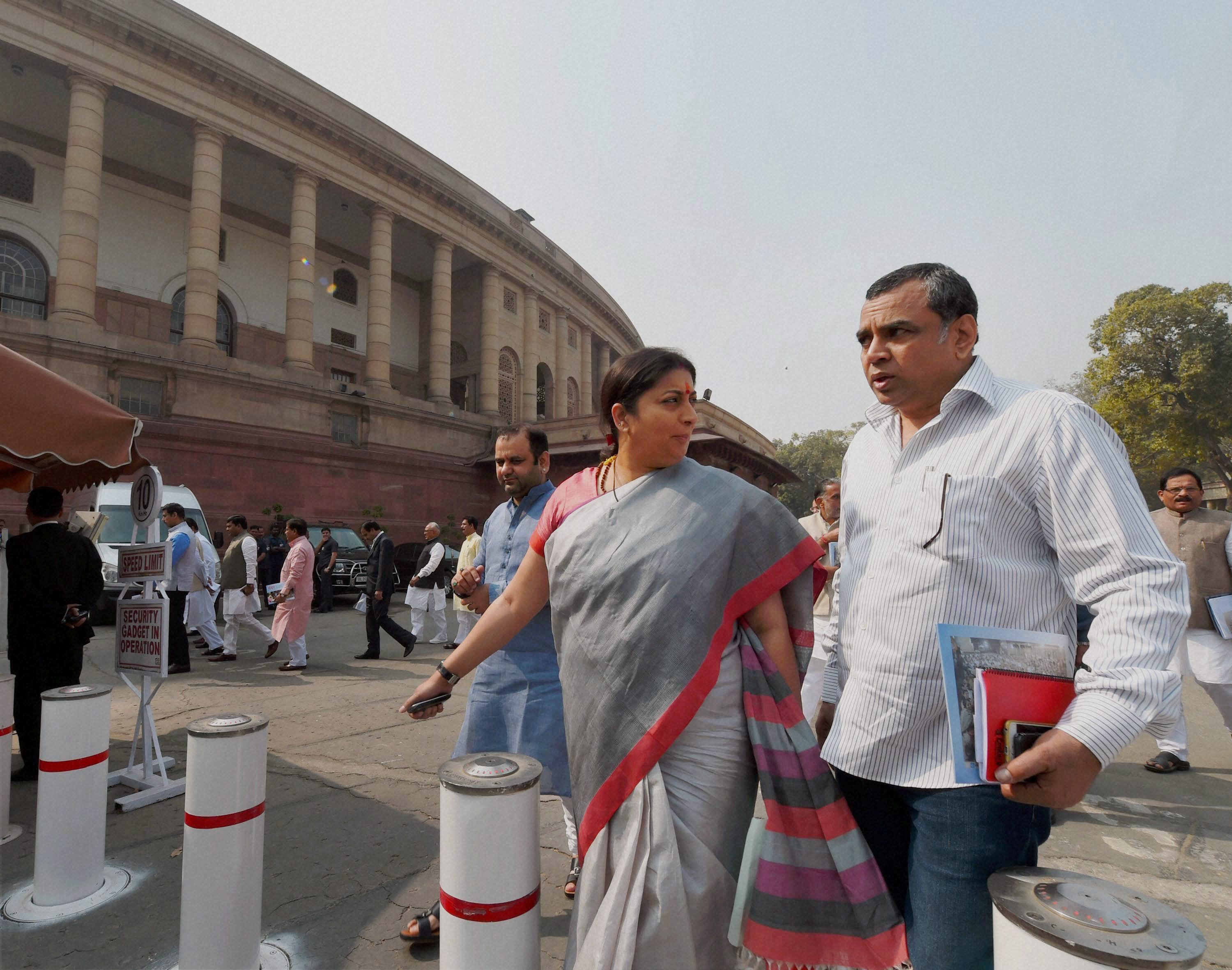 HRD minister Smriti Irani’s recent show of angst against those celebrating ‘Mahishasura Martyrdom Day’ is symptomatic of a larger malaise afflicting Indian society – the shrinking space for constructive debate and conversation in the public arena. There may be lessons for her – and all of us – from a 19th century woman writer, Tarabai Shinde.

In 1882, Shinde, a woman from Buldhana, in Varhad province, current-day eastern Maharashtra, authored a slim book in Marathi called Stri Purush Tulna [Translated excerpts: PDF]. Written in essay format, the central focus of the book is to answer the question, as the subtitle of its English translation suggests – “Who is really wicked and immoral – women or men?”

Stri Purush Tulna was published by Shri Shivaji Press, and priced at 9 annas. In 1994, Rosalind O’Hanlon re-translated the essay from Marathi to English and published it with Oxford University Press as A Comparison Between Women and Men.

Discussing the 52-page book in a class with only American students in a liberal arts college in Tennessee, I felt a certain degree of unease explaining that perhaps Shinde was lucky to have been writing in colonial India more than 100 years ago. If found critiquing Rama and making fun of the Hindu shastras today, I imagine that she would have received death threats by now. Her attacks against traditional Hindu customs would very likely be construed as anti-national, since it has become so common to use the terms ‘India’ and ‘Hindu nation’ interchangeably, notwithstanding the fact that India is constitutionally a secular country.

Space for dissent, then and now

Shinde did not have to worry, in her day, about the many restraints on free speech that exist in India today and have existed since independence. Of course, sedition against the British government was not taken lightly at the time that she was writing. But one could speak more freely on matters of religion, especially from within the community, than one can today.

Tarabai’s father, Hari Shinde was one of the earlier members of Jyotirao Phule’s Satyashodhak Samaj. Phule’s tireless agitation targeted caste oppression and untouchability. He was also an educator and with his wife Savitribai Phule played a critical role in advocating women’s education and widow remarriage.

Phule was a close family friend of the Shindes. Hari Shinde must have also believed in the betterment of non-Brahmins peasants and condemned caste hierarchy. It was very possibly his reformist commitments that played a role in the young Tarabai, his only daughter, receiving an education. When Tarabai married, her husband, as gharjamai,moved in with Shinde’s family. The couple had no children, and when her husband died, Tarabai did not re-marry.

Given this background and milieu, it is not hard to imagine that Shinde would feel the need to write in defence of women. Male reformers had already been campaigning for women’s education and rights for more than half a century by the time Shinde was writing her book.

What is noteworthy about this priceless 19th century text is the language of trenchant criticism employed by Shinde to critique not just men but sacred Hindu texts.

She writes: “But in fact, the people who wrote all these books ought to be ashamed of themselves, shastras, puranas, ponthis and so on.”

She goes on to suggest, “Take Draupadi – she was a woman who had five husbands already, but that never stopped her from lusting after maharaja Kama, did it?” Playing with the conventional narrative of the Ramayana, Shinde muses, “Now, when that lad Ravana carried off the lady Sita he soon thought he had made a mistake. He got really besotted with her, sighing and groaning and all the rest. But if today’s laws had been operating, the whole matter would have been settled quite simply. Ravana would have handed over a few hundred thousand rupees to Rama towards his marriage expenses.”

Shinde puts the gods on trial. From discussing their pre-marital sexual activities, to children born to unmarried goddesses, to secret love marriages and second marriages, she writes without fear and restraint.

She presents this body of “evidence” to us to answer the rhetorical question with which she starts her book:

“So is it true that only women’s bodies are home to all kinds of wicked vices?”

Shinde’s book received its fair share of criticism. But there was no charge of sedition from the British government or accusation of anti-nationalism against her from conservative Maratha men, who constituted the readership she had wanted to target, according to a reference made by Phule the same year. Phule must have liked what he read because he called the Maratha newspaper editor who ridiculed the book “stupid.” The book became important with many, in fact, for its “hotly stated” facts.

Arguments and discussions are healthy. Even a cursory glance at India’s social reform history reveals the evidence that India was better off for the range of public debate that took place in the 19th century. Shinde supported widow remarriage in her book. Vidyasagar and Ram Mohan Roy had done so before her. Importantly, neither they nor their opponents were deprived of dialogue in the name of religion or patriotism.

The attack on plurality

What I see today in India is growing antipathy towards tolerance and a rise in parochialism. There is complete disengagement with the idea of a healthy debate, public space for which is shrinking by the day.

A poignant instance is HRD Minister Smriti Irani’s recent parliamentary speech in which she irresponsibly cited the comments made by “Communist leaders” about the goddess Durga as a “sex worker.” Her speech was irresponsible because a government minister ought to know better about how such quotes and statements can cause riots and claim lives. But, perhaps more importantly, her speech was irresponsible in imposing a single narrative of Durga as good and Mahishasura as evil – so evil that a Mahishasura martyrdom day is un-Indian and unthinkable – in complete neglect of the many strands of the Durga-Mahishasura mythology that have existed in various parts of India.

Irani also seems to believe that giving a positive spin to Mahishasura might not go down well with people on the streets of Kolkata.

Well, I grew up in an old, ancestral house in north Kolkata where Durga Puja has been performed in our own natmandir for more than 75 years, and I have never known Mahisasura to be an evil figure. As a child I have garlanded both Durga and Mahishasura. People of Kolkata get the essence of the Durga-Mahishasura story – beyond the binary of good and evil – more than Irani has given us credit for.

In a society were Sita is worshipped for her chastity and purity, Shinde dared to suggest that she could be bought over by Ravana for a few hundred thousand rupees. In 1882, Shinde added to the plurality of a discussion on the Indian epics and revered deities. In 2016, politicians and ministers such as Irani are challenging that very plurality that is India’s abiding strength. This is terrifying because a nation benefits and progresses from the existence and thriving of different voices.

This fear of growing intolerance in India does not pertain to just a particular government or a political party, but also to millions of Indians who clash with each other on the internet, on Facebook and Twitter, and on the streets. These debates are seldom aimed at finding even a modicum of truth in each other’s positions. They instead become nonsensical tirades and idiotic fights.

There is institutional support for this rising intolerance from many political parties and organisations. The RSS is an interesting example. While as an organisation it acts as a vanguard of “Hindu and Bhartiya sankriti,” it also cleverly reveres Phule as one of its heroes. But if Shinde had published her book today, the RSS, in line with its brand of politics, would be the first to violently protest it, brushing away the fact that Phule stood by Shinde in the 1880s. The problem is not so much with the RSS’s political position as it is with their fundamental belief that they are the authority that can write down a single narrative of India’s Hindu past and present. The dangers of a single story are many, especially for a diverse country like India.

While Shinde’s background may have led her to write this book, it is important to note that because reforms for women in the 19th century, mostly advocated by men, placed new restraints on women, she was forced to live only within the privacy of her home. Writing her book, therefore, needed courage. But even in the era of such conservative feminism, Shinde was able to successfully publish Stri Purush Tulna and have Phule stand by it. The criticisms her book received were perhaps enough to deter her from writing again. But she wrote with the conviction that she could criticise Hinduism and patriarchy – that is obvious in her rhetoric. Few authors can feel so optimistic today. The British are long gone, but the Indian government’s fear of sedition has only become deeper – so much so that any critique of the government (and of a minister’s view of religion and mythology) is conflated with ‘sedition’.