The three year-long CBI investigation into Jatin Mehta's Winsome Diamonds has finally come to an end. While there are a number of questions still remaining, will the guilty be punished? 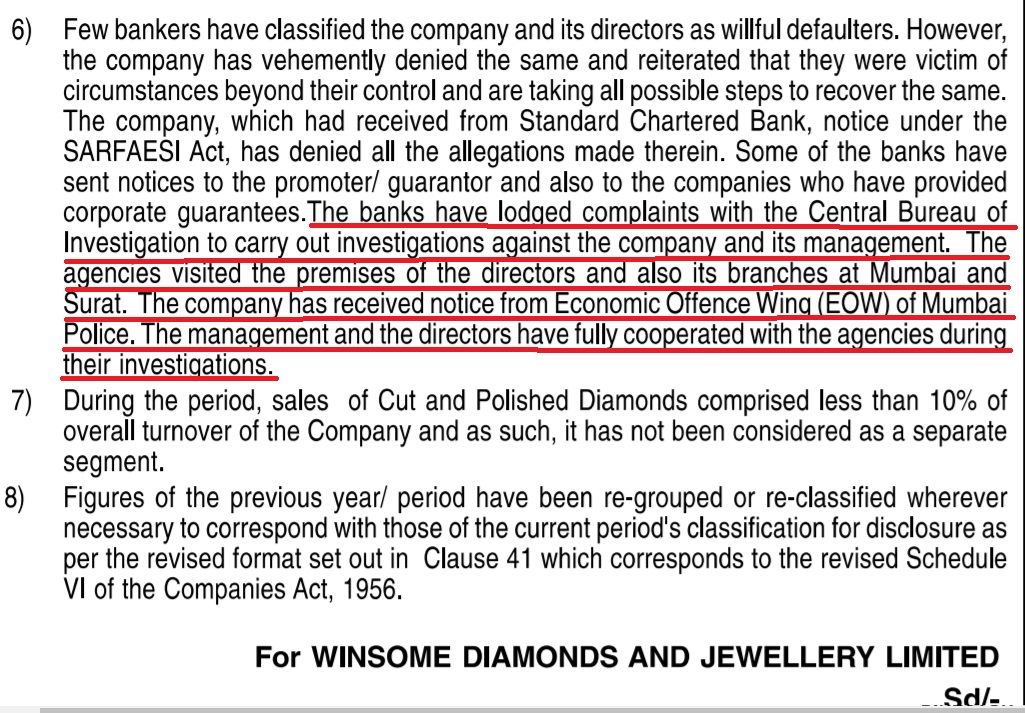 span style=”font-weight: 400;”>In its financial statement for the period ending March 31, 2014, the company also stated that it had received a notice from the Mumbai police’s economic offence wing and that its “management and directors” had “fully cooperated with the agencies during their investigations.”

Initial reports often suggest that investigative authorities plunge into action within days after they received formal complaints from banks. But the long gestation of this case suggests that it may have been sidelined after the change of power in New Delhi in 2014. For the past three years, the CBI has investigated without producing any FIRs or arrests – which is curious because it was suspected as early as August, 2014 that there may have been more than a hint of fraud.

While the mainstream media spotlight often falls on Vijay Mallya, there has been conspicuously less attention devoted to Winsome Group promoter Jatin Mehta, who, going by some estimates, may be the biggest defaulter in Indian corporate history.

Back to the beginning

The credit was given to three group companies: Rs 4,366 crore to Winsome Diamond & Jewellers, Rs 1,932 crore to Forever Precious Diamond and Jewellery and Rs 283 crore to Suraj Diamonds.

According to the Economic Times, Indian banks had issued standby letters of credit (SBLC in banking parlance) similar to guarantees in favour of international bullion banks like Standard of South Africa, Standard Chartered London and Scotiabank, which were supplying gold to Winsome Group. As the Economic Times points out, “the arrangement was simple: if Winsome failed to pay the bullion banks, Indian banks would step in to pay for the gold consignment”.

As all the loans were grounded, within months Jatin Mehta resigned from the company as director.  Mehta first resigned from Forever Precious Diamond and Jewellery on August 13, 2012 and from Winsome Diamonds and Jewellery, the flagship company, on November 9, 2012.

Mehta claims that the company had failed to pay because Winsome’s customers – UAE jewellers – were hit by derivatives losses and were unable to pay Winsome. In turn, Winsome Diamonds failed to repay the loans to various Indian banks.

From mid-2013, the group started defaulting on loans, and in October that year, banks declared the group a willful defaulter.

In early 2014, the banks knocked on the door of CBI. Both the CBI and the Economic Offence Wing (EOW) of Mumbai police raided Winsome’s offices. According to multiple sources within Indian banking circles, after this point the investigation slowed down. This coincided, multiple senior banking officials say, with the change in government in 2014.

Raghuram Rajan, then RBI chief, sensing the mounting pressure of NPAs on banks and the role of the powerful people from the real estate and diamond sectors decided to take the matter to the prime minister’s office (PMO). In the first half of 2015, he wrote to the PMO seeking “concerted” action in this regard.

The Hindustan Times, quoting sources, noted that Rajan pegged the value of the scams at about Rs 17,500 crore. In the letter, he also outlined the reasons cited by banks for delays in their investigation and the status of the cases as obtained from the CBI.

Rajan also later confirmed that PMO was pursuing  big default cases. While speaking at a seminar on the topic of ‘Resolving Stress in the Banking System’, in June 2015, the former RBI chief said:

For fraudsters, quick and effective investigation by the investigative agencies is extremely important. We should send the message that no one can get away, and I am glad that the Prime Minister’s Office is pushing prosecution of large frauds.

Rajan also added, in an warning:

And for those who have diverted money out of their companies, especially into highly visible assets abroad, a stern message sent by bankers sitting together with investigative agencies should help send the message that the alternatives to repayment can be harsh.

The Supreme Court also believed that the NPA issue was a matter of serious concern. While hearing a petition on NPAs in 2016, the-then chief justice T.S. Thakur and justice R. Banumathi said that the court will examine if the total amount of defaulting loans running into crores of rupees can be disclosed. On April 12, 2016, they came down in favour of public disclosure of defaulting loans that ran into thousands of crores.

A few months after the court’s decision, news broke that Jatin Mehta had become a citizen of St. Kitts and Nevis. Located in the Carribean, St Kitts and Nevis is widely known to be a tax haven. More crucially, India does not have an extradition with the country and analysts point that out that it will be nearly impossible, if it is required, for the Indian authorities to bring Mehta to book.

Doing business in the UK

As per the records of Companies House, the registrar information companies for UK, Jatin Rajinikanth Mehta is a citizen of Saint Kitts and Nevis in the Caribbean. He now owns a company called Diamond Distribution Company (UK) Limited that was incorporated August 1, 2016. Mehta has listed his residential address as 1 Bell Street, 2nd Floor, London, England, NW1 5BY.

In sharp contrast to Vijay Mallya, Indian banks are left with almost nothing with which they can recover their loans Mehta. The Times of India reported in August 2014, that the banks were left with nothing. Journalist Josy Joseph noted that “the collateral security provided by Winsome is worth just about Rs 250 crore”.

“…Jatin Mehta may not have many assets in India. He used to take commercial spaces on rent, and operated through his trusted staff and managers. Investigators have so far been able to track down just one property owned by his family members, a flat in his mother Gunvantiben Mehta’s name in Malabar Hill in Mumbai,” the newspaper report said.

Where is the money?

On April  5, 2017, the CBI  registered six separate cases against Winsome Diamonds and Jewellery Limited, and Forever Precious Jewellery and Diamonds Limited, and their chief promoter Jatin Mehta for allegedly cheating three government banks to the tune of Rs. 1,530 crore.

CBI spokesperson R.K. Gaur said that it was alleged that Central Bank of India suffered losses of Rs 699.54 crore from Winsome and Rs 255.24 crore from Forever. IDBI and Vijaya Bank suffered loss of Rs 133.12 crore and Rs 55.68 crore on the account of Winsome and Forever respectively.

It is suspected that all of the company’s 13 UAE-based  buyers were in connivance with Mehta and that they have siphoned off the funds.

Times of India raised doubts about this deal in 2014. The report also narrated how the money was allegedly siphoned off:

Winsome has 13 distributors in the Middle East, of which 12 are controlled by one  Haitham Sulaiman Abu Obaida. He owns Italian Gold FZE, and has the power of attorney on behalf of the other distributors.’ According to documents with TOI, it is now clear that Obaida also controlled some of the suppliers of Winsome, and fully owns at least one of them, Al Noora FZE, a key supplier of Winsome. Raising questions about the so-called distribution network of Winsome, documents show that 10 of its distributors were incorporated only in 2012, five on the same day, June 25, 2012.

It isn’t clear who Mehta is, but Al Alam Jewellery is fully owned by Herald International, which is based in the Bahamas, a tax haven.

Diamond trade expert Chaim Even-Zohar, who runs Diamond Intelligence Briefs, alleged in 2016 that the money had been laundered to US-based company Pure Grown Diamonds and IIa Technologies of Singapore and Malaysia.

The synthetic diamonds that have were produced by IIa Technologies of Singapore and Malaysia, and sold by its US marketing arm, Pure Grown Diamonds, could be declared as the fruits of money laundering,  according to Zohar’s investigative report.

Even-Zohar reports that at least three of Mehta’s UAE-based suppliers were listed on the block global insurance policy of Su Raj Diamonds (later called Winsome) and then were  taken off the block insurance policy shortly before they defaulted on the amount owed to Winsome/Forever. These revelations point towards the conclusion that the UAE companies were set up with the express purpose of siphoning off the money taken from the banks.

Even-Zohar’s report also revealed that most of these UAE companies were, in fact, one-room fronts that did not have the required staff or facilities to store diamonds and jewelry. It appears no actual diamonds or jewellery were bought by them though amounts in hundreds of millions of dollars were accounted for in transactions with Winsome. Most tellingly, all the UAE companies were owned by one Haytham Ali Salman Abu Obidah, who Even-Zohar’s report says, has worked for Winsome for the past eight or nine years.

Winsome was incorporated in 1985 as Su-Raj Diamond India Limited, apparently named after Mehta’s son, who is now Vinod Adani’s son-in-law. Within months after the marriage, Mehta resigned from Winsome Diamonds.

Indian media flashed the news that Mehta had given up his Indian citizenship on June 2, 2016. Just two days before that, however, on May 31, the Enforcement Directorate had issued orders for provisional attachment of immovable assets, plant and machinery worth Rs 171.97 crore belonging to Winsome Diamonds and Jewellery Limited, its promoter Mehta and other group companies.

The outstanding loan of Winsome Diamonds group has already crossed nearly Rs 7,000 crore, according to sources within banking circles. With the CBI finally filing cases, it appears that the investigations has started to come to an end. But will the guilty be punished?

Note: On May 11, The Wire received a legal notice from Salil M. Thakore on behalf of Winsome Diamond and Jewellery. The notice directed to our attention to a number of legal suits filed by Winsome against the UAE entities mentioned in the story. In April 2016, the company informed the Bombay Stock Exchange that it had won a number of cases against its large defaulters in the UAE. The company said that a Sharjah Court had “dismissed the petition of Al Razin Jewellery FZE and Al Faheem Jewellery FZE and ordered them to pay USD 27.23 million or its dirham equivalent with 5 per cent interest to the appellant (Winsome)”.

In addition to this, the company has also pointed out that allegations of money being siphoned off are “absolutely false and have no basis” and is “evident from the fact that in the banks’ case itself filed at DRT, Ahmedabad…. the banks have specifically stated that the goods have been sold supplied and delivered by the companies to its customers at UAE and the customers in turn have defaulted by not making payments.