In Defence of the FRDI Bill: The Many Misconceptions and Facts

Despite the fears of the public over the 'bail-in' clause, the FRDI Bill is an impending necessity in the context of global financial reform. 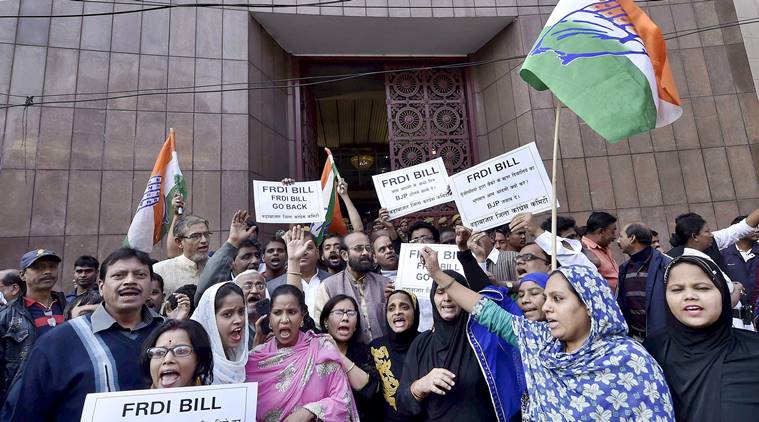 To suggest that the proposed law gives a free run to financial regulators at the expense of public interest is largely misguided. Credit: PTI/Ashok Bhaumik

Over the past few weeks, much unrest has transpired in the public sphere regarding the proposed Financial Resolution and Deposit Insurance (FRDI) Bill 2017, especially with respect to the now infamous ‘bail-in’ clause found therein.

While it is true that fears concerning the safety and sanctity of regular deposit accounts and other creditor claims are not entirely unfounded, amidst the furore and skepticism which has swayed public opinion in the last days, the real significance and potential of the FRDI Bill has become somewhat indiscernible.

To put it bluntly, the present Bill is not only an appropriate response to accumulated wisdom characterising financial booms and busts, but is also an impending necessity in the context of global financial reform. Arguably, the Bill, as it stands, can certainly be tweaked into making explicit safeguards which are already implicit in the Bill. One can only hope that the standing committee would rigorously look into those.

However, to suggest that the proposed law gives a free run to financial regulators in their quest to ensure an orderly bank resolution at the expense of public interest is largely misguided.

The failure of a bank is no ordinary event. The bigger and more inter-connected the entity, the worse and prolonged are its disruptive effects. Through contagion, instability in one bank can ultimately culminate into a full-blown financial crisis leading to years of recession, unemployment and unsustainable fiscal costs.

Accordingly, banks represent the linchpin of an economy and that explains why regulators need to treat banks differently from ordinary corporate firms, particularly with regard to bankruptcy and liquidation. The global financial crisis was the turning point in terms of a remarkably different approach towards bank failures and resolutions, characterised by separate resolution regimes for banks and other financial institutions, re-think on use of public funds to restructure or resuscitate failing banks and the need for a separate set of authorities to effectuate resolution procedures.

Several economies including the United States and European Union have significantly amended their resolution regimes to allow for more orderly resolutions, while being equally mindful of the public interest at large and the propriety of publicly funded ‘bail-outs’.

In this regard, and in line with global best practices, it is laudable that the FRDI Bill creates an overarching framework for resolving ‘financial service providers’, stipulates a tool-box of several resolution mechanisms, mandates a new entity, the ‘resolution corporation’ to effectuate an orderly resolution process and provides for several safeguards to effectuate such bank resolutions. ‘Public interest’ and ‘protection of consumers’ are recurring themes within the proposed law and is reflected through various provisions that seek to balance the twin goals as against a resolution workout.

Moreover, the Bill integrates the question of liability arising out of deposit claims that are to be insured and protected under the FRDI Bill, including the manner and means of payment of deposit insurance, in the event of a bank failure. It streamlines the procedures for deposit insurance claims and further imposes strict timelines for the disbursal of amounts payable under deposit insurance.

In several ways, the FRDI Bill is a one-stop solution towards the establishment of a veritable resolution framework and a credible deposit insurance mechanism. So what explains the growing suspicion and mistrust towards the Bill? How can one balance the square public denouncement on one hand and the objective of the Bill to protect public interest, on the other? Concerns essentially arise with regard to the apparent power of the resolution corporation to confiscate ordinary deposits for the purposes of effectuating the proposed ‘bail-in’ resolution tool and the diminishing prospects of a government oversight or influence over the resolution corporation. Let’s address these as they are largely misconceived and premature.

While the ‘bail-in’ clause indeed provides for imposing costs associated with a bank failure upon creditors, including depositors of the financial institution, in equal measures, the FRDI Bill stipulates several procedural and substantive requirements that ought to be fulfilled before a bail-in is actualised in practice.

For instance, substantively, only upon a determination by either the resolution corporation or the appropriate regulator (RBI for banks) of a ‘critical risk to viability’ of a particular bank alone, can any of the resolution tools be resorted to.

Thus for banks which are not on the ‘verge of failing to meet its obligations to its consumers’ cannot be arbitrarily put into resolution. Crucially, both at the stage of formulating criteria for such determination and in the event of an actual determination itself, not only is consultation with the appropriate regulator a pre-condition, but any differences of opinion that may arise, has to be resolved in accordance with the procedure under the Bill. Additionally, the corporation has to substantively satisfy itself of the very ‘necessity’ of ‘bail-in’ as against an exhaustive set of indicators and as opposed to other resolution tools.

Procedurally, any resort to the ‘bail-in’ clause has to be preceded by bringing the central government and the parliament on board and keeping both institutions informed at all stages of the bail-in process. Two further significant limitations on the use of ‘bail-in’ tool are the obligation to respect the hierarchy of claims as in the case of an ordinary liquidation procedure and the obligation to ensure that creditors are not affected in any manner worse than they would be in the event of an ordinary liquidation.

Thus, the Bill essentially makes the actual use of the ‘bail-in’ tool considerably more onerous and demanding than it is perceived to be. That apart, several concerns regarding the bail-in clause are in any case rather pre-mature. With respect to crucial details such as the classes or the order in which liabilities of banks will be subject to a ‘bail-in’ and the specific form of new ‘bail-in-able’ instruments that will be issued to investors are all left open to the determination of the resolution corporation through subordinate regulation under the FRDI Bill.

Given that all regulations under the proposed law will have to be laid before both the central government and parliament, the Bill provides further scope for the corporation to devise additional safeguards that might be applicable to a ‘bail-in’ procedure.

Lastly, popular media has distressingly highlighted the Cyprus example as the litmus test for ‘bail-in’. True, Cyprus was clearly a case of a disorderly resolution workout where depositors ultimately lost a substantial portion of their total deposits. However, it is important to note that the ‘bail-in’ in Cyprus was undertaken without any explicit law envisaging a ‘bail-in’ procedure. Equally absent were any set of ex-ante rules or regulations at the EU level laying down any set of procedures or providing for any safeguards associated with such a ‘bail-in’. The European Union Bank Recovery and Resolution Directive (BRRD), which now incorporates rules concerning various resolution tools, came into effect only in 2014, while Cyprus was ‘bailed-in’ as early as 2013.

Therefore, Cyprus is largely an aberration and is certainly not the last word on ‘bail-in’. Given that any resolution framework that is adopted in India will be guided by the rules and regulation framed under the FRDI Bill, apprehensions regarding a similarly muddled resolution transpiring in India is both unjustified and speculative.

Public interest and the government’s role

It is entirely misconceived to suggest that the resolution corporation has been given a free hand, removed from both the scrutiny of the government and the parliament. On the contrary, although the Bill accords much flexibility to the ‘corporation’, especially with respect to operational matters, it nonetheless preserves the preeminent role of the government as the ultimate arbiter of public interest.

Accordingly, as noted above, ex-ante, all regulations and authorisations prescribing for a particular resolution tool, including a ‘bail in’ has to be placed before the government. Correspondingly, under the Bill, the central government has been conferred with explicit powers to give ‘policy’ directions to the resolution corporation and the latter is bound by the same in discharge of its functions.

More importantly, the Bill makes its intentions with respect to the role of the government abundantly clear. It allows the central government to entirely supersede the resolution corporation and assume the latter’s functions if circumstances are such that it makes it expedient to do so in ‘public interest’. Therefore, the Bill strikes a careful balance between, on one hand, according institutional and functional independence to the resolution corporation, and on the other, acknowledges the fact that the fundamental nature of a bank resolution can affect ‘public interest’ in manifold ways that cannot always be anticipated through a purely technocratic approach.

That apart, if all else fails, the parliament acts as an ultimate backstop by scrupulously vetting the rules and regulations that are promulgated by the resolution corporation.

Lastly, much dissonance has ensued regarding the ‘bail-in’ versus the ‘bail-out’ option and the power of the government to infuse public funds to save ailing banks over and above the provisions of the Bill outlining an alternative set of procedures. Importantly, although the Bill prescribes for a comprehensive code for the resolution of financial institutions, it does so by defining the role and mandate of the resolution corporation alone, without affecting the government’s authority to pursue alternative strategies outside the purview of the Bill.

Unlike the Dodd–Frank Act in the US which explicitly aims ‘to protect the American taxpayer by ending bail-outs’ or the BRRD in the EU which circumscribes government bail-outs and permits them only under ‘very extraordinary situation of a systemic crisis’, the FRDI Bill does not forestall the government from using public funds so as to ‘bail-out’ a certain bank or prescribe for any set of limitation on the exercise of such prerogative. On the contrary, the government not only retains its budgetary capacities with respect to recapitalising banks, but is also granted enough latitude under the Bill to effectuate such powers, both within a particular resolution framework or outside of it.

Kanad Bagchi (bagchi@mpil.de) is a doctoral research fellow at the Max Planck Institute for Comparative Public Law and International Law in Heidelberg, Germany, and an associate fellow at the ‘Normative Orders Cluster’ at Frankfurt University.