Shadow banks have dramatically slashed lending following the collapse of one of the biggest, IL&FS, in late 2018. 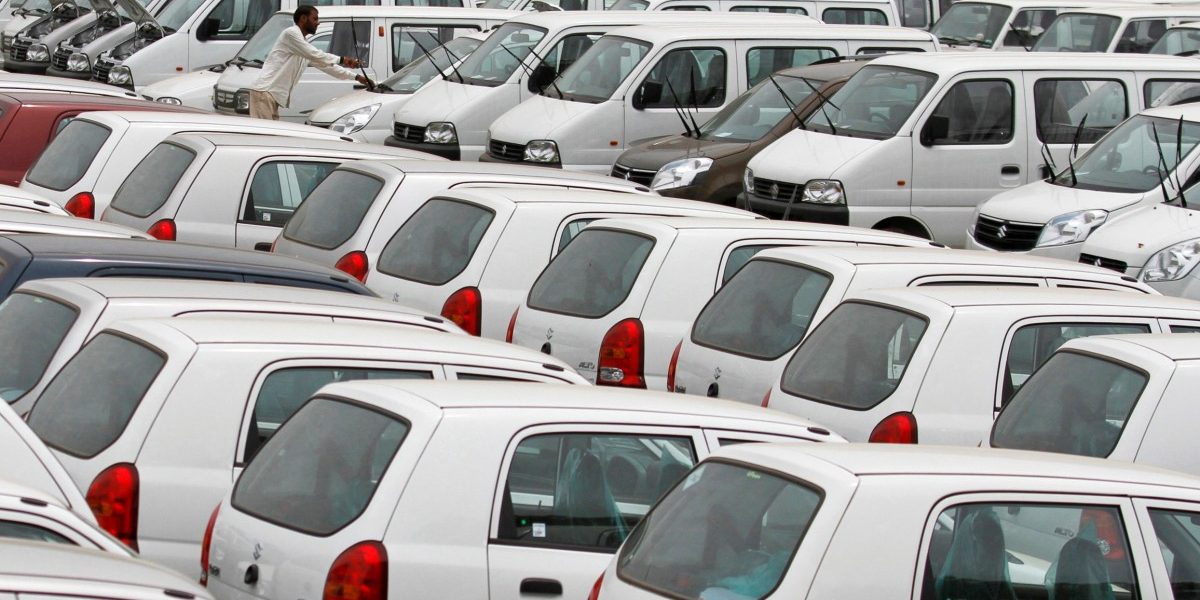 Mumbai: Sudhir Gharpure and his sales team sat chatting at a big Maruti Suzuki dealership on the outskirts of Mumbai some two hours after its doors were opened on a recent Saturday morning – not a single customer was in sight.

“There used to be close to 15-20 bookings each day, but now we’re down to 3-5 on good days,” said Gharpure, the general manager at the dealership.

Gharpure’s experience is not an isolated one. Across India dealerships are being pushed out of business and the Indian auto sector is going through its biggest slump in nearly two decades. Passenger vehicle sales fell for eight straight months until June, and in May sales dropped 20.55% – the sharpest recorded fall in 18 years.

Preliminary data indicates passenger vehicle sales may have plunged as much as 30 percent in July. The slump in India, along with a simultaneous slide in Chinese auto sales, is a blow for automakers wrestling with higher costs driven by more stringent emission norms and a push to develop electric cars.

Unlike in China, where the plunge in cars sales has been caused largely by new emissions rules, India has seen a mix of factors that have combined to erode demand for automobiles. 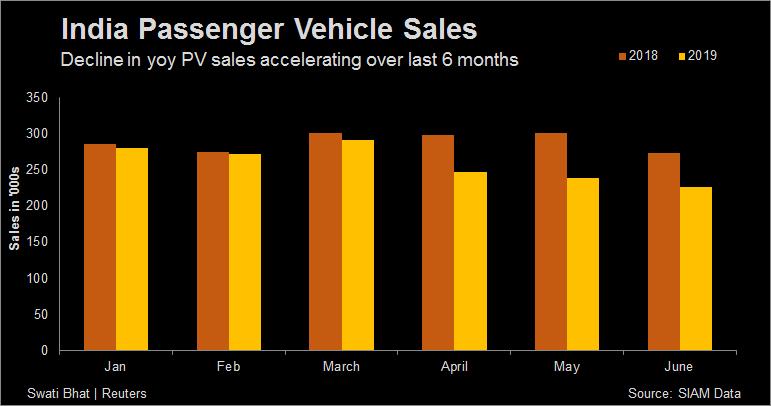 Prime Minister Narendra Modi’s 2016 ban on high-value bank notes, higher tax rates under a new goods and services tax regime, a boom of ride-sharing firms such as Uber and Ola, and a weak rural economy have all played a role.

But many dealers and automakers agree it is a deepening liquidity crunch among India’s shadow banks that has been the biggest single factor in an auto sales collapse, which some fear may lead to more than a million job losses.

Non-banking finance companies (NBFCs), or shadow banks, have dramatically slashed lending following the collapse of one of the biggest, IL&FS, in late 2018.

IL&FS, or Infrastructure Leasing & Financial Services Ltd, was a behemoth in shadow banking and its defaults and unravelling, amid fraud allegations, have dried up funding for rivals and led to a surge in their borrowing costs.

Non-bank or shadow banking firms generate credit outside traditional lenders, by means such as collective investment vehicles, broker-dealers or funds that invest in bonds and money markets.

In India, NBFCs have in recent years helped fund nearly 55-60% of commercial vehicles both new and used, 30% of passenger cars and nearly 65% of the two-wheelers in the country, according to rating agency ICRA.

To aggravate matters, the stress in the autos market has also prompted banks to begin trimming their exposure to the sector.

“The car doesn’t sell, it’s the finance that sells,” said R. Vijayaraghavan, a senior marketing consultant at the same Mumbai dealership. “Today the finance is not selling, so the cars are not selling.” 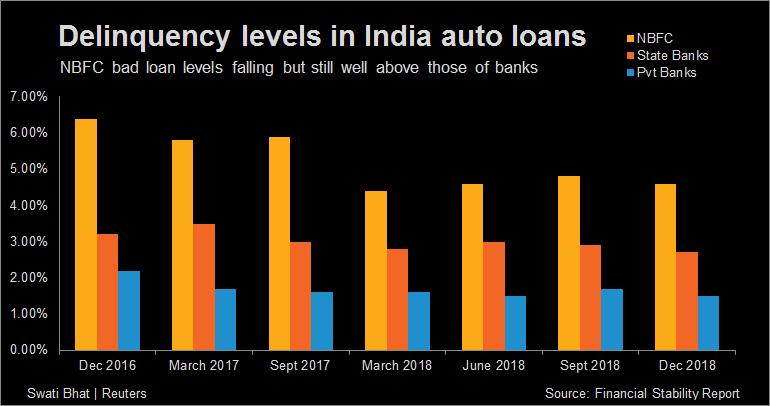 Some 286 dealerships have shut down in the last 18 months across India as rising costs for inventory management have made businesses unviable, according to the Federation of Automobile Dealers Association (FADA), a lobby group of auto dealers.

“The slowdown in the (NBFC) sector has dragged down vehicle sales growth,” said A.M. Karthik, financial sector head at ICRA. “Now the auto slowdown is becoming more visible as the liquidity squeeze continues.”

Automakers including Maruti Suzuki, Tata Motors, and Mahindra & Mahindra are feeling the heat and have either cut production or temporarily closed plants to correct mounting stocks.

According to FADA data, passenger vehicle inventories now stand at 50-60 days up from around 45 days earlier, while those of two-wheelers are even higher at 80-90 days. For commercial vehicles, inventory levels range between 45 and 50 days.

“We are asking dealers to maintain an inventory of 21 days, which is almost half of the current levels,” said Ashish Kale, president of FADA.

At least four dealers from different brands said, however, there was little scope to reduce inventories as automakers were pushing them to buy stock despite there being no demand even with heavy discounting and other sops on offer.

Also read: Has the Stage Really Been Set for Credit Growth and a Banking System Revival?

While 70-75% of car sales were previously financed in-house by NBFC or bank agents sitting at a dealership, that has fallen to about 50%, say dealers, as buyers struggle to qualify under more stringent lending norms put in place by lenders that are under pressure to shore up their books.

Moreover, as many NBFCs typically lent to less creditworthy clients, banks are reticent to rush in to fill the void, as they themselves struggle to cope with an existing pile of about $150 billion in bad loans.

“The banking sector is certainly one of the factors that has affected the growth of the industry,” said R.C. Bhargava, chair of Maruti Suzuki, noting interest rates for car buyers have gone up in the last 12 months despite the central bank cutting rates.

With the autos sector employing more than 35 million people directly and indirectly, and contributing more than 7% to India’s GDP and accounting for 49% of its manufacturing GDP, the fallout from the autos slump is huge and presents a big challenge to Prime Minister Narendra Modi’s government as it begins its second term.

The entire supply chain, from vehicle manufacturers to component makers, are bleeding amid the slump.

“I’ve been making my payments for the last 30 years and the lenders know me,” said Adarsh Gupta, the director of finance at Autolite (India), a component manufacturing firm. “But even a two-day delay has people crying that I will default.

“I too want to pay, but because of the fall in cashflows I’m facing short-term issues and because of that it’s difficult to get more financing. This is the vicious cycle we are in.”

Still, automakers are hopeful of a recovery in the months ahead, helped by the September-December festive season that traditionally sees a surge in consumer spending.

“One can only wish that things improve sooner rather than later. With festive demand starting to seep through, we should start seeing a gradual improvement in sales,” said P.B. Balaji, group CFO at Tata Motors.

Analysts are more sceptical though, and say without vehicle financing becoming cheaper and easier the chances for that are low. With no silver lining in sight, analysts fear bad debts could mount in the auto sector, forcing banks to further reduce their exposure.

“We see market prices and sales coming down so there may be issues,” said a top official at the Indian Banks’ Association. “We could see a spillover in terms of bad loans for the overall sector, but we are going to wait and watch.”

Dealers said they were hopeful of tiding over the current downturn as the broader growth story for India remains intact, but there could be a lot more pain before a recovery kicks in.

“The future is going to be multi-brand car showrooms,” said marketing consultant Vijayaraghavan. “That is the only way for dealerships to survive going forward as overhead costs need to be shared.”