From potentially slashing middle-class subsidies as a method of funding a UBI, to eyeing the RBI's reserves as a means of creating a 'Bad Bank', this year's Economic Survey tackles three pressing issues. 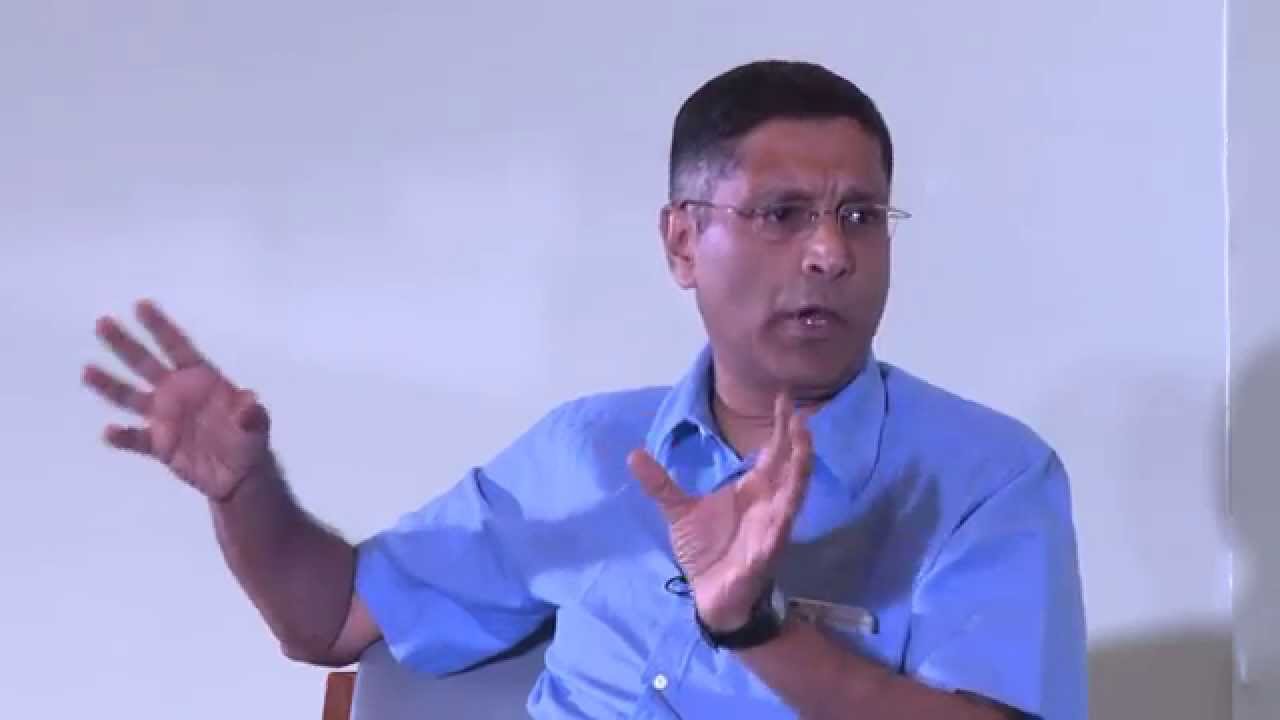 Arvind Subramanian, the architect behind the Economic Survey 2016-17

New Delhi: The Economic Survey, an annual document prepared by India’s chief economic adviser (CEA), has often uncharitably been described as telling us nothing we don’t already know, while refusing to tell us the things we really want to know.

And yet, over the last three years CEA Arvind Subramanian has constructively restructured the flagship assessment of India’s economy, modelling it more on the lines of the International Monetary Fund’s World Economic Outlook. In the past, Subramanian hasn’t hesitated in weaving in his own contentious policy prescriptions: in 2014-15 for instance he proposed easing FDI restrictions in multi-brand retail, which the government at the time had staunchly opposed.

This time around, Subramanian, with his now-characteristic witticisms, has tackled three pressing problems in the Economic Survey 2016-17. Two issues brought on and perhaps exacerbated by the government – demonetisation and India’s NPA/public sector banking crisis.  And another issue that the NDA government hopes will ease over the previous two problems: Universal Basic Income.

Why does the Economic Survey say? The Wire breaks it down.

On Demonetisation: Impact and long-term outlook

The survey’s basic defence of demonetisation runs through the Narendra Modi government’s initial premises as well: India’s economy is overly cash dependent, even if one takes into account that it is a relatively poor country. The higher the amount of cash in circulation, the greater the amount of corruption.

Interestingly, the survey takes a stab at guessing how much of India’s black money is held in cash. For this, it uses the concept of soil rates. The survey notes that while India’s low denomination notes have a soil rate of 33% per year, the soil rate for the “Rs 500 note is 22% and the Rs 1000 note is just 11%”.

“In principle, if a rupee-denomination note and a foreign denomination note fulfil a similar transaction function, then their soil rates should be similar (all else equal). If the Indian soil rate is instead lower, this suggests that a fraction of the notes are not being used for transactions, but rather for storing black money,” it adds.

After comparing and using relative soil rates for the United States, the survey reaches  “an estimate of the amount not used for transactions, and hence potentially black, of about Rs. 3 lakh crore”. “This is substantial,” the survey says, “as it represents about 2 percent of GDP”.

Subramanian acknowledges that demonetisation has had some impact. As the survey puts it, “the question is: how much?”. While the Economic Survey overall places 2016-17 GDP growth at 7.1%, the impact from demonetisation is “between ¼ and ½ percentage points, relative to the baseline of about 7%”.

Why is Subramanian so optimistic? While he acknowledges  aggregate demand and supply shocks, arising as a result of demonetisation, he buttresses his arguments with two points. Firstly, he believes that the “effective level of cash in circulation from November 9th to December 30th 2016” was not as bad as has been made out. This is because:  a) 75% of outstanding  Rs 500 and Rs 1,000 notes continued to be used as legal tender and b) 75% of the Rs 2,000 notes that were issued were liquid. (Note: other economic analyses disagree with how liquid the new Rs 2,000 notes actually were in November and December).

Secondly, the CEA notes, as of January 15, 2016, “aggregate sowing of the two major rabi crops – wheat and pulses (gram) – exceeded last year’s planting by 7% and 15% respectively. And, we still don’t whether demonetisation will impact the expected commensurate “increase in production”.

The Survey also runs through a more classic table of advantages and disadvantages, much of what has already been discussed in the public domain. Advantages of demonetisation include a larger formal economy, lower cash-GDP ratio, increased tax revenue and lower real estate prices.

Universal Basic Income: The Mahatma within

The big, important numbers first. The survey notes that depending on what form of Universal Basic Income (UBI) scheme is carried out, it could cost anywhere between 4% and 5% of India’s GDP.  This, crucially, tallies more closely to economist Vijay Joshi’s estimates.

“[UBI]… is a conceptually appealing idea. A number of implementation challenges lie ahead, especially the risk that UBI would become an add-on to, rather than a replacement of, current anti-poverty and social programs, which would make it fiscally unaffordable. But given their multiplicity, costs, and questionable effectiveness, and the real opportunities afforded by the rapidly improving “JAM” infrastructure, UBI holds the prospects of improving upon the status quo,” the survey says.

The Economic Survey’s logic for UBI is simple: Eleven of the government’s 900 schemes account for 50% of total budgetary allocation. Seven of the top government schemes, the survey claims, suffer from acute misallocation of funds while ignoring the poorest districts in many states.

“For instance, consider the states of Bihar, Madhya Pradesh, Rajasthan, Orissa and Uttar Pradesh: despite accounting for over half the poor in the country, these states access only a third of the resources spent on the MGNREGS in 2015-16. This almost certainly implies that some deserving individuals are left out,” the survey says. 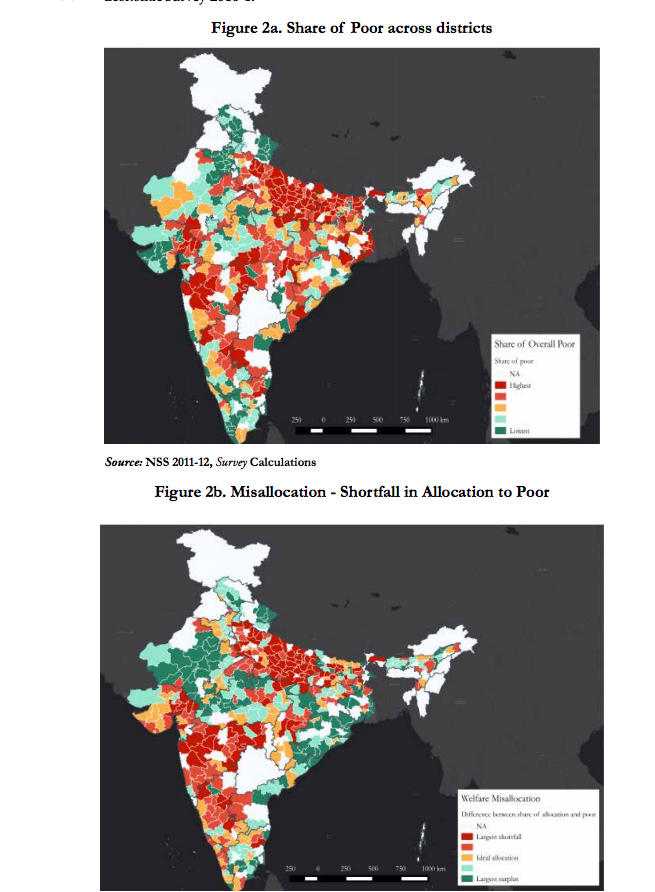 The UBI therefore, as conceived by the Modi government, should primarily “tackle issues related to misallocation”. The survey goes into a great deal of depth over the relationship between the UBI amount, financial inclusion and the cost to India’s banking system. For instance, a UBI of Rs 12,000 per adult per year “is expected to reduce the average distance from the nearest business correspondents to 2.5 km from 4.5 km at about half the UBI amount. This effect is even larger since a UBI is targeted at all individuals, not only adults”.

However, after taking into account poverty distribution, consumption levels and inflation, the UBI for 2016-17 should be Rs. 7,620 per year, according to the survey.

Can and should India’s UBI be truly universal? Subramanian does not think so. “The survey assumes that in practice any program cannot strive for strict universality, so a target quasi-universality rate of 75 percent is set (this is later referred to as de facto UBI). The economy-wide cost is then the UBI number multiplied by 75 percent. This yields a figure of 4.9% of GDP,” it says.

The next question, naturally, is how the UBI will be funded? As The Wire has noted earlier, many critics of a potential UBI scheme have worried that proposing some universal income would be used as an excuse for the Centre to scale back its welfare programmes. Subramanian acknowledges these concerns and points out that while “UBI may certainly be the shortest path to eliminating poverty, it should not become the Trojan horse that usurps the fiscal space for a well-functioning state”.

While the survey doesn’t really provide a solution to achieving the fiscal space required, it notes that middle-class subsidies account for roughly 1% of GDP and that UBI could essentially start off as targeted basic income (TBI) – being rolled out to only rural women for instance.

“If, as it seems, thinkers on both the extreme left and right have all become its votaries, then UBI is a powerful idea whose time even if not ripe for implementation is ripe for serious discussion,” the survey concludes.

India’s public sector banks, and their increasingly worrisome balance sheets, has been a subject of concern for over the last year. As the survey points out, “decisive resolutions of the loans, concentrated in the large companies, have eluded successive attempts at reform”. Post demonetisation, this problem has continued to fester: NPA’s keep on mounting while bank credit and private investment continues to fall.

“At its current level, India’s NPA ratio is higher than any other major emerging market (with the exception of Russia), higher even than the peak levels seen in Korea during the East Asian crisis,” the survey grimly notes.

Subramanian’s approach to the NPA crisis is similar to one that the government was reportedly considering just before former RBI governor Raghuram Rajan left the RBI:  the creation of a ‘bad bank’.

The Economic Survey proposes the creation of PARA – a Public Sector Rehabilitation Agency that would work out “the largest and most complex cases”.

What would this PARA do? According to the survey, it would purchase specific loans (mostly those belonging to over-indebted infrastructure and steel firms) from banks and then start fixing them by converting debt to equity or selling stakes in auction or by granting debt reduction.

“Once the loans are off the books of the public sector banks, the government would recapitalise them, thereby restoring them to financial health and allowing them to shift their resources – financial and human – back toward the critical task of making new loans. Similarly, once the financial viability of the over-indebted enterprises is restored, they will be able to focus on their operations, rather than their finances. And they will finally be able to consider new investments,” the survey says.

This type of centralised bank or agency for bad loans isn’t a new idea: for instance, the US has its Troubled Asset Relief Program (TARP) while countries like Spain and Ireland have agencies into which illiquid and distressed assets have been transferred.

The survey acknowledges that PARA is not a magic bullet. “ Of course, all of this will come at a price, namely accepting and paying for the losses. But this cost is inevitable. Loans have already been made, losses have already occurred, and because public sector banks are the major creditors, the bulk of the burden will necessarily fall on the government (though the shareholders in the stressed enterprises may need to lose their equity as well),” it says.

Where a centralised agency could help, however, is that it separates the onerous loan resolution process from concerns over bank capital.

The next obvious question is of course: from where will the funding for PARA come? Subramanian outlines three possible sources of funding. The first is from government issues of securities; while this could increase the det stock, it may “strengthen the government’s financial position if establishing PARA hastens the resolution of the stressed asset problem”. The second source could be hitting up capital markets, but this would only work if the private sector could be prodded into taking up an equity share.

The final source of funding that could be tapped is the RBI, whereby the central bank “would (in effect) transfer  some of the government securities it is currently holding to public sector banks and PARA.”

The survey is cautious, as it should be, when suggesting this third option.  “It cannot be emphasised enough that any strategy to use the excess capital must be done carefully that in no way undermines or circumvents the relevant laws. It must also be done with the full cooperation of the RBI to ensure that the RBI’s independence and credibility are in no way undermined,” the survey says.

As multiple analysts and commentators have noted, any move to reduce the RBI’s capital was opposed by former governor Raghuram Rajan.