Are India’s Public Sector Banks at Their Nadir?

As the fortunes of our public sector banks appear to go into free fall, a look at what really plagues them. 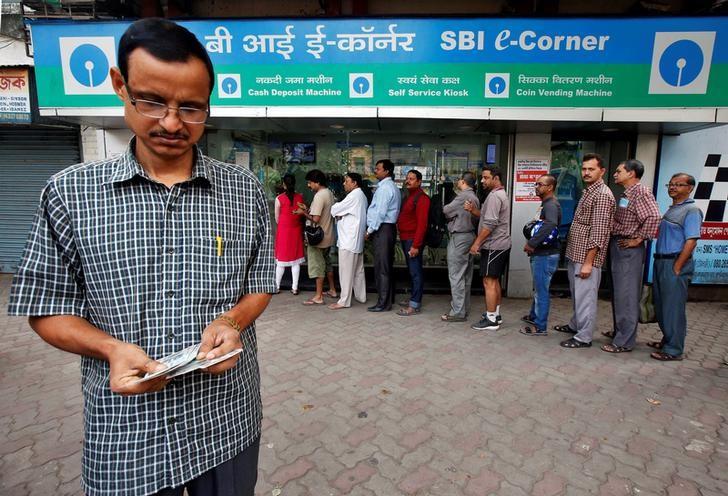 This is the first article in a three-part series.

There were some frequent callers during the year or so that I stood in as the CEO of a public sector bank. Calls from the Reserve Bank of India (RBI) or the Department of Financial Services, finance ministry, were of course routine. But the two persons who stand out in my memory were far from routine callers. One was a junior minister in the government of India, while the other was a leader of one of the major opposition political parties.

Both were polite, but insisted that I could surely find a way of ‘helping’ them. The ‘help’, more often than not, was to be by way of posting an officer at a particular location rather than where the bank was placing them. Sometimes, an officer was recommended for promotion or for shifting out of turn. It was not very difficult to ward off most such requests. But there was one occasion when the minister suggested that we settle a borrower account in a ’compromise’ deal, the request being that we accept the loan principal in the final settlement and not seek to recover interest and other dues, which in this case happened to be equal to the principal amount or more. I found out that, after a lengthy legal battle, the bank had just got its arms around some of the borrower’s properties which would pay for all our dues in full. More importantly, it was patently a case of what we would call a ‘wilful default’: the business failed because the owner’s only interest seemed to lie in making a very fast buck.

When I pleaded inability to comply with the request, the minister assumed a somewhat frosty tone: did I know, I was asked, that there was a Supreme Court order which said that, in the event of a business failure, a bank was not supposed to ask for anything from the unfortunate borrower beyond the loan principal? I expressed interest, and requested that a copy of the said court order be made available to me. When asked why that was necessary, I replied that we would like to examine the possibility, in light of the ‘order’, of not paying interest to our depositors in a year we were not doing too well. After all, if our business was not in the pink of health, maybe we could also interpret the apex court’s order to our advantage?  There were calls from the minister after that also, but this subject was not mentioned again.

Such ‘above-the-table’ interventions can be handled relatively easily. In fairness, they should not take anybody by surprise, either. After all, our politicians need to cater to their own constituencies and, in India, it is a widely-held belief that the system works only under pressure from the powerful. What becomes difficult to deal with, however, is the insidious manner in which large loan proposals are sometimes ‘sold’ to banks. The borrower’s profile may look good – it often does – but at times the project doesn’t. That is where a gentle nudge from up above comes in handy. It is all fair and square – on the surface, at all events – but the subterranean tension is unmistakable.

Why do career bankers, many of whom are perfectly incorruptible in the ordinary sense, give in so often under such circumstances? At the highest levels, there are at least two things in play. One, the CEO is often beholden to the powers-that-be for being where she is now. Two, senior bankers are worried about their afterlife. Very few people who have risen to the top-most rungs of the ladder can countenance with equanimity the idea of a precipitous ‘fall’ after superannuation. Even more than the question of money, it is the sense of power that comes with the position that corrupts the soul. The sudden loss of that power can be a devastating experience for many of us.

There is an even more egregious manner in which the system compromises itself: a plum job in the private sector after retirement. Often, an ex-banker’s usefulness to a private sector client-cum-potential employer is defined by his ability to play the system. After all, he knows the rules of the game quite well, doesn’t he?

When the time came for me to leave the bank, two fairly large corporate groups approached me with similar requests: that I agree to join their boards as an ‘independent director’.  I politely declined, citing my need to turn to my other interests. It was pointed out to me that I needed to invest little time or energy in the board matters. When I still demurred, one gentleman gave up, but the other continued to pursue the proposal for some months. A year or so later, one of the groups turned turtle. There are not a few cases of retired bankers choosing to grace the offices of clients ( some of them, loan defaulters) as their ‘advisers’, ‘consultants’, or directors, plain and simple.

I must hasten to add that lobbying for loans is not confined to our political class. Far from it, indeed. In fact, corporate lobbies are robust enough to stand on their own feet. And they can draw freely upon the skills of institutional loan syndicators and arrangers, some of whose lack of scruples is the stuff of legend. Then there are directors on bank boards who bring their own loyalties to the table. I have, in my time, known at least three directors – two of them representing the GoI, no less – who were unabashed in their lobbying for defaulting clients. What speaks volumes for the ‘respect’ in which the GoI holds the public banks is the fact that it is reluctant to nominate officers above the rank of joint secretary to sit on bank boards. Incredibly, I have even seen under secretaries, in their capacity as GoI directors, rubbing shoulders with bank heads.

But what ensures that virtually every senior banker today  is compromised in some form or another –regardless of his personal ‘stake’ in the whole thing – is something even more basic. Public banks requiring recapitalisation (which today means practically all  of them) are supposed to deliver on the top-lines as well as bottom-lines on their balance sheets as agreed between themselves and the GoI. Budgeting in some cases can be one of the most ludicrous exercises one can imagine. The numbers are set down quite arbitrarily, often with little regard to true potential or even desirability, but once they are there, a banker is held to those numbers endlessly. So, when some CEOs happen to have excellent numbers to boast of, it is only human for another CEO to not want to remain an outlier. He will also try and up his own ‘performance’ suitably and, if he has no axe to grind, there is still personal pride to fight for. (This is the picture of not  the inter-bank matrix alone. The intra-bank picture can be equally gloomy, with peer pressure taking its toll at every level.) Indeed, I have seen fine men and women with perfectly clear consciences plunge headlong into the ‘growth’ vortex with furious energy. It is only natural that, in this mad rush for growth, boundaries will be pushed at some places by some wily players. Besides, supervision and oversight systems can burst at the seams under unwonted pressure.

In a very real sense then, the impasse our public banks find themselves in can be called the growth syndrome. But the malady itself lies well outside the domain of the banking system.

Since the mid-1990s, the growth mantra was being fervently chanted by the Indian economy, and it was inconceivable that the country’s financial systems would remain immune to the charms of this incantation. We have all been tutored to pay obeisance at the altar of the economy’s ‘animal spirits’.

Liquidity has often been plentiful, and there seemed to be no limits to business expansions, diversifications, forward and backward integrations, downstreaming, upstreaming, the works. 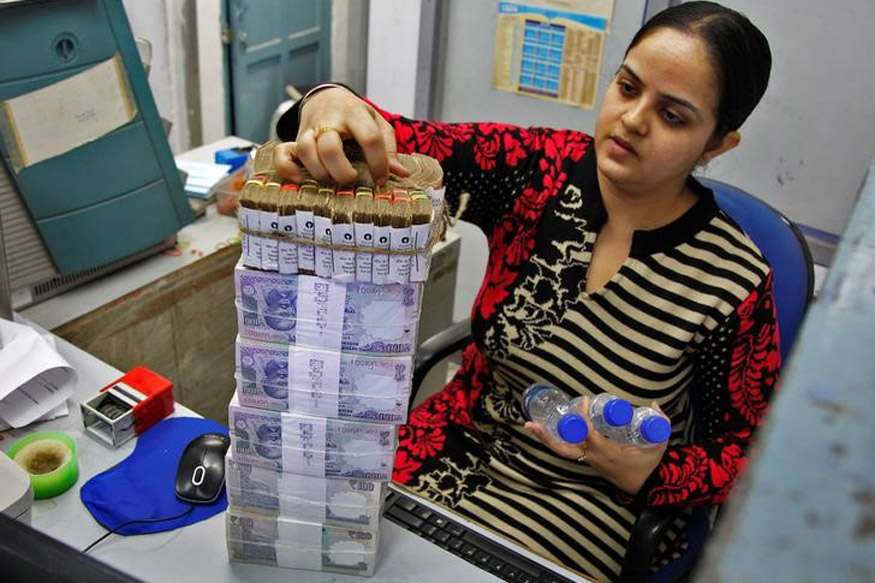 Public sector banks have been tutored to pay obeisance at the altar of the economy’s ‘animal spirits’. Credit: Reuters/Ajay Verma/Files

Everything was par for the course: a food processing company ventured into cement production; a cement manufacturer launched an aircraft chartering business; a brewer invested in both cement and consumer retail; and everywhere, toll roads and cargo ports, and more than anything else, telecom was the new buzz. Corporations went global, buying up overseas businesses at frenetic pace.

As one project was just off the drawing board, three new ventures were conceived with alacrity and banks were flooded with glittering funding proposals. Even as loans to one project were being disbursed, the project’s promoters  unleashed a battery of loan arrangers for their second, third and fourth ventures – and obtained bank loans for all four much before even the first enterprise had got off the ground. The promoter’s margin for project number two was freely funded out of bank loans to project number one, that for number three out of borrowings raised for project number two, and so on and on. While these charming  Ponzi-like schemes played out, there was barely a murmur from the RBI or the ministry of finance, who had every reason to look askance at this break-neck pace of credit expansion. Over-invoicing of imports and its obverse, the under-invoicing of exports, became much the norm in many sectors but every regulatory/investigative authority looked the other way.

God was sure in his heaven and all was right with the world.

Ironically, the 2008 American meltdown came in handy for much of corporate India. As the country furiously patted its own back that India  had managed to stay clear of the global carnage, more loans were pumped into projects so that they did not come to grief. Repayments were staggered, sometimes deferred eternally, and ever-greening became respectable. When push inevitably came to shove, many stars of India Inc. threw up their hands, pleading business failure. The fact is, some of them not only had no stake in the businesses they had borrowed against, they had also made neat piles into the bargain already.

Why did public banks get far more terribly hit by these shenanigans than private banks? Primarily because the GoI, these banks’ main owner and the arbiter of the bankers’ destinies, wanted them to lend generously, with eyes tight shut if necessary. Private banks in the main steered clear of infrastructure projects, pleading (legitimately) funding mismatches, though it did not stop some of them from syndicating/arranging some of these same loans and hard-selling them to public banks. Another factor was the private banks’ relative ability to exit a dubious exposure sooner than public banks, partly because of the latter’s habitual heavy-footedness, but also because private banks typically vibe better with industry houses and register the warning signals somewhat sooner.

It took the labours of a Raghuram Rajan (former Governor, RBI) to foreground some of the issues swirling around our public sector banking space. But that, and how the RBI had first shot itself in the foot before staggering back up again, is another story.

Anjan Basu worked for over three decades for one of India’s largest commercial banks, inside the country as well as outside it on overseas assignments.