The first phase of the UP government's much-hyped crop loan waiver has turned into another farce for farmers. 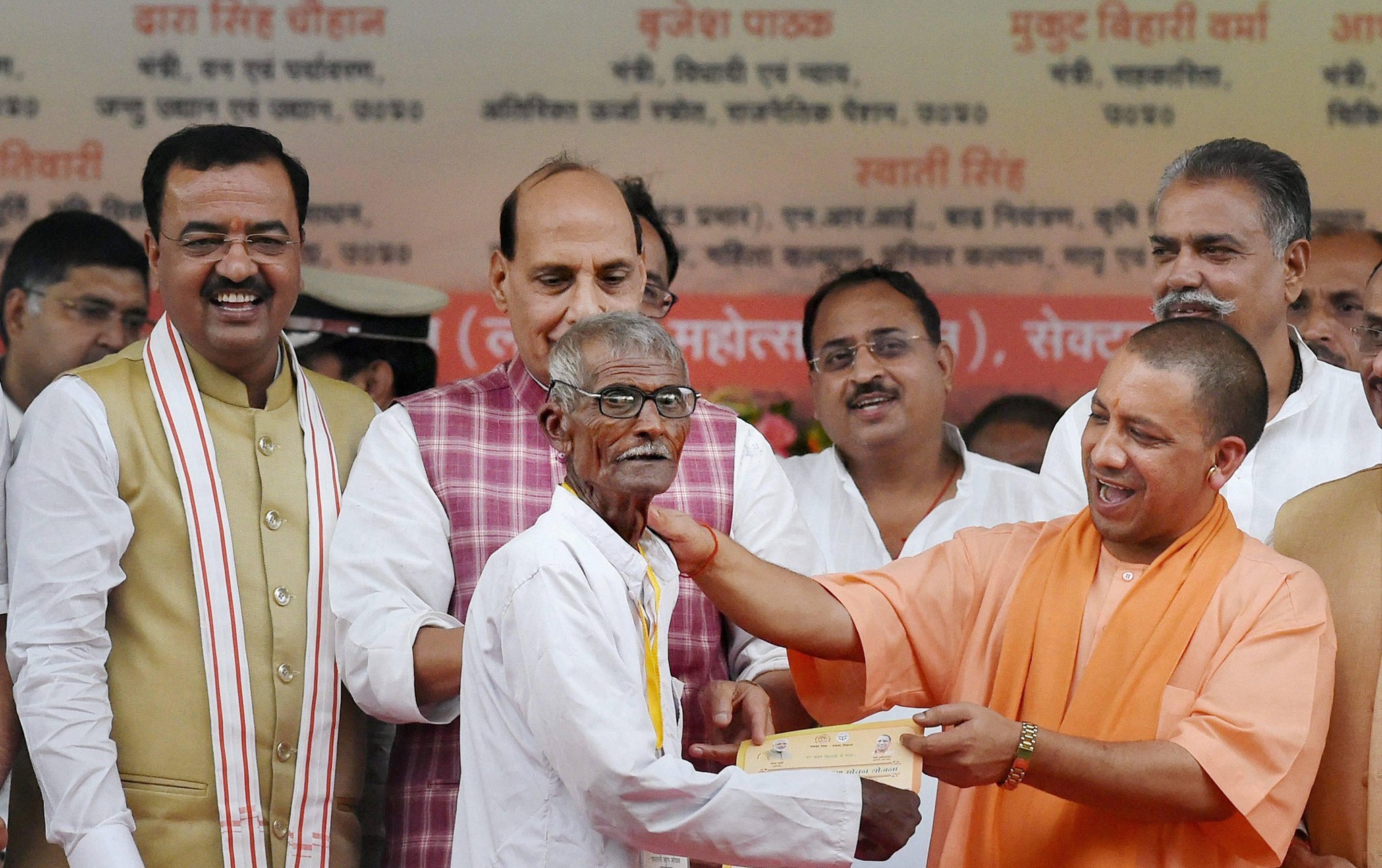 UP CM Yogi Adityanath (right) with a farmer. Home minister Rajnath seen at the back. Credit: PTI

Only six months into power and the Adityanath-led BJP government in Uttar Pradesh is already in hot water with a series of controversies emerging one after another.

Facing flak for the deaths of children in a hospital in Gorakhpur last month, as also for the insensitive “children die every August” remark by state health minister Siddharth Nath Singh, the state government kicked up another storm when the first phase of the much-hyped crop loan waiver scheme turned into a major farce for farmers.

The state government had earlier announced that under the scheme, crop loans up to Rs 1 lakh will be waived off for small and marginal farmers. However, as cabinet ministers ceremoniously distribute loan waiver certificates to farmers across districts, it turns out that many of the beneficiary farmers have received waivers of amounts as petty as Re 1 or Rs 1.50.

A farmer in Etawah’s Aheripur village, who took a loan of Rs 28,000, received a waiver of Rs 1.80. While another farmer in Mukutpur who borrowed more than Rs 2 lakh got a waiver of Rs 1.50. In another case reported from Bijnor, Baliya Devi got a loan waiver of a mere 9 paise.

In a ceremony organised at Hamirpur, the labour and employment minister handed over a loan waiver certificate for the amount of Rs 215.03 to farmer Munni Lal who had borrowed Rs 50,000. When he complained about it, the minister evaded this citing a typing error. However, it became soon became clear that it was no typo. In Mirzapur, farmers staged a protest before state finance minister Rajesh Agrawal against this fraud move of the government.

The state government is now offering all sorts of excuses but none worth buying. The farmers, on the other hand, blame more than the government. The administrative system, they believe, usually works against their interests and does not change with a change in power.

When Akhilesh Yadav was in power, a similar thing had happened when drought-hit farmers were handed over compensation cheques of amounts between Rs 2 to Rs 150. It was then blamed on insensitive evaluation of crop damage by the lekhpal. Now, bank officials are being held responsible for the loan waivers. The final blame, however, falls on the government.

Also read: The Indian Farmer is Protesting About Much More Than Loan Waivers

When the government announced the loan waivers, some deceitful bank officials included names of such farmers in the list too in order to increase the number of those seeking to benefit from the scheme.

On the other hand, a bank official said that the loan waiver scheme has several terms and conditions. One is that only loans borrowed till March 31, 2016, will be waived off. This has left farmers who were unaware of any such condition disgruntled.

The incident has sparked a back-and-forth blame game and the BJP is yet to deliver on the electoral promise of loan waivers. It was in the run up to the assembly polls that Prime Minister Narendra Modi promised that if BJP is voted to power in the state, loan waivers will be the top priority at the first cabinet meet. The promise turned out to be effective and got votes for the BJP. However, to avoid making it seem like they had failed the voters, the Adityanath-led government delayed the first cabinet meeting to put off any decision on loan waivers. Later, the Centre refused to offer money, which forced the government to use state resources.

For this, an arrangement of Rs 36,000 crore was made in the budget and it was claimed that it would benefit 86,000 farmers. Subsequently, while on the one hand the state government began implementing the loan waiver scheme in the unfortunate manner that it did, on the other hand, it attracted the attention of farmers in several other BJP-ruled states and they began demanding waivers for their loans too.

In Madhya Pradesh, Maharashtra and Gujarat, farmer protests even turned violent. To deal with such scenarios, the Modi government ought to have come up with a national policy but it failed to do so which forced several states to follow in UP’s footsteps.

However, Tamil Nadu farmers have not yet been able to have their demands fulfilled even after several months and methods of protests.

The only good that has come out of the farcical episode of loan waiving which brought extensive embarrassment to the Adityanath-government, is a renewed debate around several aspects of loans waivers to farmers.

Also read: India Owes a Debt to Its Farmers

Senior Gandhian journalist Kumar Prashant says, “If we really want to improve the lives of farmers, we need to get rid of the loan system and develop a model of agriculture in which there is no need for a loan.”

According to Swaraj Abhiyan leader Yogendra Yadav, instead of loan waivers, farmers need loan riddance along with a guarantee of income or full price for the crop. But the Modi government, which came to power on the promise of implementing Swaminathan’s recommendations, has turned a blind eye to it.

Yadav says that governments have appropriated thousands of crores of rupees from farmers over the last 50 years. In the name of increasing food production after the 1966-67 famine, the interests of farmers were ignored and the prices of their produce were suppressed to keep food grains from becoming expensive.

In addition to this, the burden of subsidised food to the poor was also passed on to farmers. It is now time for farmers to be paid back – and they ought to be given not just loan waivers but guarantee of income. Call it compensation and not a gift.