Many women travelled to New Delhi on Monday to highlight the issues that families hit by farm debt face.

New Delhi: Expectations from the upcoming Union Budget are high but there is one section of society that is raising its voice for the first time: Widows of farmers who took their lives due to farm distress and unpaid farm loans.

Some of them travelled to New Delhi on Monday in the hope of catching the attention of Union finance minister Nirmala Sitharaman, seeking a robust rehabilitation and resettlement (R&R) package in the Budget for widows of farmers and farm labourers.

Many of these women struggle to raise their children in a chauvinistic society that prevents them from getting the land that their deceased husband’s held or a share in joint property. Without governmental or societal support and no means of livelihood, more often than not, they are left to fend for themselves and their children.

Without land ownership, a farmer’s widow does not become eligible for loans, insurance and other farm subsidies. In many cases, they are unable to send their children to school and force their young daughters into hasty marriages. They themselves are subjected to sexual abuse within the family and also from money lenders and others in the chain they turn to for help.

An issue for lakhs of women

These are problems that lakhs of women in the country face. Official data compiled by the National Crime Records Bureau (NCRB) shows that between 1995 and 2016, 332,798 farm suicides occurred in India. Around 94% of these were by men. In the same period, about 19,968 women farmers took their lives.

A recent study commissioned by the Union Ministry of Agriculture and Farmers’ Welfare reports that the highest number of women farmer suicides have been in Telangana, followed by Gujarat, Tamil Nadu and West Bengal.

During a national consultation on Status of Women Farmers from Farm Suicide Families, activist Kavitha Kuruganti put the figure of farm women suicides at 50,000 during the same period. She added that even by official estimates, there are over three lakh widows who are forced to manage their homes and farms, apart from coping with unpaid debt.

Veerpal Kaur, a widow, asked, “Just let me know for how long should I wait? Will I ever get any monetary assistance from the government or are all these false promises?” Weighed down by debt, her husband, father and father-in-law, died by suicide in their village of Mansa in Punjab. To raise issues of farm debt and widows, she unsuccessfully contested the 2019 Lok Sabha election as an independent candidate in Bathinda. 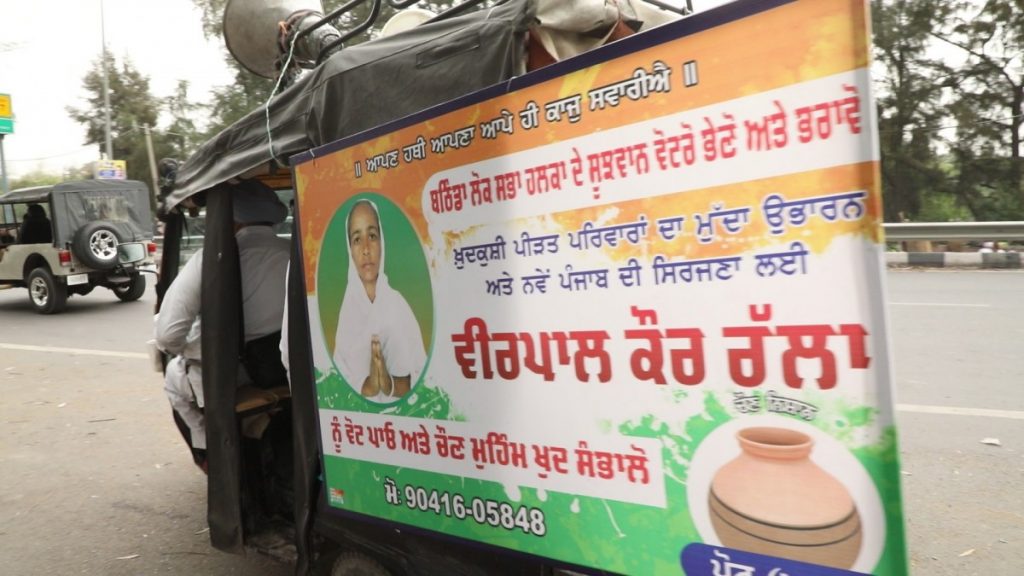 Also read: Farmers’ Suicide Dictated Her Marriage, and Now Drives Her to Fight an Election

A new phenomenon that is emerging is that of young unmarried girls in distressed families taking their own lives, seeing themselves as an “additional burden” on their parents in terms of marriage-related costs. In Karnataka, there have been instances of farm distressed husband and wife killing themselves at once.

During a farmers’ protest rally in New Delhi two years ago, Kantabai Pandurang Bhuse from Latur district in Maharashtra choked on her words as she spoke how her teenage daughter dying by suicide so that her debt-ridden family did not have to worry about dowry. “By taking my own life, I am relieving my parents of their agony. Being small farmers in debt, they will not be able to arrange my dowry from the daily wages my father earns,” the school-going girl wrote in her suicide note.

“States do not want to acknowledge farmers’ suicides”

Seema Kulkarni of Mahila Kisan Adhikar Manch, which organised the event with UN Women and Swissaid, said some states do not want to acknowledge farmers’ suicides and don’t have any policy to support the widows. “Andhra Pradesh has just begun providing compensation of Rs 7 lakh to affected families. On the other hand, Maharashtra, which has the largest number of farm suicides, gives only Rs 1 lakh ex-gratia. Telangana has, on paper, compensation of Rs 6 lakh after it subsumed farm suicide cases into an insurance scheme called Rythu Beema Padhakam. Punjab is performing abysmally by systematically ignoring farm suicides and leaving the women to cope with the aftermath of the suicide on their own. There are numerous cases of multiple suicides within the same family in Punjab,’’ she explained.

Authorities present at the meeting made suggestions they thought would help farm widows. Deputy chairperson of Maharashtra Legislative Council Neelam Gorhe stressed the need for a formal support system, counselling and rehabilitation of vulnerable farmer widows. Punjab agriculture commissioner B.S. Sidhu called for a national policy to provide relief to families of farmers who end their lives due to unpaid loans.

To this, the Centre might well say that it is working towards reducing input costs, better marketing and doubling farmers’ income so that they come out of debt.

The irony is that political parties have been coming to power after promising to waive loans. In Uttar Pradesh, Punjab, Madhya Pradesh, Chhattisgarh and Rajasthan, this promise played a decisive role in a party winning the election. States like Telangana, Tamil Nadu, Karnataka and Andhra Pradesh also announced farm loan waivers in different forms.

In 2008, the United Progressive Alliance government at the Centre gave a loan waiver package of Rs 60,000 crore for small and marginal farmers and 25% rebate to other farmers who paid off their dues. It won a second term in 2009.

Be that as it may, women farmers and widows of farmers who ended their lives out of distress are looking for recognition in government data. They are seeking succour in the Union budget, which will be presented in parliament on February 1.

Gargi Parsai is a senior journalist based in New Delhi.