Why Women Farmers in Telangana Are Taking Their Own Lives

Crippling debt and inadequate infrastructure often drive women farmers to the point of no return. 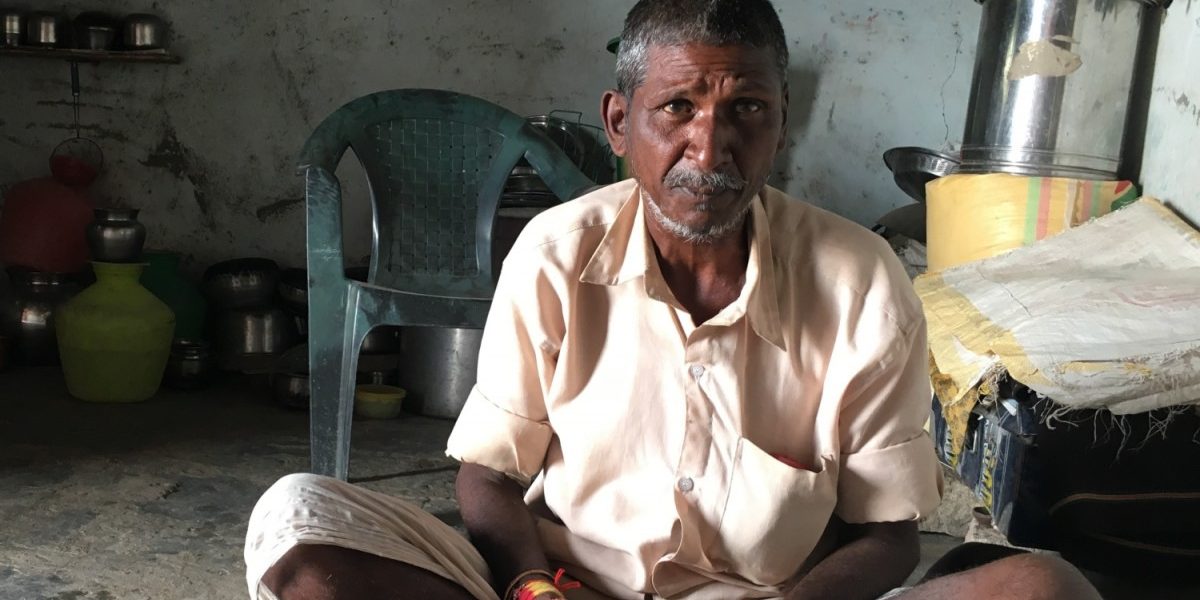 Bakkana at his house in Ghanpur, Wanaparthy.

The darkness in the single room house in Vinjamur village of Nalgonda district was not the kind that would be dispelled by light. In August 2017, Nagilla Yadamma had killed herself there.

Yadamma was a farmer with four acres of land, on which she grew cotton, spending Rs 20,000. In 2016-17, the minimum support price for her product had been Rs 4,160 per quintal, but the next year it fell to Rs 3,000. With her yield of two quintals, Yadamma was unable to recover even half of her expenditure. Under pressure to repay debts, that morning, she drank an organophosphorous pesticide.

Shanker, her 26-year-old son, rushed her to a hospital in Hyderabad, 80 km away. Half the distance was over unpaved road. She died eight days later, on August 28. 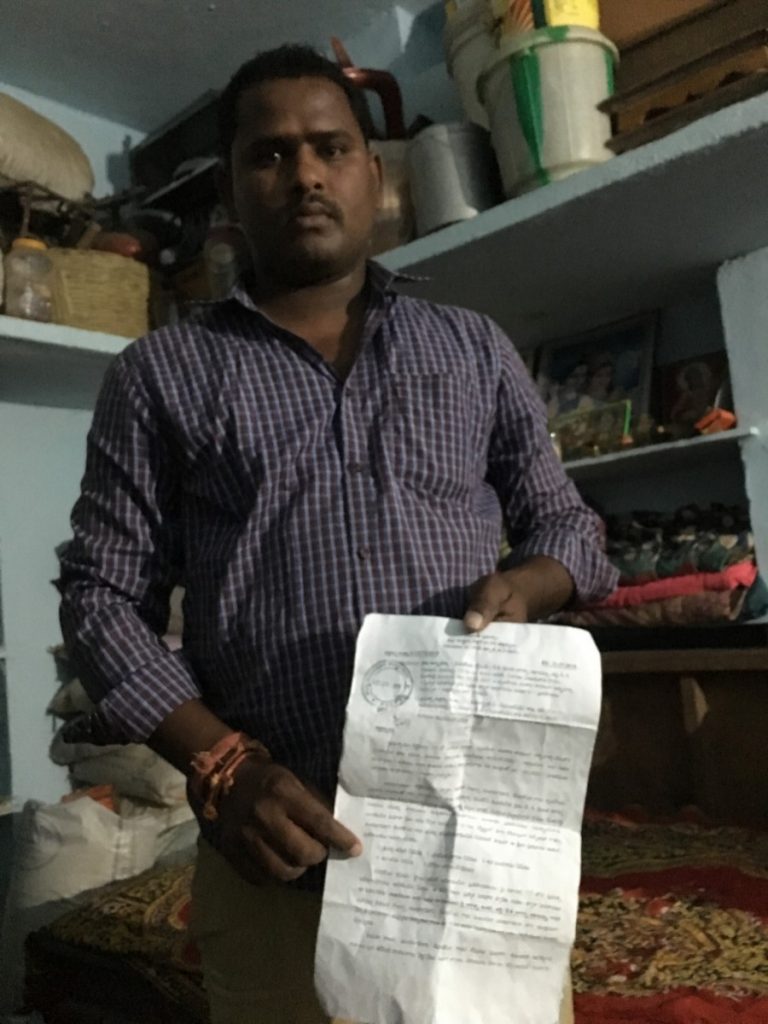 In 2013, Shanker had lost his father, Niranjan, after a prolonged illness that left the family even deeper in debt. Shanker has still not reconciled to his mother’s death. “My mother had always managed our household, and after my father’s illness, she took care of the farm,” he said. “We never thought she could be under such stress, or would kill herself.”

Telangana is one of the six states in India where the most farmer suicides occur. It is second after Maharashtra for suicides by women farmers. According to the National Crime Records Bureau, there were 232 women farmers’ suicides in Telangana in 2014 and 159 in 2015.

Yadamma’s life, and death, were characteristic of her district.

Yadamma’s four acres were rain-fed, supported by a tube-well 300 feet deep. This dependence on groundwater is common in Telangana, due to its sparse irrigation infrastructure. Nalgonda district has the second-highest area irrigated by tube-wells; after Mahabubnagar – those are also the two districts with the highest number of farmer suicides in the state.

Yadamma had outstanding private loans of over Rs 3 lakh. As in her case, nearly 50% of the credit extended to rural households comes from private moneylenders, according to the Telangana Social Development Report 2017.

Yadamma had had no education, but saw to it that her daughter Ranjitha finished Class XII. Ranjitha could not find a job, however, and remains a married homemaker.

Yadamma’s two sons – Seenu and Shankar – finished Class IX and X, respectively, and work as a labourer and a driver. The family survives on non-farm income, while agriculture only dragged them down in debt, Shanker said.

“There is no irrigation scheme in the vicinity. Nothing but rains support the crops,” he said. “The best option for farmers is to sell the land and find an occupation that, at the least, helps them live.”

“Last elections, they said that once Telangana was formed, we will get the jobs that go to the people of Andhra,” he said. “We will get the funds that have been diverted by Andhra. Four years later, neither have our problems changed, nor are there any solutions.”

Yadamma kept the family rooted to the farm and to their identity as farmers. Without her at the head of that household, it was adrift – uprooted from the village and from agriculture, probably forever.

‘Her death was not surrender – it was protest’

In the Wanaparthy district, a hill casts a shadow over Khila Ghanapuram village, where Jogu Savaramma, 45, had lived with her husband, Bakkanna. They had a half-acre of land in her name, and three acres in his.

They were married thirty years. “She used to manage everything, the crops, the labour, the house and the children,” Bakkanna said. “I was never as good as her. The land was rain-fed, there was no tube-well, and no other source of irrigation. We survived some very difficult times.”

A few years earlier, he had fallen ill, and they had to sell their goats to pay Rs 1 lakh for their medical treatment.

By 2015, they owed outstanding loans to the tune of Rs 12 lakh, Bakkanna said. “Loans were not repaid for several years. We needed the money for agriculture, the children’s marriages, to build a house. We always hoped that we would repay with the help of a few good crops. Those good crops never came.”

In September that year, Savaramma had organised labour to harvest the cotton crop. That morning, after they visited the farm together, she went missing.

“I looked for her everywhere,” Bakkanna said, his eyes welling up. “Then someone found her and when I reached, I knew she was already dead. I couldn’t even ask her why, I don’t even know what poison she took.”

The state government disburses a compensation of Rs 6 lakh to the family of farmers who kill themselves due to crop failure and unpaid debt. After Savaramma’s death, most of that money went to pay off their loans – but a debt of Rs 40,000 is still outstanding in her name.

They belong to a weaver community, and Savaramma was an expert at spinning yarn to weave gongalis, the local rugs. Each gongali sold for Rs 800-900 in the winter, and they made about three every month. The loom is silent now. “Who will make the yarn the way she used to?” Bakkanna asks. He holds the spinning tool, as if he could still feel her touch on the metal. He has leased out all the land as well. “I cannot farm without her,” he said.

Manne Chennamma had been like a ray of hope; her death was not a surrender – it was a protest.

In Laxmipally village, women gather around the tap where the water slowly fills one container per hour. They tell stories of Chennamma’s strength in the face of hardship.

Chennamma was from a poor family, and had no education and no land in her name. Still managing to find financial support for agriculture, she leased six acres of land and borrowed money to plant groundnut.

The lease was cheap because of the poor water situation. Five years ago, groundwater was at 180 feet – now it is 230 feet. The couple had to spend Rs 35,000 to deepen the well. “Even then, with tube wells, it takes too much power to draw up the water,” her husband Krishnaiah said.

Without access to irrigation schemes, they had no choice. Audit authorities in Telangana have pulled up the state government for delays in these projects. Other schemes, like the Rythu Bandhu –a direct cash transfer per acre – benefit larger farmers more than struggling, marginal cultivators.

“That afternoon as we spoke, we ate from the same vessel. It was strange because we never did that before. It was like a farewell.”

“We already knew the state of the crop was bad and the yield would be too little,” Krishnaiah said. Chennamma knew that her debt of Rs 1.5 lakh could not be repaid and the debt would grow unsurmountable.

Krishnaiah left to spray the field with pesticide. At home, Chennamma drank it.

Kota Neelima is an author and researcher. Her latest book is Widows of Vidarbha, Making of Shadows, Oxford University Press, 2018.